There is something so eye-catching about white cats. These angelic felines typically have baby blue eyes you can get lost in, and some even remind us a bit of oh-so-cute bunny rabbits. For Little Louie, he was once just a lonely shelter kitten with an unfair death sentence. Scheduled to be euthanized before even reaching six months of age, this adorable little white feline had fate on his side.

Thankfully he was plucked from that high kill shelter, and given a chance to find his happy ending. So, Louie is living proof that rescuing truly does save lives, and that sometimes in life, the most rare and beautiful cats of them all are right at your local animal rescue. 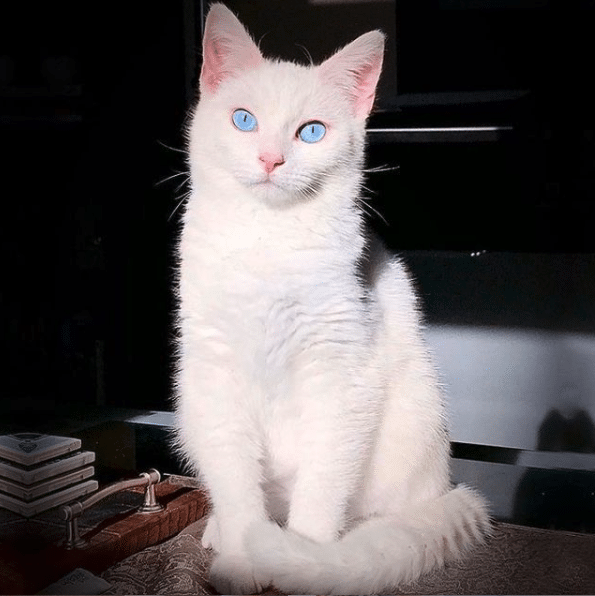 Little Louie as a wee kitten! 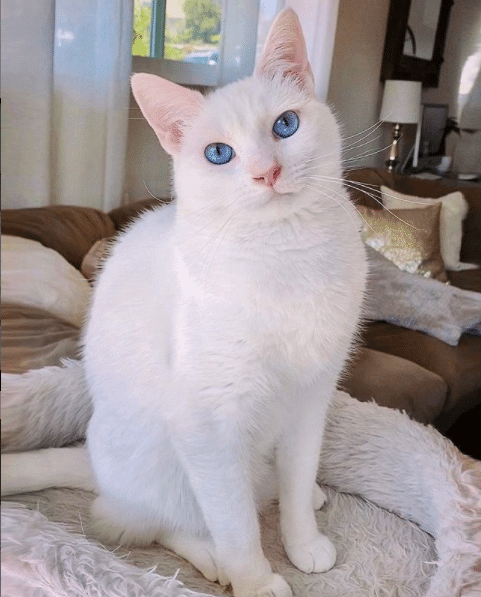 How did Louie come into your life?

I had just lost my kitten Gerald to FIP a few months earlier and was visiting the shelter to cheer me up as I had been doing pretty regularly. I had been wanting to bring home a new little boy, but was terrified of having to deal with FIP again. A foster mom came in with a carrier of kittens ready for adoption, two girls and a boy. Someone there was looking for girls and took them out leaving the boy. I reached in and took him out looked into his big blue eyes and immediately fell in love. I sat with him for a few hours contemplating what to do. I was scared but I could not part with him. Obviously he was too hard to resist and came home with me. 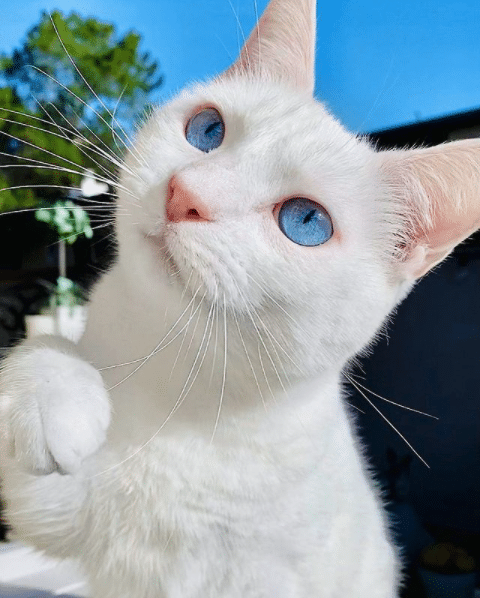 Louie seems pretty rare for a shelter cat, do you know anything about his background or his cat ancestry?

I know very little about his background. He ended up in a high kill shelter at 4 months old. He was scheduled to be euthanized when the Nine Lives Foundation came and rescued him. He spent a few weeks in a foster home before I found him at the rescue. 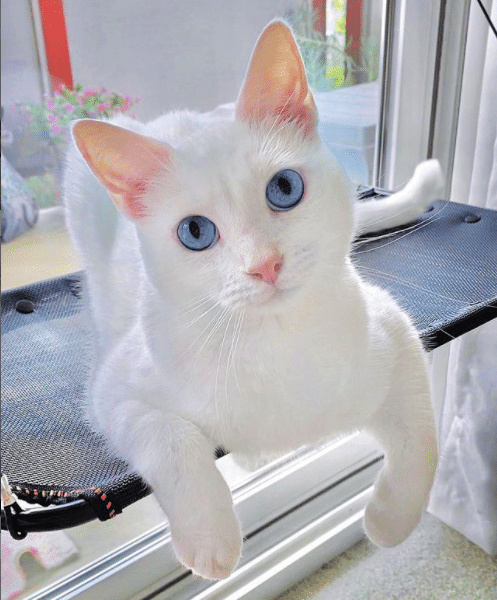 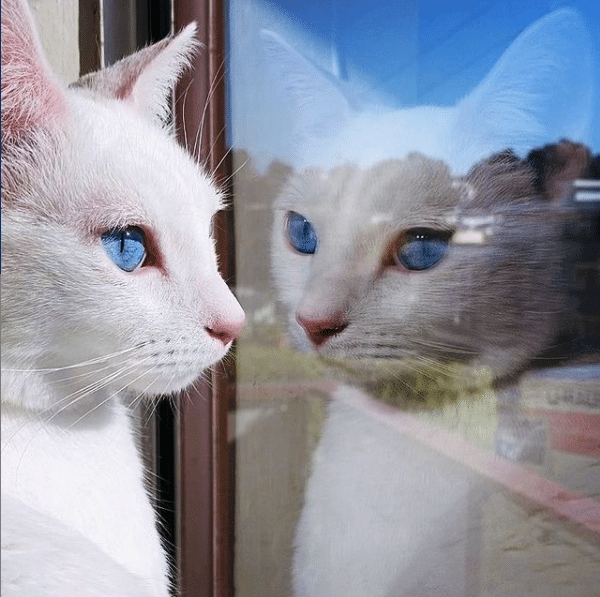 Louie is very complex. Highly sensitive, independent and a thinker. For the most part he is very chill, but his happy and mad tend to be extreme. Loves to give kisses and hugs to his favorite humans, but don’t get on his bad side or the little devil comes out. 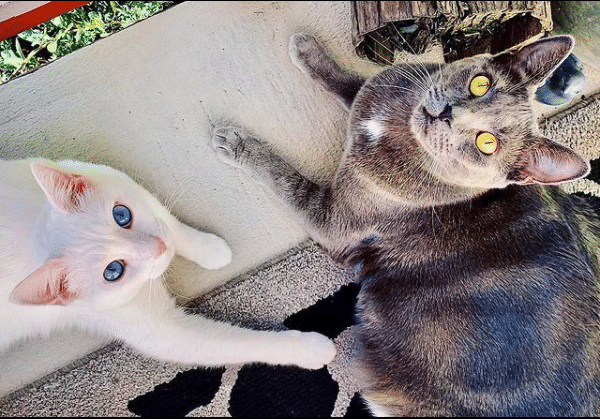 How does he get along with his cat housemates at home?

Him and his younger brother Jimmy are best friends and have been since they met. Like true brothers they do fight over things daily though. And they both get timeouts. He adores his big sister Samantha and grooms her head every morning. He also likes to chase her. She likes neither of these things.

His favorite thing to do is chase hummingbird shadows. He also loves chasing the laser dot, water droplets and bugs. 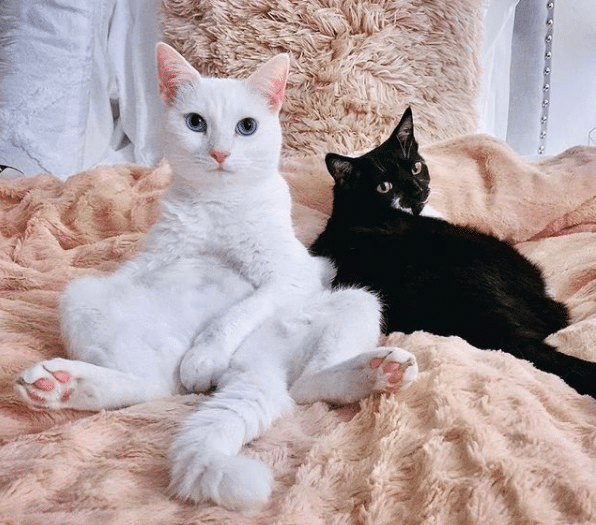 What’s something special you’d like people to know about Louie?

According to his animal communicator, Louie is a very spiritual being who has lived many lives. Has also lived a past life with me which explains why I felt such a deep connection with him immediately.

I’d like to give a special “thank you” to Kristin, Louie’s cat mom, for taking a chance on this beautiful cat. It’s people like her who are making the world a better place for cats in need of homes! If you’d like to see more of this beauty, check him out on Instagram here. 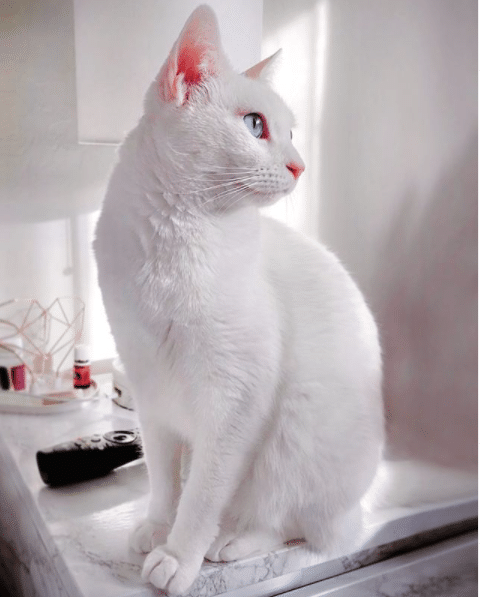 Can’t get enough of white cats? Learn all about them here on CattitudeDaily.com.

Feline 411: All About The Balinese Cat Breed