Street Kitten With Heterochromia Lands Himself A Forever Home Fast

I could look at images of cats’ eyes all day long. No matter the color, each cat has eyes that appear like orbs of endless beauty just begging to be admired. And this is especially true for cats with heterochromia. This beautiful odd-eyed phenomenon is most common in white cats, so it’s definitely a head-turner when we see heterochromia in cats with darker coats!

For one little black-and-white cutie pie named Raymond, he is totally adorable and immediately grabs your attention. And, thankfully for him, he found himself a forever home in no time flat thanks to his unique appearance. The busy city streets are a dangerous place for a kitten, and not long after he was picked up, he found his happily ever after. And, as they say, the rest is history! 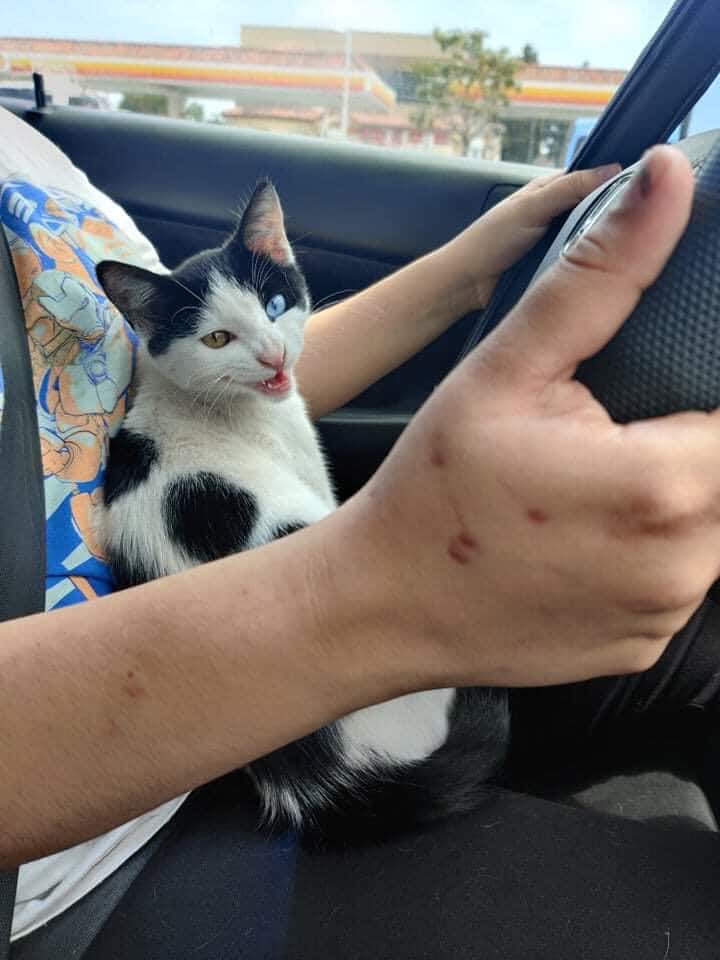 I caught up with his foster cat mom, Giselle, who shared with me some more details about this cute cat. Giselle also shared with me that she’s part of a pretty awesome organization in her area called Maid Academy Cafe. She and other members of the group lend their talents to “raise money for stray and feral cats like Raymond. Keeping them safe, fixed, and potentially housed.” 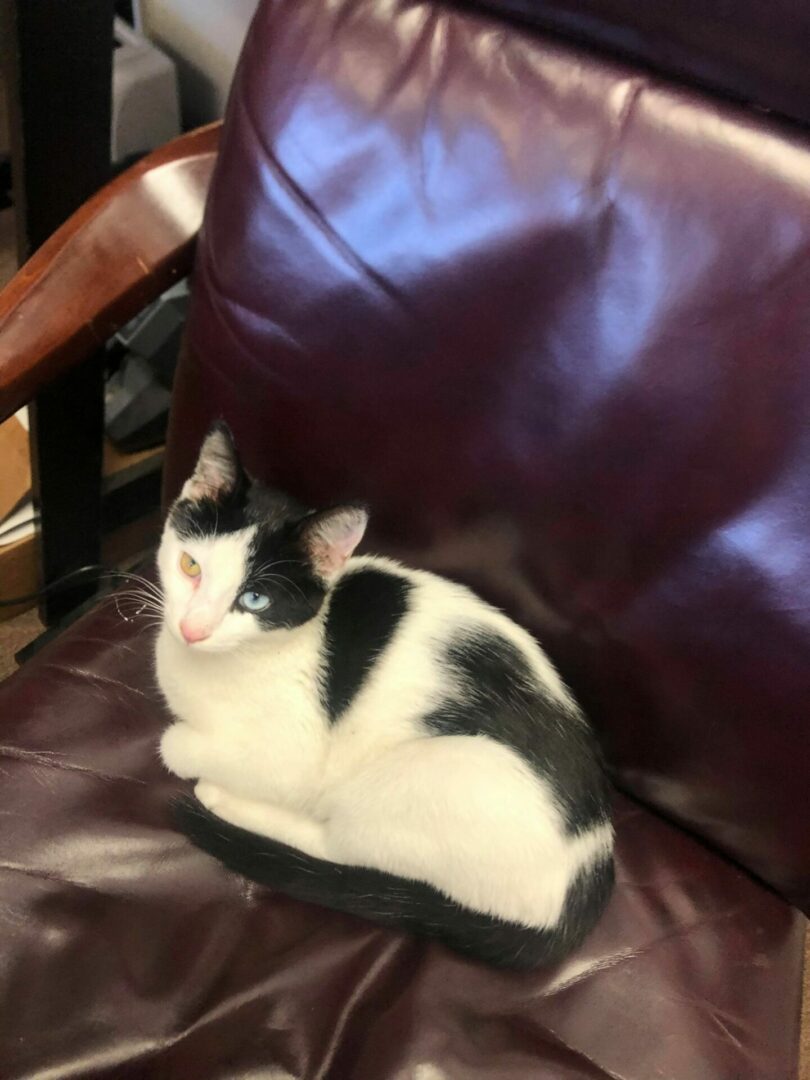 How did he come into your life?

Raymond was found on the streets of Santa Ana, California crying for help, when I picked him up he was filthy and wanting to be carried. Purred like a motor. The next day we took him to the vet and noticed no microchip. I personally foster and TNR cats in Orange County so he became a foster. As soon as we posted his photo and everyone saw his eyes he was so popular and a hit! After several applicants, we narrowed it down to him finding a home with a friend in Torrance! He will be staying with me until he is neutered and ready to leave.

His foster name is Raymond after the cat with Heterochromia in Animal Crossing. 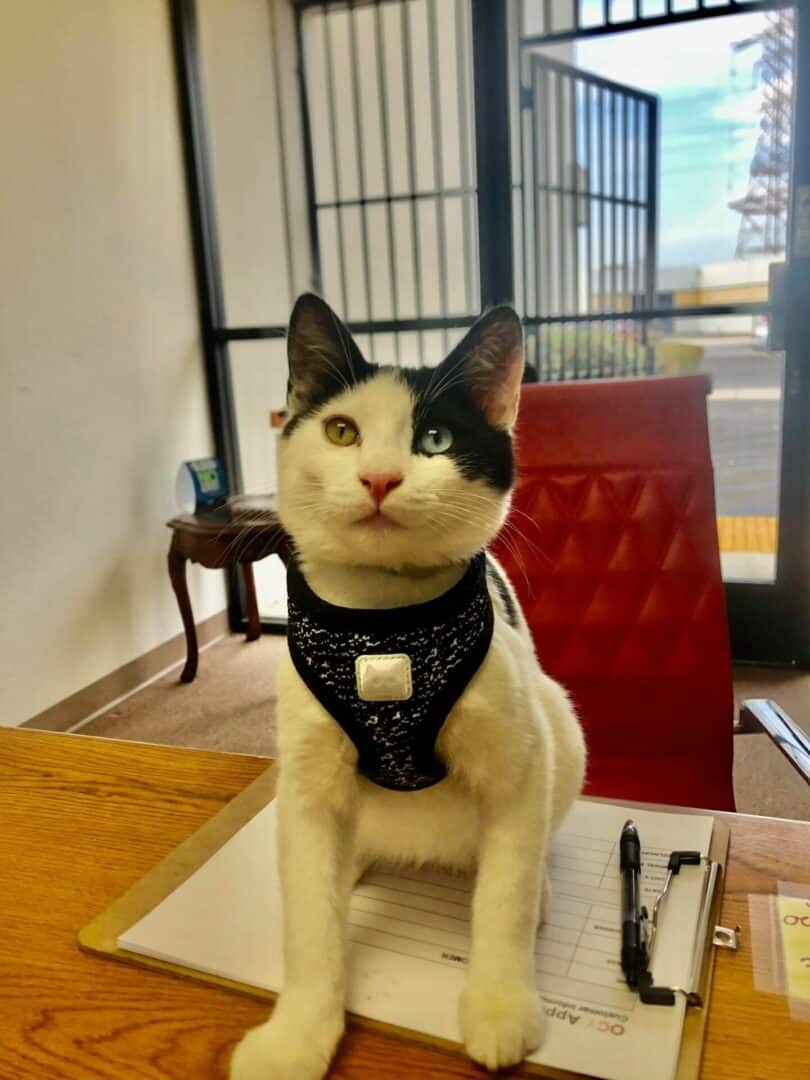 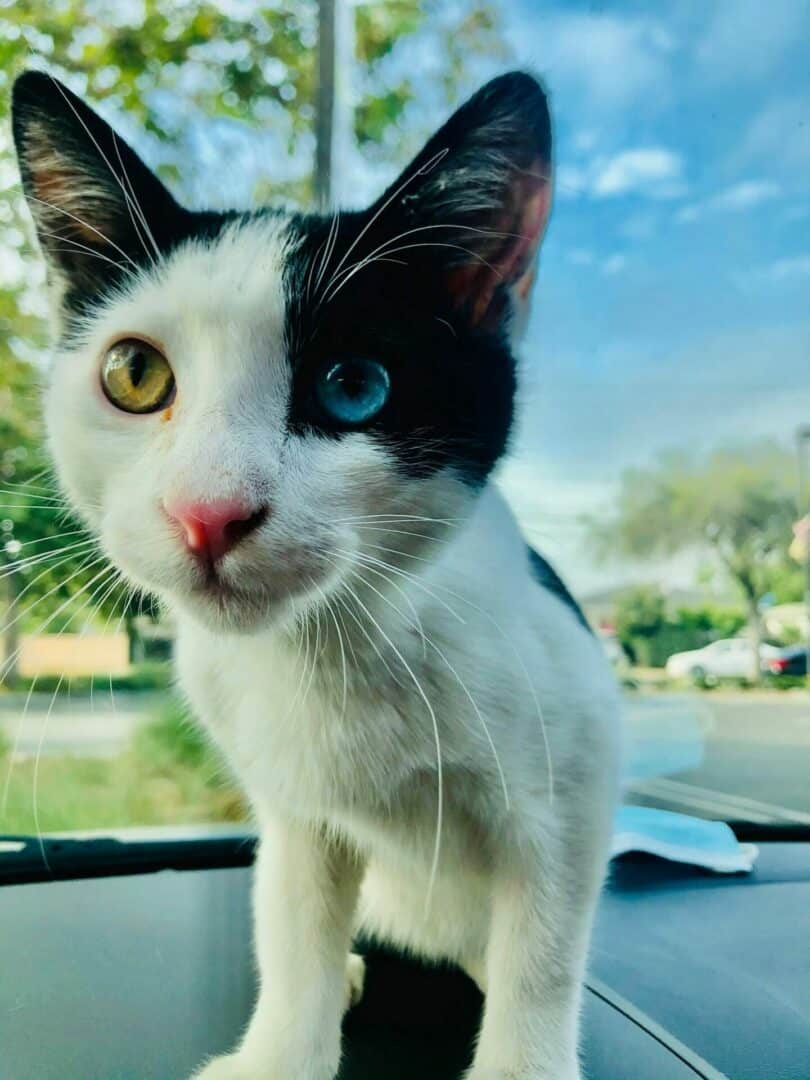 Extremely clingy!!! Immediately took to having a leash on him and wanting to travel everywhere. Car, Bus, Cat backpack. He has become an office cat at my workplace. Hanging out with customers and sleeping on furniture.

He lives with a 2 year old black pitbull/labrador named Moose! And they get along just fine!

Outdoor walks, he loves rolling around on warm concrete after a long hot day. 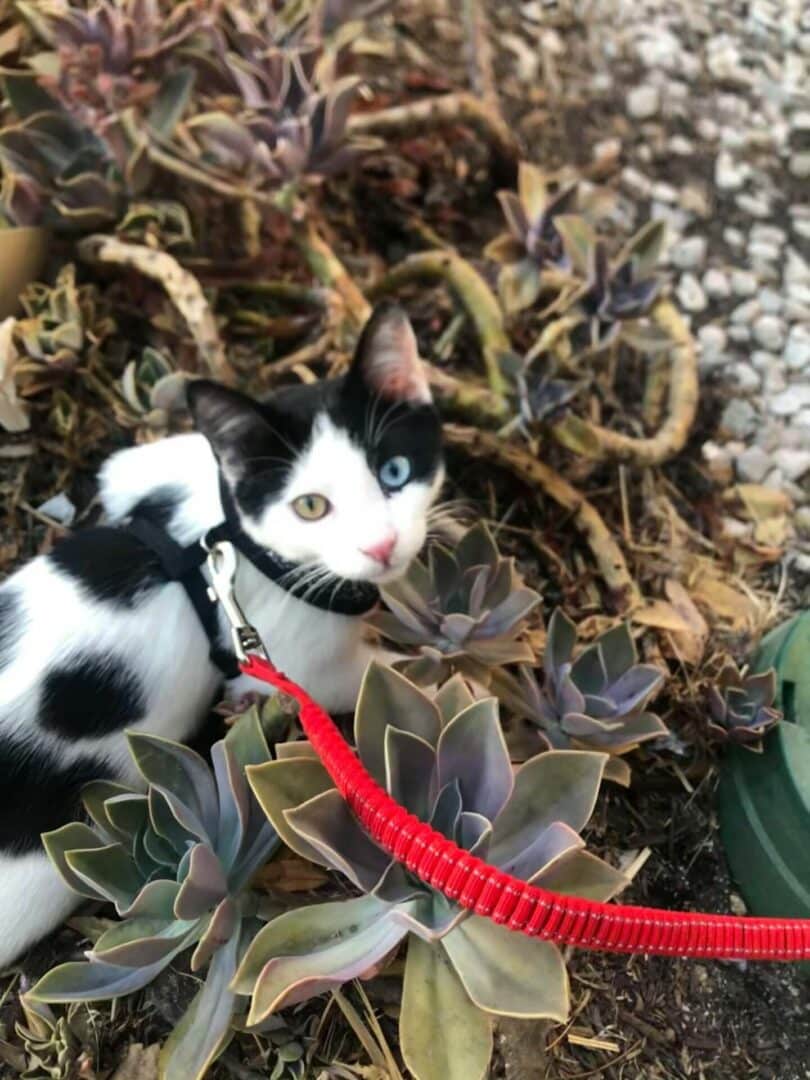 What’s something special you’d like people to know about him?

Street cats have beautiful and untamed souls. Raymond went from never knowing a warm home to now traveling and sleeping like a king! His eyes are special just like he is.

I’d like to give a special “thank you” to Giselle for allowing me to share Raymond’s story and precious pics with all of the Cattitude Daily readers—and also for all the hard work she does for cats in need. The feline world is a better place with her in it!

Crazy about odd-eyed felines? Check out this gallery here on CattitudeDaily.com featuring a purrfect collection of felines with heterochromia!

Do I Need To Brush My Cat’s Teeth?