Artist Photoshops Her Cat Into Famous Works Of Art

Russian artist Svetlana Petrova loves her cat Zarathustra. And what’s not to love? He’s a fluffy ginger tabby with a beautiful little face. After her mother’s passing, Svetlana took in the well-fed kitty and gave him a loving home where he could spend the rest of his days.

“I lost my mother in 2008 and she left me Zarathustra. I got horrible depression after her death and for two years I was unable to do something creative. By chance a friend asked me ‘why don’t you make an art project with your cat because he’s so funny.” 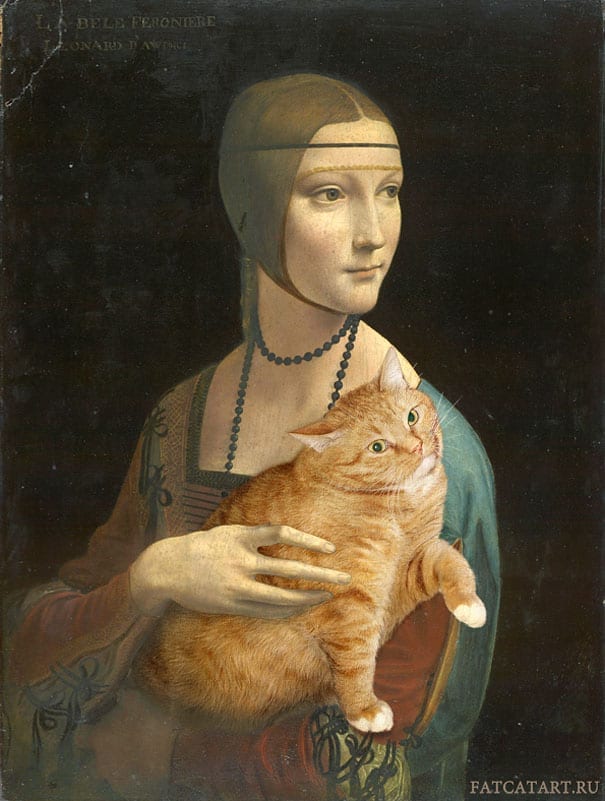 “I’ve had cats before and included them in my work, like playing in theatre shows and I’ve made costumes for them. But I thought, ‘What can I do with Zarathustra, because my mother spoilt him and he’s so fat.'”

Vincent Van Gogh’s The Starry Night is transformed into The Furry Night! 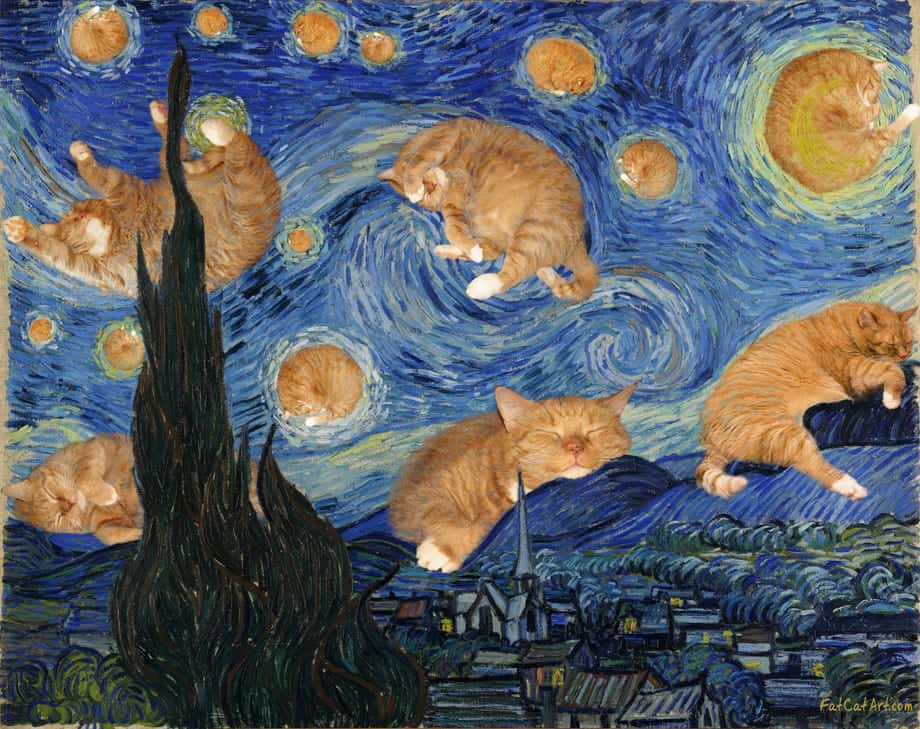 “Zarathustra likes posing and is a really intelligent cat. He likes to lie on his back and make strange faces like he’s speaking with somebody, so I began to take photos of him and inserted them into paintings.” 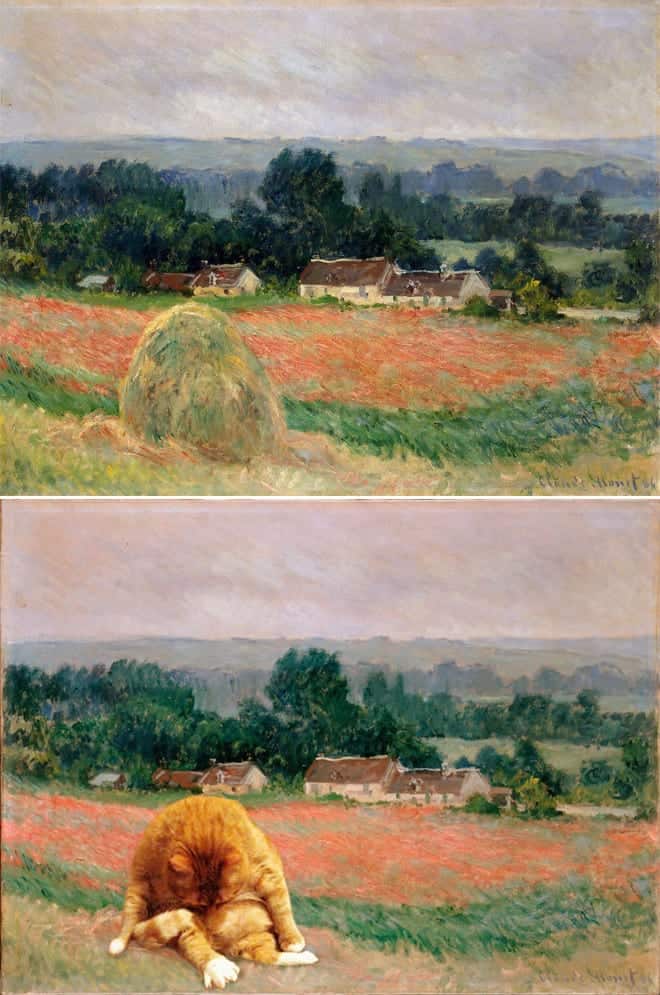 “I liked the result so I sent it to some friends, other artists and galleries. Everyone laughed so much, so I made a website, but then forgot about it because I had another project.

After a few months, another friend saw my cat work in my albums and asked why I had it. I told him it was my cat and he said: ‘Your cat is all over the internet!'” 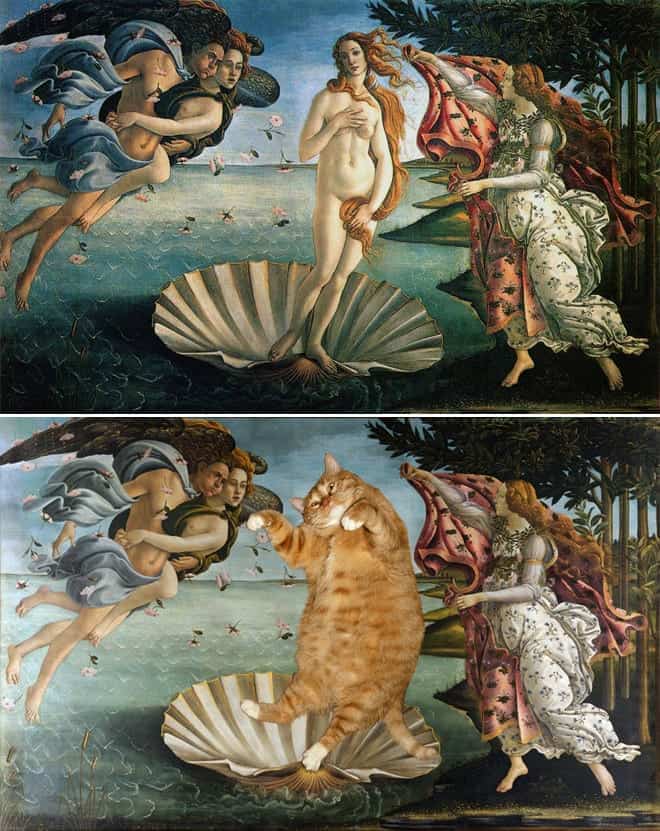 The Birth of Venus by Sandro Botticelli (1486)

How does her ginger kitty cat inspire her with the perfect masterpiece to put him into?

“I see his pose and imagine what painting he can enter, or I find a painting and try to make him play that role of the character I see in the painting.” 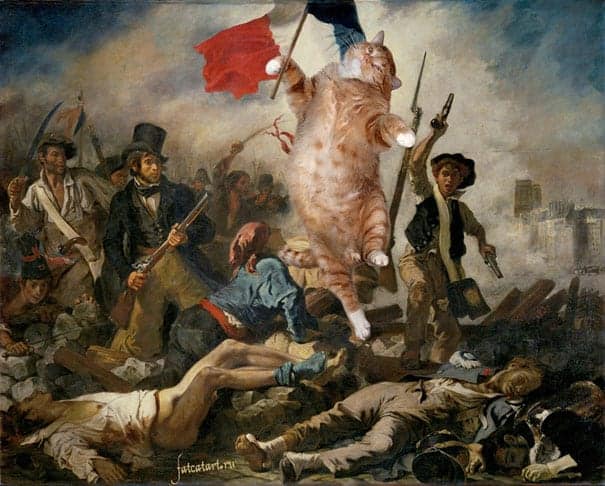 “Like with the Mona Lisa – in the original photo, Zarathustra was really sinking in my hands on my lap and sliding because he’s too big – it makes Mona Lisa look like a modern girl who’s taking a selfie with her cat.” 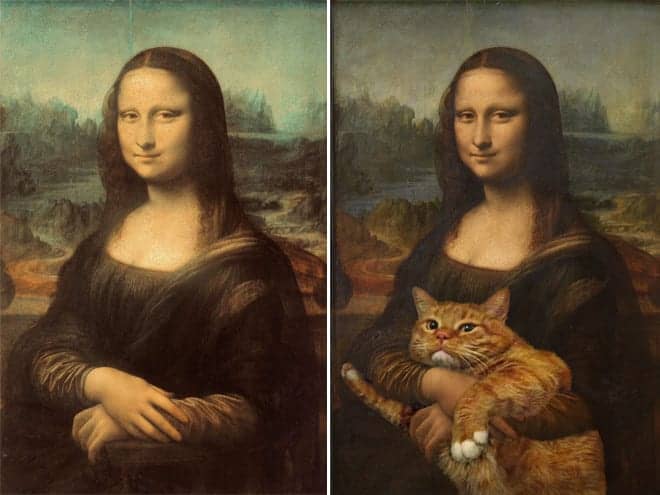 But just as cats do, these photo sessions are always on his terms…

“Now we have special photo sessions with a professional photographer and a team who entertain Zarathustra. But sometimes he’s not in the mood and I have to wait months until he agrees to make the right face.”

That’s a cat after my own heart right there!

Nailed the expression on this one…. 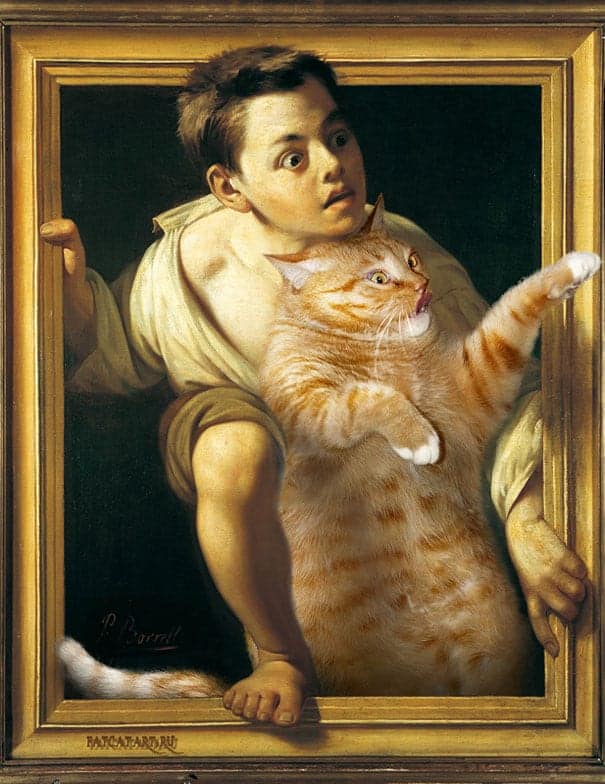 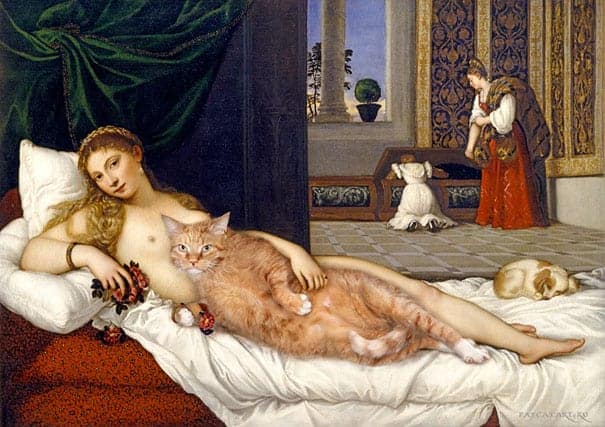 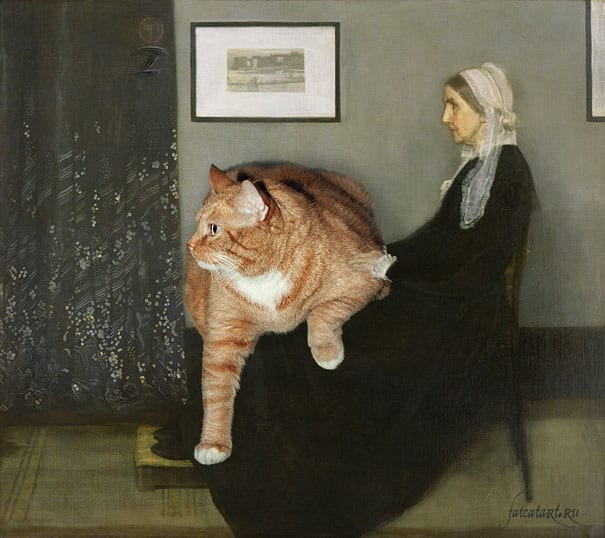 Looks like someone wants some milk in this one! 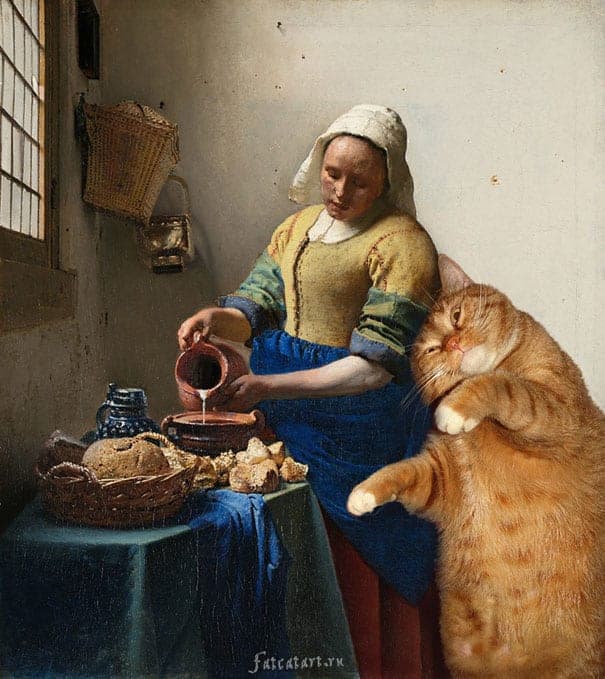 Now for some fun additions to famous works of art from the last century! Svetlana has added Zarathustra into many of the most popular works we know well…

That’s a whole lot of kitties! 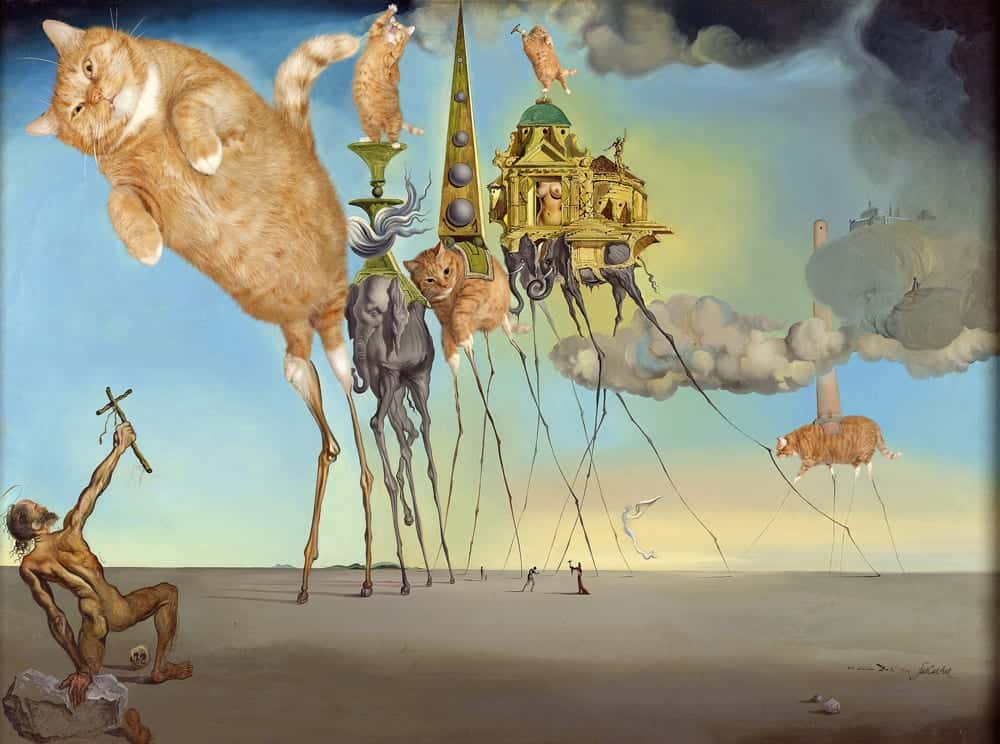 Move over Marilyn, this kitty is purrfection. 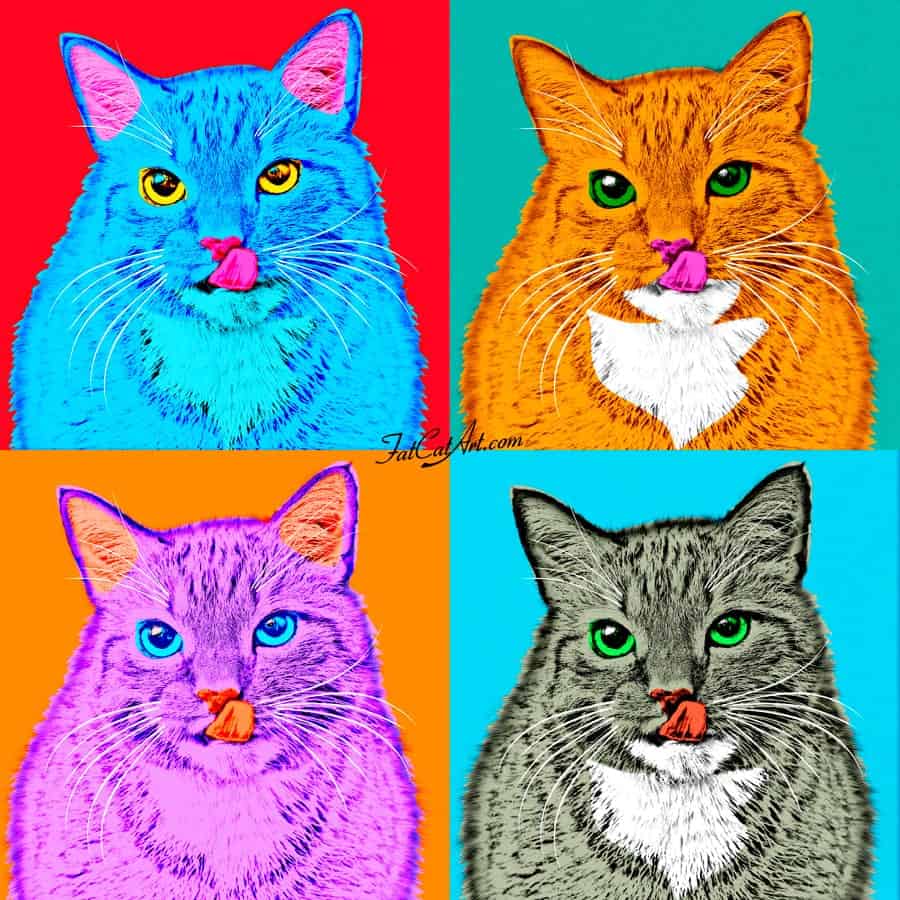 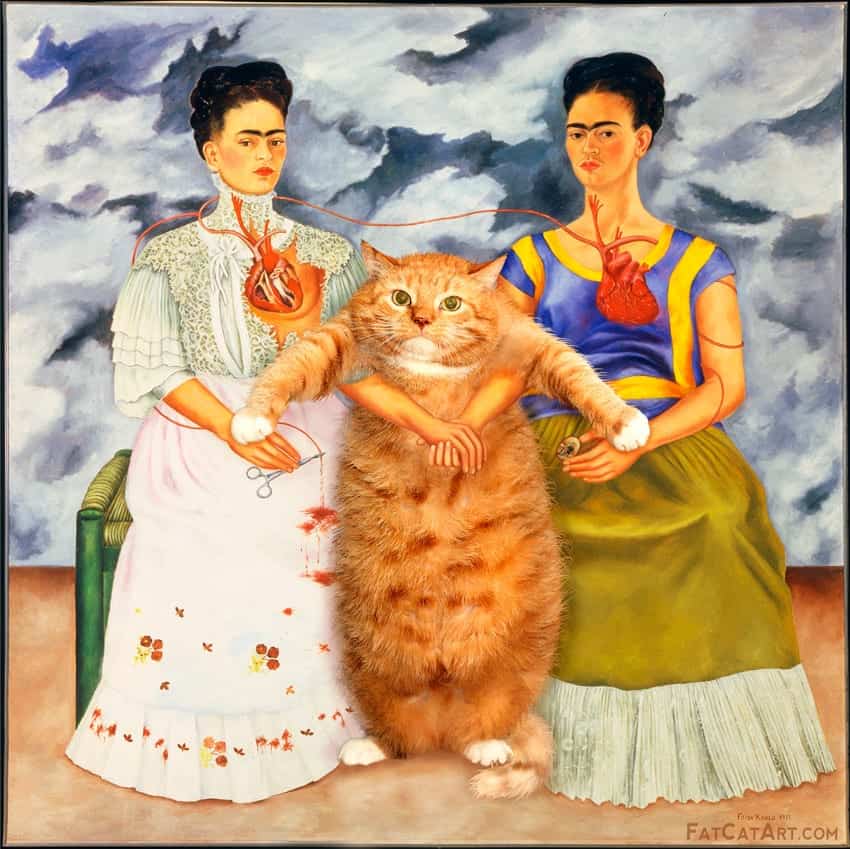 Aside from her lovely kitty, Svetlana says there is also an additional inspiration behind her work:

Love the title on this one: Norman Rockwell, Freedom from Want: Give you Turkey to the Cat 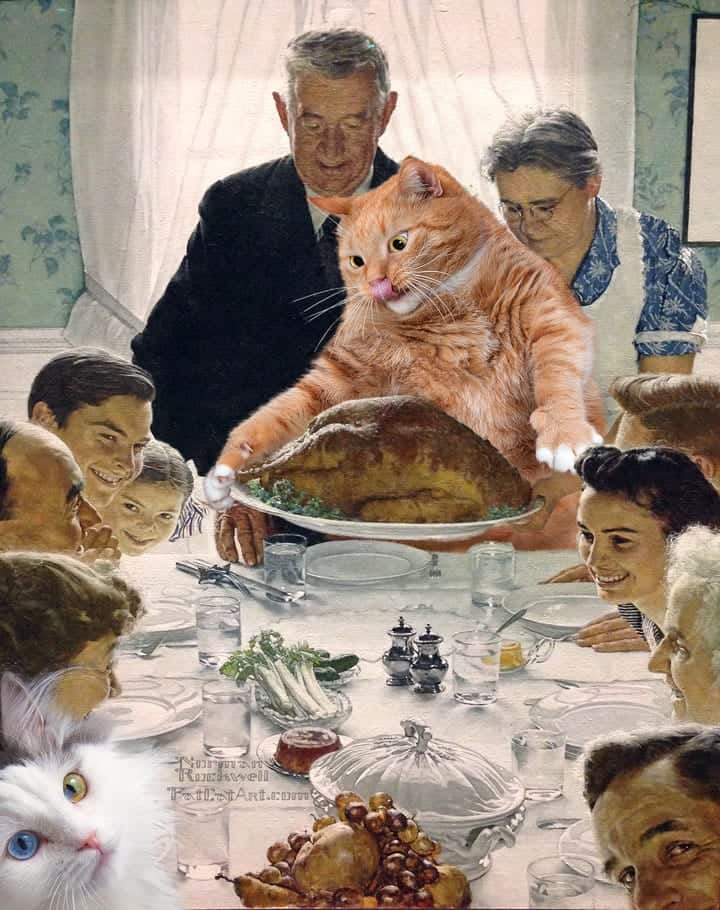 Want to find a purrfect coffee book for yourself or someone else who loves cats and art? Svetlana has a five-star Fat Cat Art book for sale on Amazon.

Can’t get enough of these purrfect works of art? Check out Svetlana’s website, FatCatArt.com for loads more, we promise, you won’t be disappointed! 😻

All Images Courtesy of Svetlana Petrova

Why Do Cats Like To Put Their Butts In Your Face?