Feline 411: All About The Somali Cat

All cats are beautiful in my opinion, but there are some breeds that catch our eye and hold our attention instantly. And when it comes to the Somali cat, this is exactly what I’m talking about. You may have seen a Somali cat before, but if you haven’t, well, you’re in for a treat. There’s a lot to learn about these naturally foxy felines. So, keep reading to learn some fun and interesting facts about the Somali cat breed. These marvelously floofy felines are often described as fox cats, and it’s easy to see why. Errol the “fox” cat, featured above, is quite popular on social media. (Check him out here!) And chances are, you’ve seen his cool Russian Blue cat housemates, Xafi and Auri, too. With their fox-like coat and beautiful plumed tail, these cats are admired by many for their unique beauty that’s impossible not to admire.

VCA Hospitals notes that many Somali cats have a fondness with playing with their human’s hair—whether it’s the hair on their head or even a beard or moustache! Because of their fascination with human hair, Somali cat lovers joke that these cats possess what is known as the “hairdresser gene.”

If you’ve ever wondered why your cat will lick or chew your hair, find out the answer here on cattitudedaily.com. Cat got your tongue?

All cats are truly individuals, but there are breeds of cats which are known for their soft spoken nature—and the Somali is one of them. These intelligent felines are grabby the way that Abyssinians are, so if they want something, they’ll go for it.

And they won’t meow to get your attention the way a Siamese or Bengal will, they’ll pop right into your lap and let you know when they want your undivided attention. The Somali cat loves to put those paws to work with a knack for kneading their humans, too. So, you’ll always know when your Somali cat is ready to share the love! 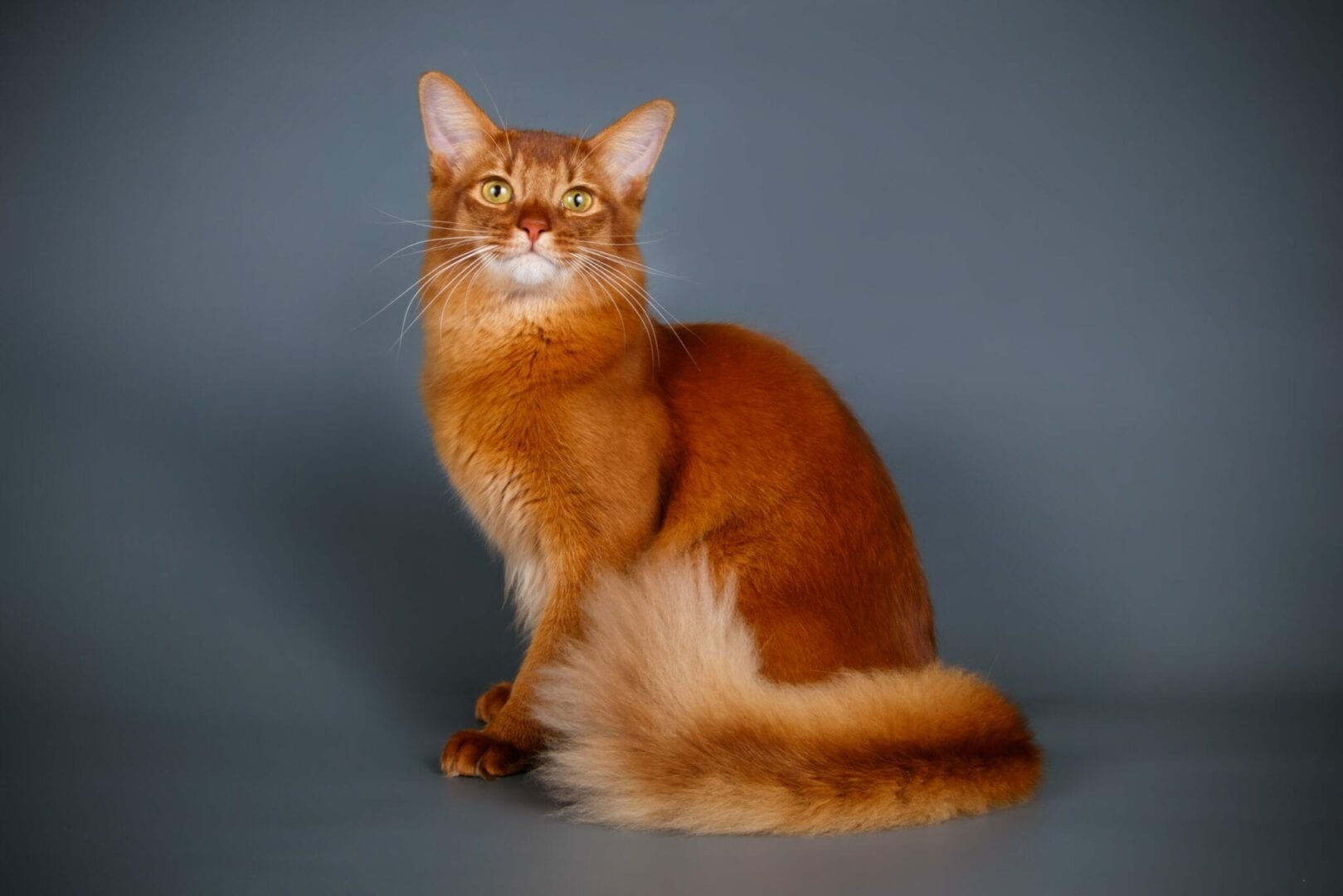 A Somali cat is technically a long-haired Abyssinian

In Australia in 1965, the first “long-haired Abyssinian”—AKA Somali—was officially recognized at a cat show. And in case you didn’t know, a Somali cat is a long-haired version of the Abyssinian cat breed. These cats come with their signature lovely long fur due to a recessive gene. The name of the breed, Somali, doesn’t require much decoding to figure out. These cats hail from Somali where it’s believed they were first discovered. However, their exact origins are somewhat mysterious.  And it seems that some viewed this longhaired trait as undesirable. But, if you ask me, there’s nothing undesirable about these fluffy kitty cats! 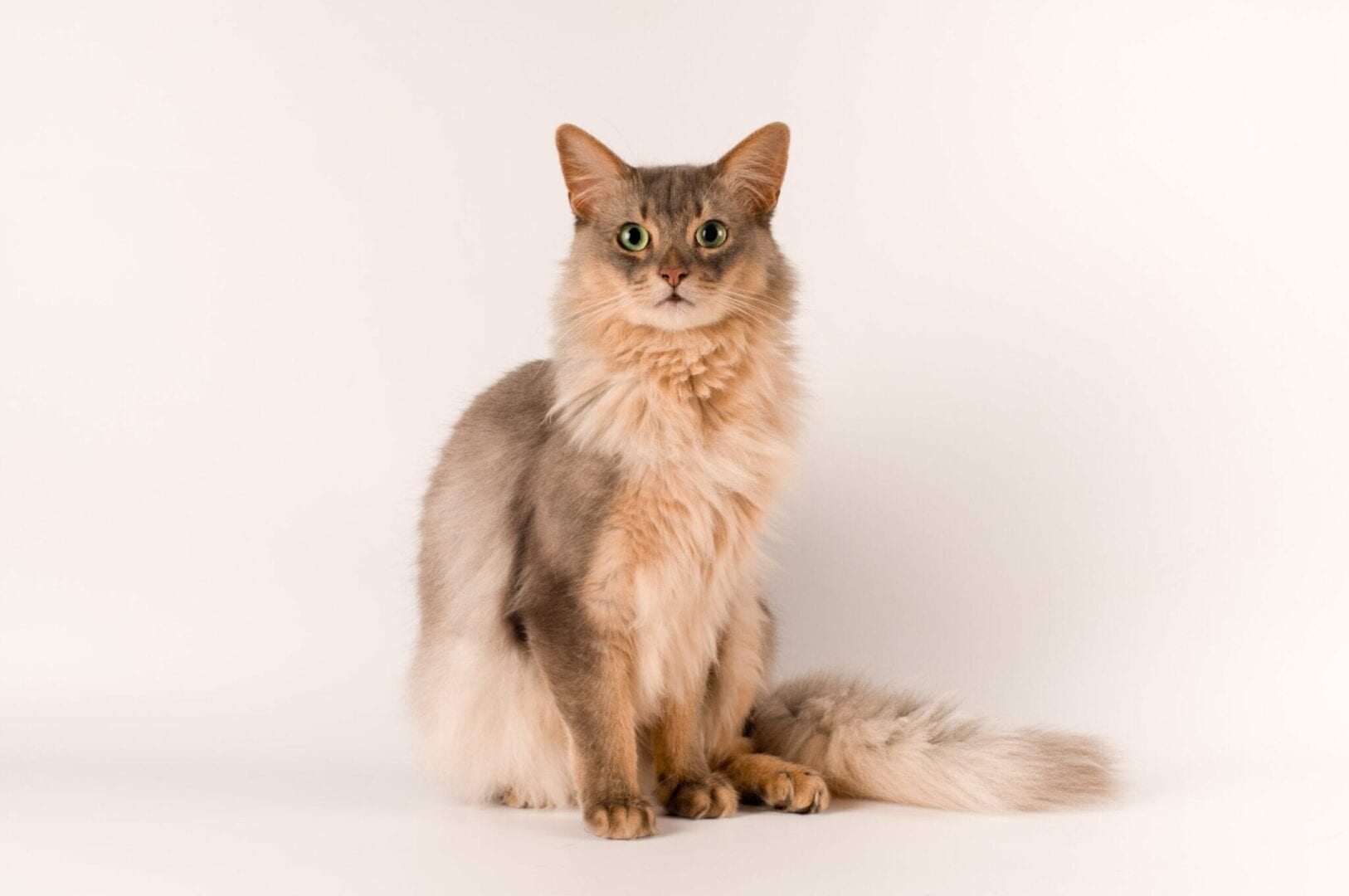 This pretty kitty is a blue Somali cat

They come in a few shades, actually

Similar to how the Abyssinian can come in a few dazzling shades, so does the Somali cat. The classic red cinnamon shade is what these lovely felines are most known for, but they also can come in blue, fawn, and ruddy according to the Cat Fanciers’ Association.

Regardless of a purebred Somali’s shade, they will all share similar physical attributes that cat lovers go catnip crazy for. From their perfectly plumed tails, wedged-shaped heads, large ears, and almond-shaped eyes, the Somali is a sight to behold. And, as kittens, they almost look as if they’re wild cats you’d see roaming the plains of Africa! Similar to how the Abyssinian cat breed is known for their smarts, the Somali is also known for their inquisitive and playful nature, too. These cats are better suited for homes where they won’t be left alone for long hours on end due to their strong desire to play. They can become clingy easily, and long hours spent alone can cause them to become very lonely. This is a breed of cat which thrives off of mental stimulation and interaction with their humans. And while some cats prefer to be aloof or are naturally timid, the Somali will thrive in homes with children and other pets.

Some people might view these overly curious cats as naughty cats, but the truth is that they’re simply misunderstood. At times, a Somali cat is just too smart for their own good. With that being said, this can get them into mischief should they not get the attention they crave and deserve. A four-legged friend at home can help to keep them company, hint, hint!

Now that you’ve learned all about these super smart felines, check out this next article on cattitudedaily.com where you can learn all about the smartest cat breeds out there.

Meet Dyson, Kirby, And Shark: A Trio Of Barn Cat Siblings With Cattitude