I sometimes wonder if the saying that cats have nine lives originated because oftentimes a cat’s first life is usually an unlucky one. Many of us have rescued our cats, myself included. Two of mine were abandoned, one of which from a moving vehicle.

But thankfully for cats, there are kind-hearted people all over the globe who have a soft spot in their hearts for our feline friends. And when we see one in danger and in need of rescuing, we swoop right in to bring those poor kitties to safety.

Pirate the cat is one of those felines who had a rough start at life. Mistaken for a styrofoam cup in the middle of an old country road, his chances of survival were slim. But—*spoiler alert*—he had fate on his side in the form of a sweet lady who knew exactly what to do when she spotted him!

I learned Pirate’s story and connected with his owner, so keep reading to learn about Pirate’s very happy ending…

1. How did Pirate come into your life?

On April 25, 2017, my mom and I were on our way home out in the country and taking back roads in a strong Midwest Spring storm with strong winds, heavy pouring rain, lightning, and thunder. It was close to getting dark, and we were just trying to get home safely through the wicked storm. We were going quite slow because of the wind and downpour on an old country road. Then, I looked down and saw this little white blob out in the storm.

As we were passing this little white blob, the tire splashed it with rainwater and just slightly missed hitting it. I quickly said, “Pull over, that is a tiny kitten!”

My mom replied, “That isn’t a kitten, it’s a styrofoam cup.”

To which I replied, “No, it isn’t, that is a little kitten!” I jumped out in the pouring rain and could barely see, and I ran up to him and here was this little white blob just scrunched up, and his head down fighting the wind and rain trying to crawl to the side of the road. I burst into tears and said, “ohhhhhh, kitty!”

He looked up at me and with ALL his little might with his eyes squinted, he let out the biggest “Meeeeooooowwwww!” he could! I picked him up and cradled him in my shirt inside the warm truck. But before bringing him home, I ran out in the storm again to look around the area to see if there were other kittens and/or if maybe a mama kitty that was moving him to safety.

With no sign of any others, we brought him home in the warm house, and we realized quickly that he was too young to eat hard food . We made up some soft food—and he was really hungry! We’ve never seen a cat eat so fast before. The poor baby was just starving! He was so dirty and had grease all over him, so had to give him a bath. His ears were black with ear mites. I must’ve used 25 Q-tips trying to get them somewhat clean until we could get medicine from the vet.

Now about an hour later around 9pm, clean, dried off, and with his belly full and warm and completely content, he was ready for a good rest. He curled up next to our dog Buckwheat the very first night bringing him home. They were friends from Day 1! The only thing we came up with on how Pirate got out on this deserted farm land back road is that it is not uncommon for kittens to climb in farmland machinery to keep warm. We think a farmer was moving his machinery (tractor) and Pirate must’ve been up in the machinery. He was likely frightened to death, so he just stayed put and went along for the ride before falling out (which would explain the grease and how dirty he was).

2. How did you come up with his name?

After a few days now, still no name but, his personality started to shine and although he was getting stronger so was his personality. We don’t allow animals on our kitchen counters or bathroom sinks but, he didn’t care because he was a Pirate! Argggghhh! Thus his name Pirate came to us as it fits him perfectly. To this day, Pirate does whatever he wants. Oh, how we love him!

3. What are Pirate’s favorite hobbies?

Getting in boxes, bags, and/or anything such as sinks where he thinking he’s hiding. He is a very friendly kitty, but he loves the game of when we walk by to duck in things and crouch down to hide. Like it’s a game. He’s so cute! 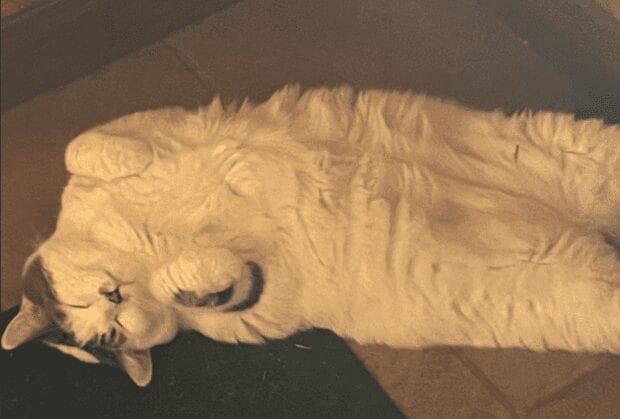 What’s something special you’d like people to know about Pirate?

Pirate actually went “missing” last winter. He is strictly an indoor cat but. But, even though we have a 3-story house and we looked and looked for him, he was certainly gone. We searched every room and closet only to find nothing. It was sooo sad. We were very concerned that he had slipped outside and living in Wisconsin with winter storms it can be brutal, and go figure it was one of those storms that he went missing. With snow and below 0 weather in the forecast. We called and called for him and nothing. We ended up taking his cat tree outside on the front porch, so if he came back he would have some place to go somewhat warm out of the wind and snow, with blankets, his cat box, etc. I got up several times in the middle of the night to see if he had shown up and nothing. Pirate was gone. We were all so sad!

The following day, my mom was putting laundry away on the 2nd floor in the bedrooms. There was a dresser drawer that was slightly open on the lower drawer. She went to go push it in and it wouldn’t push in, so she pulled it out thinking it was off track. She pulled out the drawer to put it back on the track and there went a flash of Pirate flying by! Here he had gotten in the dresser drawer, crawled behind the drawer against the wall and once he was was behind the drawer, he wasn’t able to come back through. We still to this day can’t figure out why he didn’t make noise, yell, howl or anything for 1.5 days. He didn’t make a peep as we would’ve easily been able to hear him. We were just soooo happy that Pirate was found! Pirate has turned out to be our amazing rescue cat and loves his barncat friends Dyson, Kirby and Shark as his playmates. He eats with them, plays with them, and has our four dogs that he’s great friends with, too. 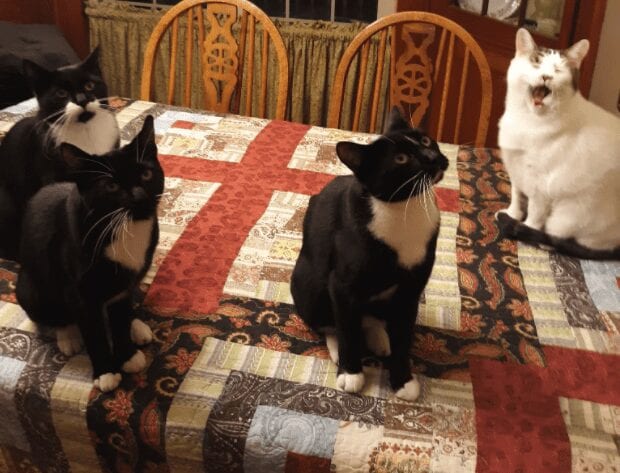 Pirate with his cat housemates, Dyson, Kirby, and Shark

I’d like to give a special “thank you” to Pirate’s owner for allowing me to share his photos and heartwarming story with all of the Cattitude Daily readers. If you’d like to learn about his cat housemates, Dyson, Kirby, and Shark, you can read all about them here.

7 Kitten Safety Tips For Your Home

How Do I Train My Cat To Use A Scratching Post?