Himalayans are super unique cats. These cats have their very own look. Their thick silky fur and striking blue eyes make the Himalayan cat breed hard to go unnoticed. Maybe you already know that and are already a Himmie owner yourself. We don’t blame you – the Himalayans are a beautiful cat breed.

So, what makes the Himalayan cat breed different from its Persian and Siamese parents? Lots of things! 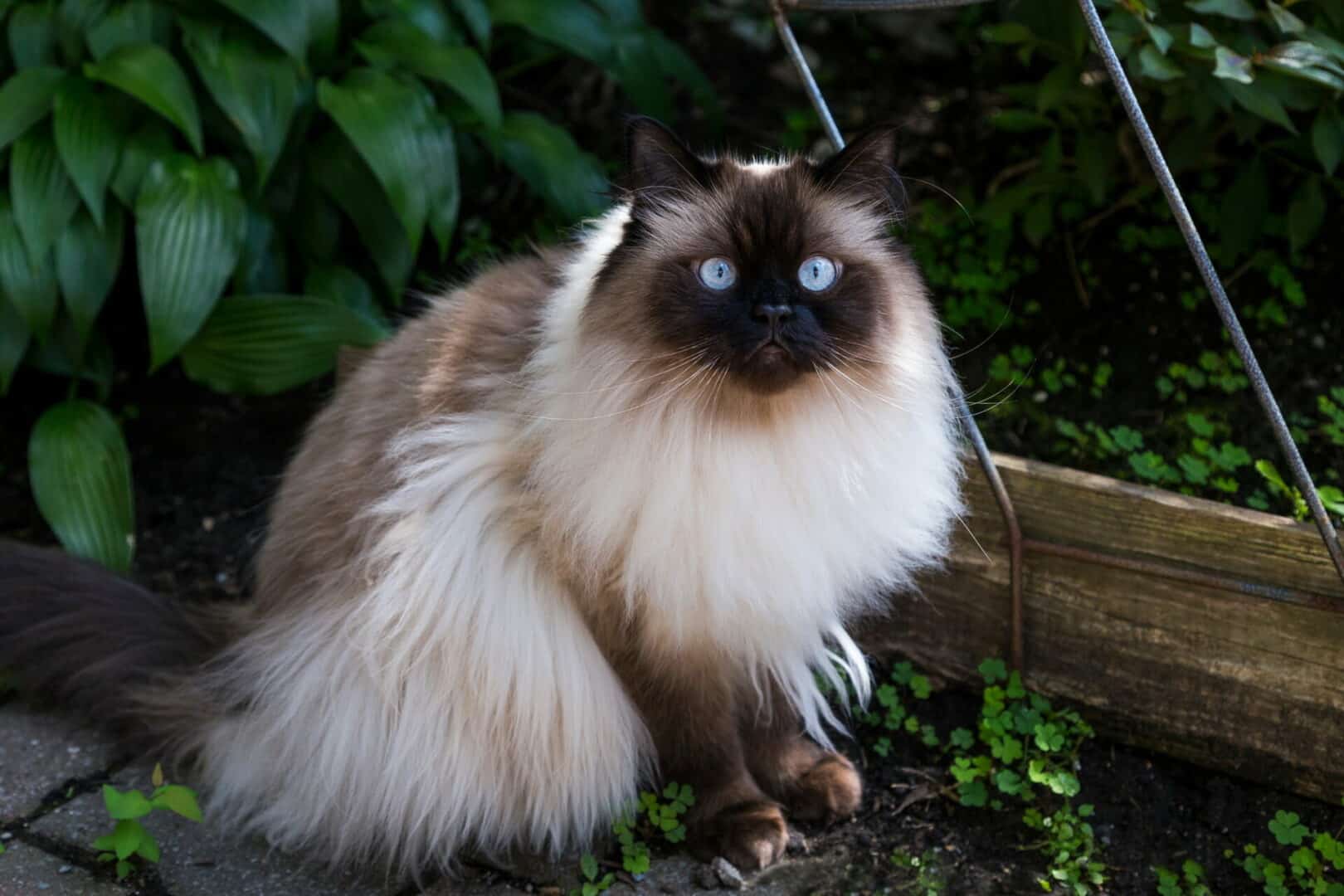 Let’s Discover All About the Himalayan Cat Breed

The Himalayan Cat is a Hybrid

The Himalayan cat breed doesn’t have an ancient history. Rather, the Himalayans were a result of crossbreeding two other cat breeds: the Persian and Siamese cat.

This all happened in the 1930s when two Harvard researchers Clyde Keeler and Virginia Cobb aspired to combine the traits of the Siamese and Persian cat. Their research and breeding didn’t stop there – for decades after their experiment, many breeders continued to crossbreed the two cats, creating the gorgeous Himalayan cat breed we know today.

There’s a lot of discussion around whether the Himalayan should be considered its own breed. Some classify the Himalayan as part of the Persian group while others consider these cats their own individual breed. 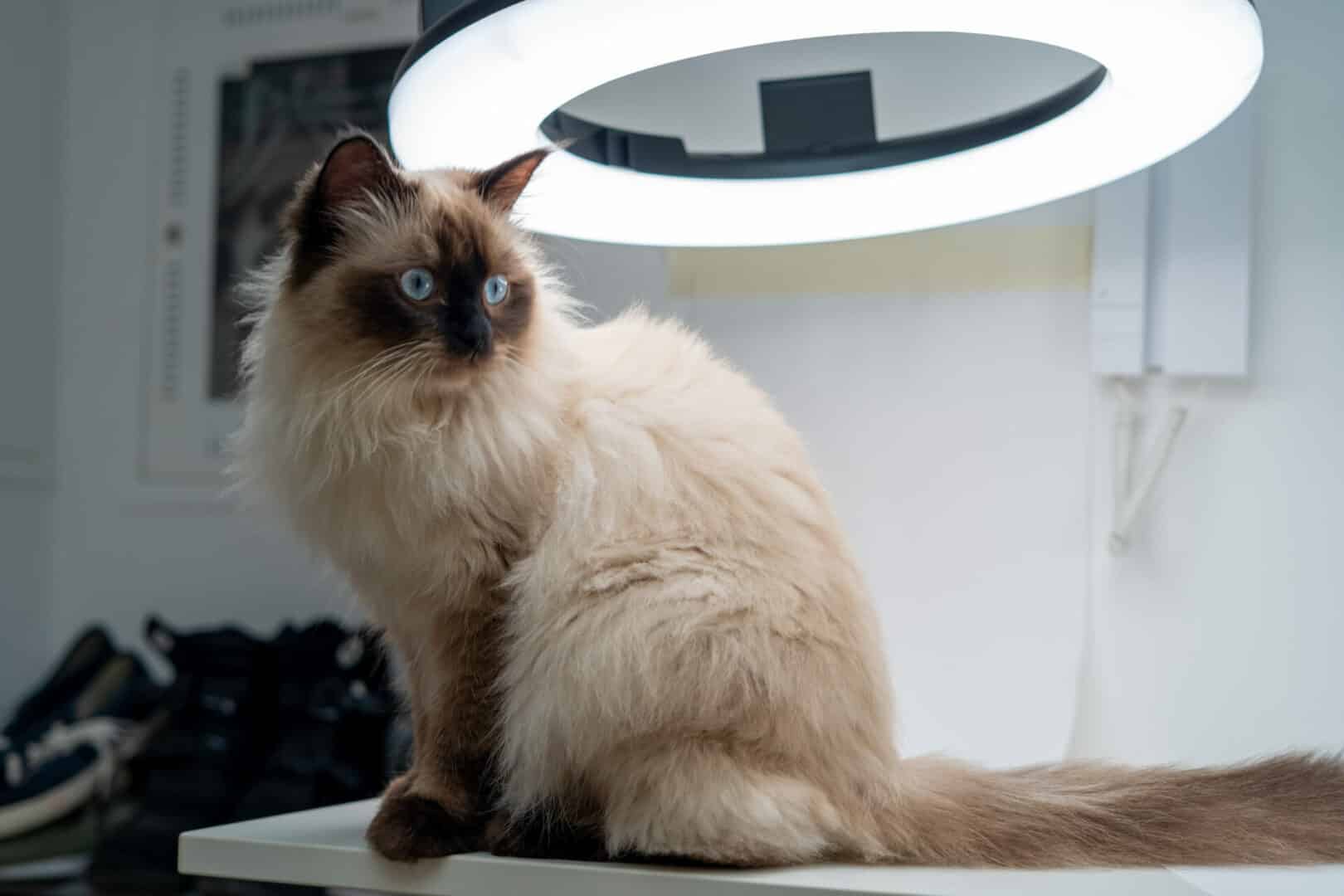 Himalayans don’t all look the same. You’d be surprised to learn that the Himalayan cat breed has 20 different color points! This is something that influenced their breeding. Himalayans have various point colorations that make each Himmie unique in its own way.

Check out this fun graphic which features the many fun color points of the Himalayan! 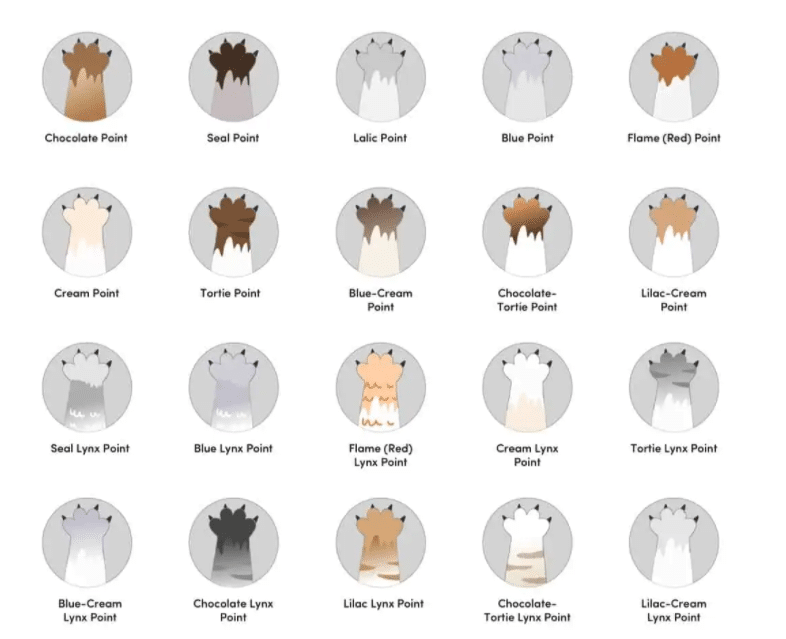 So, what are the color points of Himmies? The most common ones are lilac point and lynx point Himalayans, which have even more coloration variations among them! These are the reason why you may see Himalayans with creamy white hair, dark brown hair, or even blue-ish hair. They make look different, but they are all equally Himalayan. 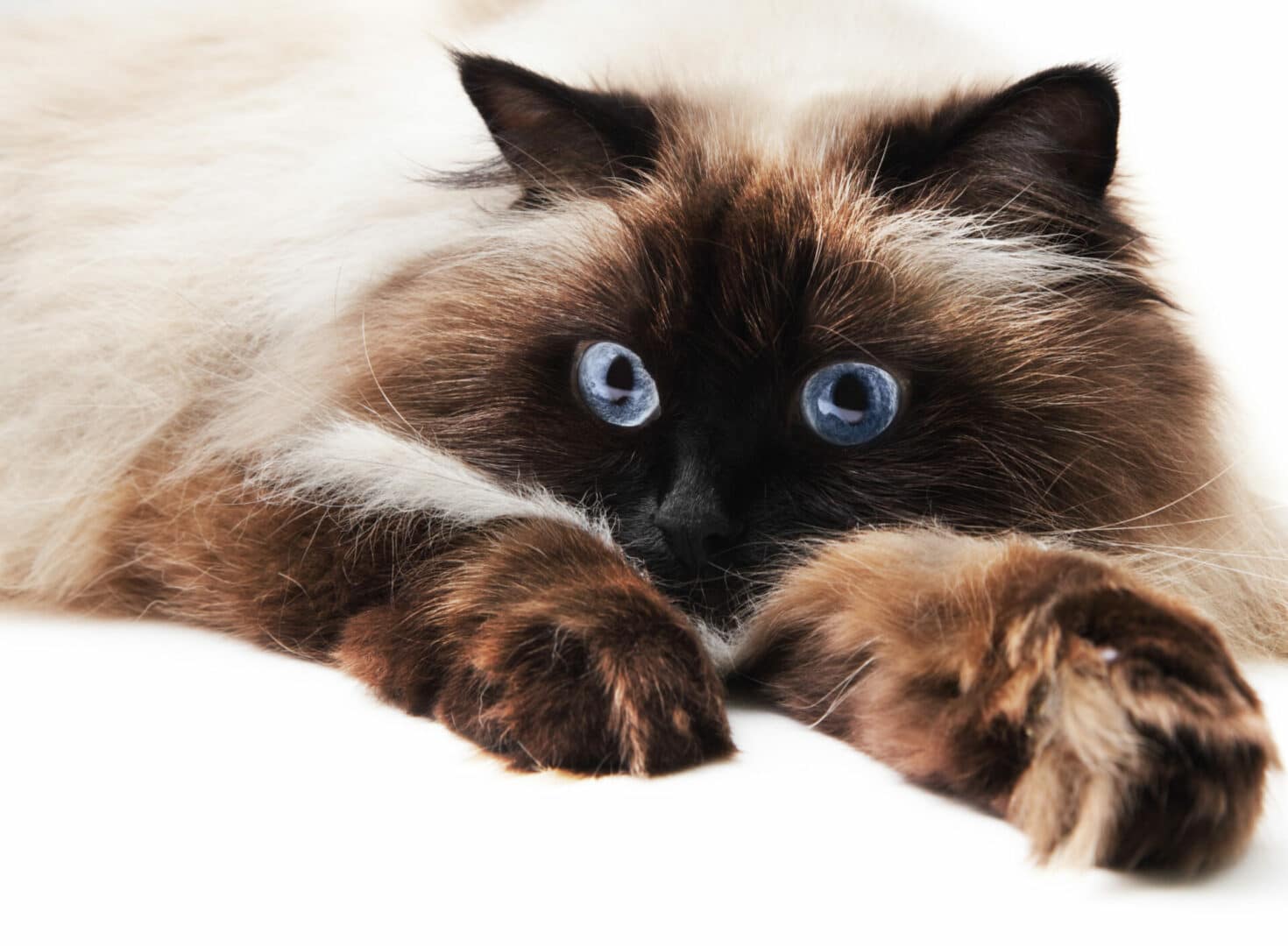 These Cats have Stunning and Sensitive Eyes

No one can deny that the Himalayans have some beautiful eyes, thanks to their Siamese parent. These eyes aren’t just blue, they’re a bold and striking blue that no one can miss. It comes as no surprise that Himmies are known for expressing everything with their eyes.

As we know, beautiful things must be taken care of Himalayans often struggle with eye issues. This isn’t a result of their gorgeous eyes – it is because Himalayans are brachycephalic, like pugs. This means that they have flat faces, making them prone to certain respiratory and eye issues. 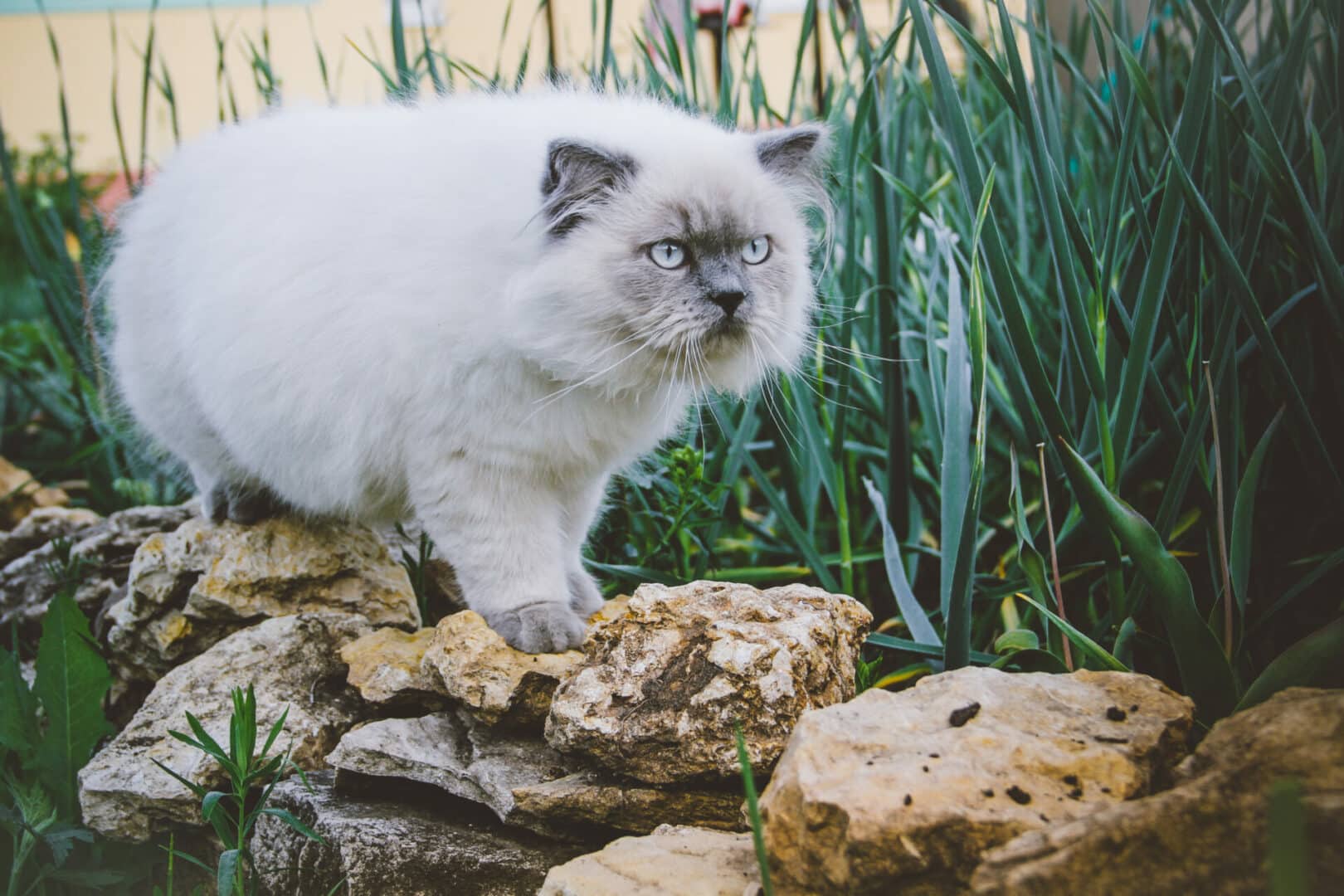 Don’t Be Fooled by Their Fluffiness

Himalayans fool us with their hair. While they do have a relatively larger body than other breeds, Himmies are not as big of cats as they appear. Their thick long hair makes their bodies look a lot larger than they actually are.

If you pick up a Himalayan, you’ll realize that they really aren’t massive cats. They are relatively medium-bodied. This, along with their silky soft fur, makes Himmies excellent lap cats. 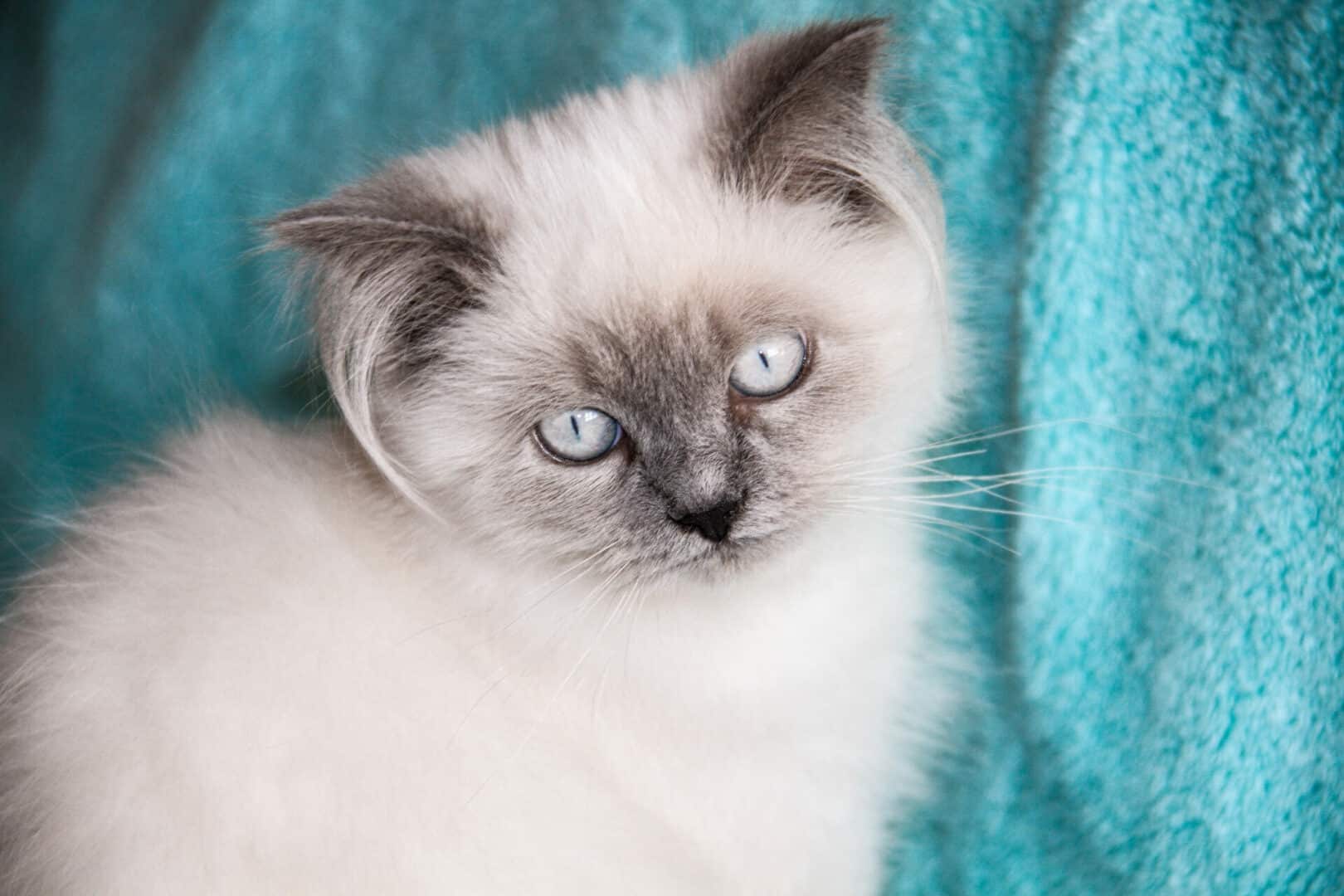 These Cats were Named After Rabbits

You’d think the beauty of the Himalayan cat breed would be enough to explain why this cat shares its name with a stunning mountain range. It’s a little different than that…

These cats got their name from one of their earliest breeders in Britain. They thought that a Himalayan’s hair reminded them a lot From then on, these cats were known as Himalayans.

Himalayans Have a Few Names…

Due to their breeding history, the Himalayans have received quite a few names. For a while, they were just called Persian-Siamese cats. Today, these cats are known as Himalayan Persians in America. But, in Europe, Himmies are actually called the Colorpoint Persian. 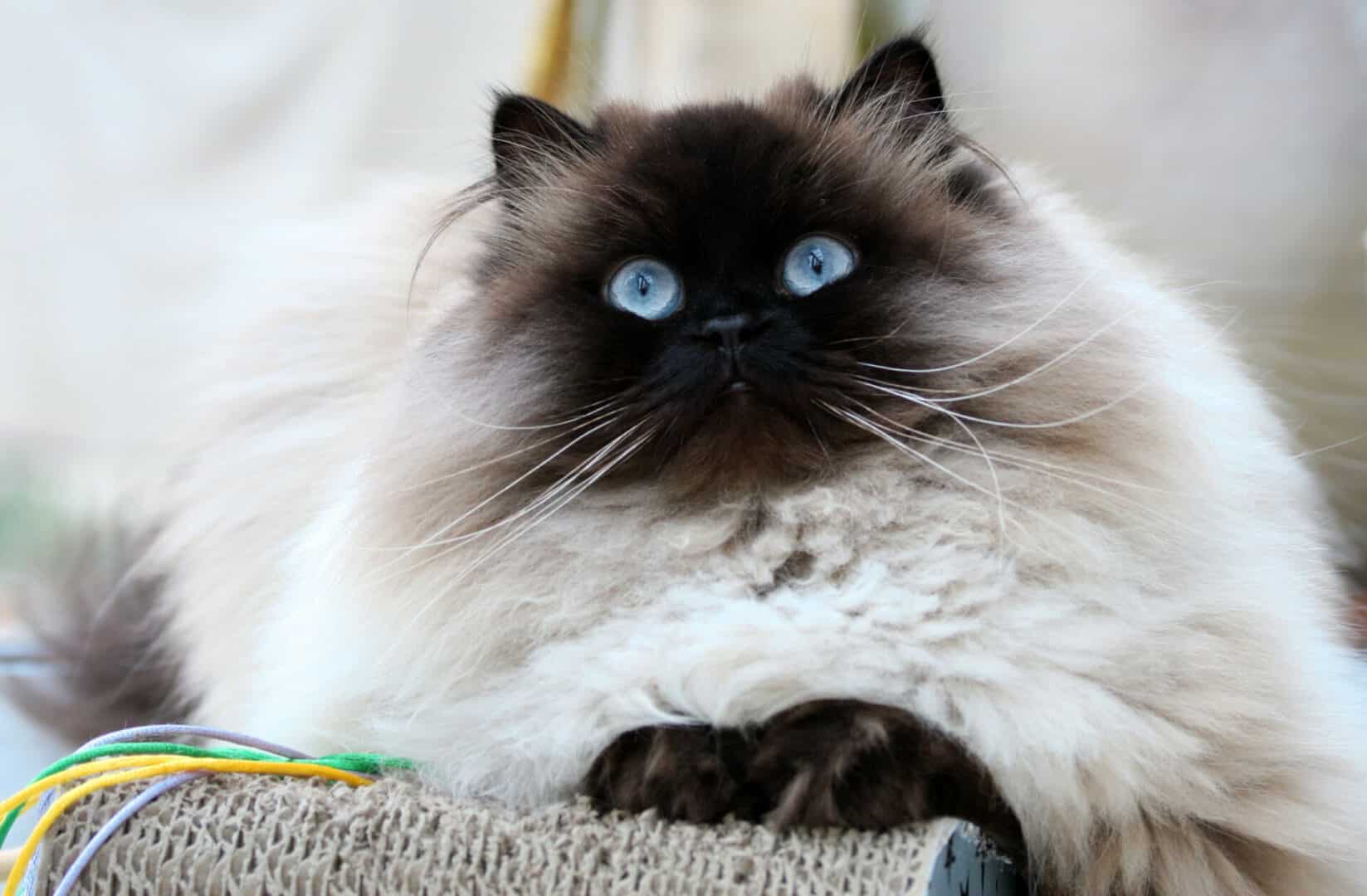 One of the reasons many love the Himalayans is their awesome attitude. They aren’t the kind of kitty that’s going to scale your walls, cling to your curtains, or jump off your fridge. Himmies are known for their chill attitude. They are a little shy and prefer calm environments.

This also makes the Himalayan a very family-friendly cat. Most Himmies adore being pet and pampered. They give a ton of love in return too! But, these cats are not a fan of rough games. They run away from any abrupt behavior, like aggressive touching or loud noises.

Whether you have a Himmie at home or not, we hope you enjoyed all the fascinating facts about the Himalayan cat breed.  Himalayans are truly one of a kind. If you know anyone who has a pretty Himmie at home, don’t forget to share this article with them. They might just discover something they didn’t know about their lovable hybrid kitty!