Feline 411: All About The Ragamuffin Cat Breed

There are lots of cat breeds out there, and some of them have some rather interesting names. The Ragamuffin—not to be confused with the Ragdoll—is one of this interestingly named felines. These large and fluffy cats are praised for being low maintenance and friendly to all those that they meet. Keep reading to learn some fun and interesting facts about the Ragamuffin cat breed… The Ragamuffin is related to the Ragdoll

Given the name of the breed, this fact should come as no surprise. The Ragamuffin was first developed in 1994, but the exact development of the breed remains shrouded in mystery. Ann Baker, the creator of the Ragdoll cat breed, closely guarded her cat’s offspring for generations, in order to retain markings, temperament, the classic “go limp” flop, etc.

The Ragamuffin was created because some breeders wanted to introduce additional coat patterns which were not officially recognized under the Ragdoll’s breed standard. There are some Ragamuffin cats that can look almost identical to a Ragdoll, and others that look much different. Variety is the spice of life, and it’s why many simply adore these colorful cats that retain the signature chill personality of the Ragdoll cat breed.

Like the Ragdoll, these are medium to larger sized cats, which males being considered perfectly healthy at even 20 lbs. For females, the average weight ranges from 10-15 lbs. According to PrettyLitter, the original name of the Ragamuffin cat breed was supposed to be “Liebling”—which is German for “darling” and makes perfect sense given the breed’s precious temperament. But, it was decided best to settle on a name which paid homage to the breed’s originator. Ragamuffins are large and lovely cats with stunning coats

The Ragamuffin—also sometimes spelled RagaMuffin—is a breed of cat which can come in a wide variety of shades, with or without white markings. These Ragdoll type white markings often make them closely resemble a Ragdoll cat, but these cats aren’t going to go limp in your arms like a Ragdoll might.

The unique patterns and markings these cats can come in make them head-turners for cat lovers everywhere. From mink to tortoiseshell, solid, and tabby, Ragamuffins are truly a sight to behold. Despite the fact that their coats are full and fluffy, the care required to keep them looking nice is surprisingly low maintenance. And because they’re coats are so soft and silky to the touch, you wouldn’t be able to resist petting them upon encountering one. But don’t worry, they’ll love it as these cats aren’t shy and thrive on affection and attention. 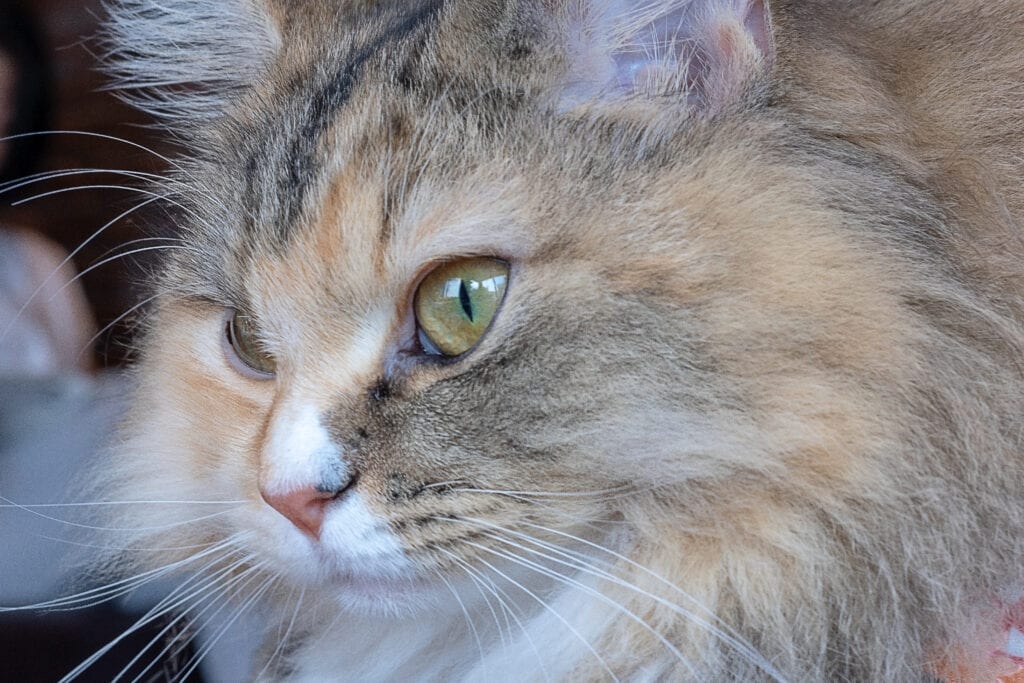 While some cats can be aloof and standoffish, the Ragamuffin is not one of them. These cats are known for their clingy nature, and wherever you go in your home they’ll be sure to follow. Ragamuffins are praised for their sweetness, so this is a perfect cat breed for you if you want a cat that’s all about spending their time with you.

This cat breed does best in a home where they’ll receive lots of love and attention, as long hours spent apart don’t bode well for their clingy nature. These cats are vocal as well, so they’ll be sure to hit you with meows of disapproval should you be gone from the house for too long. A cat that’s as friendly as can be

While cats are truly individuals by nature, the average Ragamuffin thrives off interacting with others. Once you have a Ragamuffin cat in your life, you will quickly realize that these cats own you, and not the other way around. They might be friendly and docile, but they are demanding of your time, attention, and affection, and aren’t shy about it either.

If you have a home with kids, other pets, or have company over often, this is the type of cat that won’t mind at all and will be happy to make appearances often. Keep in mind, due to their overly trusting nature, it’s best to keep these cats strictly indoors. Seeing as they don’t know a stranger, someone could easily claim them as their own—and you wouldn’t want that!

Did you learn anything new and interesting about our feline friends? Share this article with another cat lover that you know so that they can learn something, too.

Why Is My Cat So Territorial?

Catham City’s Loveseat Is Perfect For Cats And Their Humans