Feline 411: All About The Egyptian Mau Cat Breed

Ever see a spotted kitty before? Well, chances are you saw an Egyptian Mau cat. Best known for its stunning coat, this exotic cat breed has a super cool history and personality.

Let’s explore all the facts about this fascinating feline! 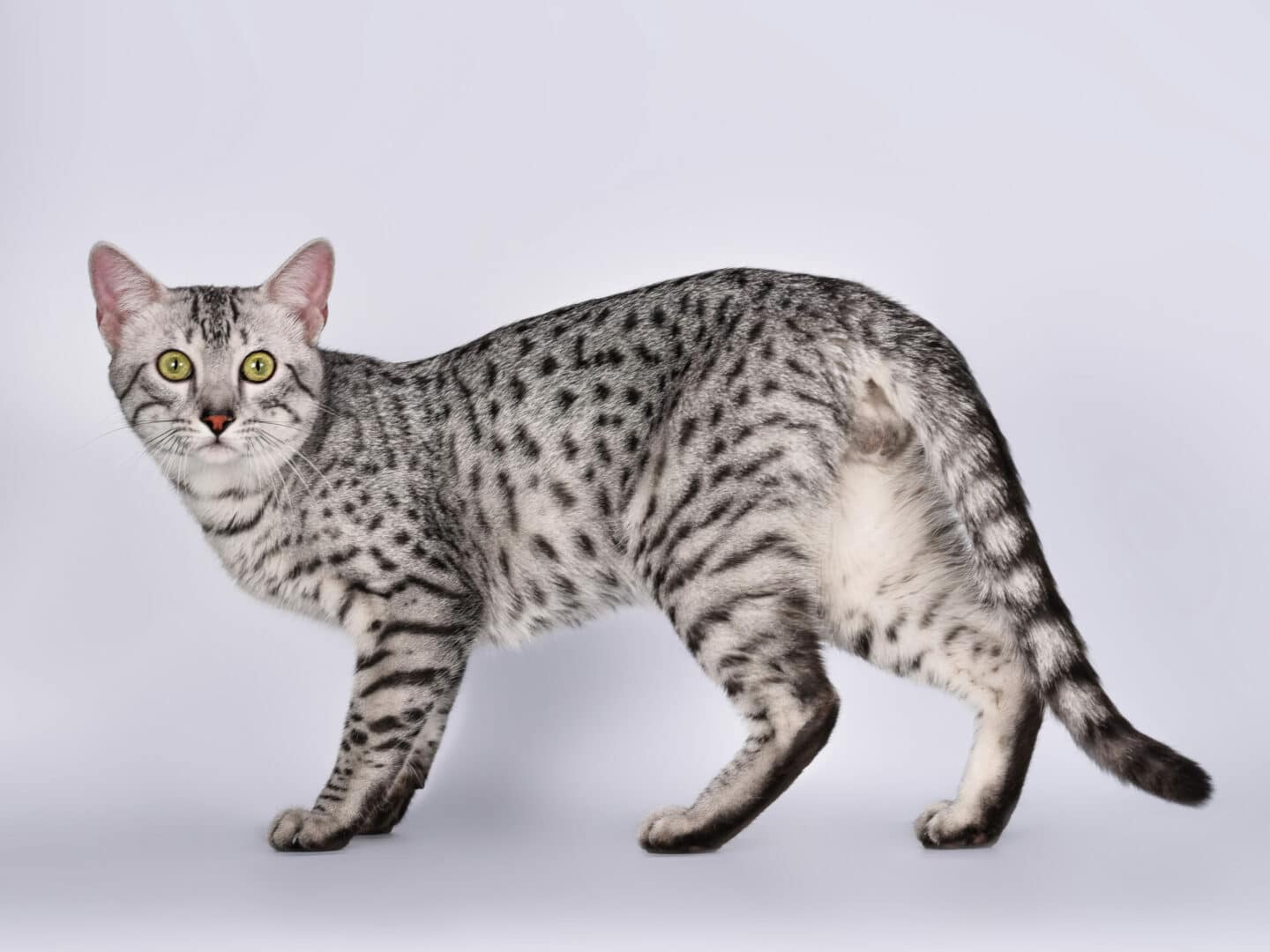 Egyptian Maus have a super ancient and Egyptian history

These cats get their name for a reason. The Egyptian Mau breed may have dated back to Egyptian times. In various pieces of Egyptian artwork, there’s a spotted cat to be found. That’s because cats were highly regarded creatures in Egyptian times. So much so, there was actually a cat cult in Egypt!

It goes beyond just cat cults. Egyptian gods were sometimes idolized in cat form. Archaeologists found a papyrus painting of the Egyptian sun god, Ra, depicted in the form of a spotted cat. The Egyptians even had a cat goddess named Bastet that they worshipped too.

Now, there isn’t 100 percent certainty that this spotted cat is the direct ancestor of the Egyptian Mau. But, few can deny their uncanny resemblance. And, as many Egyptian Mau owners know, these kitties definitely behave quite royally. 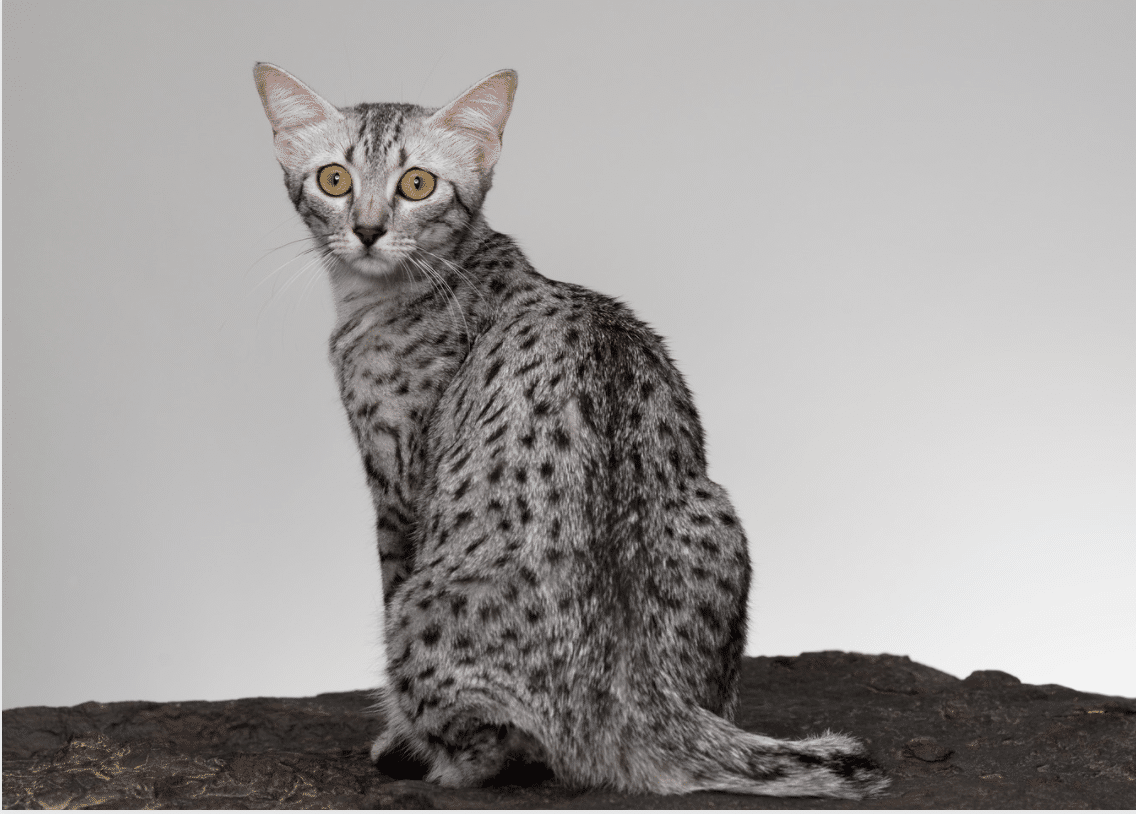 These cats are the only naturally spotted domestic cat breed

There isn’t any other domesticated cat breed with naturally occurring spots like the Mau! Of course, there are other cats that have spots on their coats. But, those most likely occurred out of strategic breeding. This isn’t true for the Mau – its wild cat ancestors had some strong genetics. Their spots most likely evolved as a form of camouflage while hunting, similar to their big cat relatives. This hints at the Mau’s inner hunter, making the spots on this cat breed truly one of a kind.

A Russian princess introduced the Egyptian Mau to America

It comes as no surprise that royalty was responsible for the Egyptian Mau’s popularity in America. Back in the 1950s, Russian princess Nathalie Troubetzkoy brought her adorable Egyptian Mau named Baba to America. A devout Mau lover, Troubetzkoy created a cattery to protect this rare breed and also promote its existence in America. 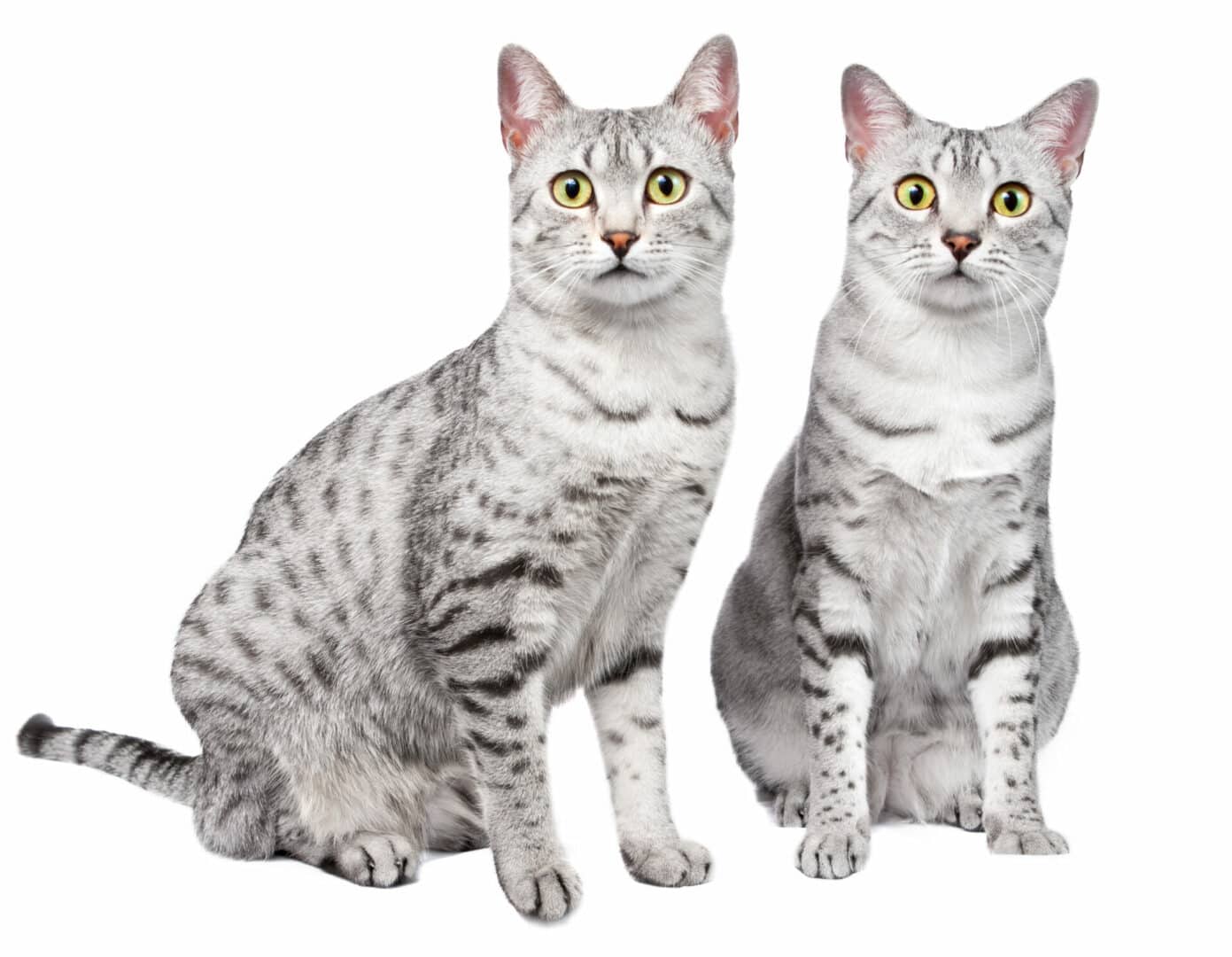 These kitties adore their human families

Just because they have a royal past, doesn’t make these kitties snooty! Egyptian Maus hold a crazy amount of affection for their human families. These cats are very loyal and will do anything to protect their human companions. This can become pretty clear when strangers are around. Don’t be surprised if your playful and sweet Mau kitty suddenly goes missing. Egyptian Maus are sensitive and really not fond of those who aren’t in their close circles.

No one can miss an Egyptian Maus gorgeous green eyes…

A Mau’s coat isn’t the only thing that’s eye-catching. This cat breed has a stunning gooseberry green eyes. Paired with their large size, you can’t miss an Egyptian Maus brilliant expressions. They’re always using their eyes to find something to play with. 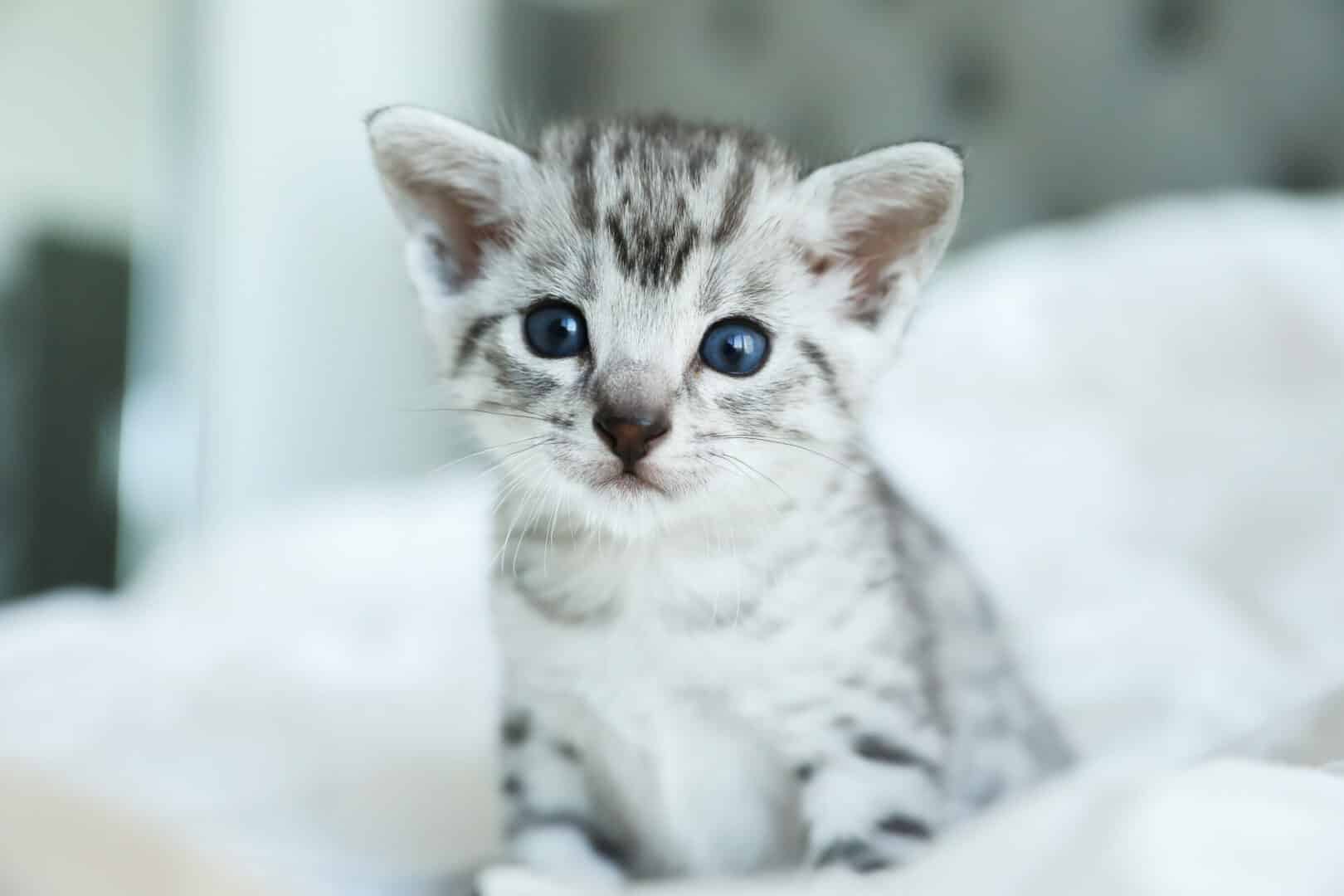 These cats are easy to groom

What many love about the Egyptian Mau is that this cat breed rarely needs a bath. This may come as a surprise, as one would think a pretty coat would require a lot of upkeep. Not for the Mau – their medium-length, fine-haired coat is simple to take care of. Brushing your Mau a couple of times a week is enough to keep this kitty looking pretty.

The Egyptian Mau can outrun most kitties (and humans too!)

We aren’t kidding around – the Egyptian Mau is the fastest cat breed in the world. These cats can run up to 30 miles an hour. That’s some super speed! We can thank the Mau’s hunter ancestors and supreme hind legs, both making the Mau a kitty not to mess with. 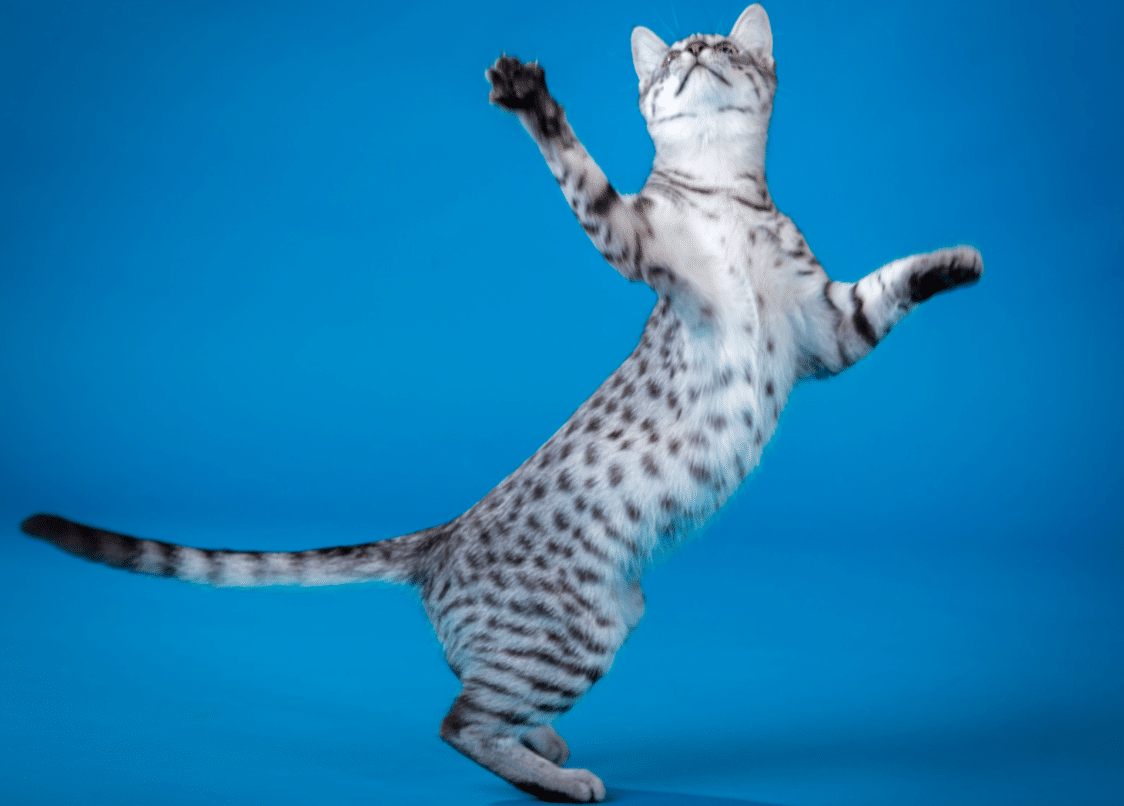 And, they absolutely love to play fetch!

As you can imagine, the fastest cat in the world can play a mean game of fetch. The Egyptian Mau’s playful nature, love of humans, and speed make for an awesome game of fetch. There is nothing a Mau loves more than catching something and bringing it back proudly to their human best friend.

Do you or anyone you know have an Egyptian Mau? Well, aren’t you lucky! This cat breed isn’t easy to find, and oftentimes, there is quite a waitlist with breeders. But, these cats and their exuberant personalities make it all well worth it. If you know someone with an Egyptian Mau, share this article with them so that they can learn a little more about their extra special kitty!

Toxic And Invasive Poison Hemlock Is Spreading Across US