Big Cat 411: All About The Snow Leopard

Beautiful and majestic, the Snow Leopard is one of the world’s rarest big cats, and there are said to be only 4000 snow leopards left in the wild. These cats are only found in the mountains of Central Asia, living thousands of feet above sea level.

You will be mind blown by how impressive these big cats are. Let’s learn a little bit more about these elusive and elegant felines! 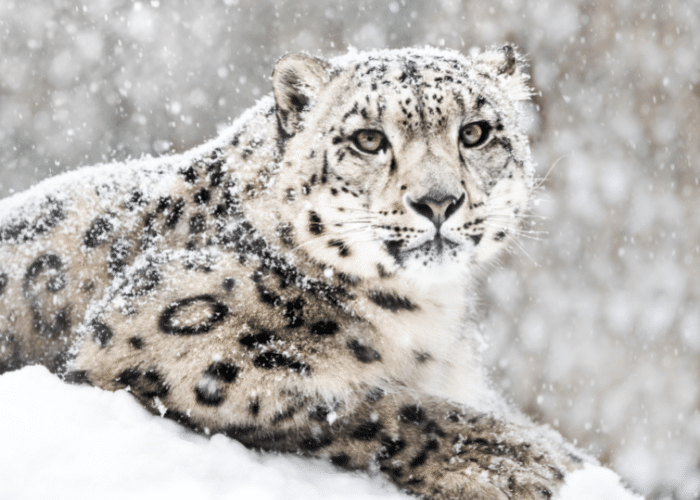 These big cats have a pretty cool nickname

Snow leopards are very evasive cats. It makes sense, as these cats live high up in the mountains where few people venture. This is how the snow leopard received the nickname ‘ghost of the mountains.’ Many who live near snow leopard habitats know these cats are around, but they rarely ever see them.

Another fun fact: snow leopards were once called ‘ounce.’ This name evolved from the French word l’once meaning lynx.

Snow leopards live way ‘above’ any other feline

One of the most impressive qualities about snow leopards is their survival skills. These cats live in the rugged mountain ranges of Central Asia. But, snow leopards aren’t living at the base of the mountain. These cats can live as high up as 20,000 feet!

So, how does a snow leopard manage to live in such high altitudes where oxygen is pretty limited? These cats have adapted their bodies to their environments. Over time, snow leopards widened their nasal passages and expanded their chest cavities, all to increase their oxygen intake. Isn’t that amazing? 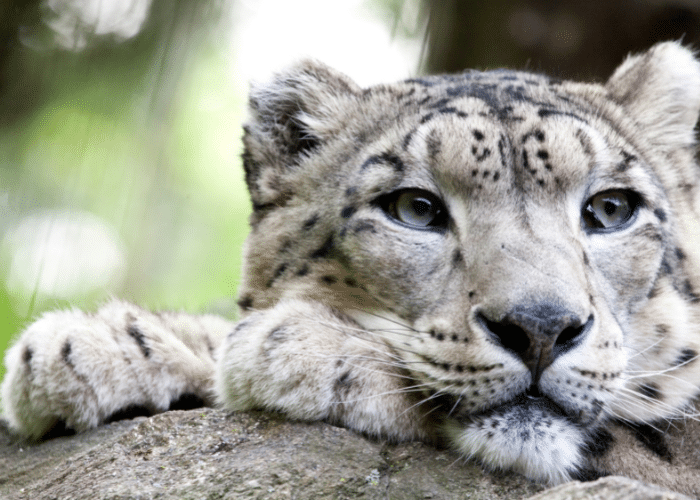 This is the most ironic fact about snow leopards. These cats are actually more genetically related to tigers than leopards. Both belong to the Panthera genus species. A genetic analysis study in 2010 revealed that snow leopards are the closest living relative to the tiger!

This is why the snow leopard has the densest fur of any cat. Their fur can be up to 2 inches thick. This is dense enough to protect the cat’s body in temperatures as low as negative 40 degrees Fahrenheit. That’s better than any Canada Goose jacket out there. 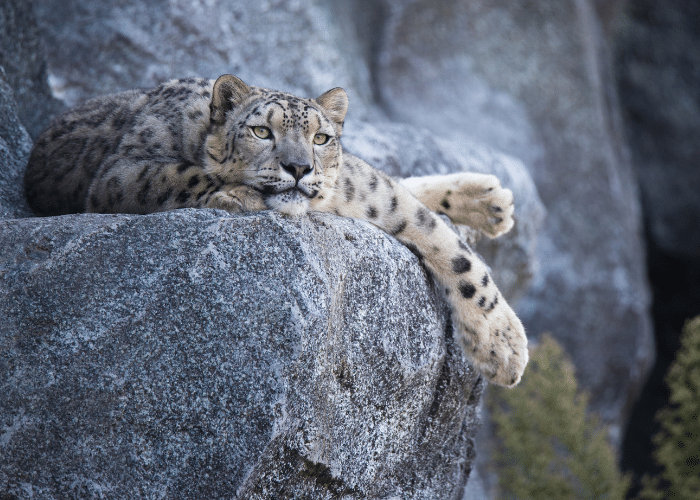 These cats prefer to be alone

Snow leopards are shy and solitary cats. They prefer to hunt and live alone. In fact, there isn’t a specific term for a group of snow leopards, like there is for other cats. I bet you didn’t know that a group of tigers is called a ‘streak’ and a group of lions is called a ‘pride.’ There are so many awesome big cat facts out there!

If you want to live in the mountains, you definitely should learn how to climb and jump. Although snow leopards are pretty burly animals, they can still jump up to a mind-blowing 50 feet vertically. Talk about survival skills! 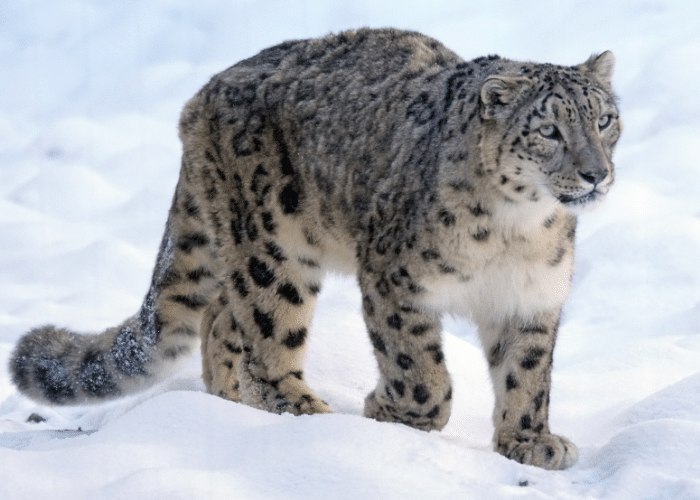 They have snowshoes for paws…

Another trait snow leopards developed to survive in the cold is their massive paws. These paws serve as snowshoes for these cats, helping snow leopards stay steady and balanced on icy ground. This is exceptionally important, as snow leopards often chase their prey.

You’d be surprised to learn that, despite their ferocity, snow leopards are most threatened by human beings.

Since snow leopards live so high up in the mountains, they don’t have any other natural predators. That changed over time as snow leopards began to lose their environment to climate change and human intervention.

This caused snow leopards to move outside their territory in search of food. This led them to nearby farms with livestock that could sustain a snow leopard and their active lifestyle. Of course, this didn’t leave farmers happy. Sadly, the initial human response was to attack back at the snow leopards, by leaving bear traps around their farms…

Thankfully, the intervention of the WWF helped to ban these traps, which were severely harming the snow leopard population. Today, snow leopards are no longer considered as endangered. However, they still maintain a vulnerable status as an endangered species. 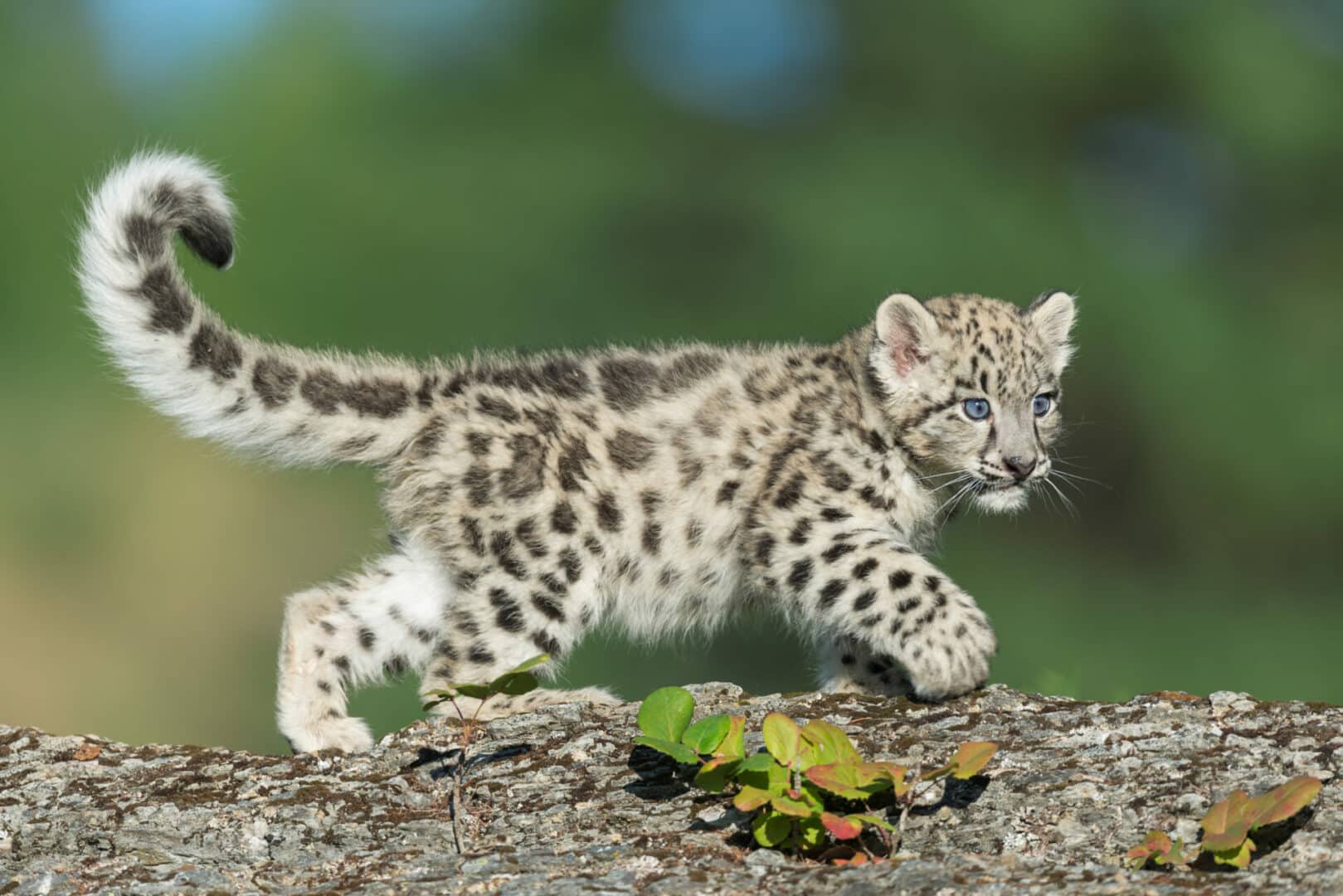 There is no other mammal like the snow leopard. These big cats are true survivors. And, they still need our support. Sharing the fun facts about snow leopards with others can help boost awareness about this big cat’s endangered status. Such an incredible animal should not go extinct.

Please feel free to share all the love and support for snow leopards in the comments below!