Your living room lion stalks those toy mice like he’s King of the Savannah. He leaps from sofa to armchair with his muscular limbs and might even let out a roar when dinner is two minutes late. It’s amusing to think of our domestic cats like they’re wild predators. The similarities between your pampered house pet and the big cats of the jungle, however, are much more than imaginary.

Scientists believe that all of today’s house cats evolved from a common ancestor. The most accepted theory is that millions of years ago, the feline lineage split, and we eventually ended up with the big cats in the wild and the small pets that prefer our living rooms over fending for themselves. And while a lot can happen in 10 million years, studies show house cats and tigers share 95.6 percent of their DNA. That number equates to a lot of similarities, and it’s fascinating to compare the cat napping in your sink to a leopard lounging in a tree.

Domestic cats and big cats have a lot in common. Here are some of the most interesting similarities. 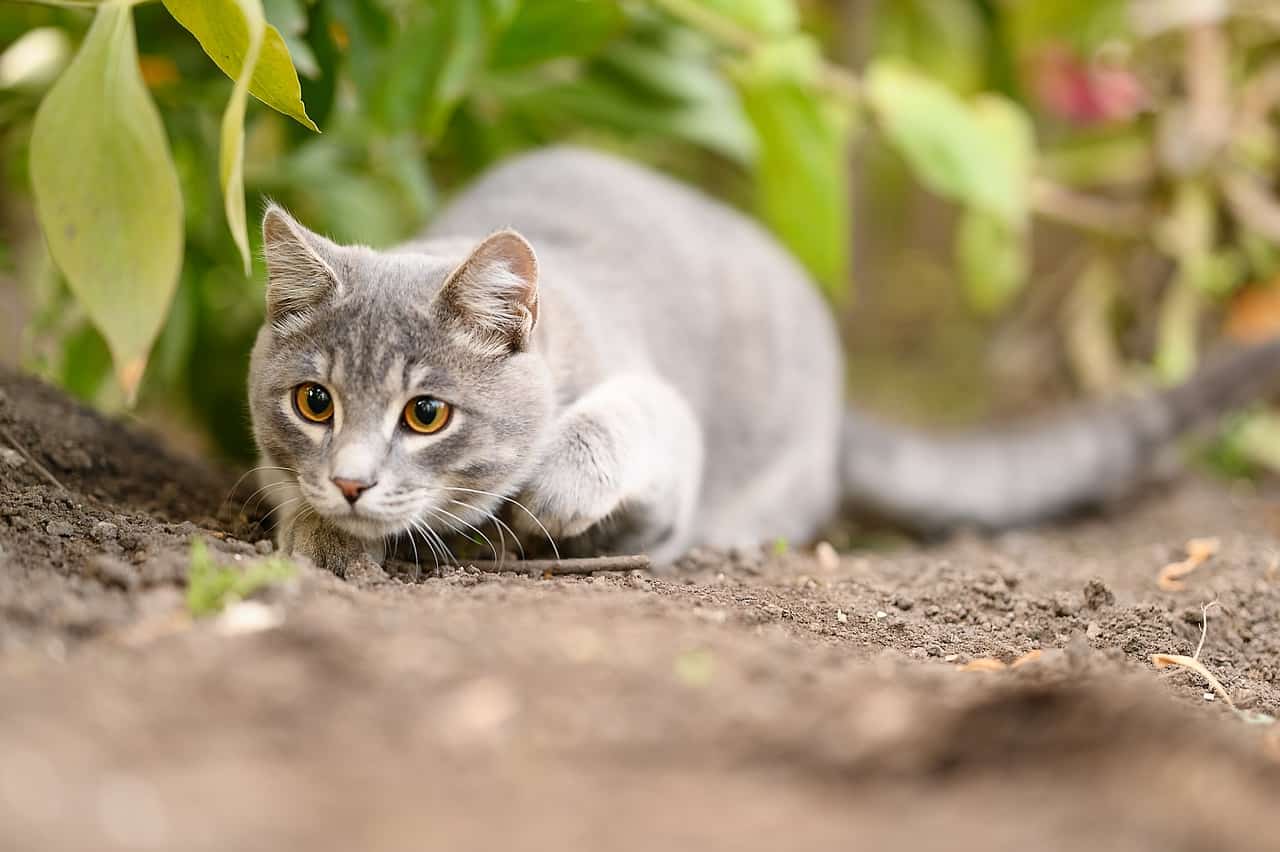 All you have to do is look at a big cat and domestic cat to see their anatomical similarities. Their bodies are built generally the same, just different sizes. They have powerful legs, flexible backs, sharp claws, and teeth. All of those components work together to make all cats skilled hunters.

And their hunting abilities aren’t all physical. All types of cats possess a natural instinct that tells them the most successful ways to stalk and take down prey. Lions, tigers, cheetahs, leopards, and all the other big cats hunt to survive. Tabbies, tuxies, and calicos can hunt for food if they need to, but they mostly do it because it’s fun and instinctual.

House cats rub against our legs, the furniture, trees, the walls—basically everything they can. We tend to consider this a cute attention-seeking behavior, but it has a more practical purpose. What they’re actually doing is rubbing their scent on things they consider part of their property or territory.

The rubbing allows your cat to leave behind scent markers that tell other cats to steer clear. Out in the wild, big cats do the same thing. They mark the boundaries of their territories by rubbing on trees, rocks, and each other. 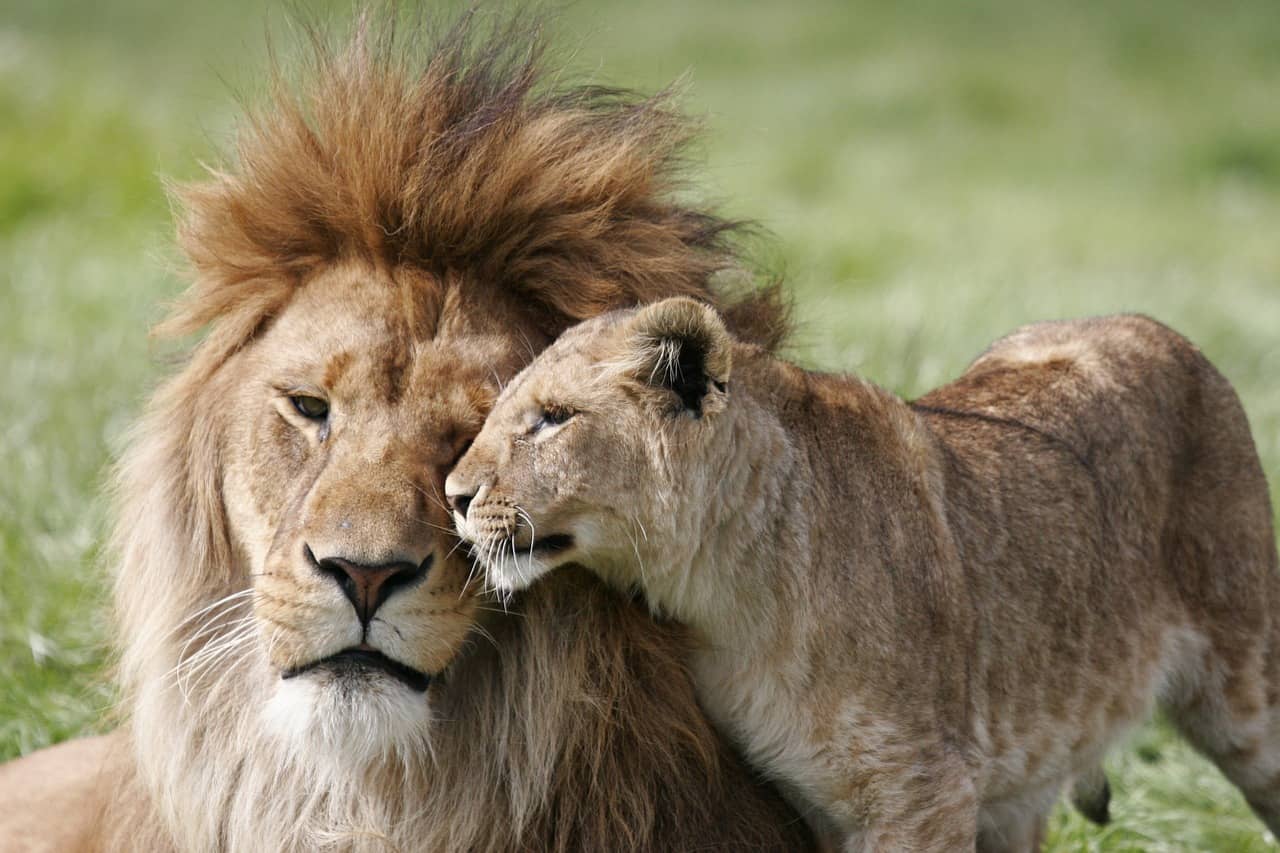 A tiger will probably turn their nose up to the hard kibble your cat regularly eats, but both big cats and house cats are carnivores. They survive on high protein diets and don’t need to eat things like fruits or vegetables. In fact, their bodies have trouble processing plants.

It would be inhumane to subject a cat to a vegetarian diet as they’re obligate carnivores, and the most species-appropriate diet for house cats is actually raw meat. You won’t catch a lion grazing on grass, and while your house cat might nibble on some green stuff, it’s not a necessary part of their nutrition. According to Nutriment – a raw cat food manufacturer, a cat’s system is designed to digest prey, and raw meat is highly beneficial to them.

Those claw marks on the wooden table legs and the shredded fabric on the couch are consequences of your cat’s natural instinct to scratch. They do it to file their nails, and it’s also another way to mark their territory. The physical marks and the scents left behind from the glands in their paws act as effective “no trespassing” signs.

In the wild, there is no spray bottle to stop wild cats from putting claw marks in anything they want. They do it for all the same reasons as your house cat. But for them, it’s more serious. Protecting their territory is a matter of life or death. 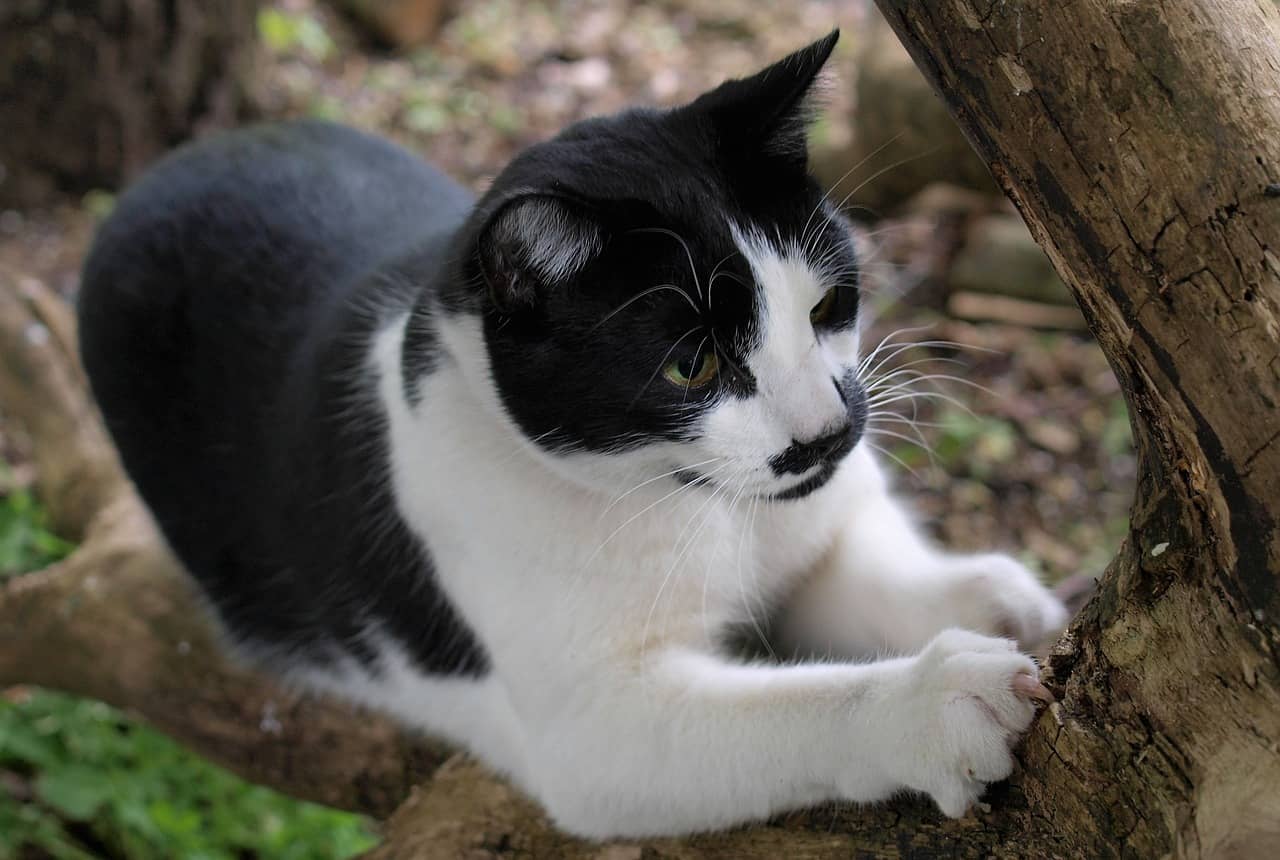 You aren’t a cat person until you’ve been woken up at 4 AM by a crazy cat doing sprints down the hallway. It happens because cats are crepuscular creatures. This means they’re most active between dusk and dawn.

In the wild, the low light of dusk and the darkness of night is the ideal time to hunt. A big cat’s eyes allow them to see in the dark a lot better than most of their prey. They use the lighting to their advantage, and when the sun is high in the sky, you’ll likely find them napping. Just like house cats, big cats love their naps and can sleep an average of 15 hours a day.

6. Their claws are retractable.

In addition to being sharp and potentially deadly, almost all species of cat (big and small) have retractable claws. The cheetah is the only species with semi-retractable claws, and that’s because they use them to burst into high speeds at a moment’s notice.

A cat’s ability to control their claws comes in handy in more ways than one. Claws come out when the cat is hunting or climbing. And when they’re resting or walking on solid ground, the claws retract to protect them from wear and tear. 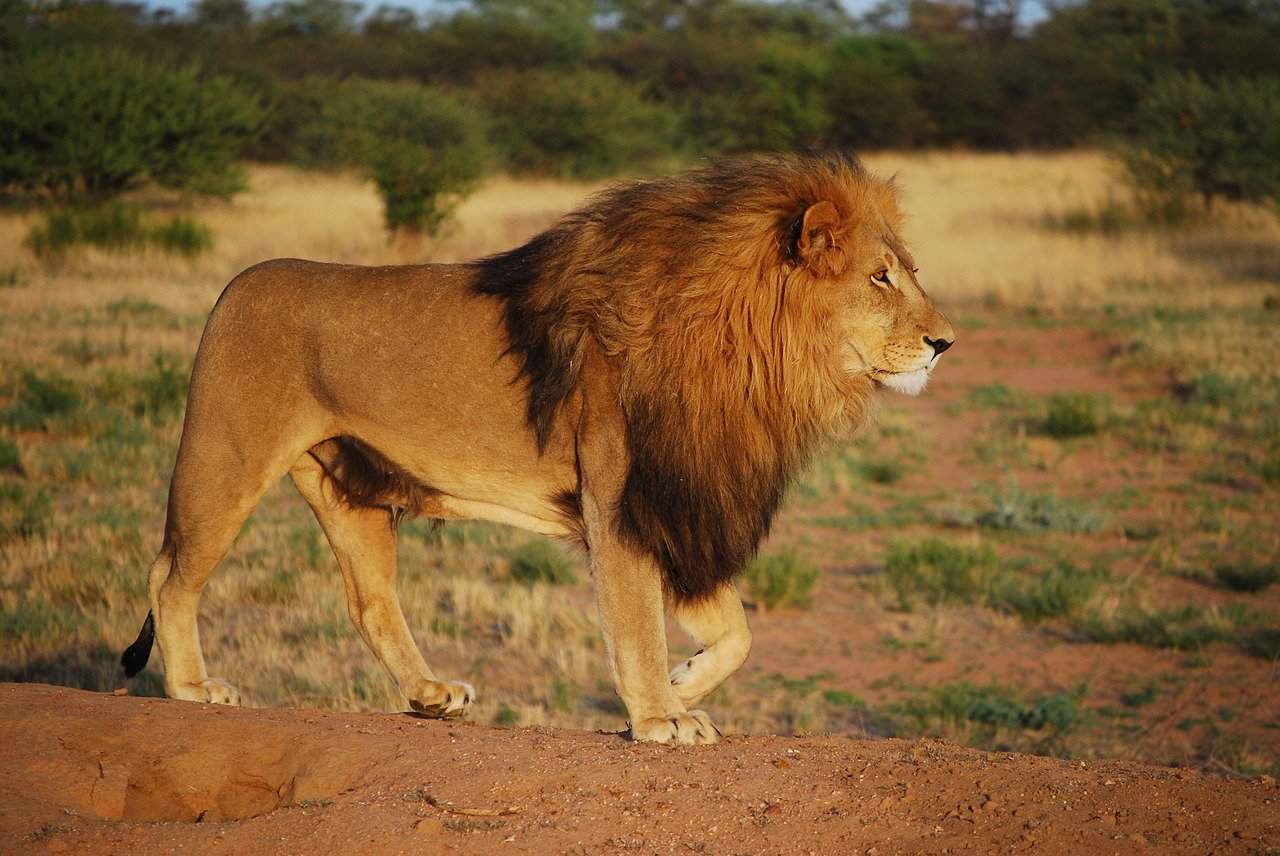 7. They have saggy bellies.

A life of luxury puts a lot of house cats at risk of being overweight, but those saggy bellies aren’t always about too much food and not enough exercise. Cats have what’s called a primordial pouch that hangs down in front of their hind legs. This extra flap of skin and fat has nothing to do with a cat’s weight.

Both house cats and big cats have primordial pouches for practical purposes. The flap of skin act as padding to protect their vital organs during fights, and it also stretches to allow more flexible movements while running and jumping. Take a look at a tiger in the jungle and the tabby in your kitchen, and you’ll see the similarities.

There are no catnip mice or feather wands in the wild, but that doesn’t stop big cats from playing like carefree house cats. Young cats usually like to play more than their adult relatives, but age isn’t as much a factor as you might think.

Big cat cubs play with each other to learn basic skills just like kittens wrestle with their litter mates. Big cats in sanctuaries and zoos have even proven their love of play by being curious about things like boxes and laser pointers. Big or small, it seems no feline can resist a good play session. 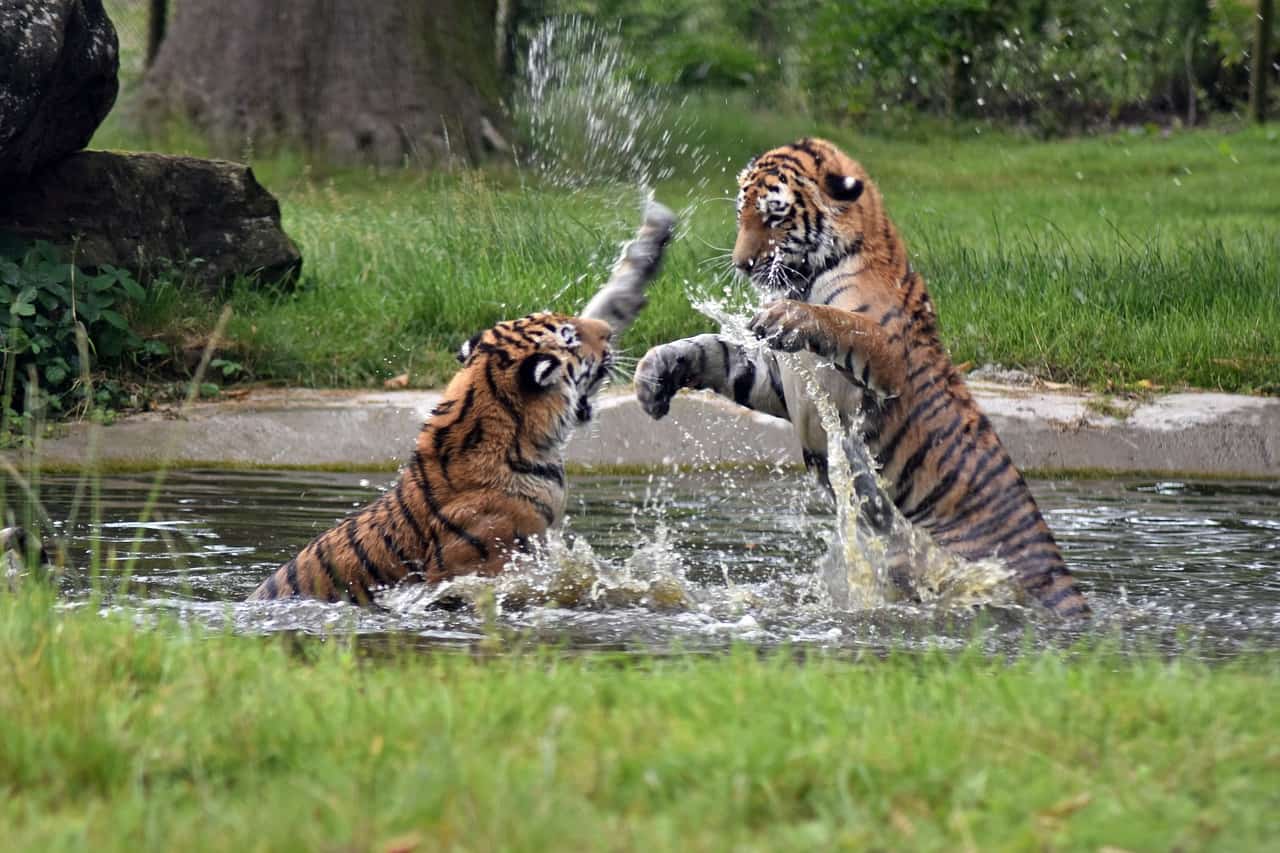 9. They have rough tongues.

You either love or hate the sandpaper feeling of your cat’s tongue against your skin. Much different than a dog’s tongue, a cat’s tongue is covered in little backward-facing barbs called papillae. Those little barbs help detangle knots and lift out debris from a cat’s fur. They also tickle your skin when your cat decides to turn their grooming attentions toward you.

Hopefully you never get close enough to feel the swipe of a big cat’s tongue. But if you do, you’d feel the similarities between that wild animal’s tongue and that of your friendly house cat’s. Lions, tigers, jaguars, and all the other big cats have the same barbs on their tongues as domestic cats. The rough texture helps with grooming and also pulls meat off the bones of their prey.

Making biscuits isn’t only for domestic cats. This adorable kneading behavior starts when cubs and kittens move their little paws while nursing to stimulate milk flow. And as they get bigger, the habit turns into a signal of relaxed contentment.

Whether that baby grows to be a 10-pound house cat or a 600-pound tiger, that kneading behavior sticks with them. No one knows for sure why this behavior follows cats into adulthood, but scientists have observed big cats kneading both in the wild and in captivity.

Big or small, domestic or wild, cats of all kinds are part of the same family. So the next time you look at your feline friend, it won’t be hard to imagine them living life in the wild. 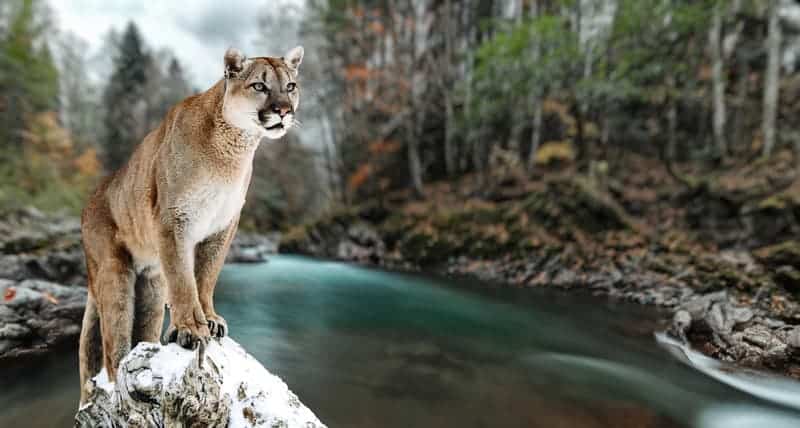 Did you learn anything new and interesting about our feline friends? Don’t forget to share this article with other cat lovers that you know so that they can learn something, too.

Why Don’t Cats Like When You Touch Their Paws?