For many cats that find themselves lost, they won’t always have an owner that searches for them. Cats wind up missing all the time, and without a microchip, the chances of them being reunited with their owners are slim to none. For one gorgeous tuxedo cat named Barcode, she found herself lost and scraping by. She survived by eating mice and whatever else she could find…which soon transformed into some tasty cat kibble courtesy of a kind couple with a heart for cats in need.

And, as they say, the rest is history—but not without a lot of hard work, dedication, and patience to help Barcode to get healthy and come out of her shell. Now, she never has to go hungry again, and as you can see from her beautiful photos, she has no complaints about that! 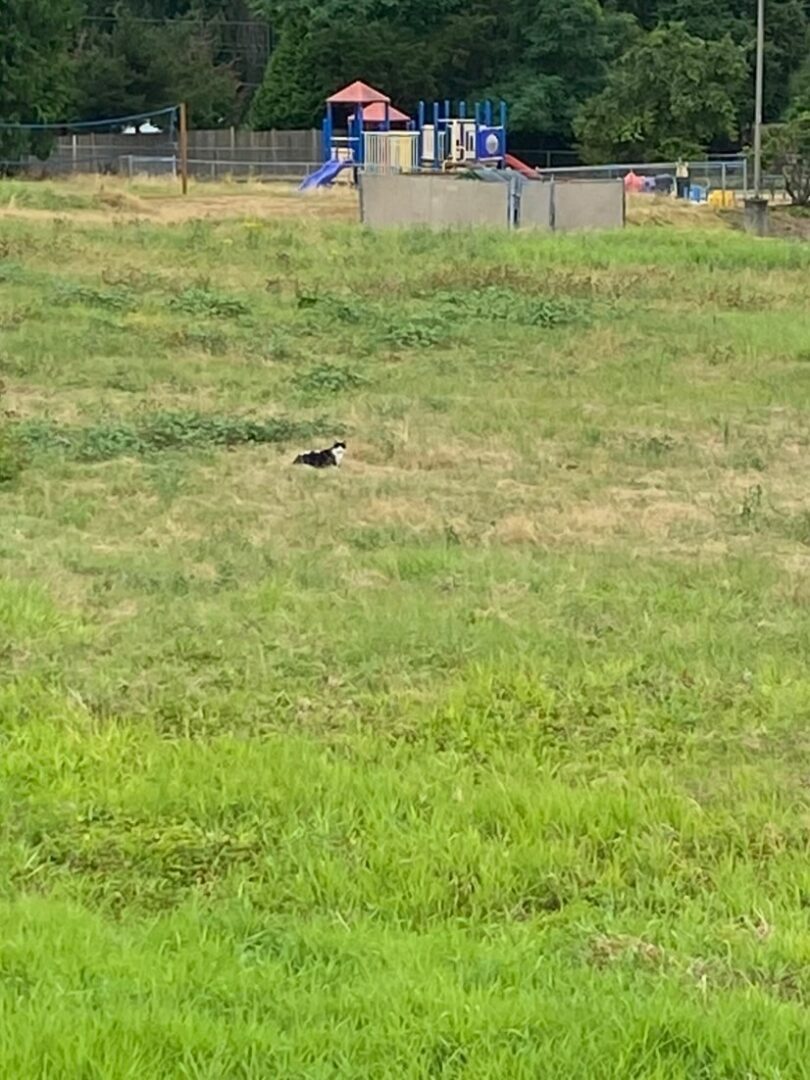 How did Barcode come into your life?

We bought a house and in August, soon after moving in, we saw a tiny black and white cat in the field behind our home. It looked thin and hungry and was hunting mice for food. This broke our hearts and not being able to turn a blind eye, we put some kibble out on the other side of the fence for it. Later that day we saw it had found and eaten the food. Barcode was not the only cat we saw, so we started putting out wet and dry food and bought a small security camera to see who we were feeding. When we saw the little black and white cat was showing up regularly, we named it “Barcode.”

I (Cerise) would get security video alerts at work and text Jim it was time to put out more food. He’s a dedicated cat daddy and totally on board with helping out cats any way we can.

We never thought we would be able to touch Barcode but clearly she needed meals and we decided we could love her from a distance. She slowly gained trust in us and started hanging around instead of bolting when she saw us. Then she started talking to us when it was mealtime. Cerise took a chance one day and petted her. Next, Jim petted her and was even allowed to touch her tail. 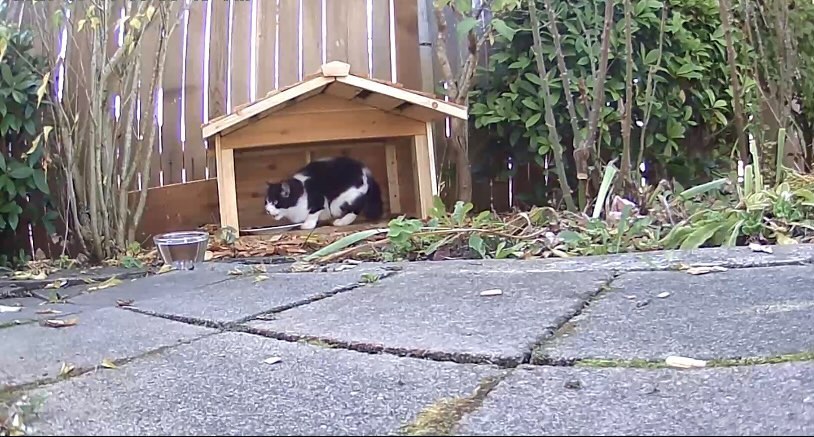 With winter coming and temperatures dropping it was decided we were going to bring her in. On November 6, we set up the empty mother-in-law space and made it a cat paradise. Hidey places, cat trees, boxes, comfy blankets, and a litter box. When Barcode came for lunch I just picked her up and brought her inside.

She hissed once. Did we make the right decision? We knew not all cats want to be indoors. Half an hour later we went in to visit and found she was neither bouncing off the walls nor hiding. Instead, she was plopping over for petting, giving headbutts, purring up a storm, and seemed incredibly grateful to be rescued. 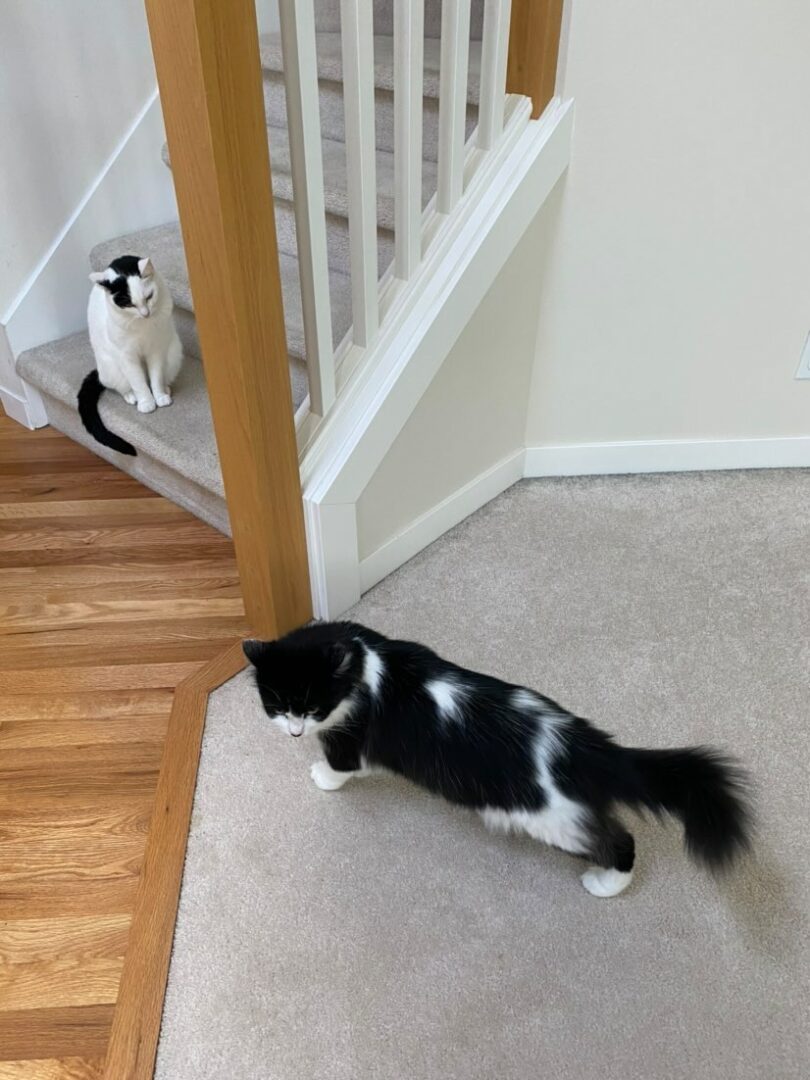 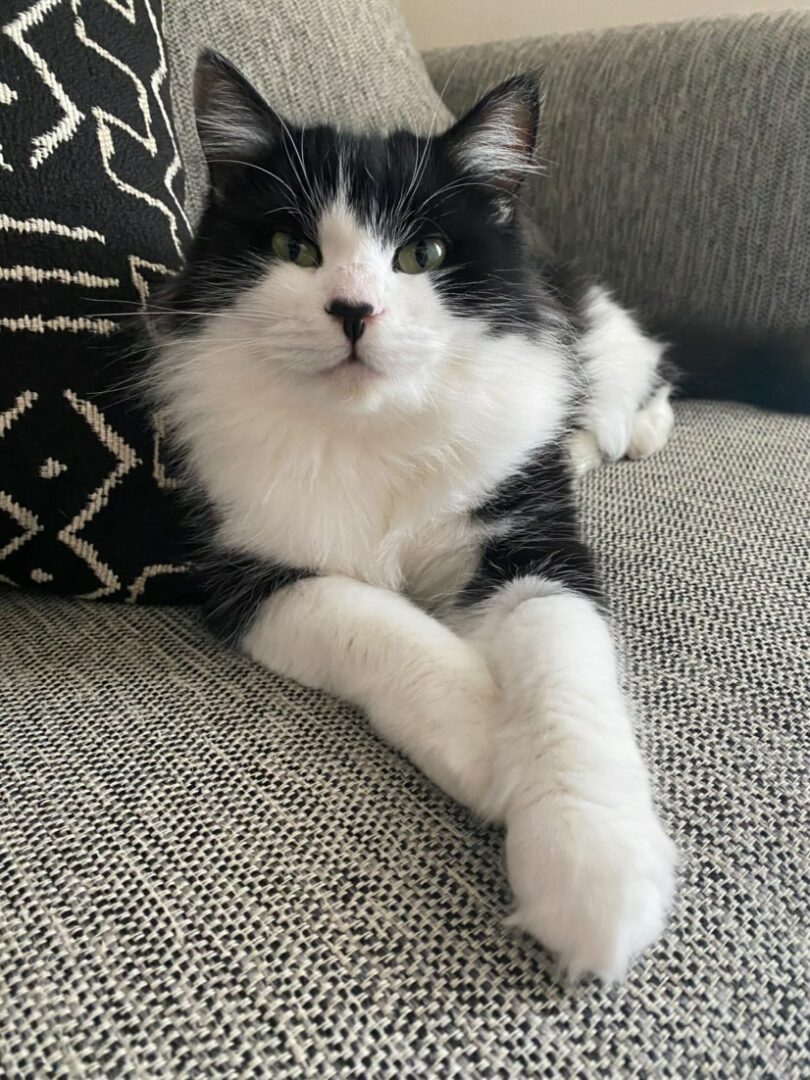 How did you come up with her adorable name?

Not knowing the gender of the cat when we first saw it we wanted a gender-neutral name. Because the kitty was initially quite skittish and shy, we could only observe from afar. We noticed markings on the back that looked like a sku and came up with the name Barcode.

Barcode is a sweetie! She is quite gentle by nature and trusting. She’s a vocal girl who loves to flop around to solicit pets, enjoys neck scritches, and has an adorable purr. 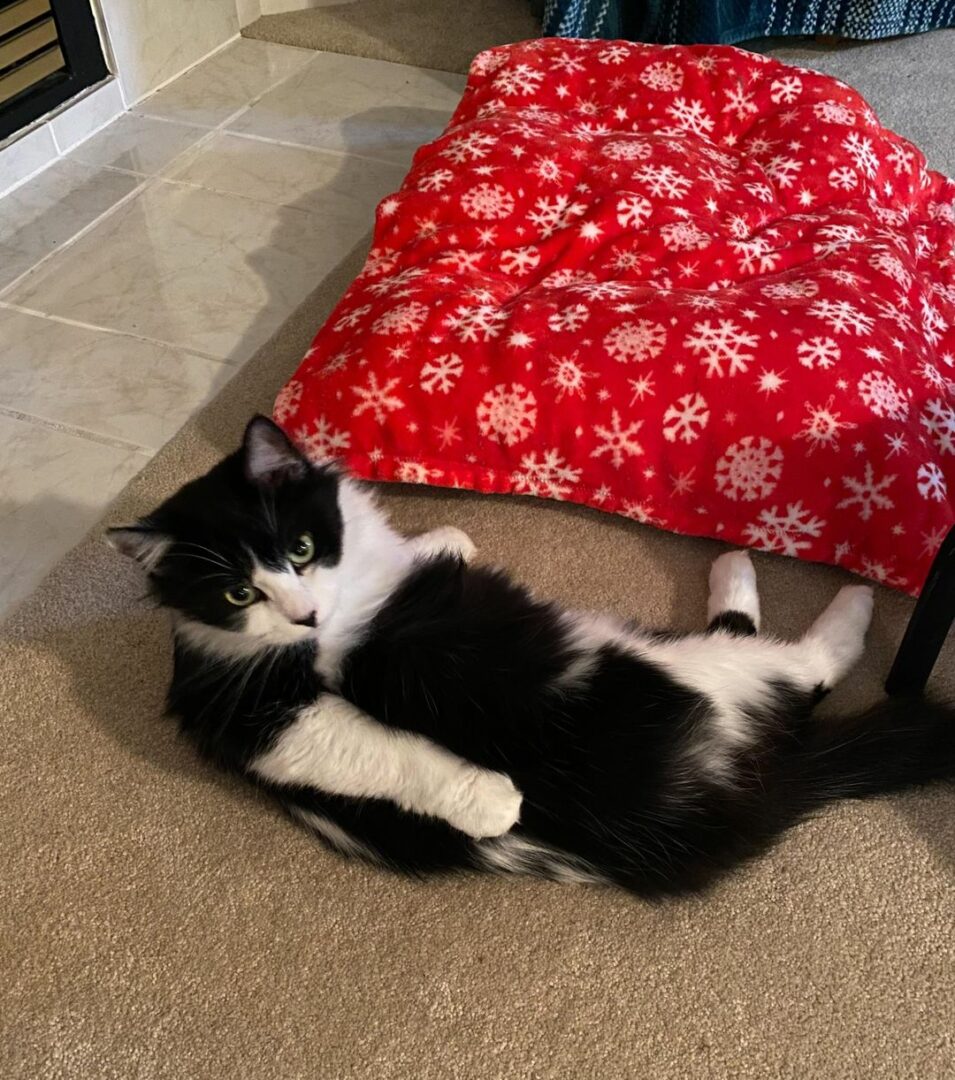 Do you believe that she is a feral kitty or likely a stray?

We thought she was feral at first. Given her level of trust and comfort with us, it’s more likely she’s a stray or was dumped at some point. Her behavior indicates she had been socialized with people at some point. Since ferals typically don’t talk to people, her talking to us is also a good indicator she wasn’t born feral.

When she went in for her spay surgery she was in heat! The vet estimated her to be just a year old, said she looked to be late postpartum and might have older kittens somewhere. Lucky for her, now there will be no more pregnancies or kittens born into the wild.

The vet was right about her having kittens. We spotted kittens on the camera soon after catching Barcode. They have the exact same short stubby legs as her! We have been trying to trap the kittens but at the time this is being written have not yet been successful. We are not giving up on getting them safely inside. We are feeding two other kitties who appear feral and plan to work on getting them trapped and altered. 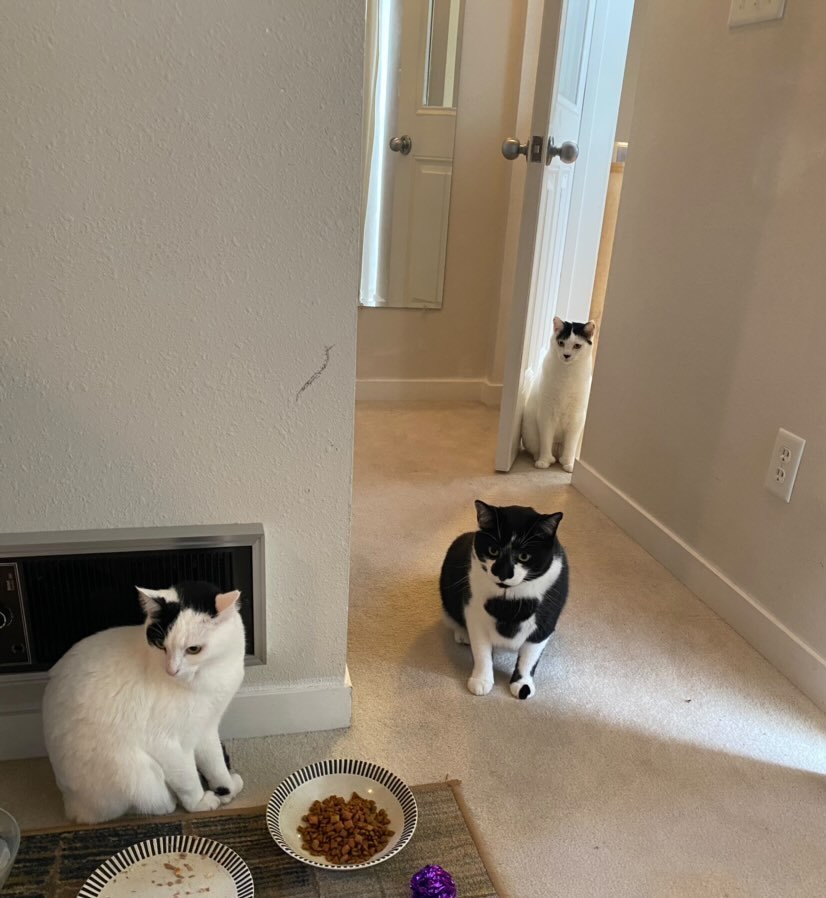 How are the introductions going for her with your other beautiful cats?

There have been growls and hisses but nothing aggressive. We took introductions slow and the result is remarkable! We have a big house and there is room for them all to coexist. It is sort of funny that of our four other cats, three of them are black and white like her. Her kittens look like our cats, “The Dumplings”, Gyoza and Gnocchi. Rascal is a big 20-pound black and white boy and Jinxy is a 15-year-old tabby.

What’s something special you’d like people to know about Barcode?

Barcode was an outside cat, trying her best to survive and care for her kittens. We feel like she chose us to help her. Now safely inside, she has no desire to go outside. We’ve had a lot of firsts with Barcode, who is extremely grateful to be loved and spoiled. She adores corrugated scratching pads, cat trees, toys, and catnip. We love our new home and feel we were given this house for a reason. 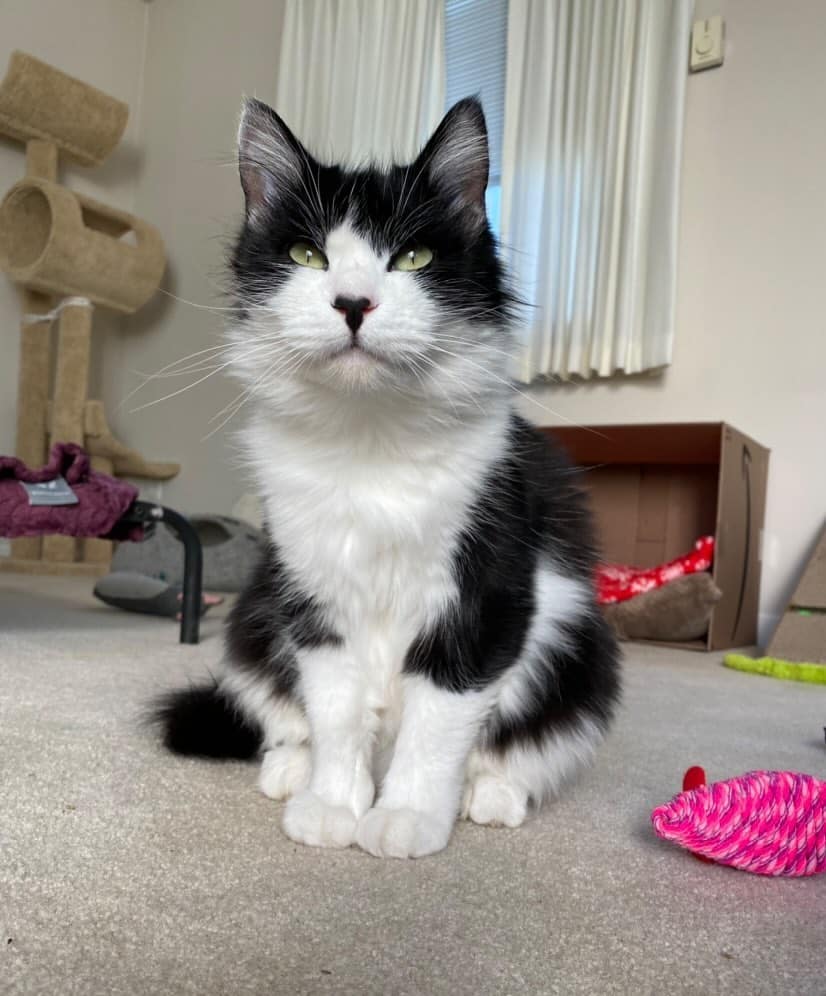 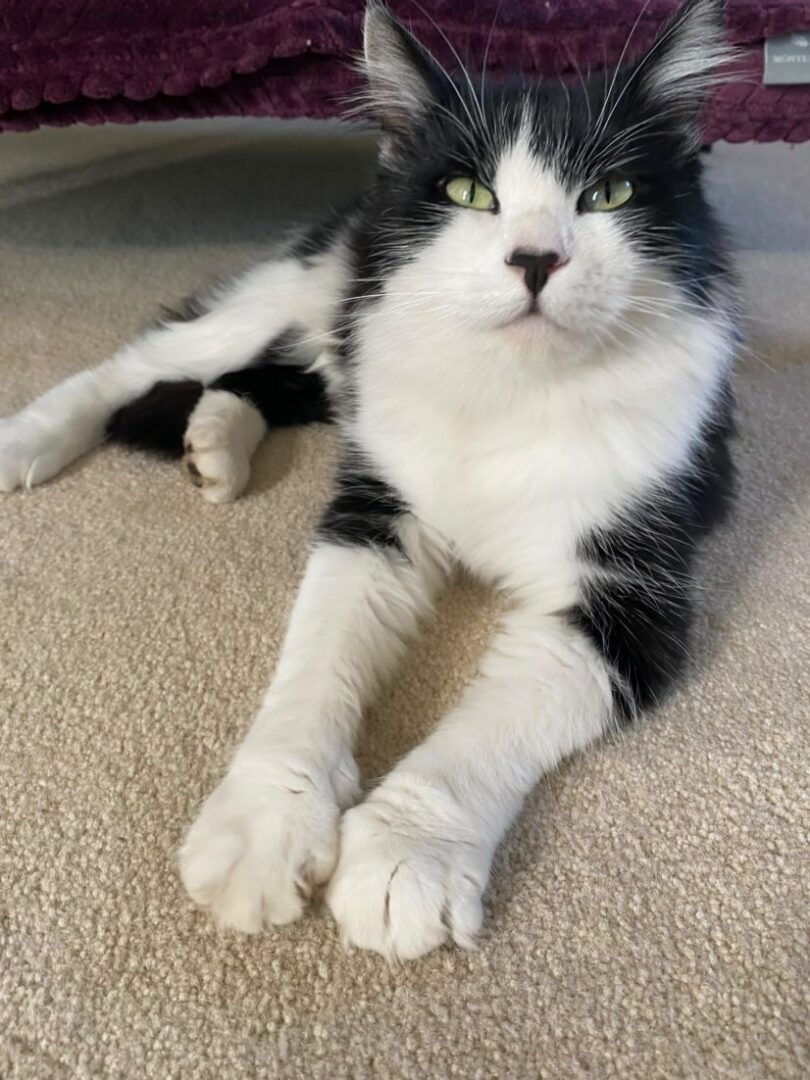 I’d like to give a special “thank you” to Jim and Cerise for allowing me to share Barcode’s heartwarming story with all of the Cattitude Daily readers. The world could certainly use more amazing people like them! For more on this gorgeous stray turned spoiled house cat, check her out on Instagram here.