Feline 411: All About Russian Blue Cats

Those dazzling green eyes that light up a room, and a coat that shines like a silver gleam, the Russian Blue is a striking cat breed in a class all its own. It comes as no surprise that these cats are from Russia, but there are many interesting things to learn about these “blue” felines. Here I’ll share with you all about these Ruskie felines! These cats are believed to be the most “hypoallergenic”

The HypoCat cat allergy vaccine isn’t out quite yet, so for some cat lovers to be able to have a cat, they must go with one that won’t trigger their cat allergies. For purebred Russian Blue cats, their bodies naturally produce significantly less of the protein Fel d 1 that is the trigger for cat allergies. With that being said, it’s still important to note that no cat breed or mix is truly 100% hypoallergenic. But the Russian Blue cat breed is definitely considered to be one of the most hypoallergenic breeds of cats.

Interesting Russian breeds cat fact: Strange coincidence or not, but the Siberian, which is actually the official cat of Russia, is also thought to be hypoallergenic. 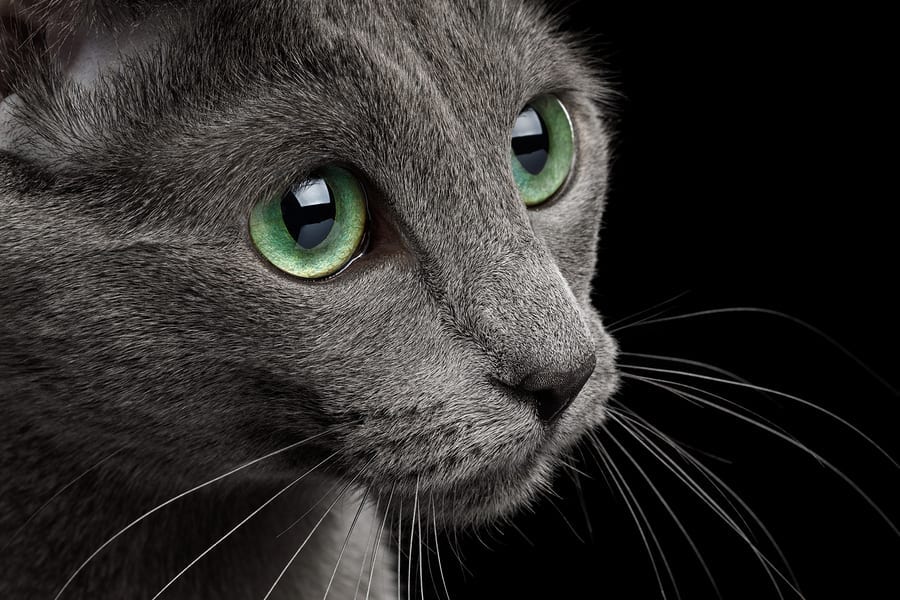 Fun Russian Blue kitten cat fact: When kittens are born into this world, they always always have blue eyes. But did you know that a purebred Russian Blue kitten will have yellow when they are born? Once they turn about four months of age, their pupils will begin to develop a vibrant ring of green around them. Well, a purebred Russian blue has a dense double coat, and true to their breed, they are always shorthaired. However, another breed is a variation of the Russian Blue. The Nebelung cat breed is the long-haired variety of the Russian Blue, but it’s rare and it’s likely that you’ve actually never seen one in person. The name of the breed has German origins, translating to “creature of the mist”—a reference to their mesmerizing silvery-blue coat that appears as if it’s floating over the body of the cat. A newer cat breed, the first litter of the Nebelung cat breed was brought into the world in 1986. Check out a brief story on the Nebelung cat breed courtesy of PetMD.com:

The story of the Nebelung breed began in the early 1980s when Cora Cobb, a computer programmer, gave a black domestic shorthair named Elsa to her son as a gift. Elsa later mated with a Russian Blue, producing a litter of five black and blue shorthairs. However, there was one kitten that had long blue hair. Cobb kept this curious male cat named Siegfried, and when Elsa gave birth to Brunhilde, another blue longhair, she also took it home. These two cats would be the first Nebelungs. 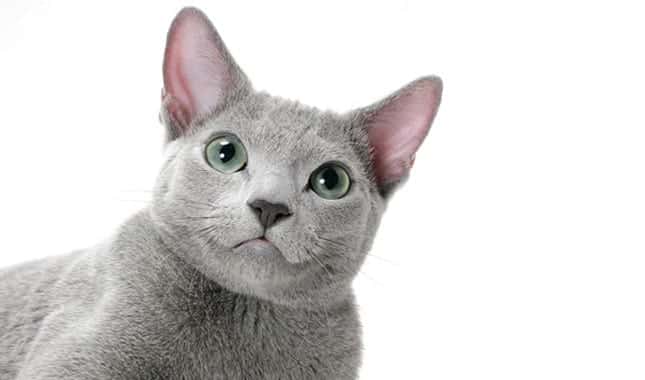 It should come as no surprise that a cat this beautiful is synonymous with royalty! There are a few old myths surrounding the breed that have been told for centuries. And many of the powerful czars of Russian history kept these cats as pets. The New Yorker says that Catherine the Great even kept hers as exclusively indoor house pets. Many royals believed that keeping a Russian Blue cat would serve to protect your family, and ensure your health and safety, especially for that of the royal children. 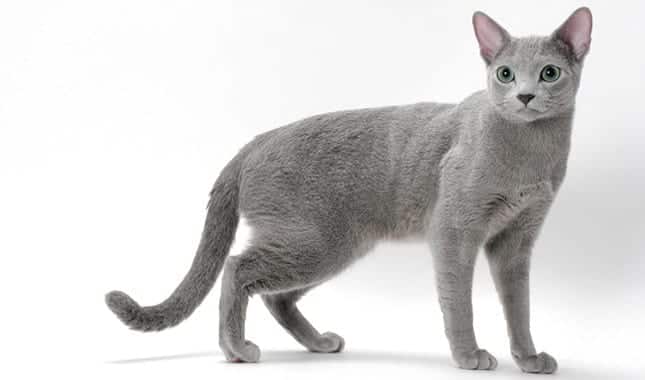 Despite their royal pedigree, not much detail is known concerning their exact origination. However, these “Archangel cats” were believed to have originated in northern Russia on the Archangel Isles. Legend has it that British sailors were captivated by their undeniable beauty, and brought these cats home with them from the White Sea port town of Archangel (Arkhangelsk) in northern Russia.

Despite their beauty, these skilled hunters didn’t mind getting their paws dirty. They proved themselves quite useful by taking their royal varmint catching skills very seriously around the palaces in which they lived!

One owner cats—and they run a tight ship!

This medium-sized cat breed is loving, loyal, and even-tempered. But if you have one, know that this is a cat for life. This breed is not only sensitive, but they also do best when they stay on a strict schedule with no changes to their routine. There have been countless stories told by owners of Russian Blue cats of their felines demanding meals at the same time, playing at the same time, being let out at the same time, etc. The internal clock of these felines is super strong, so to keep them happiest, you best appease them! And if you like sleeping in—don’t get them used to meals at 6 AM or you’ll be sorry when you’ve got a demanding cat in your face while you’re trying to sleep in on the weekend. 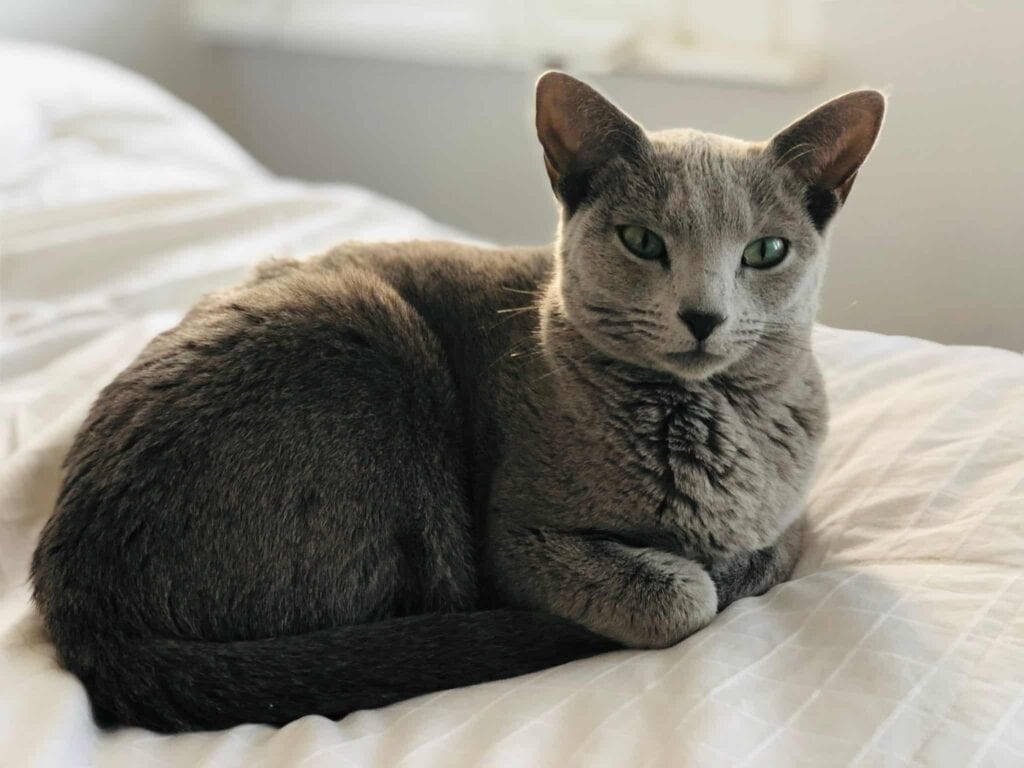 Looks can be deceiving…

This medium-sized cat looks larger than it really is thanks to that thick double coat of theirs. And don’t let their lovely appearance fool you, these cats are tough, smart, and eager to please and learn new tricks. While these cats can sometimes be nervous around strangers, they are very attached and at times demanding of their owner’s undivided attention. So much so, these little sneaky felines will fake being sick or hurt as a means to get the attention they crave!

Move over, Mona Lisa, the Russian Blue has a smile that everyone can’t help but admire.

Learn all about these blue kitties over on the Cattitude Daily YouTube Channel! 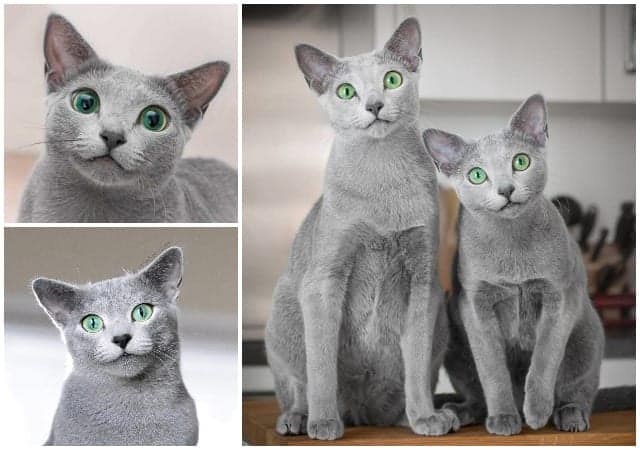 These Cat Hats Are The Cutest Solution To Feline Shedding

For The Past 7 Years, This Cat And Horse Have Been Inseparable