Home Cat Behavior Why Does My Cat Love The Faucet Water?
Cat Behavior

Why Does My Cat Love The Faucet Water?

Your cat’s water bowl is sitting right there on the floor–completely full of clean, fresh, and perfectly room-temperature water. And yet you catch your thirsty feline sticking their tongue under the kitchen faucet as you wash dishes. Or maybe she waits patiently for you to get out of the shower so she can lap up moisture in the tub. Some cats will even go to the extreme lengths of getting into the shower with you when the water is running. Why do they do it? If this sounds like your cat, you’re not alone. A lot of cat moms and dads have expressed concern that their cats would rather drink from the faucet than their actual water bowls. It’s a relatively normal behavior for cats, and there are a few interesting reasons why it happens.

Your kitty is a rock star when it comes to seeing in the dark. Cats have a higher number of rods in their retinas than humans do, and this allows their eyes to detect even small amounts of light. They’re also pretty good at detecting movement. What they’re not so good at, however, is seeing standing water. Water sitting in a bowl is completely clear (at least it should be). You can see straight down to the bottom of the bowl, and some cats don’t like that. They like to know exactly where their water is. This is also why you sometimes see cats touch water with their paws before they drink. Their paw makes ripples, and that makes the water easier to see. Water is also easy to see when it’s coming out of a faucet. Moving water is more noticeable, and it has the added benefit of being noisy. Cats that drink from the faucet can use all their senses to know exactly where the water is and where it’s coming from.

2. The water bowl might be in a bad spot.

Most people put pet dishes up against the wall so they’re not constantly tripping or stepping over them. That makes sense for us humans, but it’s not always ideal for the cat. Putting their back to the room can make some cats feel vulnerable. The chances of a predator attacking your cat in the kitchen are (hopefully) nonexistent, but that doesn’t change how your cat feels.

It’s instinct to protect their backsides and avoid being cornered. If you have other pets in the house that your cat doesn’t get along with, this instinct could be going into overdrive. They could be convinced that the communal “watering hole” is not a safe place, and they’re better off getting water wherever else they can find it. 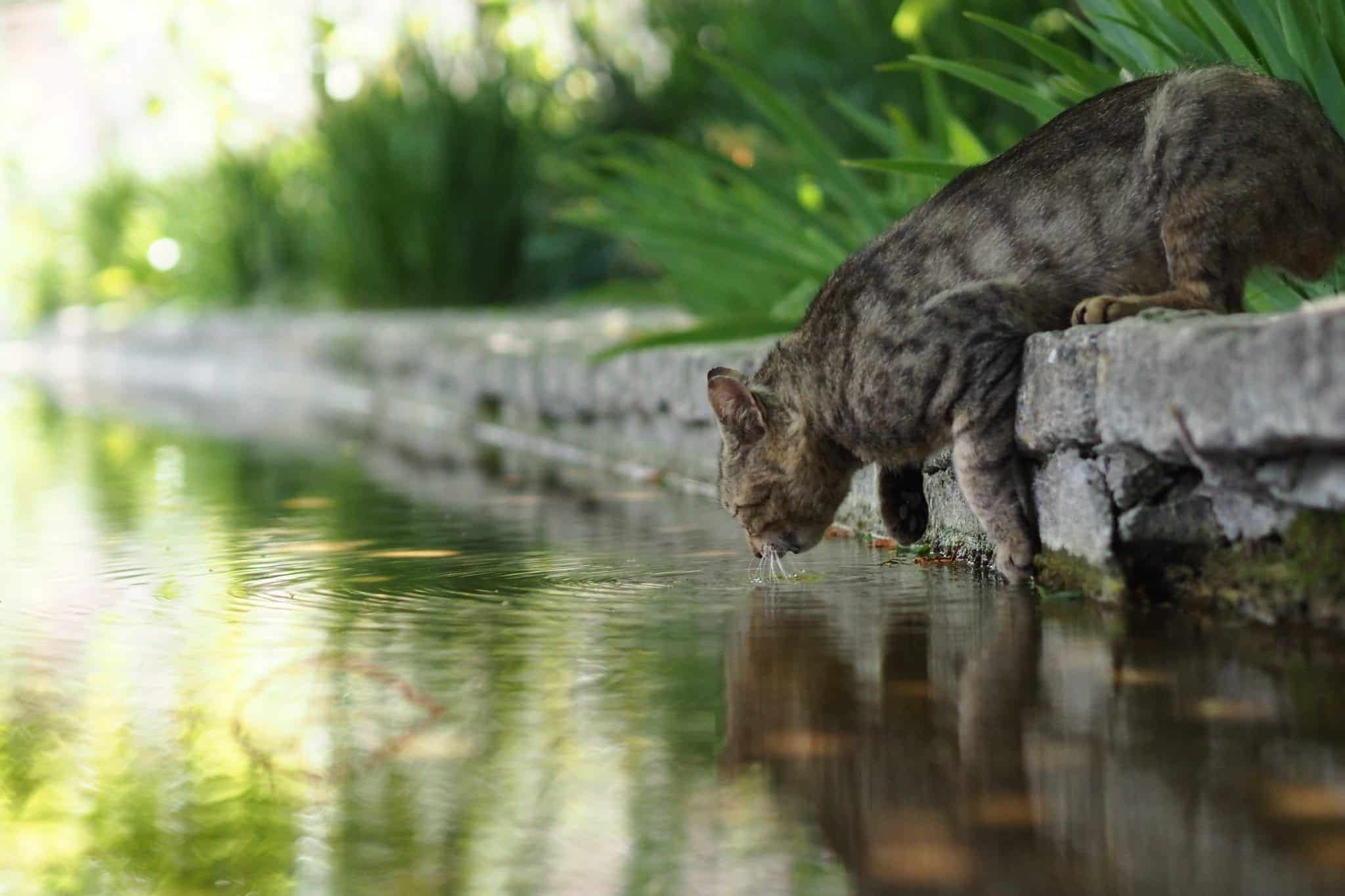 Back when cats slept outside instead of in our beds, they had to rely on their instincts to protect them from predators and other dangers. Their instinct to never leave their back unguarded is an example, and they also had innate knowledge that standing water has a high risk of being contaminated.

Standing water could be riddled with bacteria, parasites, mold, and a long list of other potentially dangerous things. You can tell your cat all day long that the water you put in their bowl is the same that comes out of the sink, but they won’t believe you. Running water will always be the safer bet.

Some cats are picky eaters, and some cats drink from the faucet because they’re picky drinkers. Water is probably your cat’s only way to quench their thirst, and it makes sense that they prefer their beverages to be as tasty as possible. Running water is typically cooler than water that’s been sitting in a bowl. It’s also more oxygenated, and that can make it taste better. Once a cat learns the difference, they’ll choose the better-tasting option every time they get the chance. 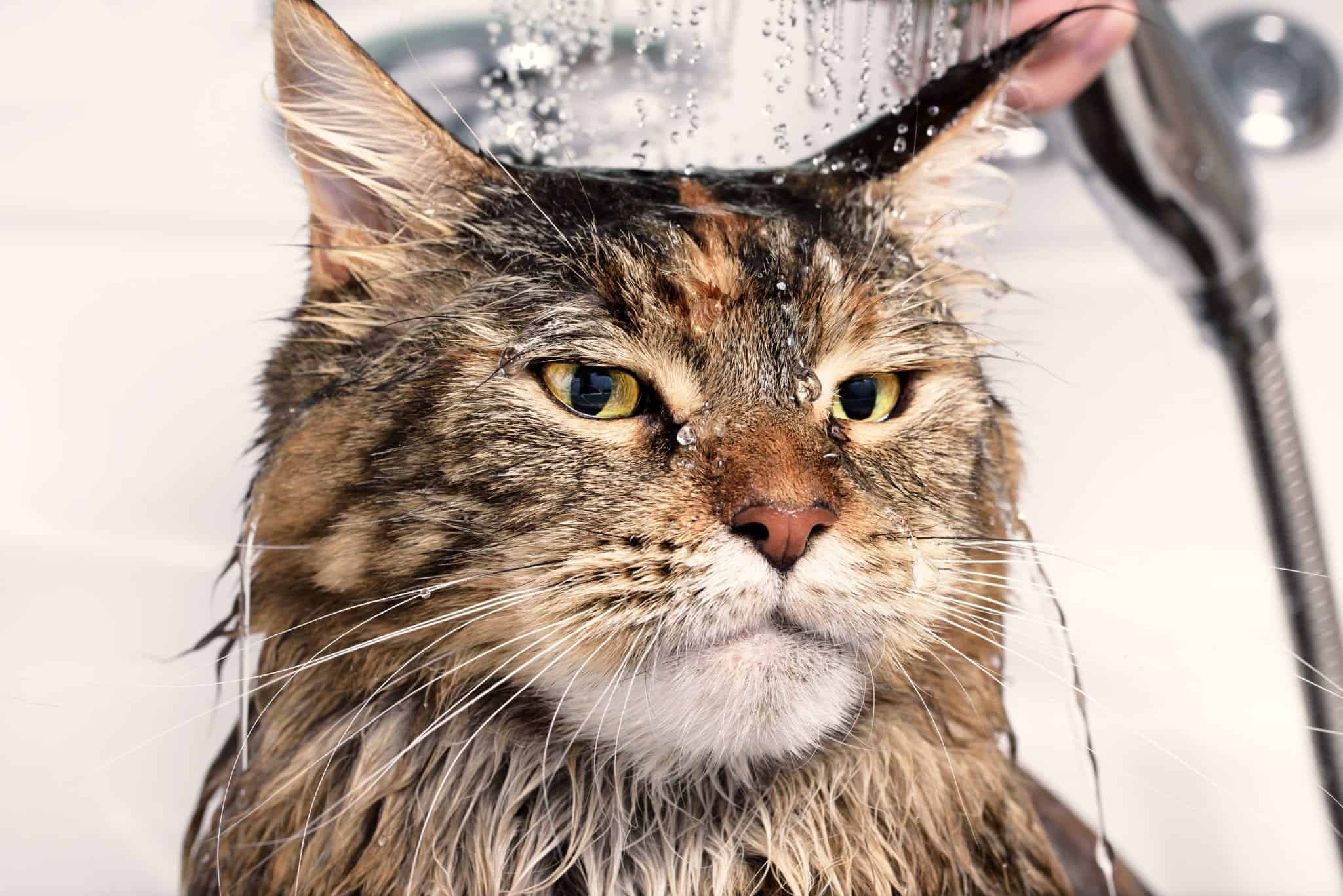 5. Drinking from the faucet is more fun!

Not everything your cat does has a scientific explanation. Sometimes cats do silly things simply because they think it’s fun. Water dripping from a faucet will always be more entertaining than boring water sitting in a bowl. They can play with it, splash it around, and what’s more fun than making a big mess? There are certain cat breeds, like Maine Coons and Bengals, that love playing with water. They’ll happily jump in the shower with you, and why not quench their thirst while they’re in there?

If your cat’s odd drinking habits are driving up your water bill, consider installing a pet fountain or water bubbler. These electric water dishes keep the water moving and adds oxygen at the same time. The water is easier for cats to see, and it tastes better. You always want to make sure that your cat is getting enough water. Dehydration can negatively impact vital body functions and put your pet’s health at risk. But as long as your cat is getting enough water by drinking out of the faucet, there’s nothing to worry about.