Trucker Gifted With “Christmas Miracle” After Being Reunited With Beloved Cat

They say that dogs are a man’s best friend, but such is not always the case. For one trucker named Matthew from Texas, his three-year-old gorgeous gray kitty named Ashes is his best fur friend. The two spend countless hours together traveling cross country in Matthew’s 18-wheeler, enjoying every moment spent and mile covered on the road side by side. That is, until this past July 2019.

Matthew made a quick pit stop at a Love’s Travel Stop, and somehow Ashes accidentally slipped out of the truck and away into the brush surrounding the building. Although Ashes is a pretty calm cat that doesn’t mind traveling cross country or riding in a vehicle, he became startled and was nowhere to be found after Matthew searched high and low for hours.

Sadly, Matthew had to get back on the road, but over the course of his routes, he rearranged them carefully over the next few months so that he could come back to that very same Love’s Travel Stop in Springfield, Ohio to hopefully be reunited with his beloved kitty. 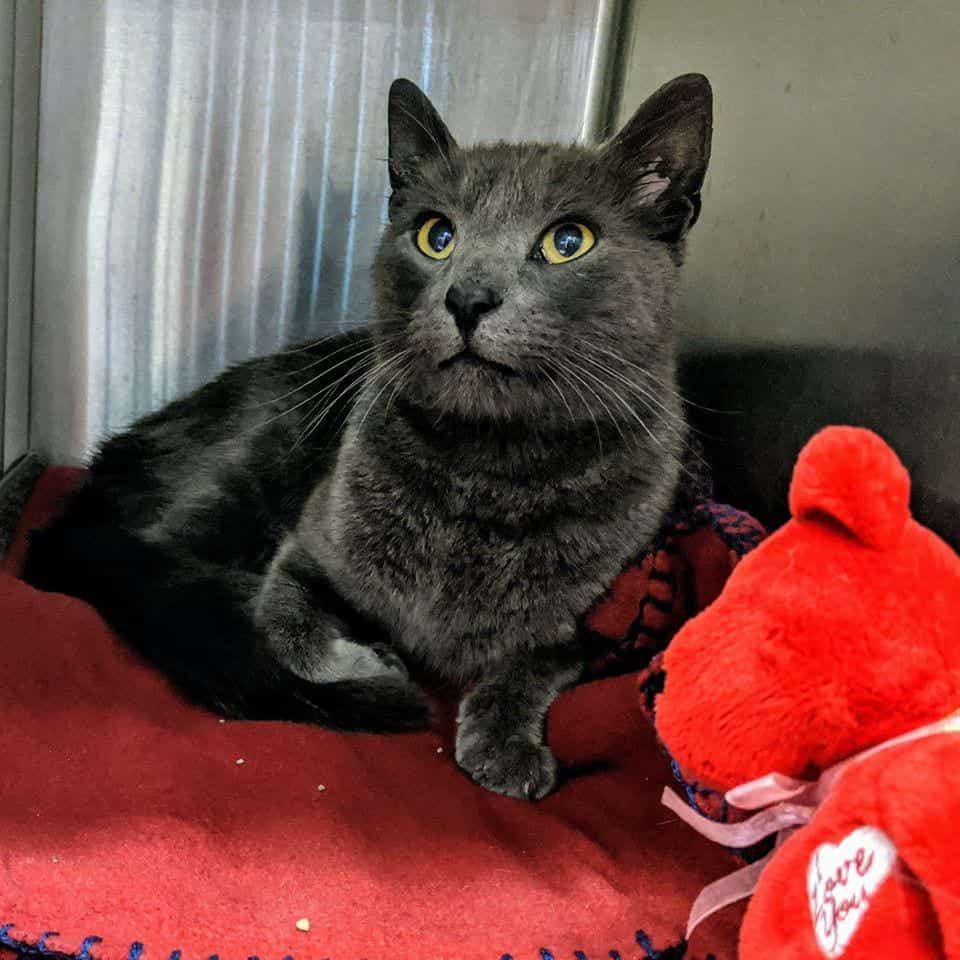 Weeks turned into months, and still nothing. Poor Ashes was nowhere to be seen.

Then, one day in mid November, a woman by the name of Kimberly happened to stop at that exact Love’s location in Springfield. She was making a big move from the West Coast back to the Rochester area with the the help of a good friend. It was bitter cold, with temperatures hitting 13 degree fahrenheit, when Kimberly saw an emaciated gray kitty that was shivering, begging for help from a kind soul: “He was trying to not put his feet down on the ground, it was so cold.”

Kimberly and her friend canvassed the area to search for the cat’s owner or clues as to whose cat this was, and in the meantime they invited the kitty to warm up in their car while wrapping him up in a blanket.

After no one would claim the poor kitty, Kimberly decided to bring the cat she decided to nickname Smokey along with her for the rest of her journey to Rochester, NY. She new that when she arrived, the good people at the Lollypop Farm would help get this cat back on the right track and find him a suitable home should he not have a microchip. 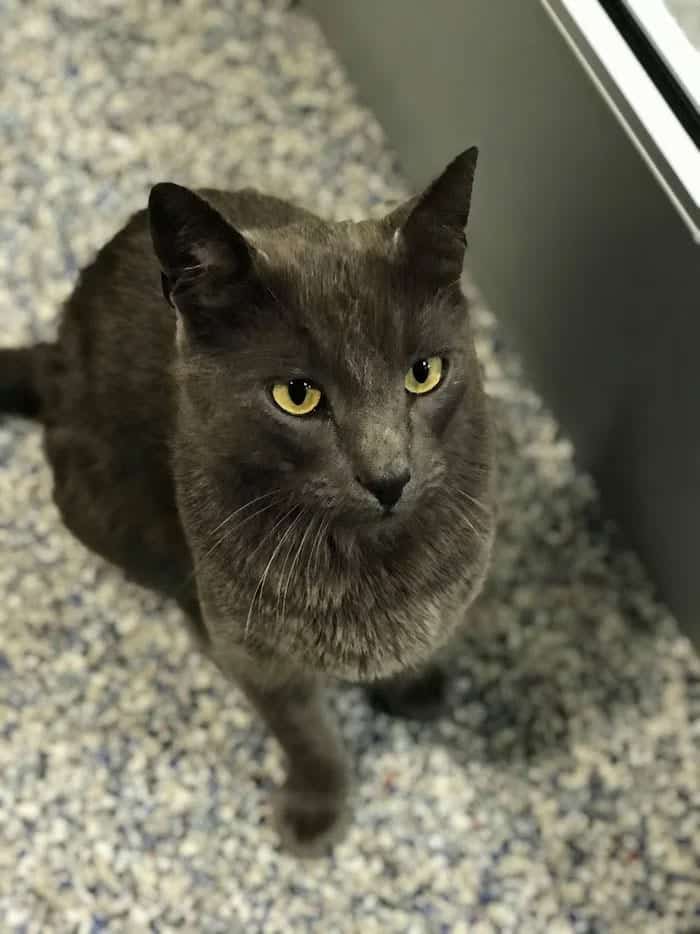 When Ashes arrived in the care of the Lollypop Farm staff, everyone was in for a surprise. Turns out that Ashes, AKA Smokey, did have an owner and a home, but it just so happened to be 1,465 miles away in Texas. Quickly the shelter staff phoned the number attached to the microchip, and they were able to tell his cat dad that he was safe and receiving basic and necessary veterinary care.

Matthew was equally relieved and amazed, and eager to be reunited with the cat he loved dearly: “I had been thinking about Ashes every day.”

Seeing as Matthew’s profession allows for some flexibility, he was able to reroute a few runs that he had to get him to Ashes sooner rather than later. He worked with the Lost and Found Team to arrange his reunion with Ashes roughly ten days later, pulling up to the shelter in his big rig, and as you can see, there were many happy tears shared all around. Ashes pounced happily to his cat dad, and the photos were purely priceless. Once back in his truck with his human, he lept straight in and took back his little designated cat seat. Kimberly and her friend were also there for the reunion, and overjoyed to see Ashes happily returned to his loving owner. 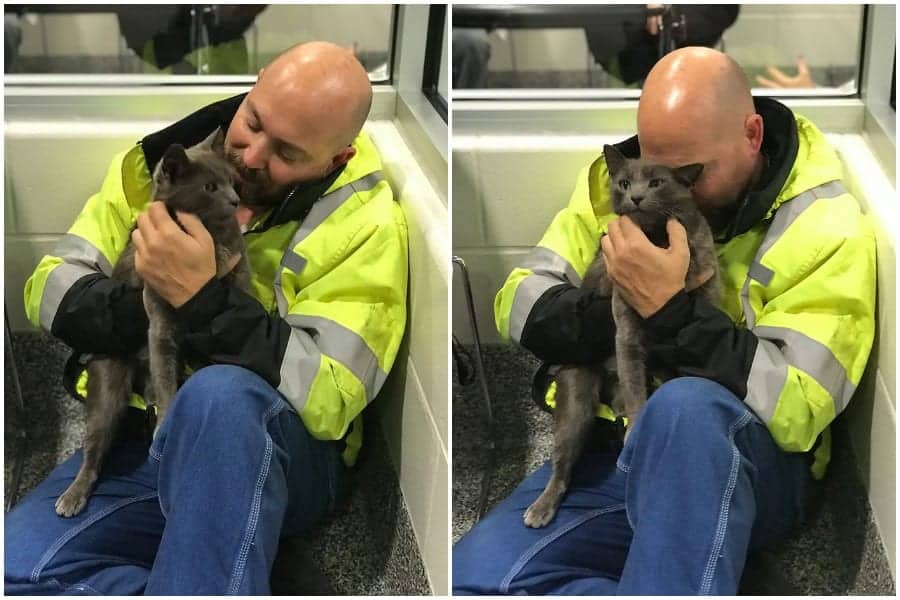 This is a beautiful story that serves of the powerful reminder of the importance of microchipping your pet. Without it, Matthew and Ashes would have never been reunited.

“It’s that microchip – without it, I wouldn’t have ever gotten him back. If you love your pet, you just have to chip them. The women that found him saved his life, but the microchip brought him home.” 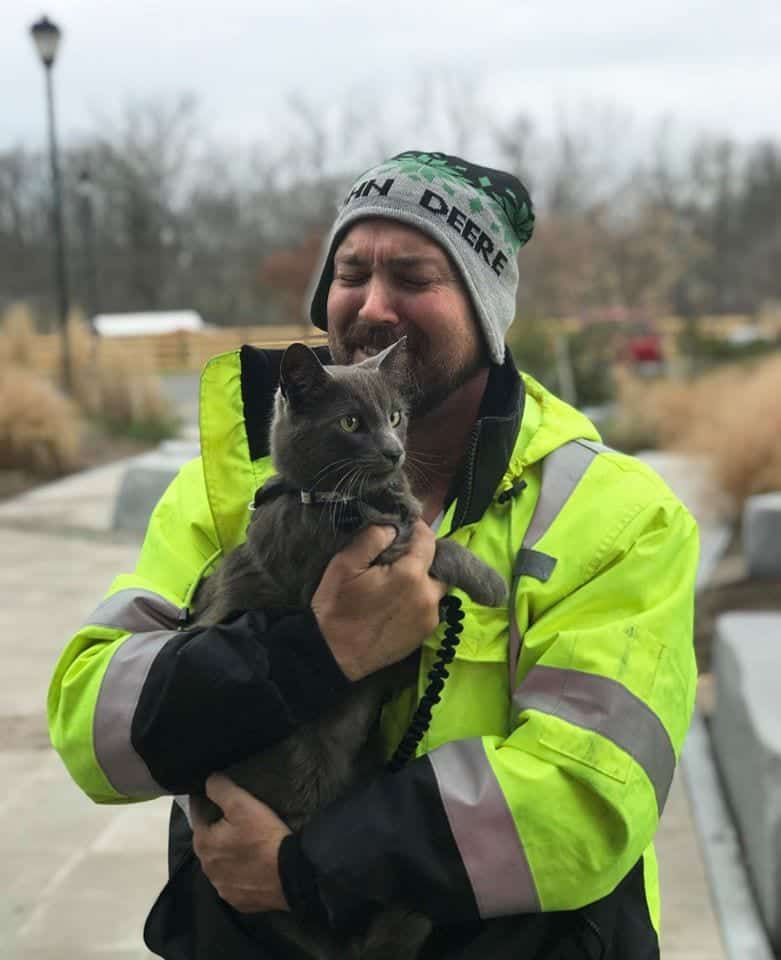 Not all stories have happy endings like the one that Matthew and Ashes shared, so please, if you want to better the chances of finding your pet should they go missing, be proactive and get them microchipped. 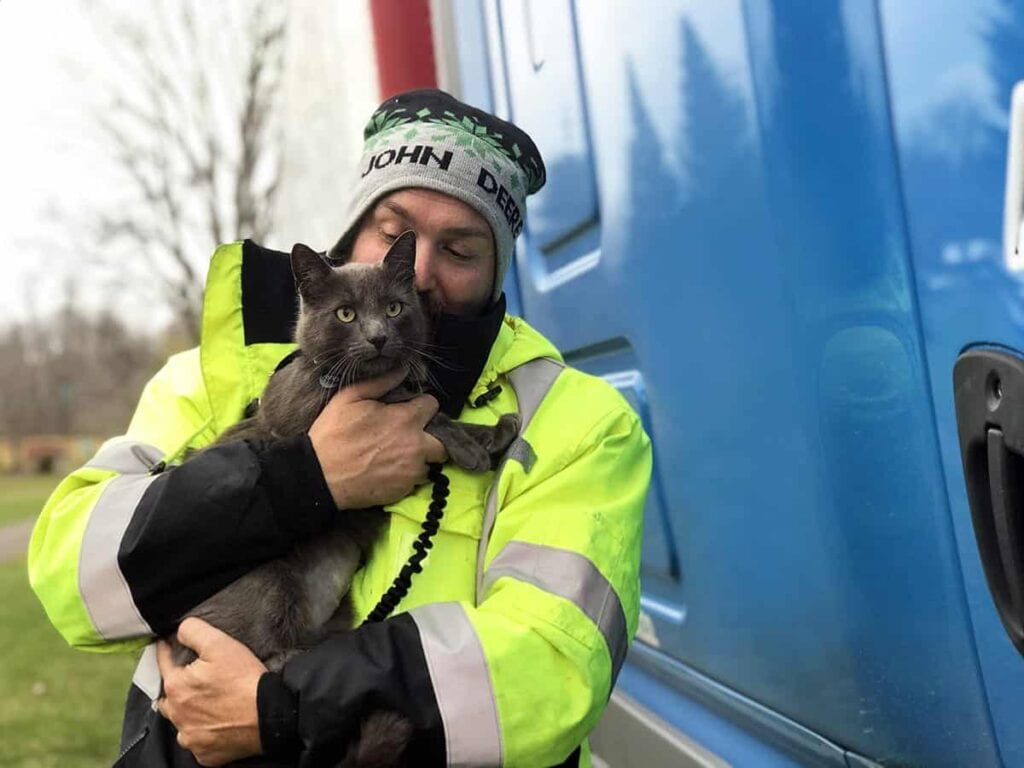 All Images Courtesy of Lollypop Farm, The Humane Society of Greater Rochester

*If you’d like to read the original publication of this story, you can do so here on their website*

Cat Meowing Like A Southern Belle Is Too Cute For Words

These Christmas Cat Memes Are Right Up Your Alley