When it comes to our feline friends, it goes without saying that the safest place for them is strictly indoors. But this isn’t just for our cat’s sake. It’s for the sake of wildlife, too. We know that even though house cats know where their next meal is coming from, they’re still predators at heart. And because of this, they’ll take it upon themselves to bring us their kill as gifts. And, while we try our best to be appreciative of their “gifts” they bestow upon us, it makes us sad to think of this harsh reality.

We often say that cats will be cats, but one study suggests that cats won’t be cats if given a better of quality of food and proper enrichment. 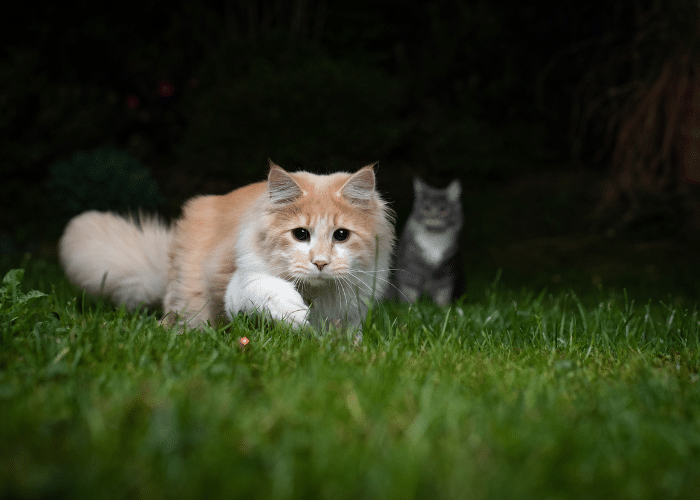 If have a cat in your life that you allow to go outdoors, it’s going to come with consequences for wildlife. Some cats obviously have a higher prey drive than others, but every cat has it in them to be a deadly assassin if the mood strikes. Fitting a collar on a cat with a bell is proven to lessen their natural hunting capabilities when it comes to birds, but collars also come with other consequences. A collar which is not the breakaway type can easily become stuck on a fence and choke your poor kitty cat—which can ultimately be fatal.

Cats killing wildlife is a major issue in Australia. So much so, that many species of indigenous birds are critically threatened. And local authorities have placed many restrictions on cat owners for this very reason.

A recent study has shown that there might be a reason for why cats are killing small animals, though. And while we often think it’s because they’re gifting us with dead animals, or simply showing off, such might not be the case. The truth? Their diet is lacking the nutrients they need to thrive. And to top it off, they’re not getting proper stimulation and committing these feline crimes because they’re bored. 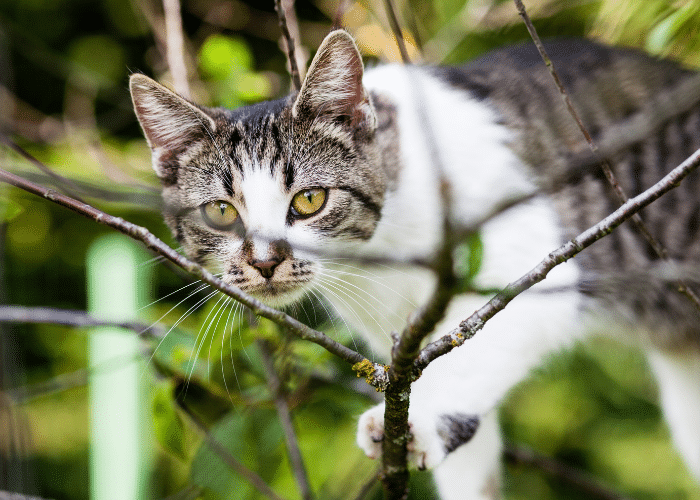 It’s been shown that when cats are provided with a quality cat kibble made from enriched protein and free of fillers, they were up to 36% less likely to slay small mammals.

Additionally, the study out of the UK found that when cat owners engaged more often with their cats, the cats were less likely to exhibit predatory instincts when away from home. So, this just goes to show you the importance of enrichment for our feline friends!

Despite the common misconception that cats require less care than say a dog, a cat still requires several basic necessities to ensure that their needs are being met. Both mental and physical stimulation, quality food, and affection are important to a cat’s well-being. 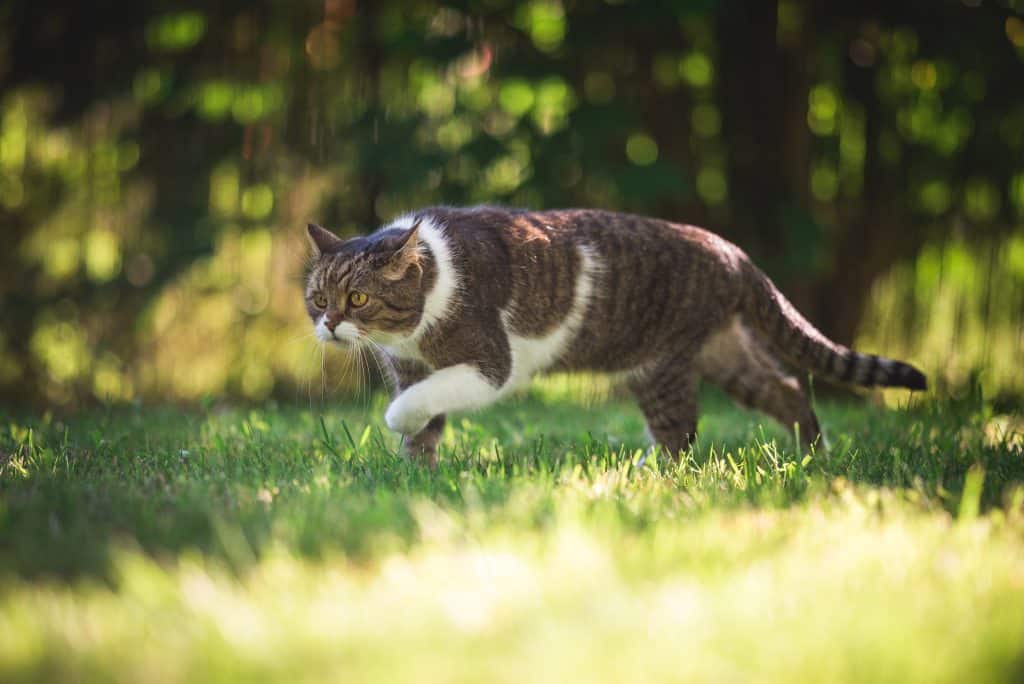 The results from the study showed that,

In a controlled and replicated trial, we tested novel, non-invasive interventions that aim to make positive contributions to cat husbandry, alongside existing devices that impede hunting. Households where a high meat protein, grain-free food was provided, and households where 5–10 min of daily object play was introduced, recorded decreases of 36% and 25%, respectively, in numbers of animals captured and brought home by cats, relative to controls and the pre-treatment period. Introduction of puzzle feeders increased numbers by 33%.

Fitting Birdsbesafe collar covers reduced the numbers of birds captured and brought home by 42% but had no discernible effect on mammals. Cat bells had no discernible effect. Reductions in predation can be made by non-invasive, positive contributions to cat nutrition and behavior that reduce their tendency to hunt, rather than impede their hunting. These measures are likely to find support among cat owners who are concerned about the welfare implications of other interventions. 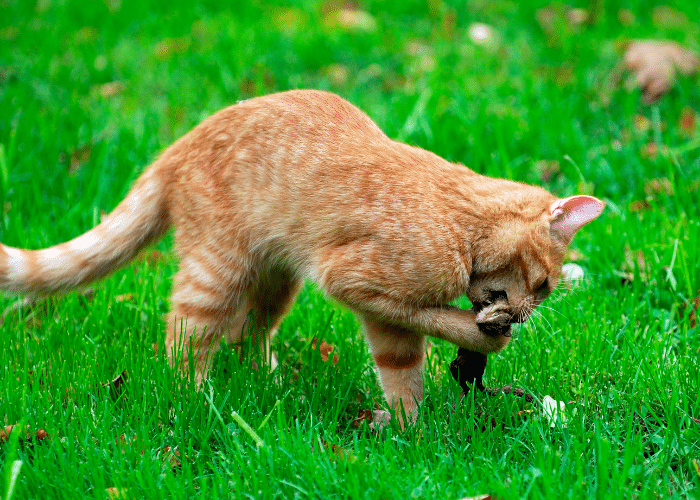 “Making these easy-to-implement changes will be a win-win for birds, cats and cat owners,” says George Bradley of SongBird Survival, a charity that funded the research.

“The study shows that cat owners – like me – can take a few easy steps to really improve the health and happiness of our pets as well as make a really big difference for all our wildlife.”

Whether or not your cat is strictly indoors, it’s always best to offer your cat a food which is high in protein and free from fillers. Unlike dogs which are omnivores, your feline friendly is undoubtedly a carnivore. Such much so, they’re what is known as obligate carnivores. Your cat cannot live on carbohydrates, because their bodies have difficulty breaking it down. Their bodies need protein in order to survive. When choosing a food for your cat, always check the ingredients list. You’ll want to be sure that you’re choosing a quality protein feed which doesn’t contain fillers as their delicate digestive system cannot break these things down.

We know that cats often like the thrill of the hunt, but there are also other reasons why cats might not eat their prey. Find out what they are here on cattitudedaily.com. 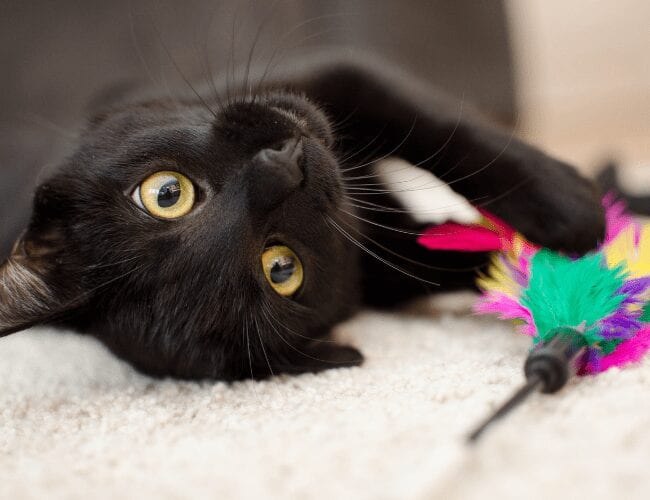 The Best Tips For Traveling With Your Cat

A Collection of Cats With Mustaches To Brighten Your Day