It goes without saying that the cat lovers of the internet have a thing for chonky cats. And another thing that falls high on the list of many cat lovers? Cow cats! Now, when you combine the two of these cat lover favorites, you have yourself a purrfectly irresistable combination. For a cool spotted cat in the UK named Keith the Cat-Cow, not only is he adorable, but he has shown his family that he has a huge heart and nothing but love and kindness to give. Now at nine years of age, Keith’s cat mom said on Instagram that,

“We rescued Keith when he was found on the streets as a very sick and starving 6-month-old cat. He was suffering from cat flu (FHV) and gastrointestinal problems. We were volunteers at the time and decided to bring him home to give him a better chance. He had the biggest character so full of fun and life. My daughter has Autism and Keith became her best friend, her soul mate, they were and still are inseparable. He played with her when she had no friends.”

I caught up with his cat mom hoping to feature his story on the site, and thankfully for me, she agreed. So, everyone get to know this special cat that will melt your heart. 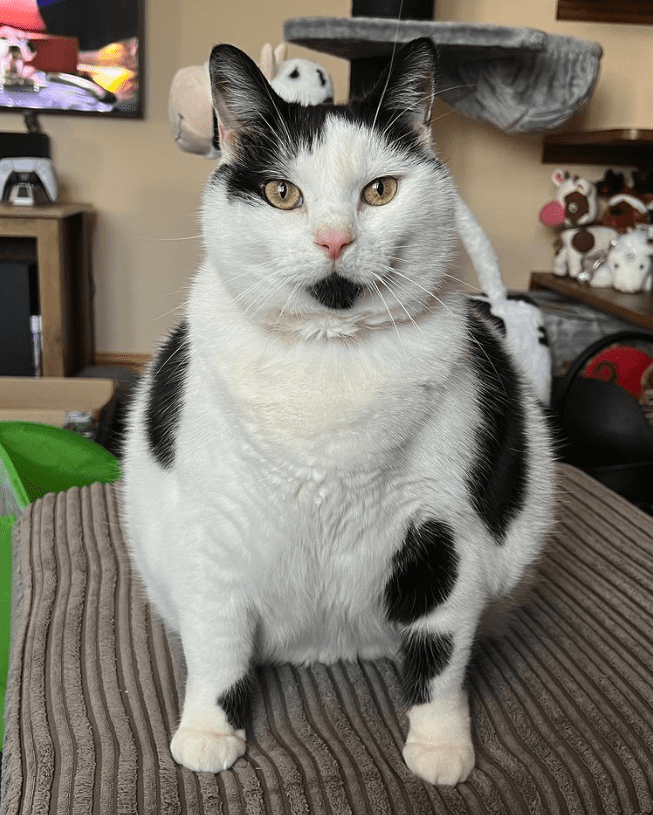 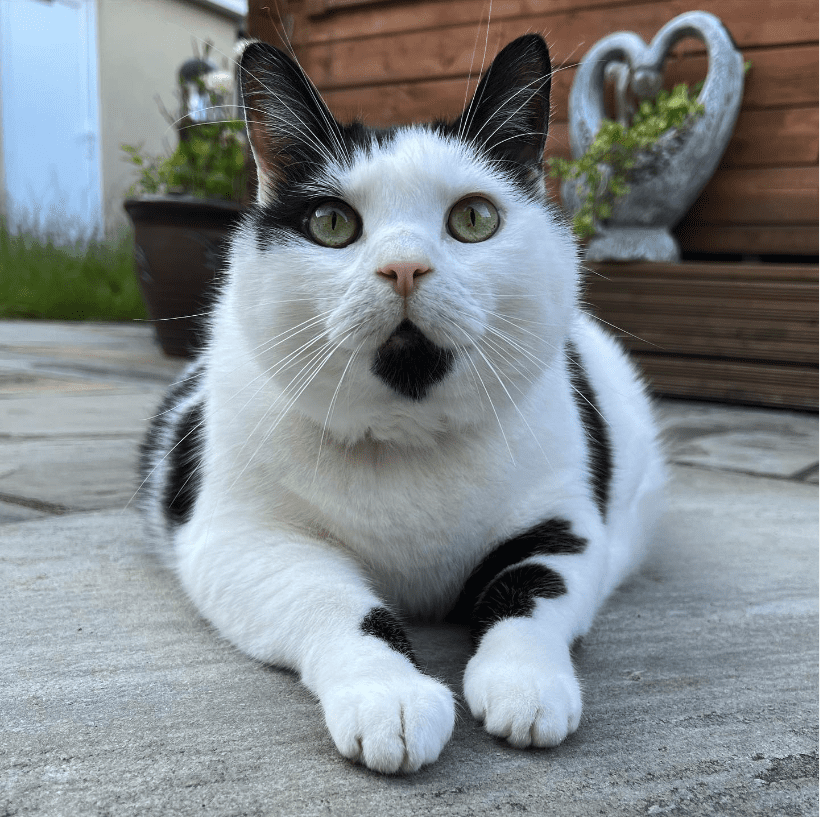 Can you tell me the story of how Keith came into your life?

In 2013, me and my daughter were volunteering at a local cat rescue centre. A young kitten was found on the streets and brought in. He was very sick with cat flu and gastrointestinal problems probably from whatever he was eating on the streets. He had been there for about a month and was not getting better. My daughter is Autistic and she fell in love with this sick cat, he would follow her everywhere and climb on her shoulders whilst she worked. I decided to give him a chance of survival we would bring him home. I didn’t tell my daughter I had him moved to a vet for further testing. It was believed he had FIV and FeLV and I needed to know for my other cats’ safety. It was my daughter Charlie’s 10th birthday the next day and she thought we were taking something to the rescue centre when really we were collecting the 6-month-old kitten from the vets.


How did Keith get his name?

Charlie named this poorly little kitten ‘Spartacus’ because she felt he was a warrior but after a few days we all realised the name didn’t suit him at all. He was a clown, a comedian, and made us laugh so much she decided to name him Keith after the comedian Keith Lemon. 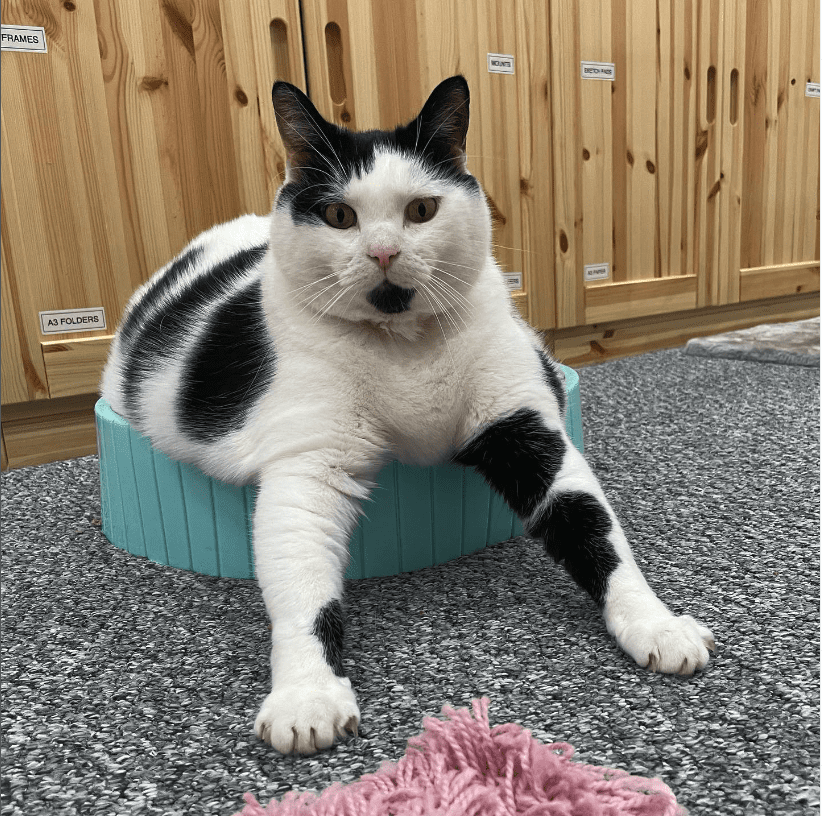 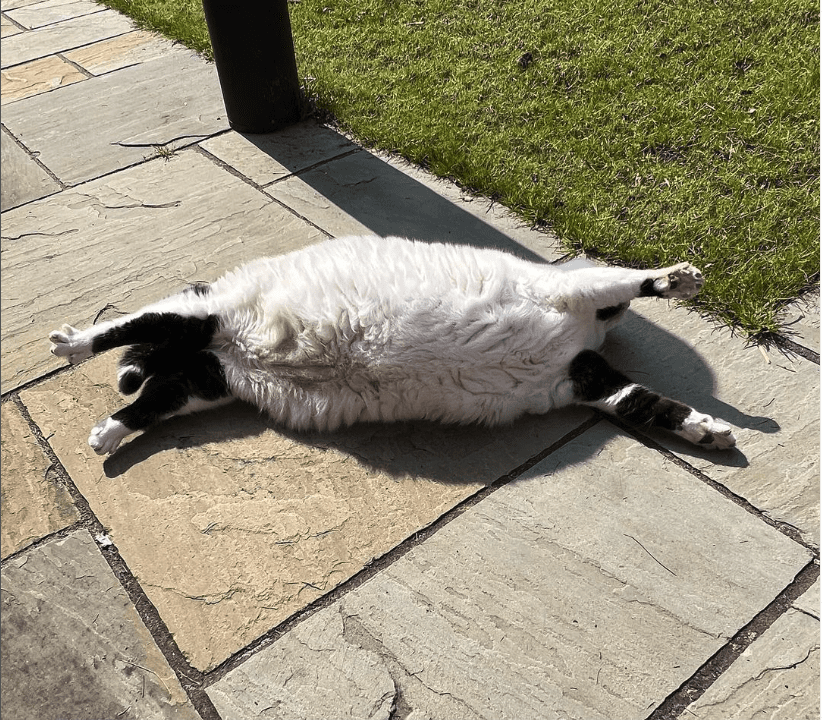 I see that Keith has shed some pounds. Can you tell me about his journey to become less of a chunky cat?

Keith has struggled with his weight his whole life. By the time he was 1 year old, he weighed 5.5kg and was put on a veterinary diet. We realised that unfortunately, he must’ve still felt like he was that starving kitten on the street and he just didn’t stop eating. When u restrict food he gets so stressed he has flu flare-ups and gets very ill. He was a cat that went outside so he would eat from bins and make himself very sick. His weight kept increasing even when he was eating the right amount in a feeder. We moved house and made him an indoor cat to stop him from scavenging and that didn’t help his weight loss. Keith has had every test done under the sun we have spent tens of thousands to try and get to the bottom of his weight gain. He’s a very active hyper cat which is unusual for a cat his size. His own vet believes he has a problem with his pituitary gland but felt that paying £5000 for an MRI and putting him under anesthesia was I risk not worth taking when there would be nothing we could do about it. Our goal with Keith is to prevent weight gain as he is a master thief. We are always having to come up with new ideas to keep food away from him and slow down his eating. 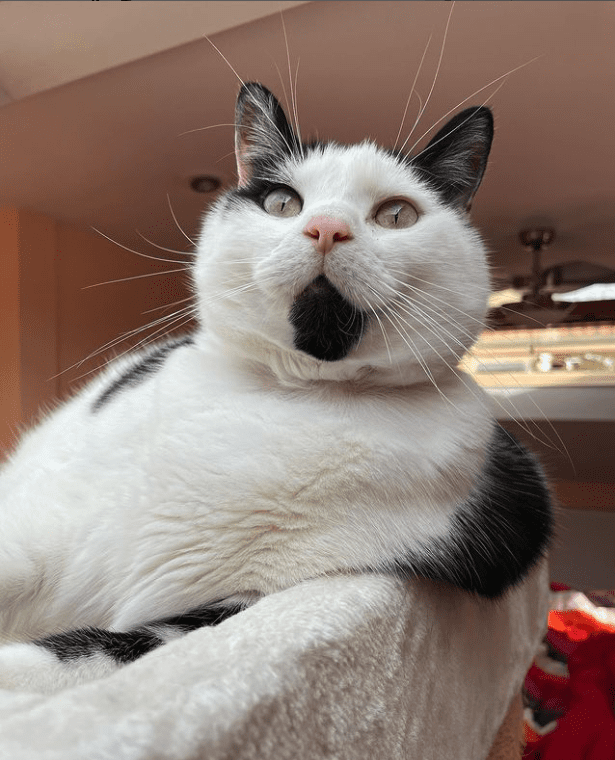 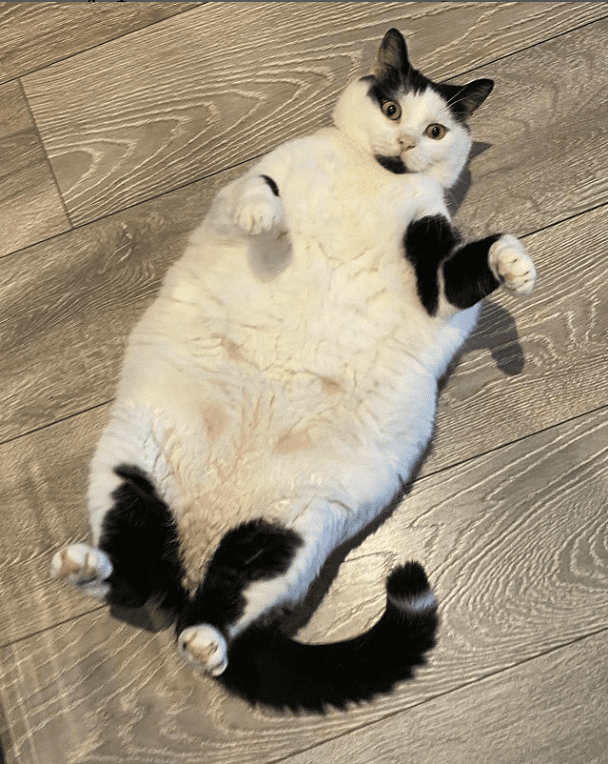 Keith’s personality is just full of fun he makes us laugh so much. He’s super affectionate and has a bond with my daughter who has autism that is just so very special. He’s super cheeky and we are just so lucky to have him in our lives.

From the start, Keith was Charlie’s best friend and he played every game with her. Over the years as she’s grown up those games have changed but his favourite hobbies would be painting and puzzles! 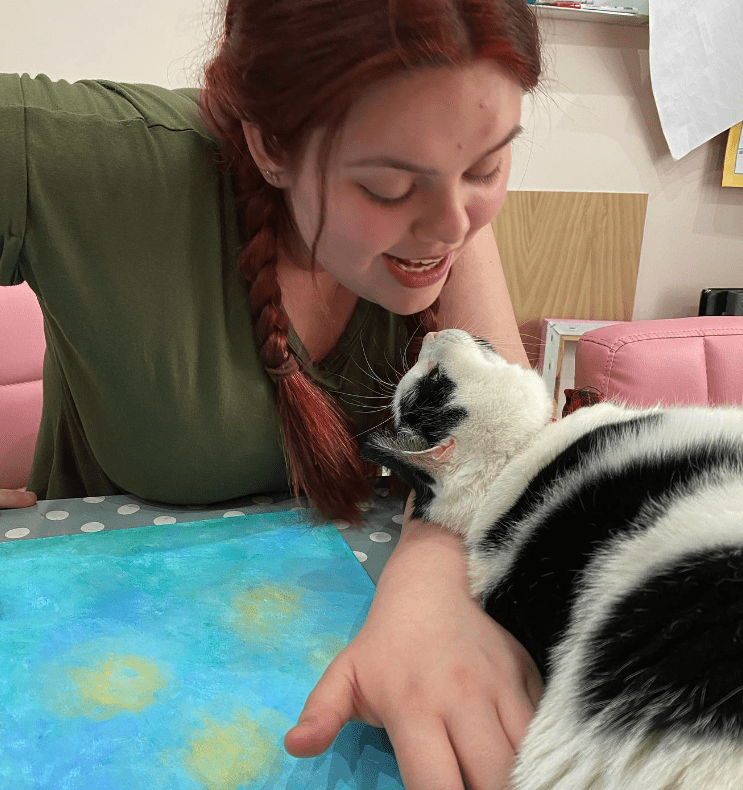 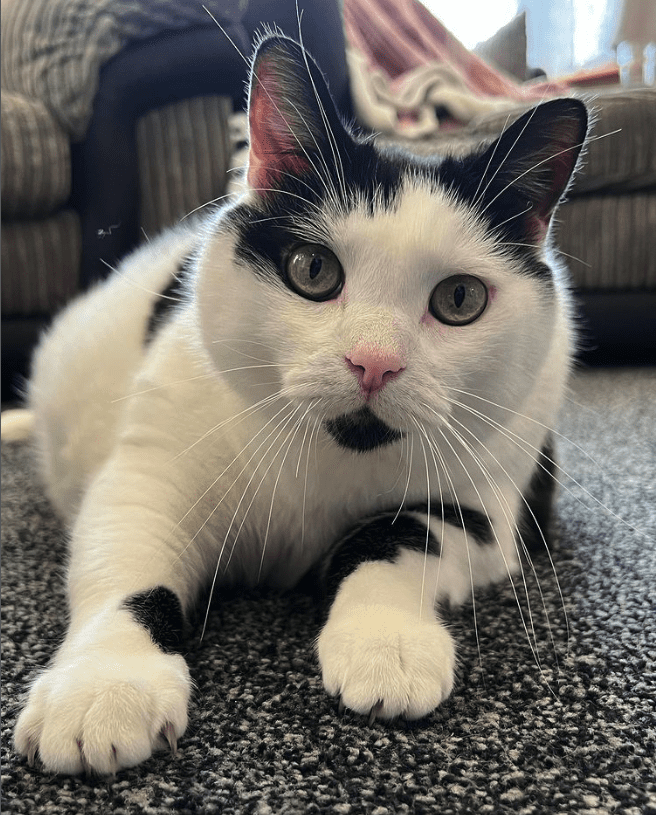 Does he have any cat or dog housemates at home? (I saw that he has cat housemates – I can link to their social profiles as well)

He has three cat sisters Lily who is 12 years old and so sweet and gentle. She has had to have many surgeries over the years and has had both inner ears removed so is completely deaf and had an adorable floppy ear. Storm is a British blue shorthair and she is 7 and a very quirky girl. She literally rules over Keith and he just lets her get away with it! Then finally we have the baby Maggie who is 10 months old and utterly crazy. He’s been so tolerant with her she’s very lucky!

What’s something special you’d like for people to know about Keith?

Keith is not like any cat I have ever had he has this way of knowing he’s needed. He’s supported Charlie through some pretty rough times and literally senses when she’s struggling and comes for a cuddle. You can actually see he looks worried. 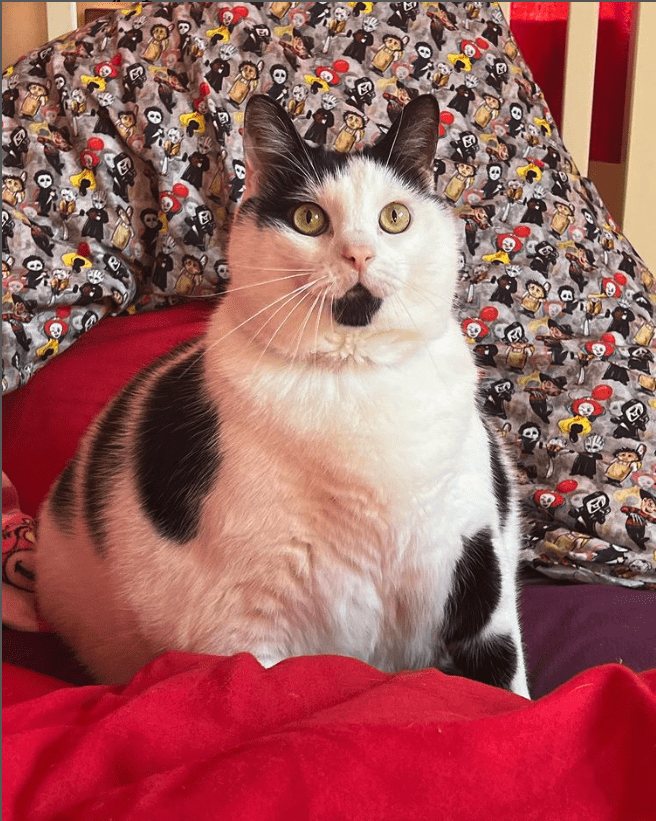 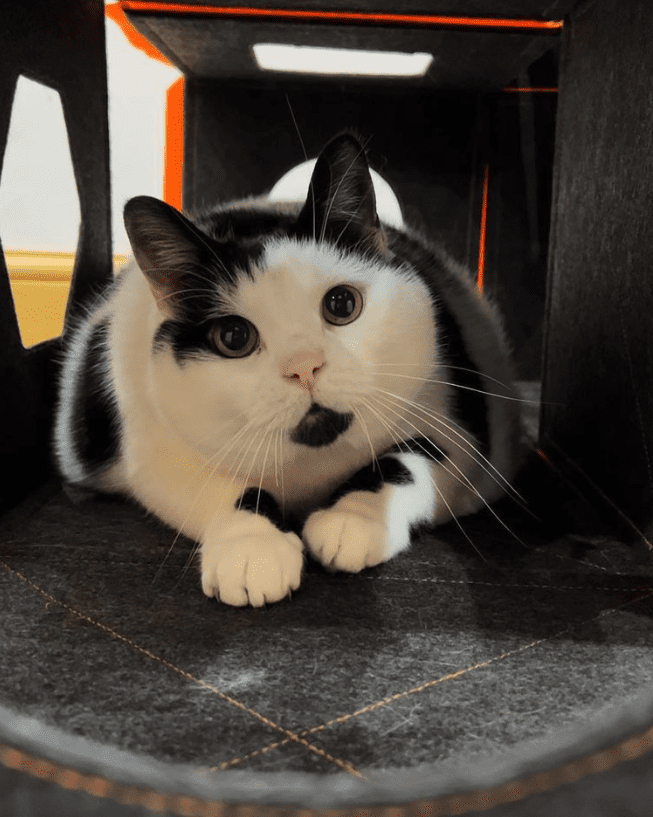 I’d like to give a special “thank you” to Keith the Cat-Cow’s cat mom, Sara, for allowing me to share his story and images with all of the Cattitude Daily readers. For more of this super cool spotted cat, be sure to check him out here on Instagram.


All Images Courtesy of Keith the Cat-Cow on Instagram