That’s right, Juno is a cat burglar! But, if you ask me, she’s the most purrfect kind. 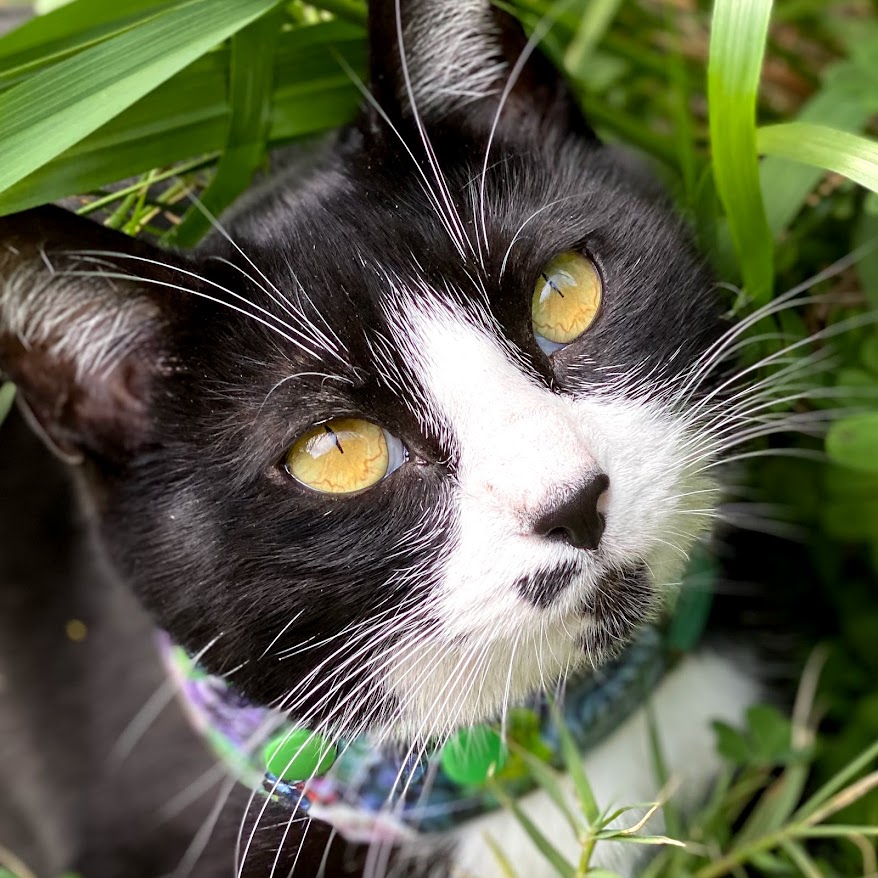 Keep reading to learn the story of Juno—AKA Juno the Klepto Cat!

Meet Juno “the Klepto Kat,” a domestic short hair, black  and white tuxedo girl. Discovered and fostered in West Los Angeles, CA, from a feral litter of five, she found her fur-ever home in 2015 at the residence in the Geston’s in Carpinteria CA. Born in early May, Cinco De Mayo, 5/5/15 was chosen as her birthday. First named Indiana (Jones) by her foster parents for her adventurous ways and curiosity, and renamed to Juno because they got her in June, she was small and feisty. But her adventurous ways didn’t just disappear simply because of a name change. She went from Juno, “the Small Cat” to Juno, The Klepto Kat. 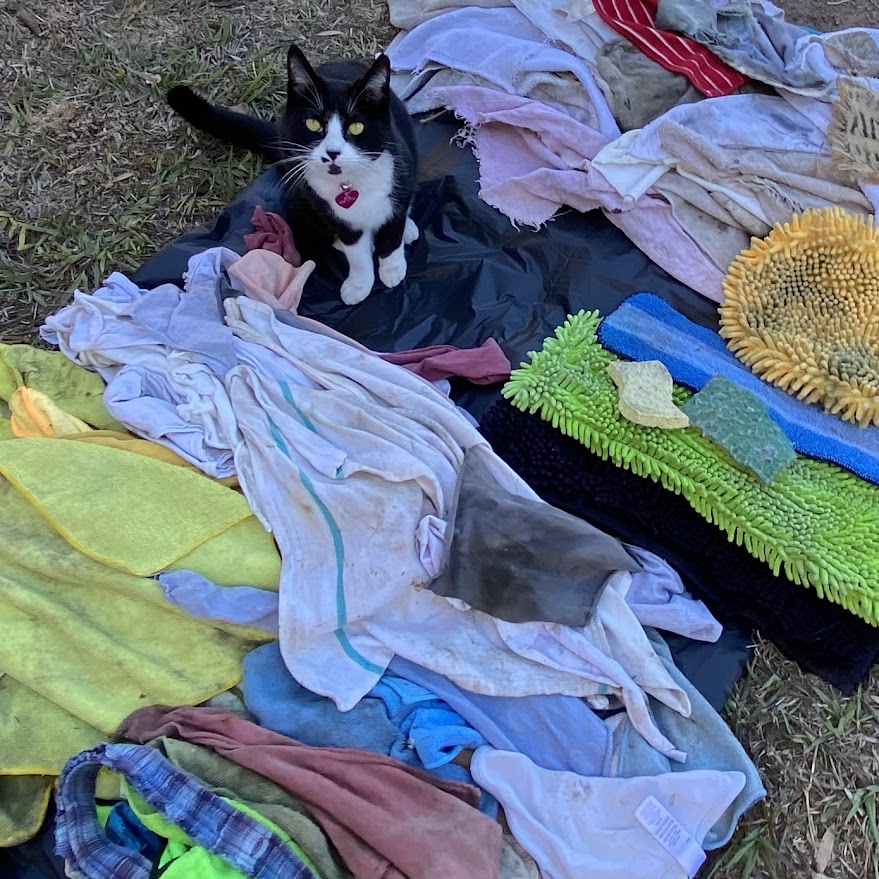 Juno was not your typical sweet loving kitty. Taken early from her orphaned litter mates, at about 5-weeks, she had to learn new social skills and adjust to the human life. Keeping her as an inside pet was quite challenging, she attacked, scratched & would bite anything that was within her site.

Eventually, she was allowed to go out on small outdoor adventures, supervised by family. They notice that her kitty attacks begin to decrease as she starts to become more calm. Her outside time increased, and by six months she had transformed into a more loving, less wild, sweet kitty.

Over the years, she became more independent. She learned that the outside world was hers for the taking, so she set her own schedule going out early mornings to cruise the neighborhood. Like clockwork, she comes home at both breakfast and dinner time. She sleeps a lot during the day whether outside or inside, and is usually home at dark and grabs herself a bedtime snack before settling in for the night. 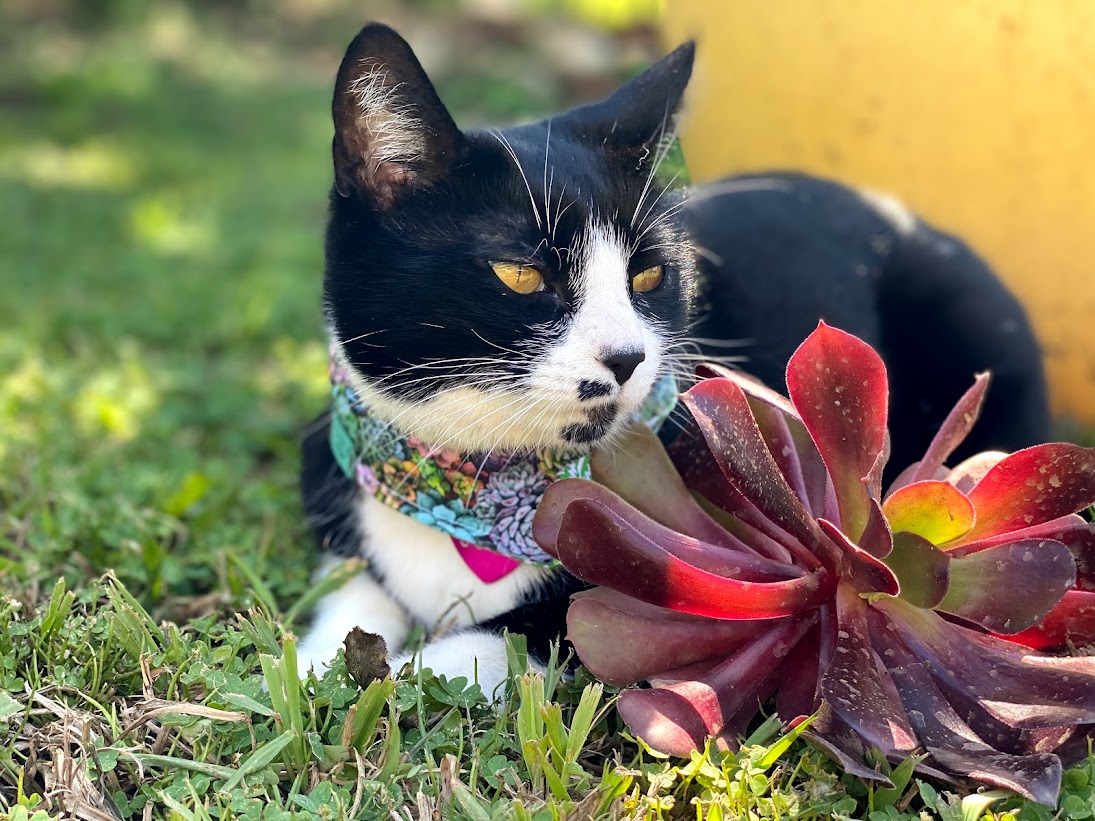 Fast forward a few years, the family started noticing rubber gloves, rags, toys and balls showing up in the backyard, thinking that the neighbors’ kids may have thrown them over. In June of 2019 (approximately 4 years to the day she was adopted), they shared their first social media post of her collecting habits.

Little did they know, it was the beginning of her kleptomania adventures. At the time, they had only really noticed a few things which quickly went from 10 in June to 60 in October, and by the end of 2019 she had collected over 132 items!

She enjoys cruising the neighborhood in the early mornings—especially on Thursdays (trash days)—scouting around for loose trash and treasures to bring home and add to her collection. Spring through early fall tends to be her most productive months, and she has proclaimed spring as her “Official Klepto Season.”

In September 2019 she caught the eye of a local news anchor for KEYT, an ABC affiliate; who contacted the family and asked to run a story on her. 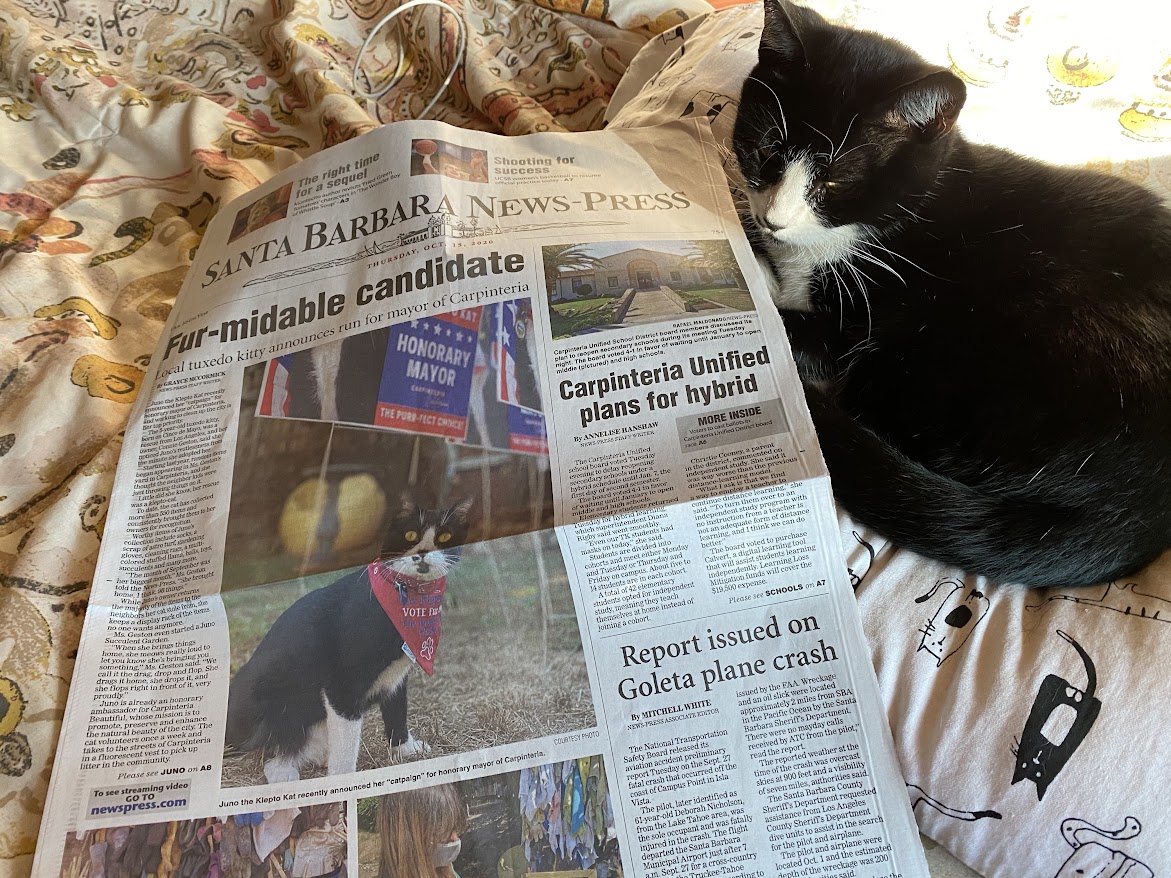 One month later, The Santa Barbara Independent did feature a story on her ; a follow up story ran in January of 2020, and again in August of 2020. Two months later in October 2020 , she made the front page of Santa Barbara New Press, making her one of the most popular candidate’s stories running for office!

In August 2020, they began to capture on video her daily routine, in the early morning before 8am and early evening she would “drag, drop, and flop” things she had found. The “drag, drop, and flop” became a regular observation, with her loud meows, announcing she had something to share. She would carry or drag things home, drop them, and then flop next to them with pride. So, it became a “Drag, Drop and Flop”  Youtube playlist.  She is a very loved cat from her home and the community and will continue on her daily adventures sharing her love with whatever she brings home!

When the pandemic hit, she began bringing home used plastic gloves, face masks, sani-wipes along with her other findings gaining community admiration and respect for “cleaning up the hood”.

It seemed to bring a smile to everyone during the ‘Stay Safe, Stay Home” times. Friends and neighbors would joke about how she kept cleaning up the hood and that ‘we could use someone like this in politics. Late summer 2020, they decided to support Juno in a run in Paw-li-tics as honorary mayor and a smile campaign in their coastal town. With all the stuff that’s been going on in the whole community and having to stay in, they thought it would be fun to throw her paws in the political ring, though she couldn’t legally run because she’s not 18 (36 in human years), she’s not a registered voter, and she’s a cat!

However, this didn’t stop the determined klepto-cat from doing her civic duty as a Carpinteria resident. 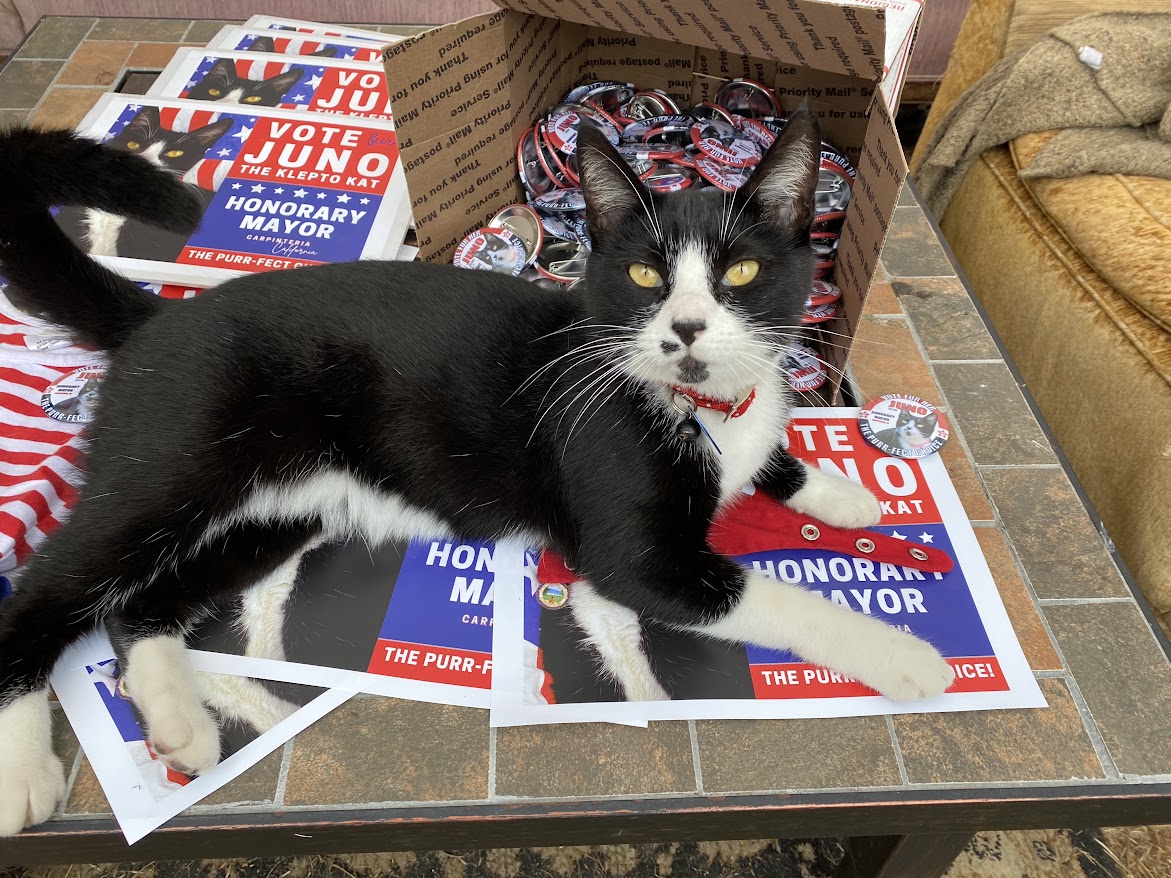 Juno got a red cat campaign stroller and they would hit the streets giving out “VOTE FUR HER – The Purrfect Choice” buttons, window posters, and yard signs. Juno ran to clean up the community using sanitation, recycling & litter (no pun intended) control as her cat campaign especially with all the gloves, masks, and disinfectant wipes being left all over the city.

She had proposed that once things get back to normal she would like to work towards organizing and leading Klepto Klean -Up Krew in her community. While her name didn’t make it onto the ballot on Election Day, Juno the Klepto Kat hopes to continue to raise awareness for cleaning up Carpinteria and the environment as a whole. 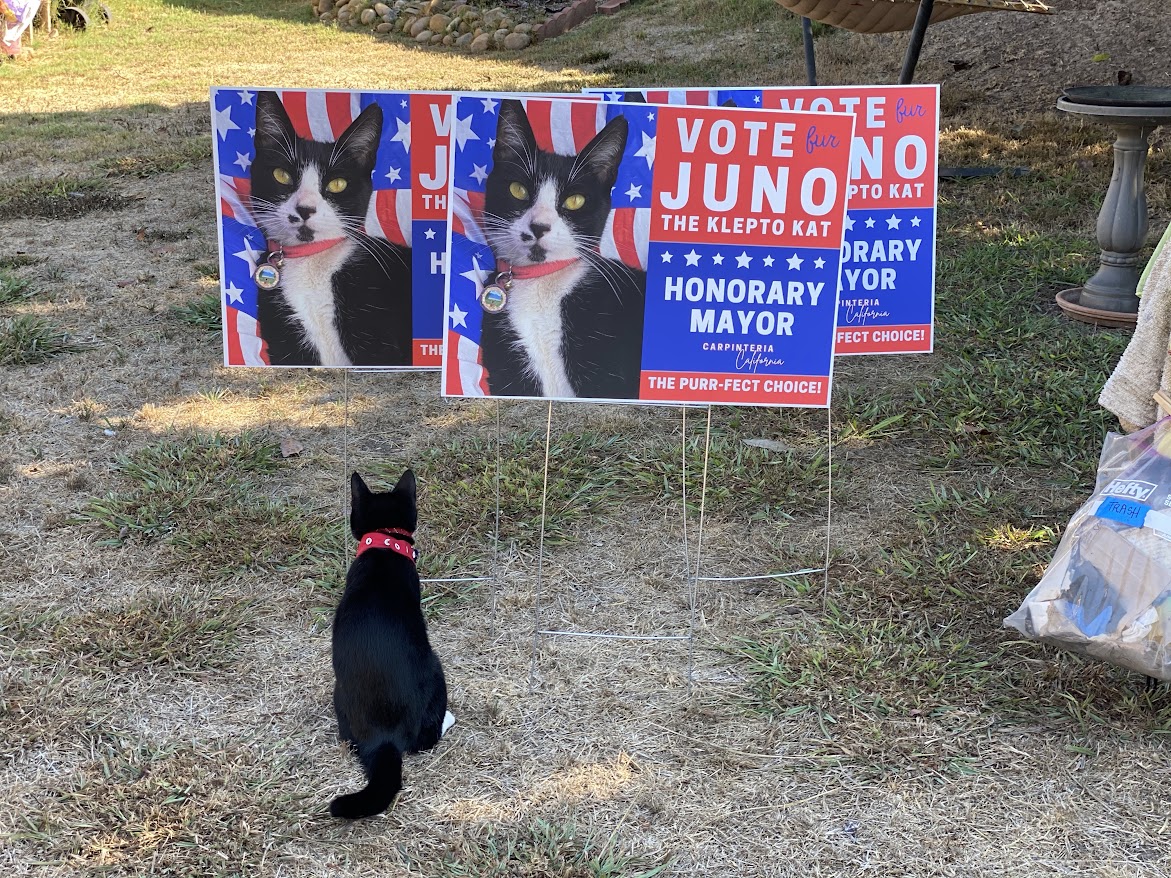 Currently, Juno has managed to gather a collection from gloves to rags to trash and some very random finds, including: 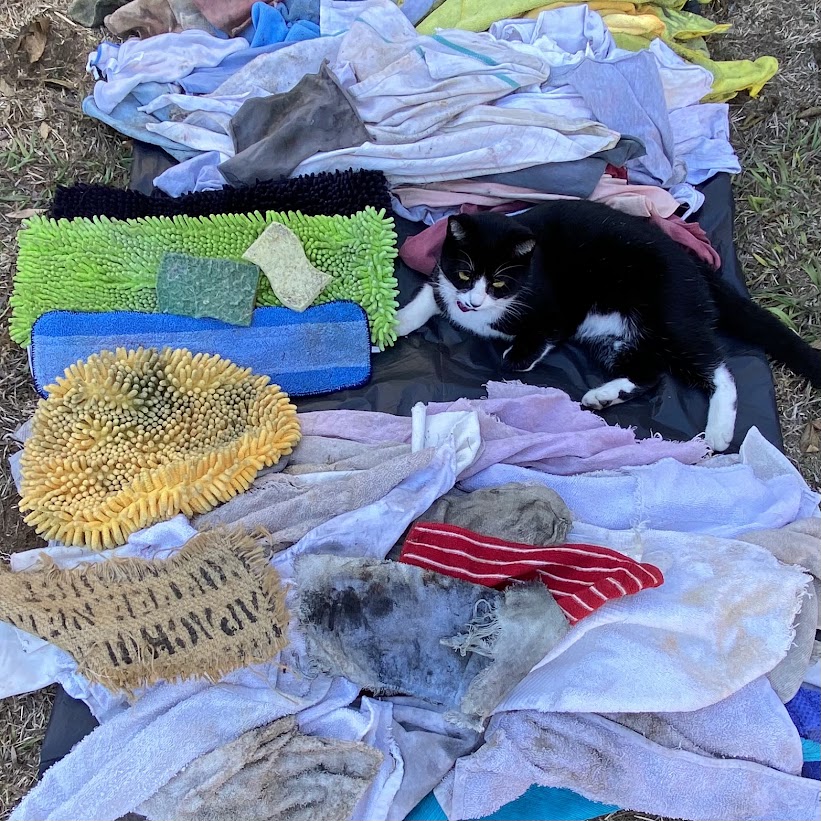 I’d like to give a special “thank you” to Juno’s cat mom, Connie Geston, for allowing me to share her cat’s story with all of the Cattitude Daily readers. If you know someone who would get a kick out of this klepto cat, don’t forget to share.

All Images Courtesy of Connie Geston / Juno the Klepto Cat

Why Does My Cat Bite Me To Get My Attention?

Let Paint My Pooch Transform Your Cat Into...

Meet Tomitilii: A Sassy Tortie From Romania With...