For a lovely ginger tabby named Mellie, he’s always ready for Halloween. And it’s not just because he has an eye-catching orange coat, but because he’s got some of the coolest cat vampire teeth you’ve ever seen. He is unique in that his vampire teeth are on the bottom instead of the top like most cats with long fangs, so it makes him look extra cool.

For Mellie, he was once a homeless kitty cat with no place to call home. Sick and on the streets, he needed someone to take a chance on him and to help him shine. Thankfully, fate was on precious Mellie’s side, because he encountered the purrfect forever human to nurse him back to health and give all the love he could ever want. 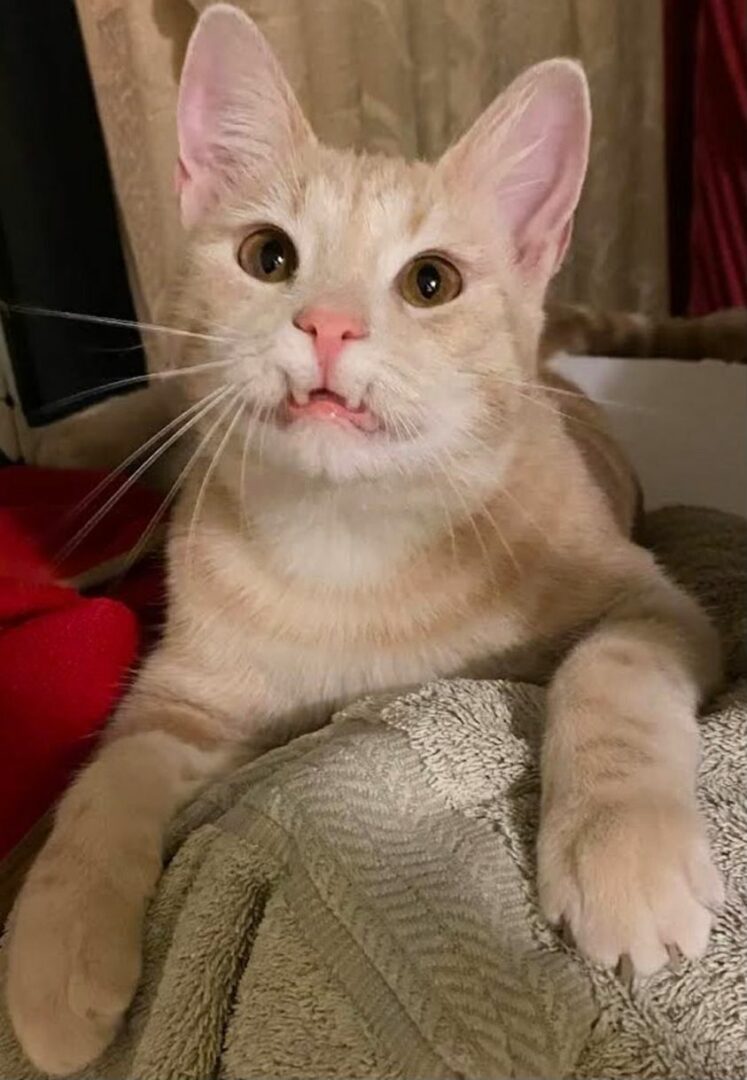 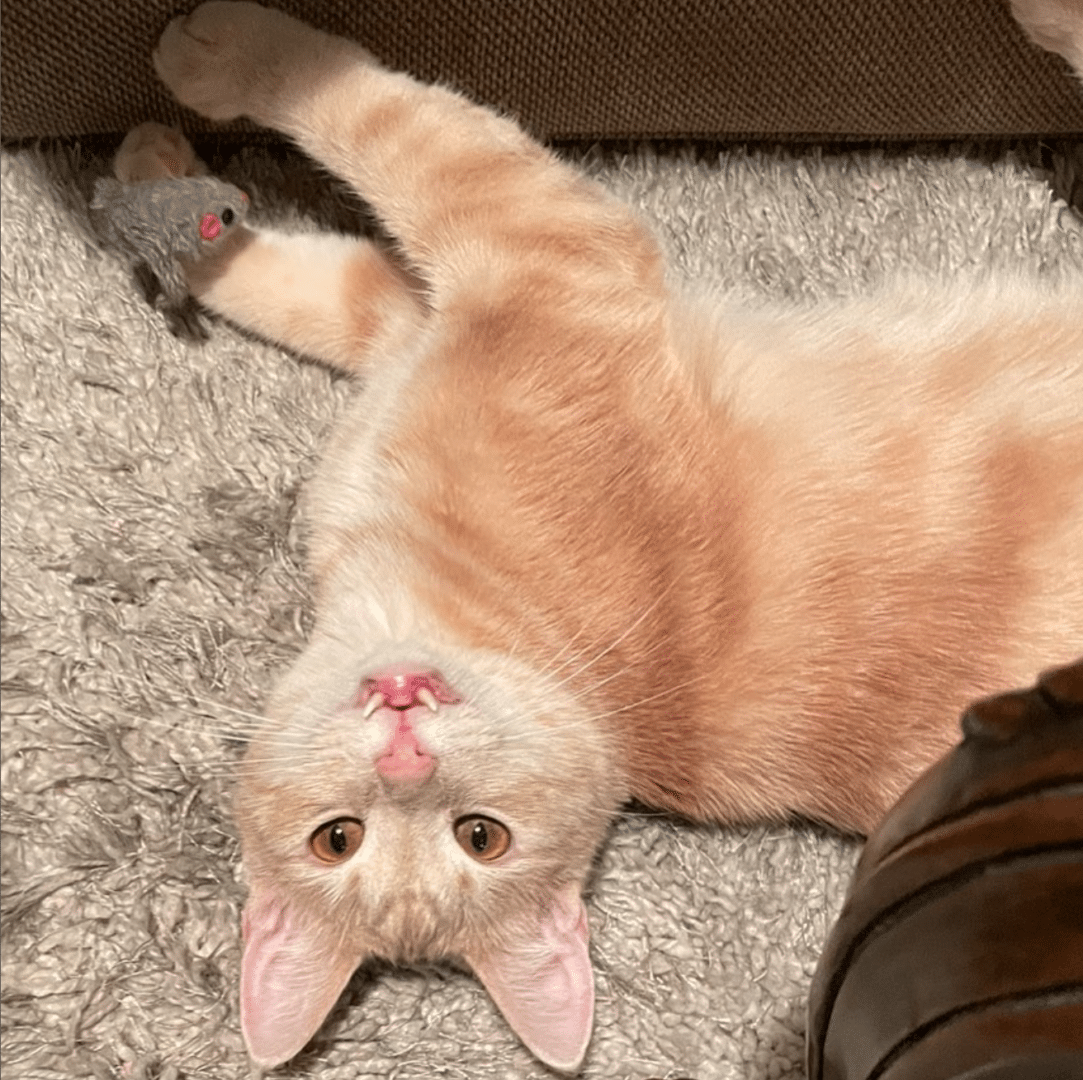 How did Mellie come into your life?

I’m a cat rescuer. My cat rescue Instagram is @thetnrgirl. As the name suggests, I TNR (trap-neuter-return) feral cats. However, TNR involves more than just trapping, spaying/neutering, and returning feral cats to their respective colonies. It also involves rescuing friendly cats and kitties out of those colonies. Mellie was one of the friendly cats that I rescued. He came from a colony in Sylmar, CA (Los Angeles County). He immediately let me know, and quite loudly, that he was not a feral cat. So, I fostered him, nursed him back to health, and now I co-parent/co-own him with my cousin.

How did Mellie get his name?

When I rescued Mellie, I had just finished my Winter Quarter at UCLA, one of the classes I took had a lot of Transcendentalist writers. So, I named him Melville but we call him Mellie. Another friendly cat I rescued from that same colony I named Hawthorne. I usually go with a theme. 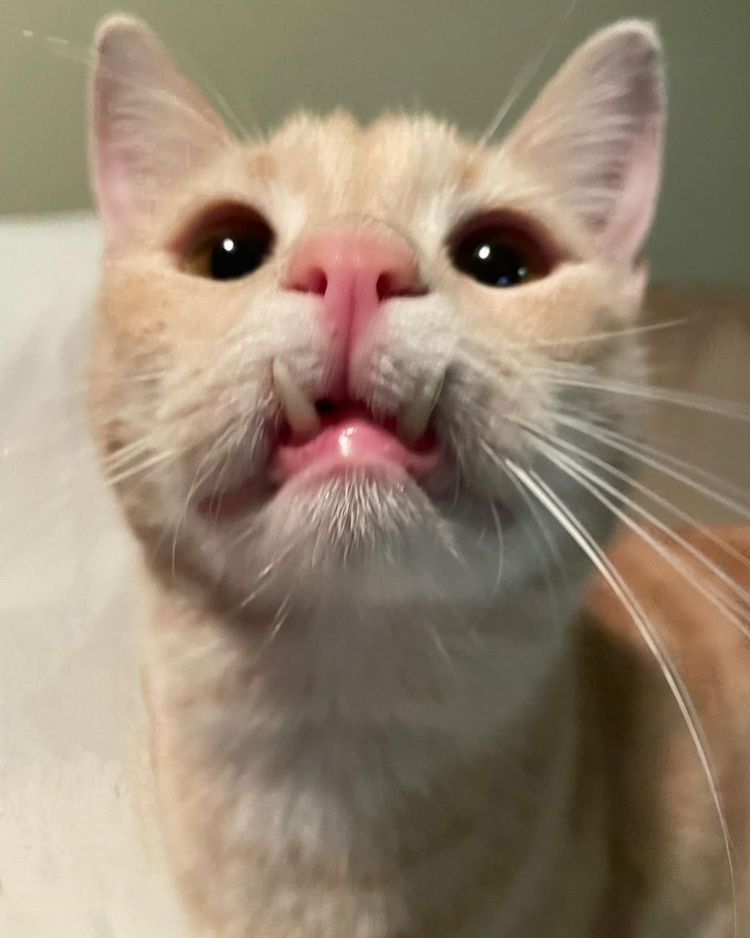 Mellie is the sweetest cat I have ever met, and I’ve met a lot of cats. He is warm and friendly. He gives off a warm, light, and welcoming vibe. He wants to be everyone’s friend. He loves people and LOVES cats and kitties. He is the best foster cat dad. He welcomes all foster cats and kitties with open arms. He is also playful and can be a goofball. He is pure love and a true joy to have around.

Yes! He has two cat companions. Coco, a cat I rescued from a colony in Northridge. He is an orange tripod cat. And Maxie, a cat that was rescued from a carwash when he was a kitten. He is big and fluffy. 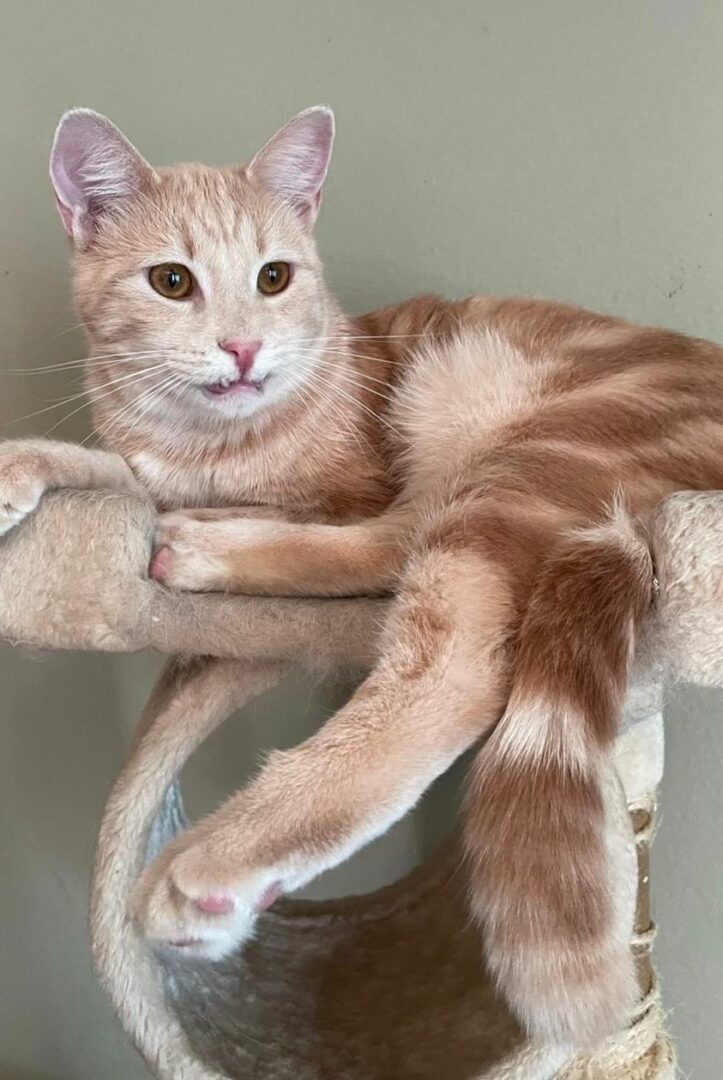 Do his teeth cause him any pain/issues?

No, not at all. When I first rescued Mellie he had severe stomatitis. Feline stomatitis is an autoimmune disorder that causes severe and chronic inflammation of the gums and soft tissues of the mouth. It is an extremely painful condition. It also leads to tooth loss. The vet prescribed antibiotics and anti-inflammatories to help clear the infection before proceeding with dental surgery. The dental surgeon removed all of his remaining teeth (he had some missing already). However, he left his two bottom canines. He said that those two teeth were strong, healthy, and deeply rooted.

If he attempted to remove them, he risked breaking Mellie’s jaw – a risk that neither I nor the dental surgeon was willing to take. So, the two teeth were left in. There was an adaptation period for Mellie. Initially, the teeth did irritate his upper lip. But he adapted quickly. His mouth healed beautifully and his teeth stopped irritating his upper lip. Currently, they don’t affect him at all. He eats perfectly fine and is free from pain, which is the most important thing. 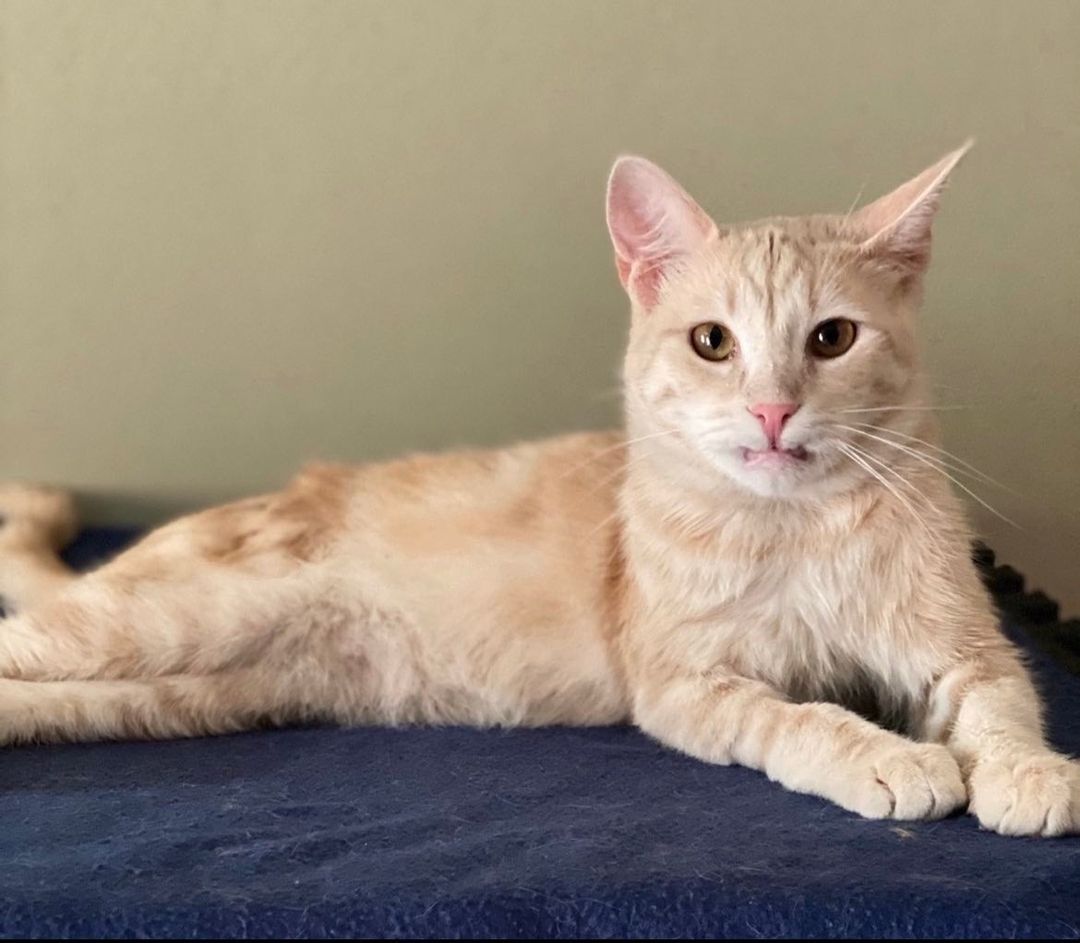 Mellie loves being with people and cats. His favorite activity is definitely cuddling. He also likes to play and really likes to watch t.v. But his favorite would be to snuggle up with his humans.

What’s something special you’d like people to know about Mellie?

Mellie is such a special soul.

He represents so much and can bring much-needed awareness to many important cat rescue topics. As a cat that was rescued from a colony in Sylmar, CA, he brings awareness to the importance of caring for community cats, TNR, spaying/neutering your pets, and cat rescue in general.

As a cat that had extensive medical treatment and a long recovery period, he brings awareness to the huge difference fostering makes in rescued cats’ lives.

As a total love, he highlights the amazing resilience of cats. He has survived so much, yet he trusts and loves unconditionally. 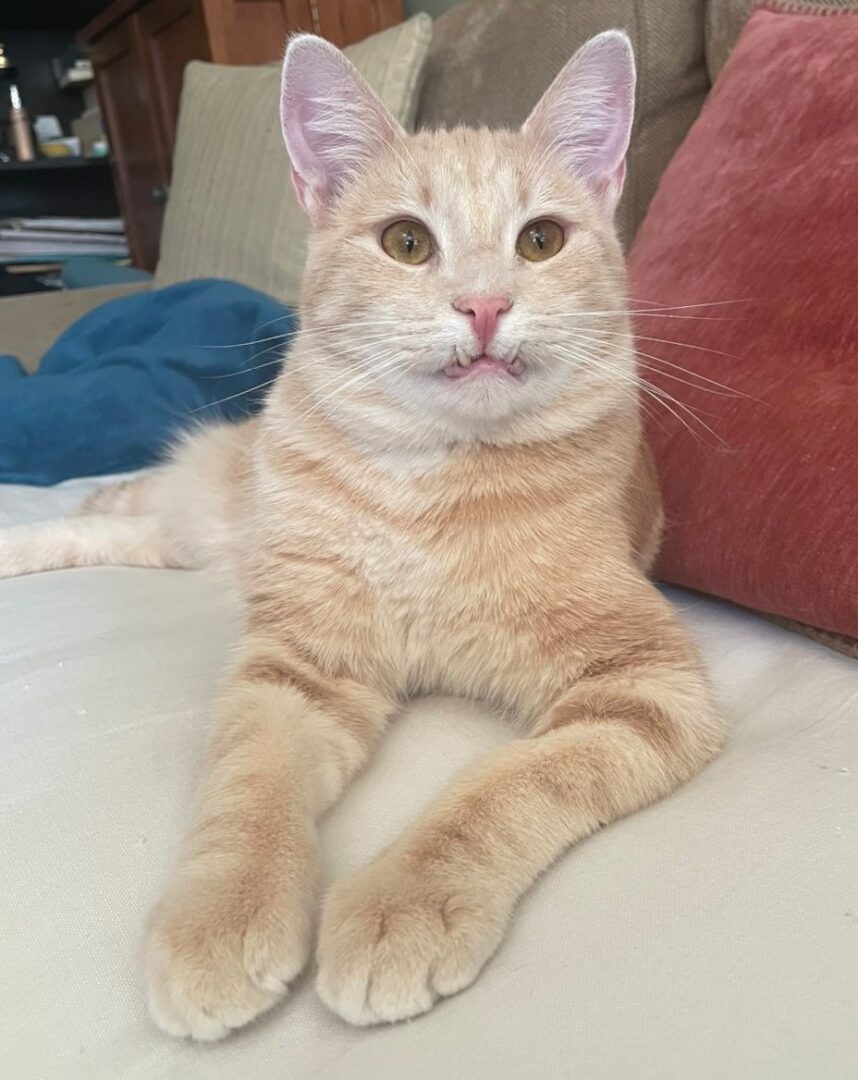 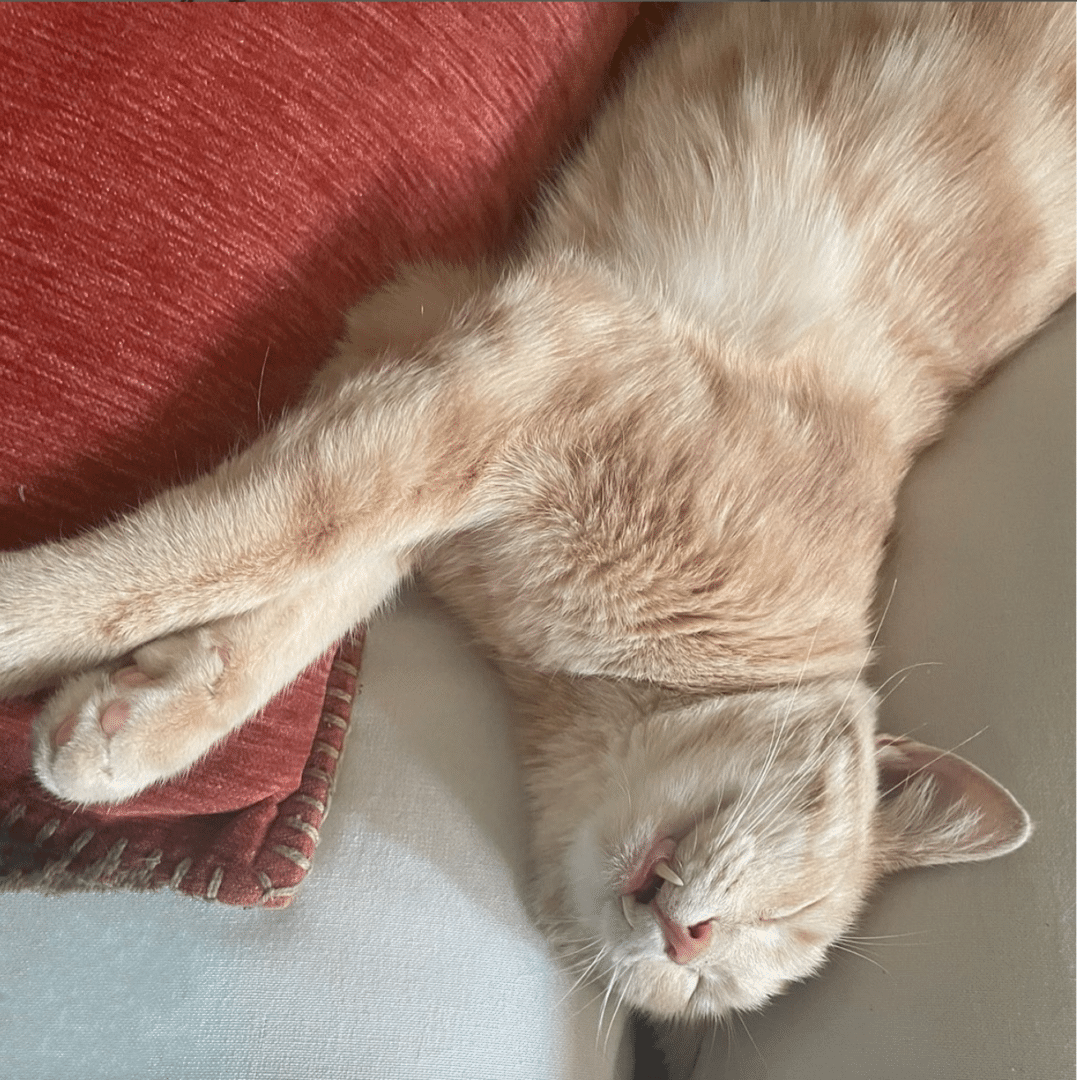 I would like to give a special “thank you” to Esmeralda Alvarez and Mellie’s co-parent/co-owner, Kate Estrada (Esmeralda’s cousin), for allowing me to share Mellie’s sweet story. Be sure to check out her TNR work on Instagram, and for more of precious Mellie, check out his Instagram here.

All Images Courtesy of Mellie the Vampire Cat on Instagram

Tips For Introducing A New Kitten To A Resident Cat