Fashionable Female Ginger Tabby Has A Thing For Clothes

Now, I’m not one to dress up kitty cats, but that’s likely because I’ve never had a cat that liked clothes. I’ve been a long-time fan of Rover, the runway-walking black feline, and recently I stumbled across a most fashionable cat in India that’s making heads turn across the globe. She’s fierce, she’s fashionable, and she’s here to show you the best glow-up you’ve ever seen.

Once just a sick little kitten desperately in need of love and care, little August has blossomed into a full-fledged cat star that’s always ready to strike a pose in her latest garments. I caught up with August’s cat mom, and thankfully she shared her cat’s story with me and gave me permission to share her photos. I’m very happy she did because I simply can’t get enough of this cat’s effortless cattitude—and something tells me that you’ll love it, too!

So, everyone, meet August, the fanciest feline you’ve ever laid eyes on! 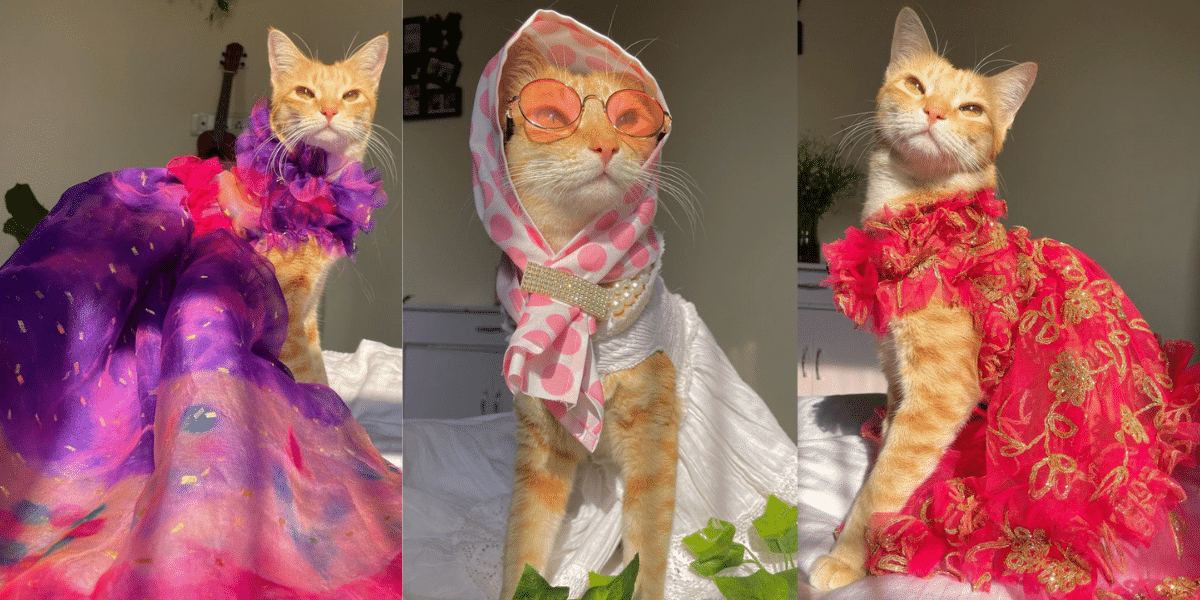 How did August come into your life?

I was strolling down my Instagram when I found a cute ginger cat sleeping on the bed with a blanket. I found it very cute and wanted to have the same cat. I was doing my degree and had never thought of adopting a cat. But I was very impulsive and wanted a cat so I started to look for adoption camps. That’s where I found a squad putting up kittens for adoption. I went on a Sunday to adopt one, but things didn’t work out as I had planned. Since I was living in a pg (paying guest), they thought it wouldn’t be safe for the kitten but I was hesitant to get it no matter what.

After a lot of hustle and bustle, a friend went in place of me to adopt the kitten. Also, I had a specific colour I wanted, which was ginger. But there was only one, but she was in a very bad condition. My friends told me not to get her because of her condition. It took a lot of time for me to decide because I wanted the ginger coloured kitten.

By the time I was convinced to get healthier kittens, people had adopted all of them and August was the only one remaining, so I had to get her which was by fate I guess! And today I’m the happiest and the luckiest cat mom ever. 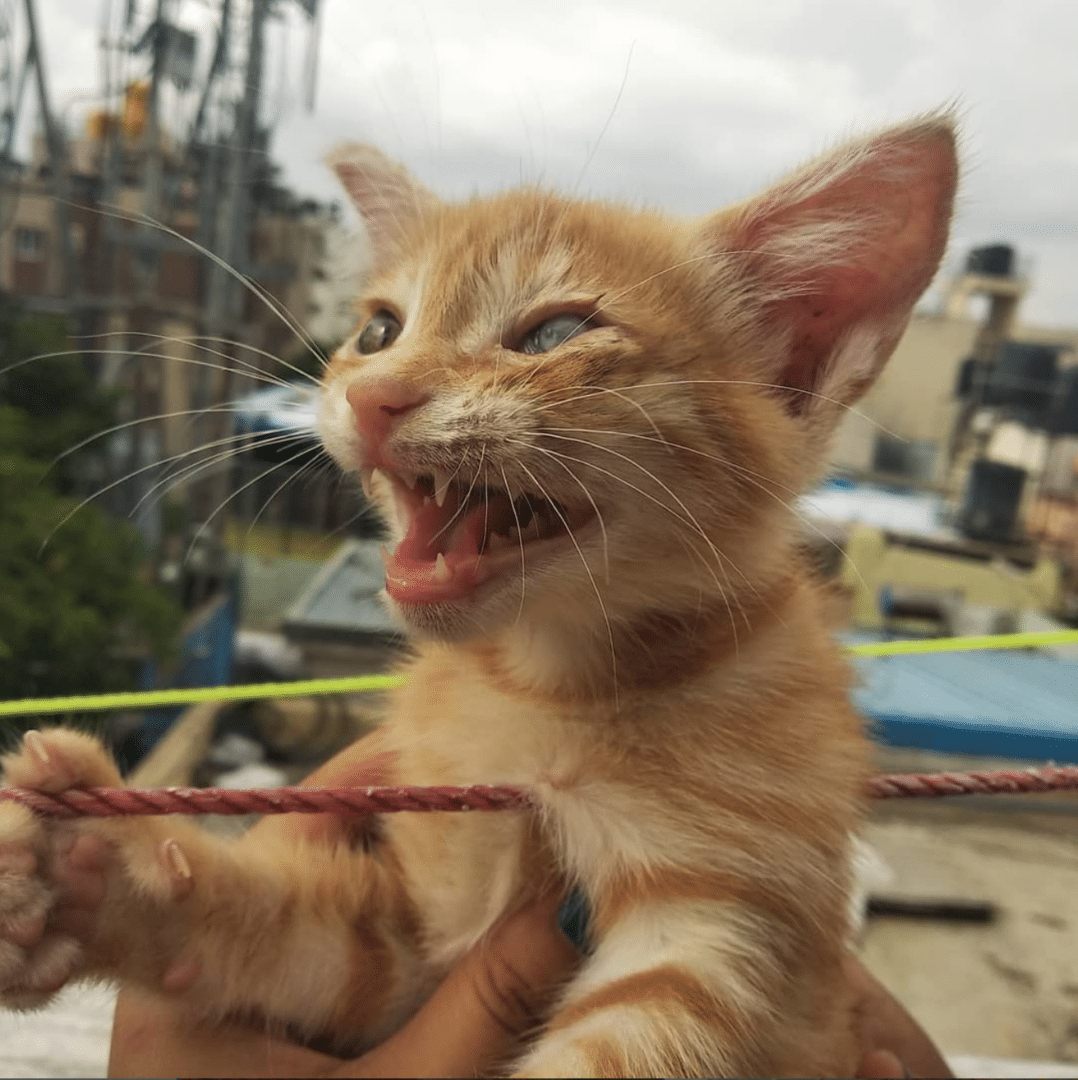 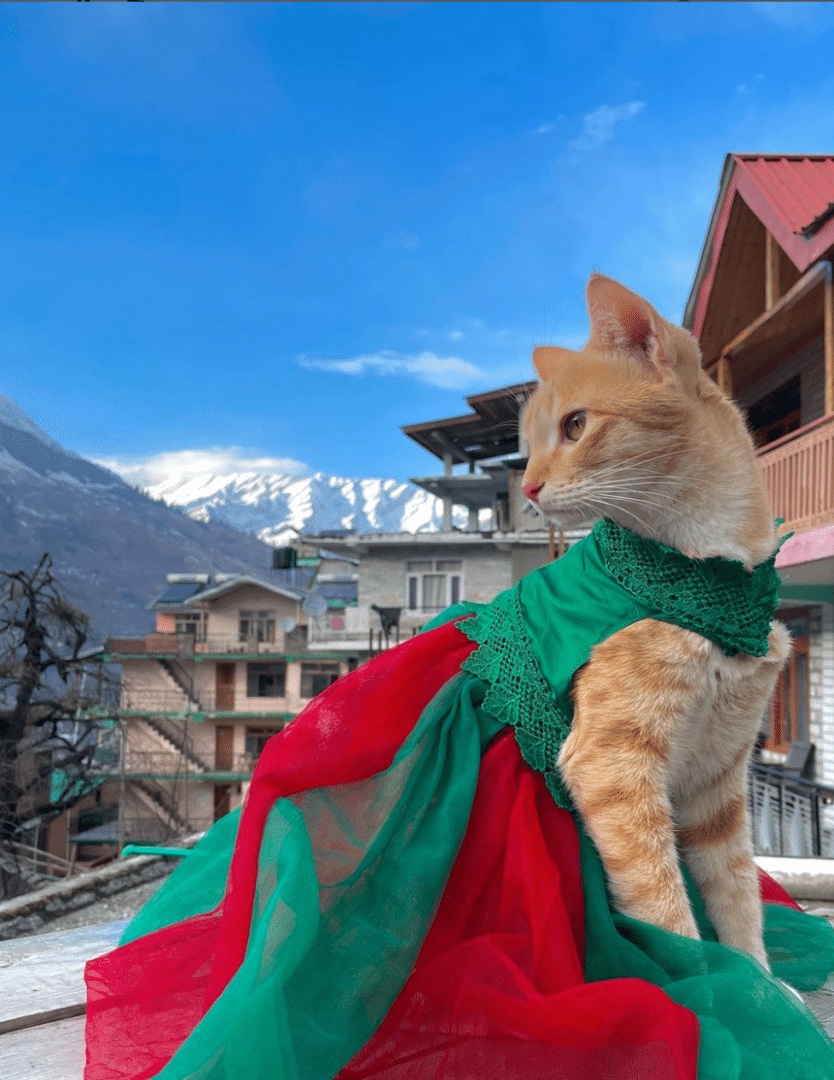 How did August get her name?

I’m really bad with names, so I asked my best friend Anna, AKA God Mom, to name my kitten. A few days later she came up with some cute names, and on the list, I saw August. I adopted her on the 4th of August and my bestie had put that name on the list she gave. So I immediately agreed on naming her August because it will hold a special place for both of us. Some people have asked me why I named her August and it sounds like a male cat name. But I have always loved her name and it suits her personality a lot.

She is very playful and active. I need to play with her every day and make sure she doesn’t get bored. August loves going on walks and exploring. She was a bit scared of kids because of the first approach not being very friendly to her. She loves travelling a lot and enjoys the fun adventure, not forgetting to pose for the camera. 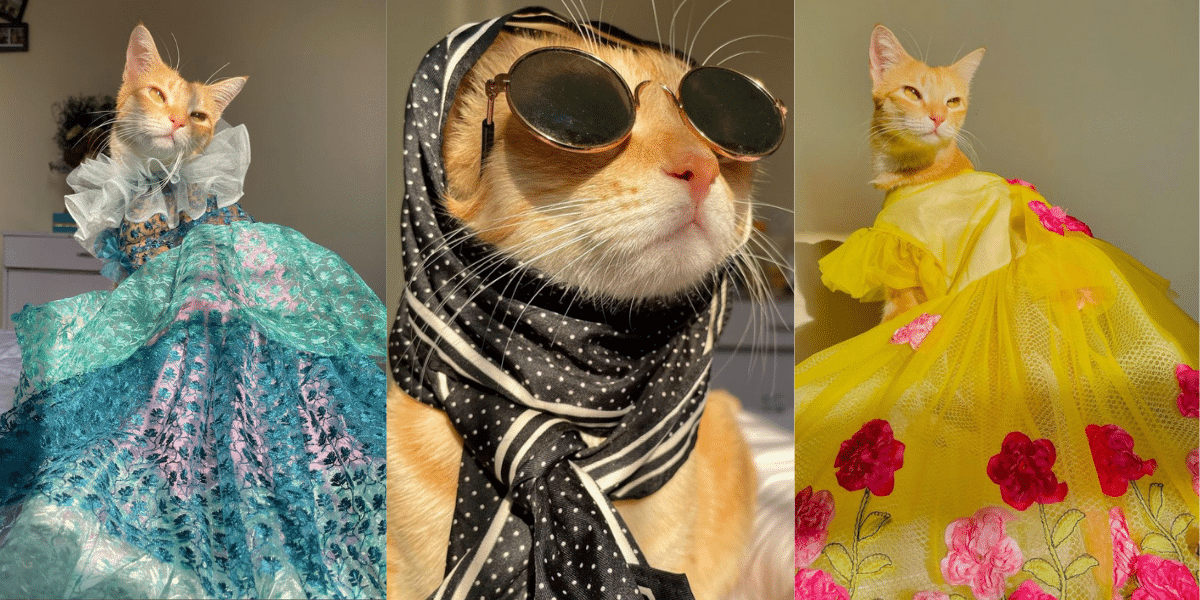 How did you realize that she liked dressing up?

The first time we made her wear a top made by her cat aunty Neelu, we were kind of skeptical because not all cats love wearing outfits. But to our shock, she had no problem with it and started to pose for the camera. So we made an Instagram account for her and now all of her clothes are made by August’s grandmother at home. We do not force her at all to wear outfits. She doesn’t like being carried on the lap, but apart from that, she is fine with posing for the camera and flaunting herself with the dresses. 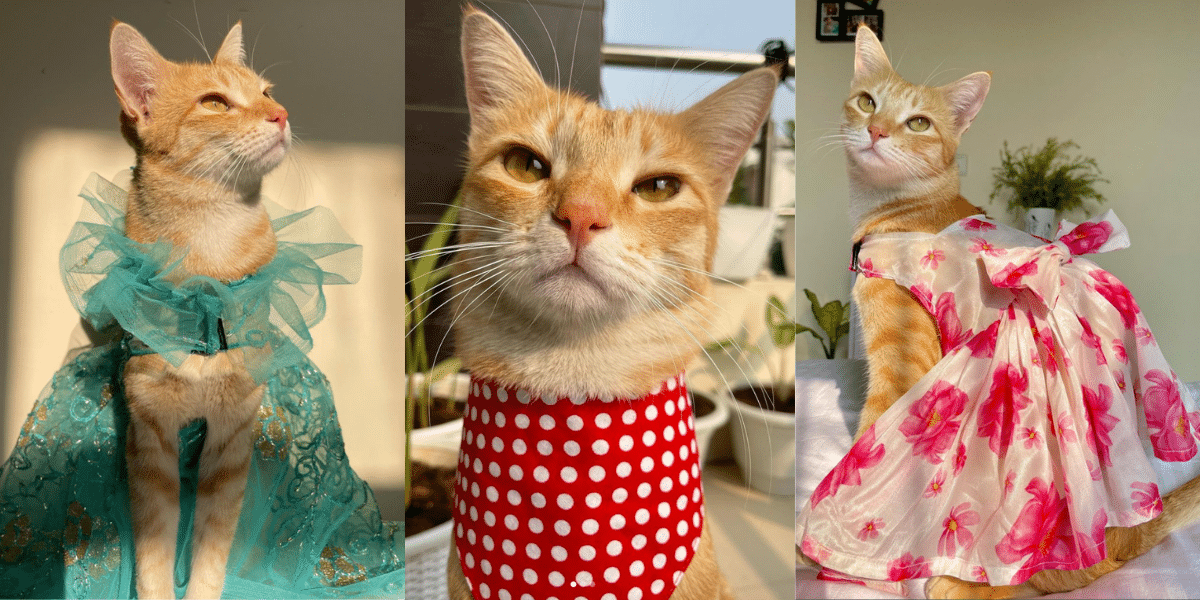 What’s something special you’d like people to know about August?

She is a very intelligent, fun, loving cat. Whenever we teach her tricks she learns them immediately and is more like a human than a cat. My very first daughter and my sister, my parents love her so much. We are so blessed to have her in our life and the joy she spreads like a happy virus. Having a pet is a joy and I would say to everyone out there to love them unconditionally. August is and will be my first love ever. 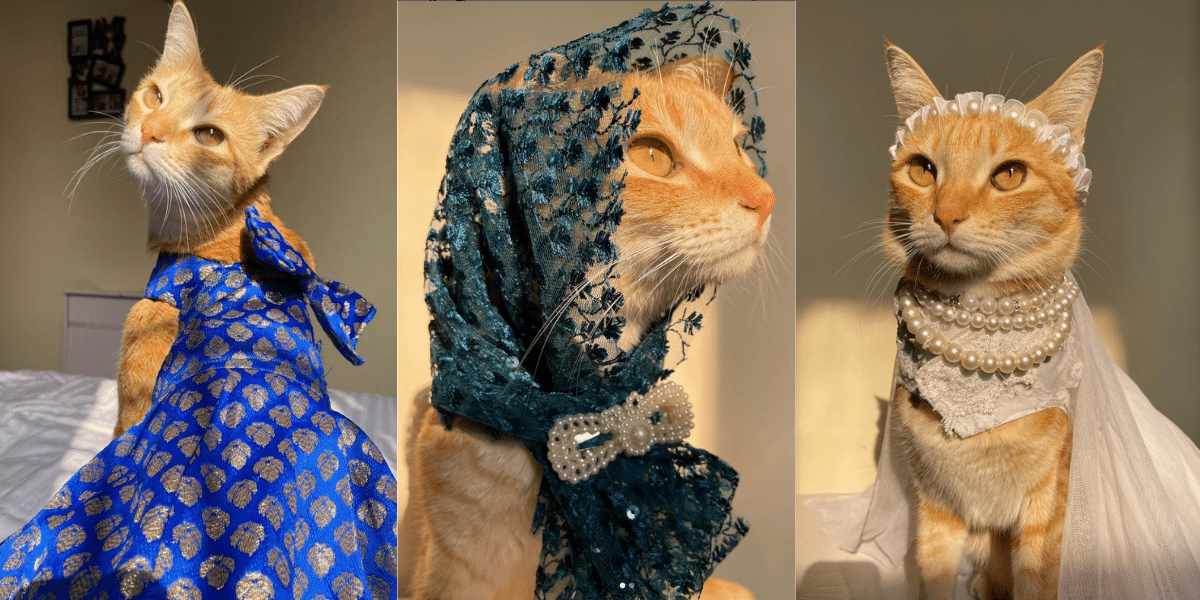 I’d like to give a special “thank you” to August’s cat mom, Annie, for allowing me to share her story and cute pics with all of the Cattitude Daily readers. Don’t forget to share if you know someone else who would adore this cutie pie. And for more of this fashionable feline, be sure to check her out here on Instagram. 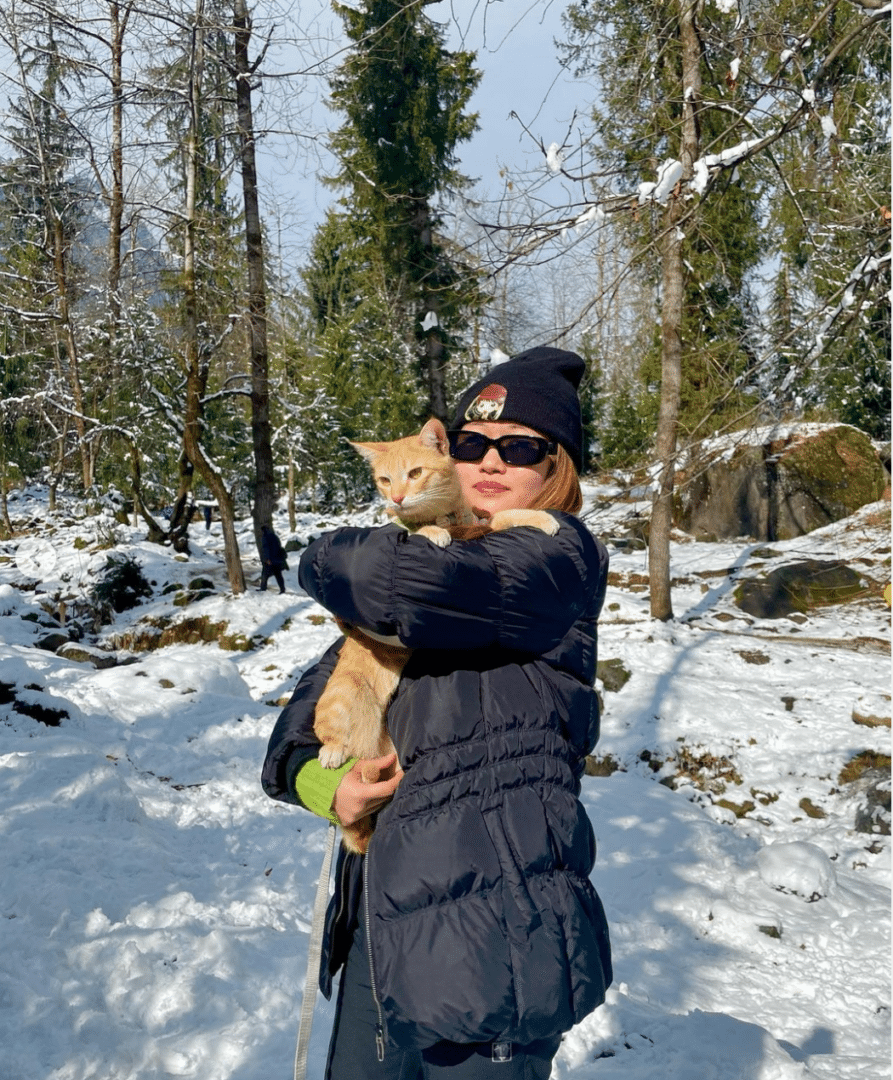 All Images Courtesy of August the Ginger Cat on Instagram

Tips For Introducing A New Kitten To A Resident Cat

Tips To Introduce Your Cat To Kids