While we can’t give any of these questions definitive answers, scientists have taken a closer look at whether or not cats are capable of self recognition and how they perceive their own reflections. Here’s what we know. 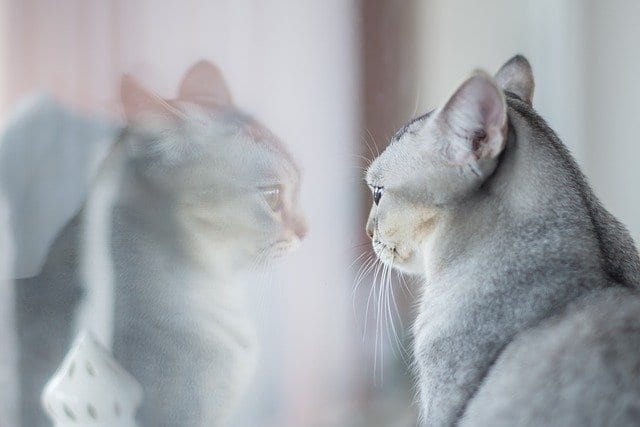 Self recognition is all about your ability to see yourself as an individual, understand your own character, and be generally aware of how your being, your existence, is separate from those around you. It’s a kind of inner knowledge, but it also relates to what you see when you look in the mirror.

From the age of about 18 months, humans look at their reflection and recognize themselves. We look into our own eyes and analyze our own facial features all while knowing ourselves physically, emotionally, and spiritually. We’re not quite born with this ability, but by the time we’re old enough to think for ourselves, understanding mirrors seems like a simple concept. But it isn’t. 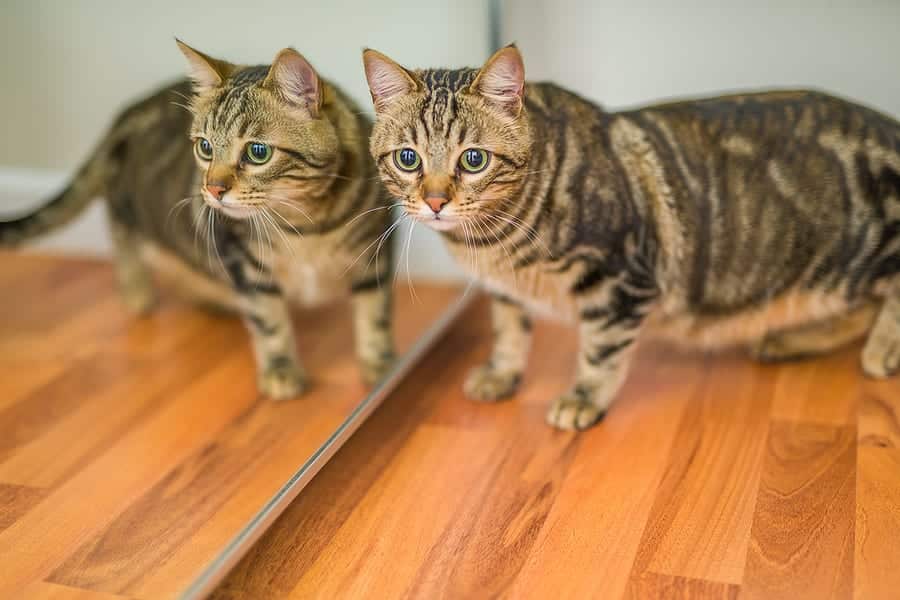 Self recognition through a mirror is actually a complicated aspect of cognition. It’s something psychologists have been studying for years in both humans and animals. Animal psychologist Diana Reiss told National Geographic,

“It takes a good deal of sophisticated integration of information about yourself and your own movements and what you’re seeing in front of you in that glass.”

The most well-known study on animal self recognition through mirrors took place in the 1970s by psychologist Gordon Gallup. Researchers observed several species of animals to determine which, if any, could look in a mirror and recognize themselves.

To do this, researchers placed an unscented red dot on an animal’s forehead and then placed them in front of a mirror. They watched for signs that the animal recognized the change in their appearance which would indicate they had sense of self recognition.

Very few animal species passed the test. Asian elephants, great apes, dolphins, and magpies are all on the list of species that most likely have self recognition. Cats, however, didn’t make the cut. 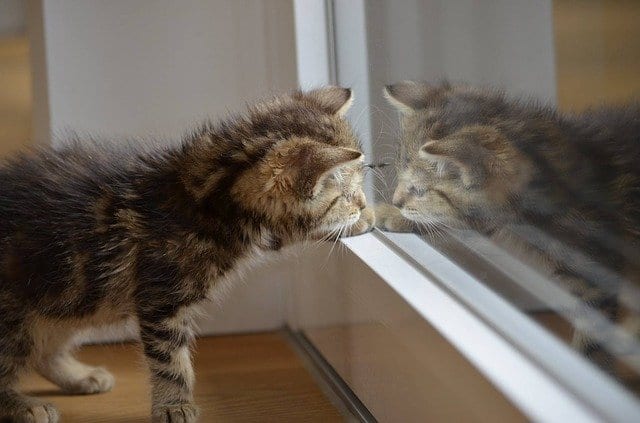 Gallup’s experiment, along with others that are similar, suggest that cats don’t understand mirrors in the way we do. These studies, of course, are far from conclusive. There’s always the chance that cats see themselves in the mirror and simply don’t care that they have a dot on their forehead.

There’s also the theory that cats don’t act like they recognize themselves because their primary sense isn’t their vision, but their sense of smell. Cats recognize their humans and fellow pets not so much by looking at them, but by smelling them. Everyone has a unique scent, and scent can be a much more reliable identifier.

If They Don’t See Themselves, What Do They See?

Accepting that cats don’t understand mirrors in the way we do, we have to wonder what it is they think they see. Countless cats have at least some kind of reaction when they look at their reflection, so we know they’re thinking something.

A lot of cats will try and look behind the mirror or off to the side as if expecting their reflection to manifest into another cat. Others, like the cat in the video below, show defensive behaviors. This suggests that while they probably don’t recognize themselves, they most likely recognize the reflection as a fellow feline—or at least another animal.

There’s also the possibility that cats see the reflection, but completely dismiss it as unimportant. It doesn’t smell like another animal, it isn’t reaching out to grab them, therefore it’s not a threat.

Even with all these studies and theories, it’s impossible to really know if cats understand mirrors. Put your cat in front of a mirror and see for yourself how they react. What do you think they’re thinking?

Can Cats See In Color?

Does Your Cat Know When You’re Sad?