How Do Cats See The World?

Your cat has incredible eyes. These peepers help them to navigate in low lighting in ways that our eyes cannot. Their up close vision is not that great, but those whiskers help them to sense things in which they cannot see directly in front of their face. Have you ever wondered how your cat sees the world or if they are colorblind? You’re not alone, cat lover. Keep reading to discover how your cat sees, and see which colors that the two of you can see together.

How Your Cat Sees

The biggest difference between human vision and cat vision is in the retina. Cats have a low concentration of cone receptors with a high concentration of rod receptors. Humans are the complete opposite. This would easily explain why what we see differs greatly from what they see. 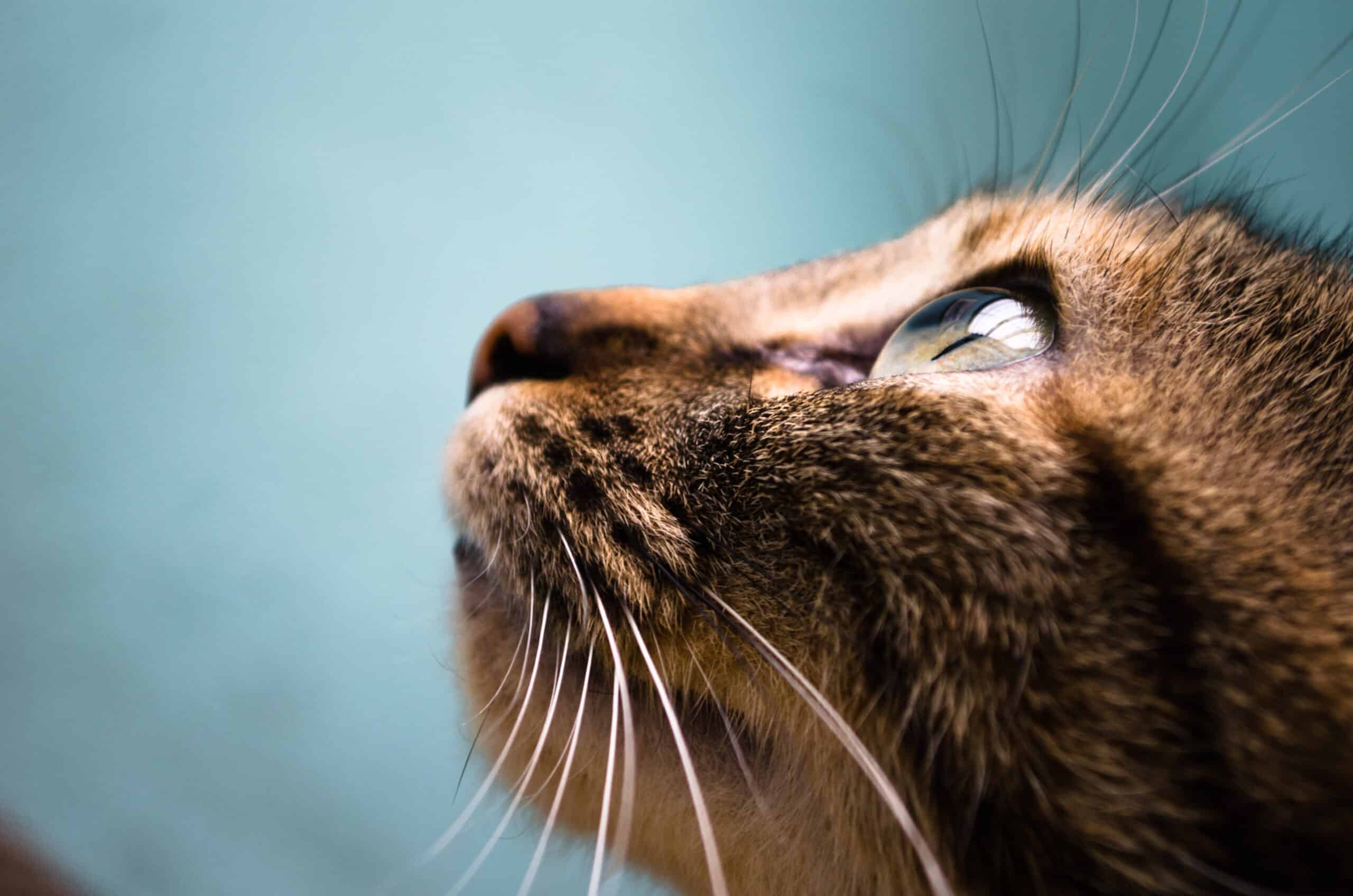 How Cats See Close Up

When a cat is hunting, especially a moving object such as a mouse, their powerful whiskers will sweep forward to help them sense the prey directly in front of their face which their eyes cannot clearly see. Your cat’s eyes are different from your eyes in that they do not possess the muscles necessary to change the shape of their eye lenses. If you’ve ever set anything directly in front of your cat’s face you may have noticed that they will quickly move their head back so that they can see it. Because their eyes are so large, cats can’t focus on anything less than a foot in front of them. 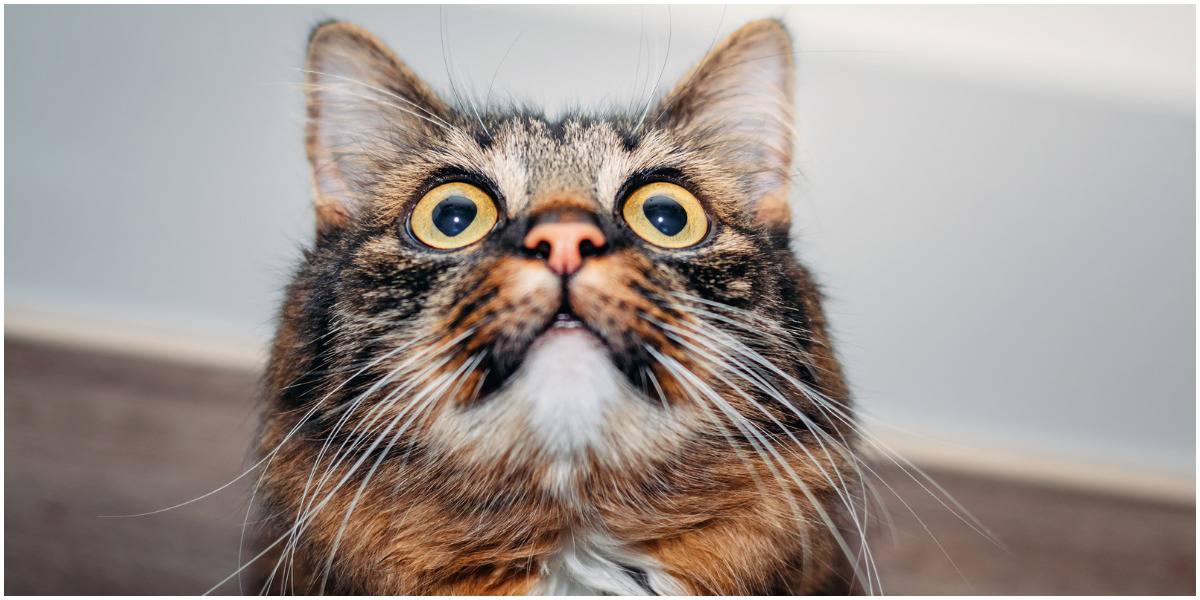 How Cats See From Far Away

According to LiveScience.com, it’s been discovered that cats have a wider field of vision than we humans do. We see things with a 180 degree view while our feline friend sees it at approximately 200 degrees. Your visual acuity is much better than your cat’s, though. While you see things at 20/20, your feline friend views them anywhere from 20/100 to 20/200. This would mean that your cat would need to be 20 feet away to see what an average human can see at 100 or 200 feet. Because of this, cats are considered to be quite nearsighted.

Check out this image below for a better idea, the top being what you would see, and the bottom your cat:

Why Cats See The Way That They Do

Your cat is most active at dawn and dusk, which is also referred to as crepuscular. Because of these dimly lit times in which they would hunt if they were in the wild, this explains their eye structure. Your cat’s big cat cousins have round pupils, while our domesticated felines have slits for their pupils. When compared to a human who has a low concentration of rod receptors, a cat has nearly 8x more rod cells. These rod receptors are more sensitive to low light. So, at night they can see better than we can, whereas during the day our ability to pick up on motion detection is much stronger.

“Humans have 10 to 12 times better motion detection in bright light than the cat or dog, since bright-light vision is a cone function,” says Dr. Kerry Ketring, a veterinarian with the All Animal Eye Clinic in Whitehall, Michegan. 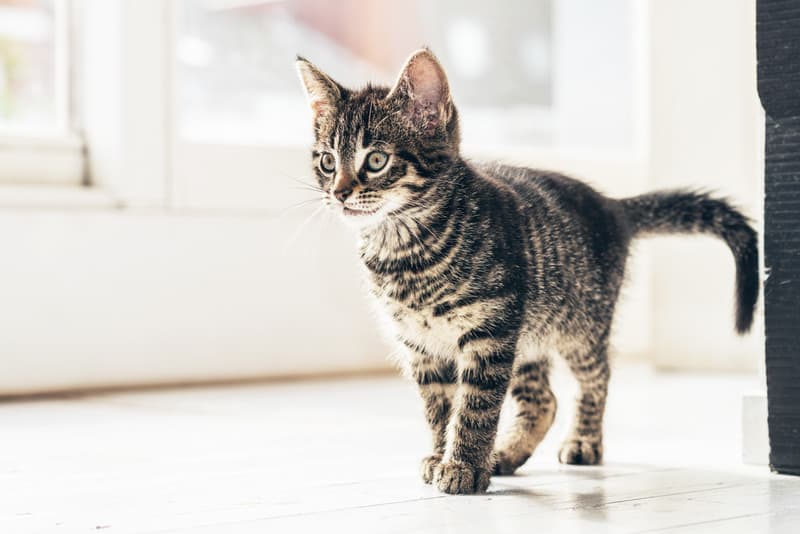 How Your Cat Sees Colors

Humans are known as trichromats. For a person with normal color vision, they have the ability to see the three primary colors. Cats are also believed to be trichromats but in a different way than we are. For them, pigments are much less vibrant and saturated when they see them. Nerve cells in the eyes are what controls the colors a person/animal will see. And the ability to differentiate colors is determined by the presence of the special color sensitive cells called “cones.”

Many believe that cats are colorblind but such is not the case. Our cats do have the ability to see colors, but due to their shorter color spectrum their eyes cannot differentiate them the way we can. Extreme color differences can be seen, such as red compared to green. For our feline friends, the easiest colors for them to see are blues and greens. When it comes to colors like red and pink, those might be difficult for them to differentiate. Feline photoreceptors are most sensitive to wavelengths in the blue-violet and greenish-yellow ranges. This is why many vet-approved toys you see on the market feature colors that cats can see and will likely be more attracted to.

Below gives you a better idea of how cats see color in comparison to humans:

Cats love laser pointers for many reasons, but the color of that laser pointer that catches their interest usually has a little something to do with it, too. (Mainly, they are attracted to the dancing movement of it and their desire to “catch” it.)  When it comes to movement, our eyes might be able to detect the slightest movement in regular lighting. While your cat might perceive it as a stationary object and think nothing of it. Maybe that’s why they ignore so much…🤔 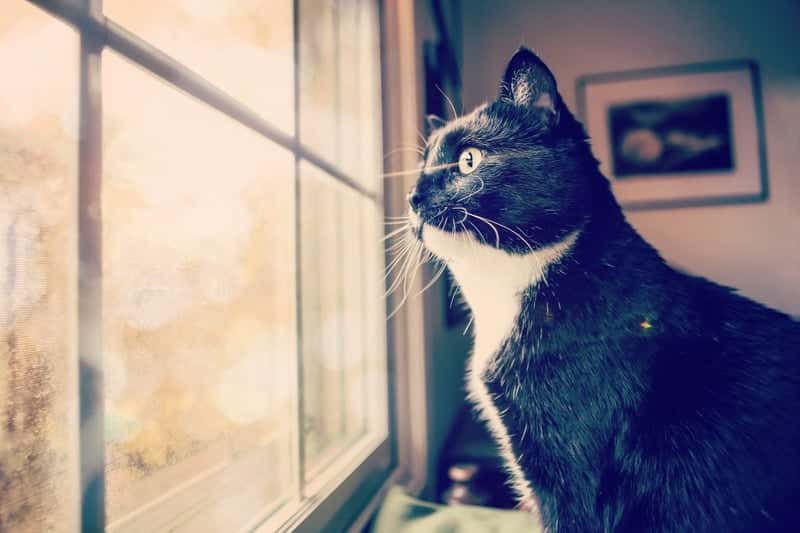 Have you ever wondered why it is that cat eyes will glow in photographs or when light is shined into them at night? Learn about eyeshine here on cattitudedaily.com.

Five Reasons Why You Should Never Declaw Your Cat

The Slow Blink: Why Cats Do This To Us—And Even Other Cats