Majestic and mysterious, the Canadian Lynx is a wild cat that lurks in snowy cold forests in North America. These cats may not be as big as lions, but they are definitely fierce.

Read on to learn more about the elusive and extraordinary Canadian Lynx! 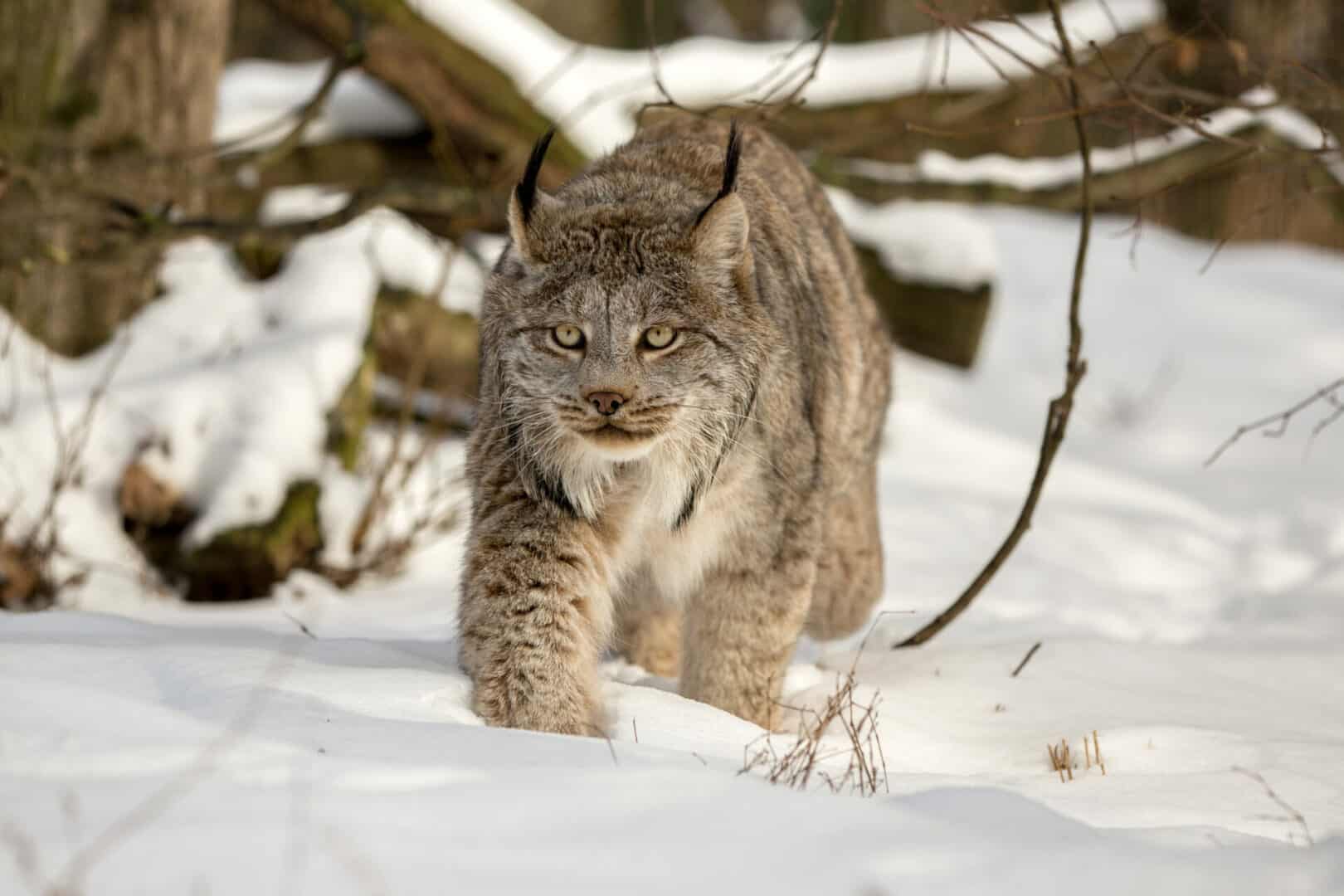 Yes, the Canadian Lynx and Bobcat do share the same genus and a similar physical appearance. But, they are two very different animals. Also, they live in distinct environments, especially the Lynx. These two animals actually only cross paths in one area – along the U.S. -Canadian border.

Yes, the Canadian Lynx mostly lives in Canada while the Bobcat can live all over North America. That’s not the only difference these cats have. The Bobcat can arguably look more like an overgrown housecat, whereas the Lynx has a little more wild-looking.

This Lynx is larger than the Bobcat, with much longer legs and larger feet. Also, while both animals have very short tails, the Canadian Lynx has a black-tipped tail, whereas the Bobcat has a white-tipped tail. 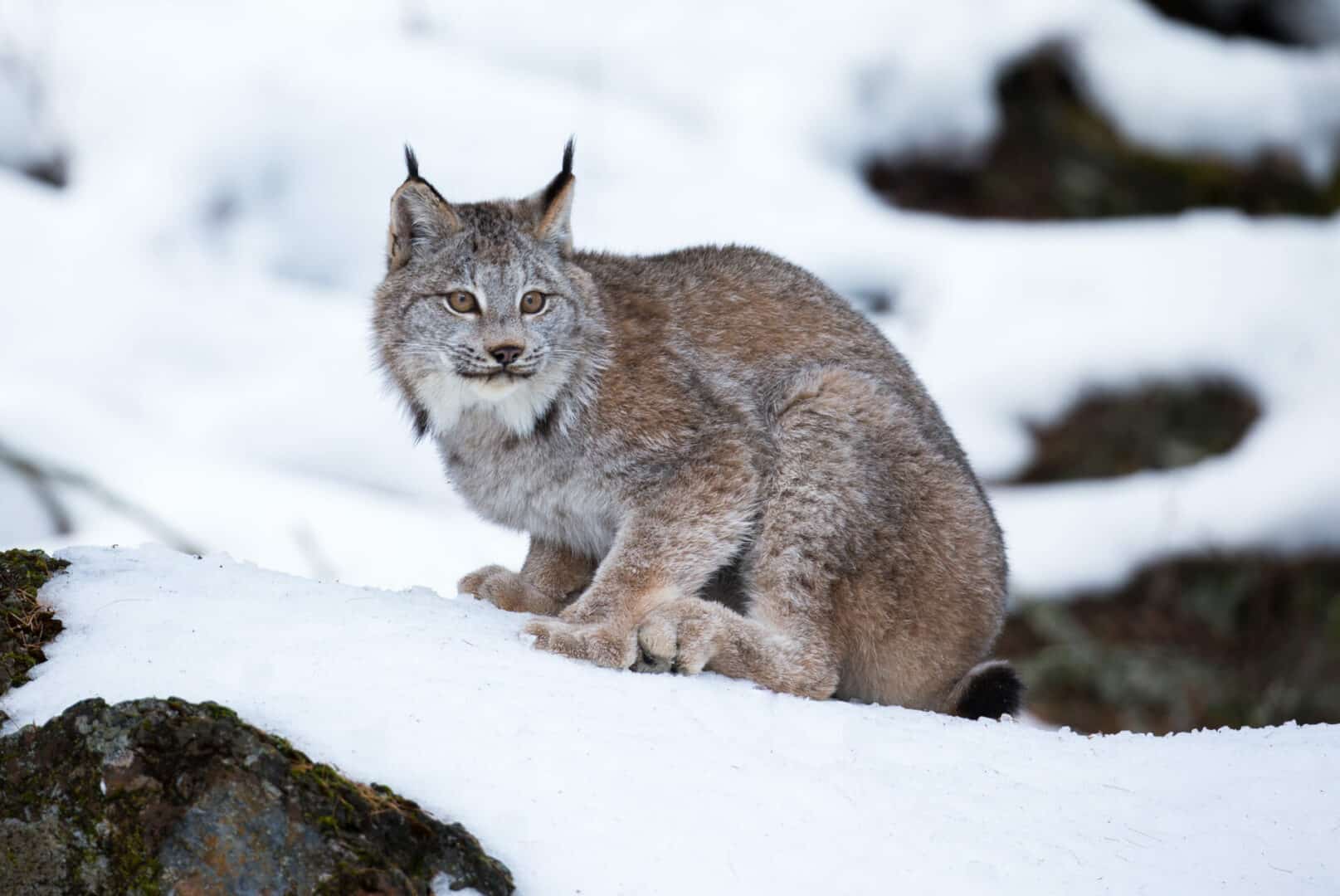 The Canadian Lynx loves the cold

With ‘Canada’ in its name, it is no surprise that this big cat loves cold temperatures. This Lynx typically lives in a taiga, or boreal forest. These kinds of forests are quite cold. We’re talking freezing temperatures more than half the year.

Canada’s Lynx doesn’t just live in Canada. This cat can be found in Alaska as well as the many Northern U.S. States as well.

These cats prefer a solitary life

Just like their Bobcat brethren, Canadian Lynx also likes to be alone. These cats are such solitary creatures that some say they haunt the forests like ghosts. That’s what gives this Lynx its fascinating nickname ‘the grey ghost of the North.’

There is one time, though, when this Lynx isn’t alone – breeding season. Female Lynx stay very close to their cubs. However, you won’t find a male Lynx sticking around once mating is done. 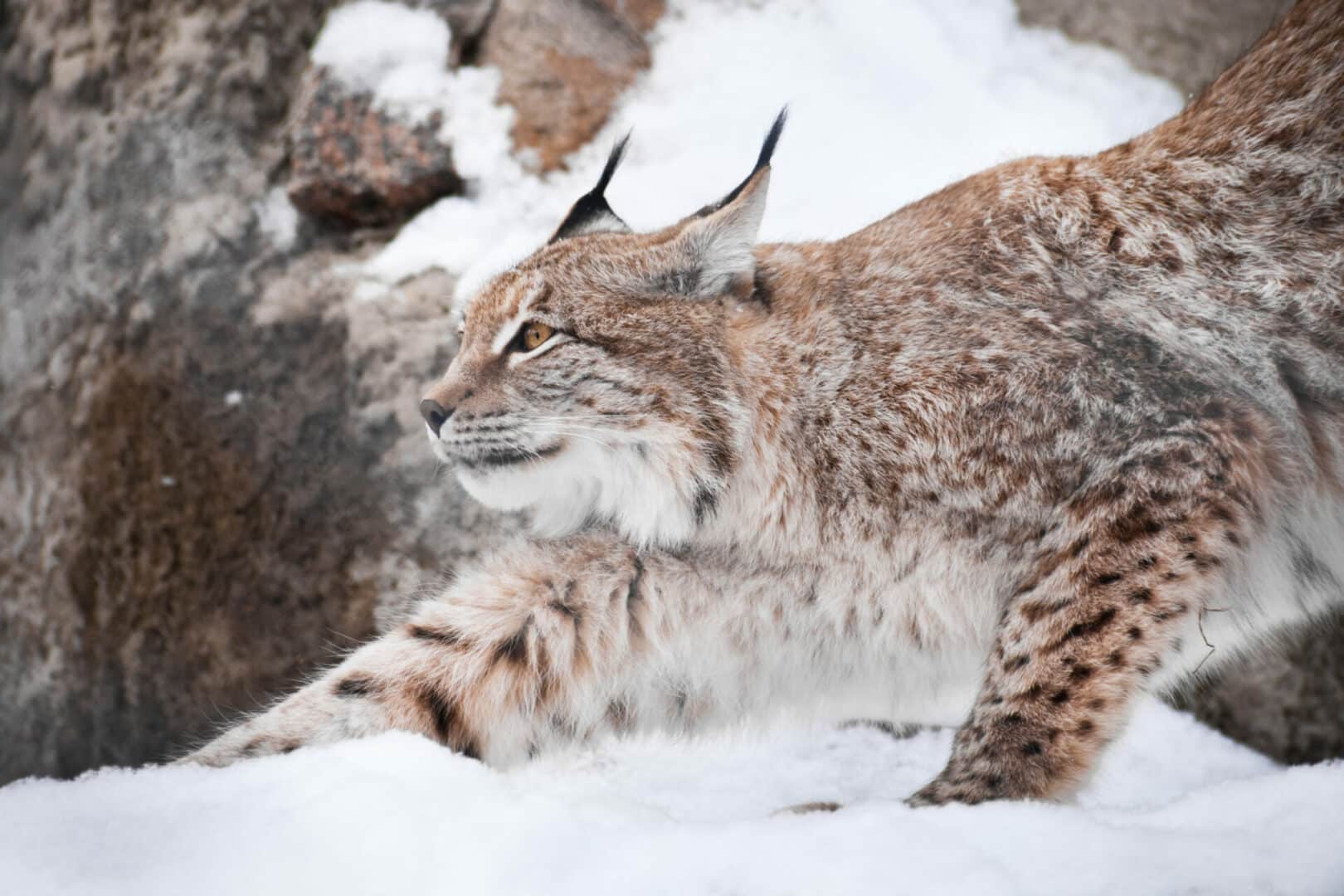 The Canadian Lynx is definitely a fierce kitty. But, these cats and their fuzzy bodies weren’t built for running. Instead, these expert hunters stalk and ambush. This skillful hunting method helps the Lynx adequately catch their prey, without having to chase them down.

But, these cats still control a pretty big territory

Running isn’t a necessary qualification to control an entire territory. You’d be impressed to discover that the Canadian Lynx can maintain a range of up to 83 miles. That’s almost double the size of San Francisco! 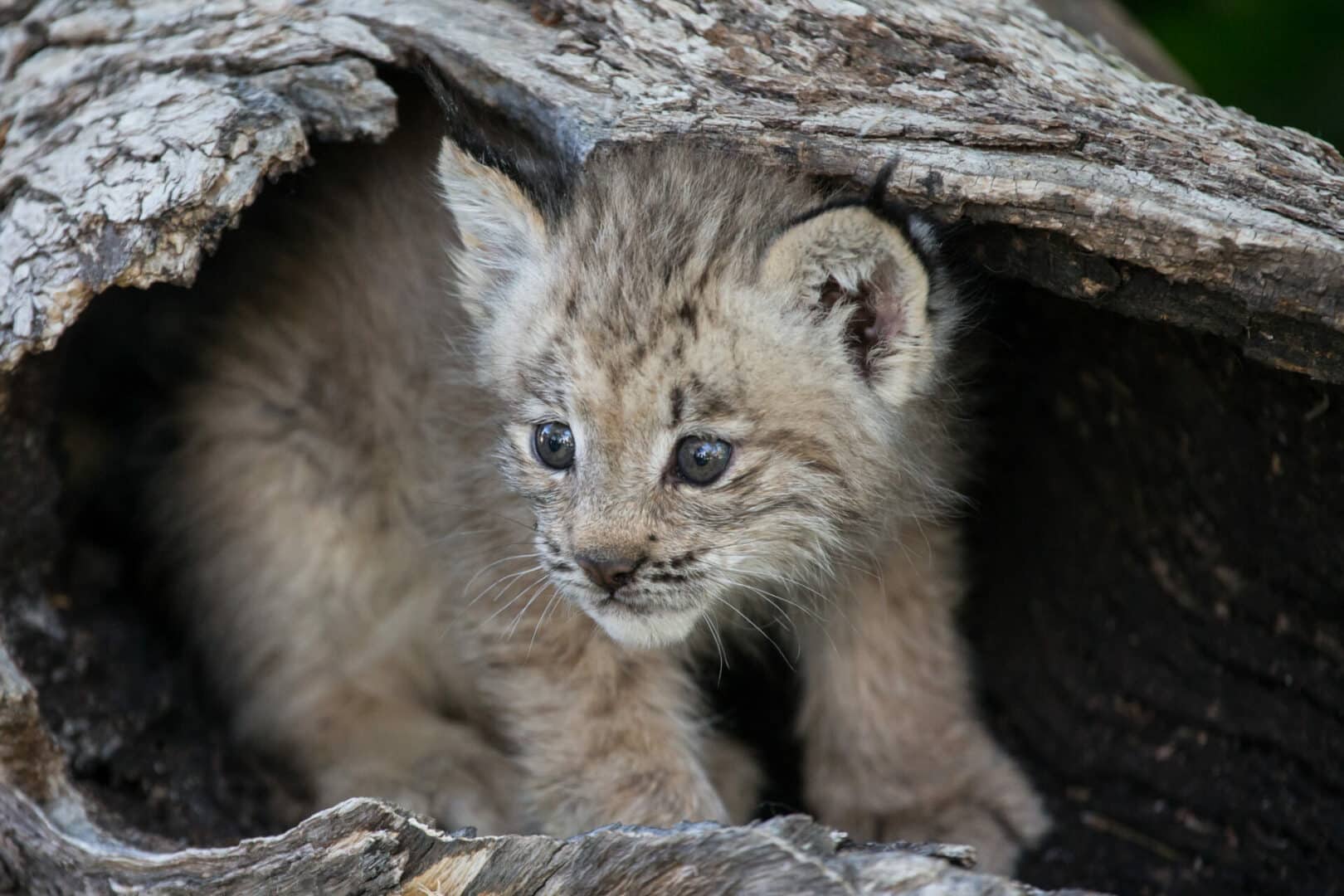 These cats know exactly what they like to eat

The diet of a Canadian Lynx isn’t a mystery. Around 90 percent of their diet are snowshoe hares, which these magnificent cats chase down in the snow. Since the Lynx is the snowshoe hare’s exclusive predator, the decrease in the hare population can sadly decrease the Lynx population.

Fortunately, this Lynx has adapted to eat other small animals. But, not enough to sustain their preference for the snowshoe hare.

While most big cats are known for their dens, Canadian Lynx do things a little differently. These cats prefer to take refuge in tree stumps, bushes, or rock ledges. Sometimes, these cats take refuge in fallen trees.

These cats even have snowshoes as paws

These Lynx live in very cold and snowy forests, which are hard to navigate for most animals. But, not this Lynx. These cats have big and extra furry paws that act as their own snowshoes. This way, this big cat can successfully move around the snow and hunt its prey. 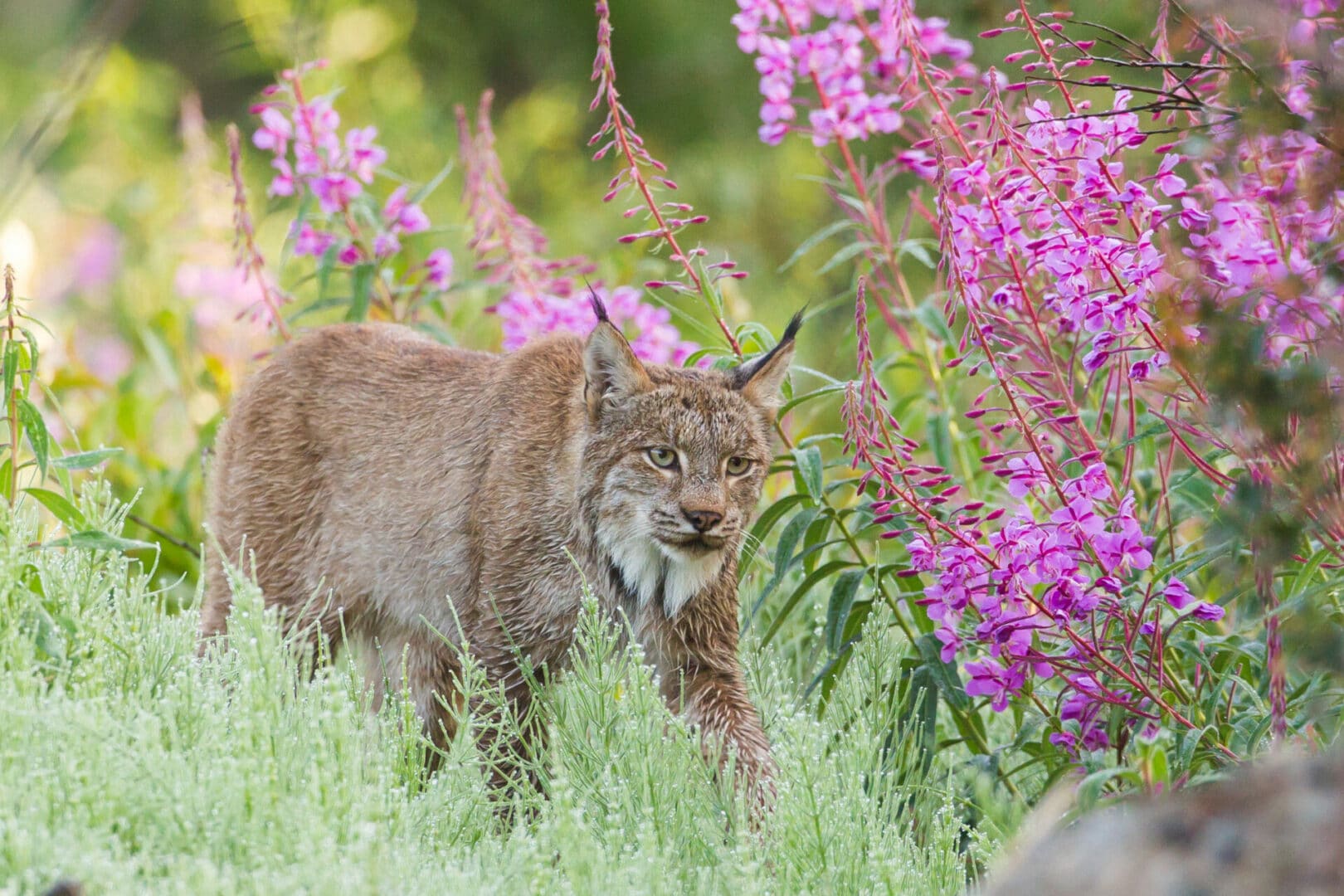 The Canadian Lynx is endangered

Although this cat may be super elusive, this Lynx still is considered endangered under the Endangered Species Act. Unfortunately, humans are the culprit for the disappearance of the Canadian Lynx population. Their habitats have been fragmented or destroyed by several building initiatives, from logging to road-building.

To protect the Canadian Lynx’s habitat, there are many initiatives you can support. These unique creatures deserve to keep their homes.

Canadian Lynx are very cool cats. The chances you’ll see one in your lifetime is rare – these cats are skilled at hiding. But, we can still marvel at them and their amazing capabilities from afar.

Are you a lover of the Lynx? Leave a comment to share your thoughts on this impressive big cat! 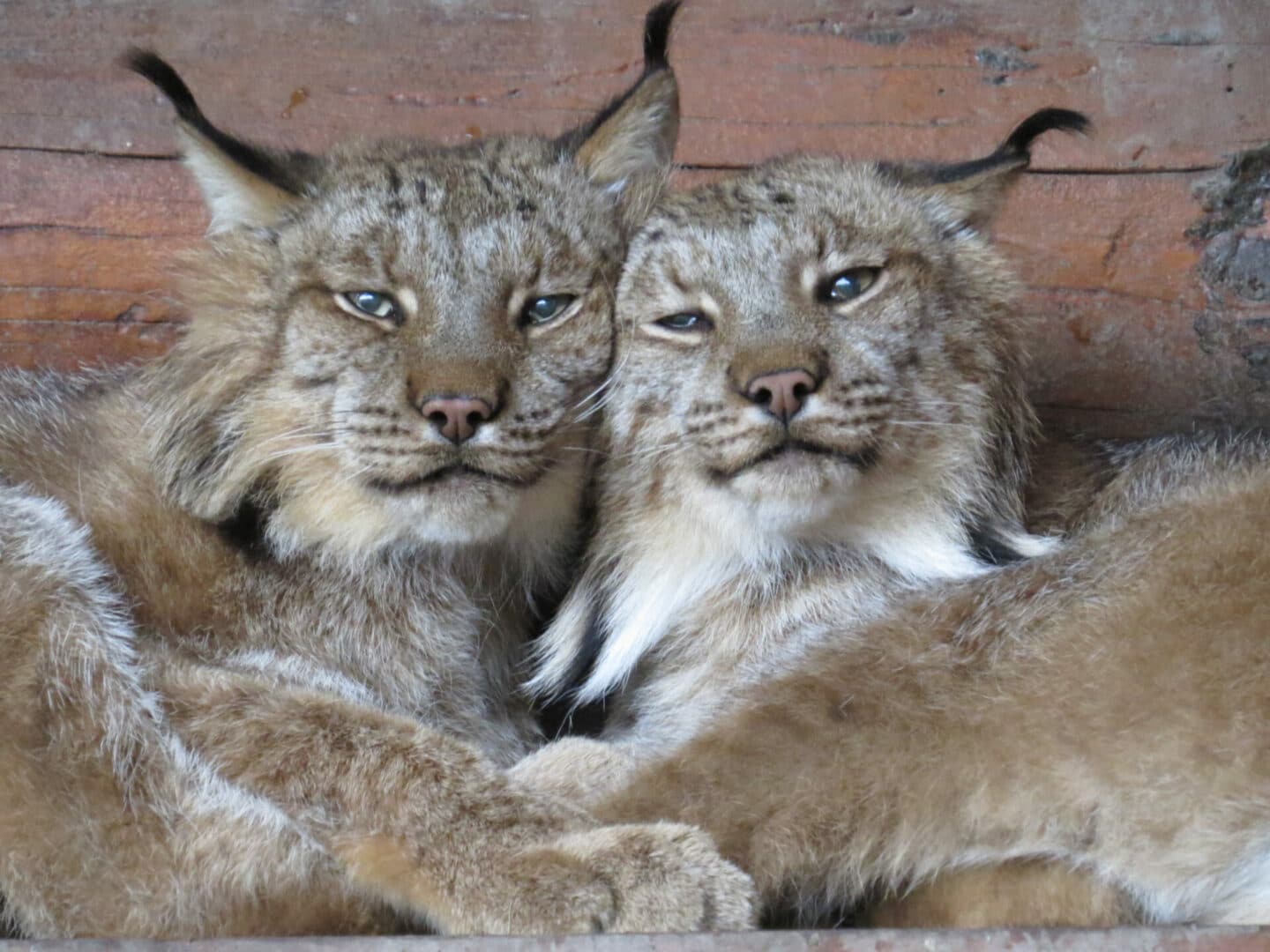 Feline 411: All About The Ocicat

Meet Toby And Mr. Mika: A Pair Of Precious Ragdoll Cats To Brighten Your Day