Atlas and Trico are two rescue kitties living their best nine lives in Elk Grove, California. And their cat dad, Justin, brought them into his life because he wanted a friend for himself to keep him company, and then a friend for his older cat, Atlas. And just like I’ve said many times, some of the prettiest and most unique cats of all are shelter cats—and Justin knows this, too!

Not long after bringing his two blue-eyed beauties into his life, he realized just how photogenic they are. Justin began sharing their images online, and quickly his cat housemates garnered likes and attention. And, judging by their images, it’s easy to see why! I caught up with Justin when I came across some photos of his kitties, and obviously I was smitten and wanted to feature them on my website. Thankfully, he agreed—so keep reading to learn all about this rescued pair of cats that now spend their days posing for the camera and being adored. 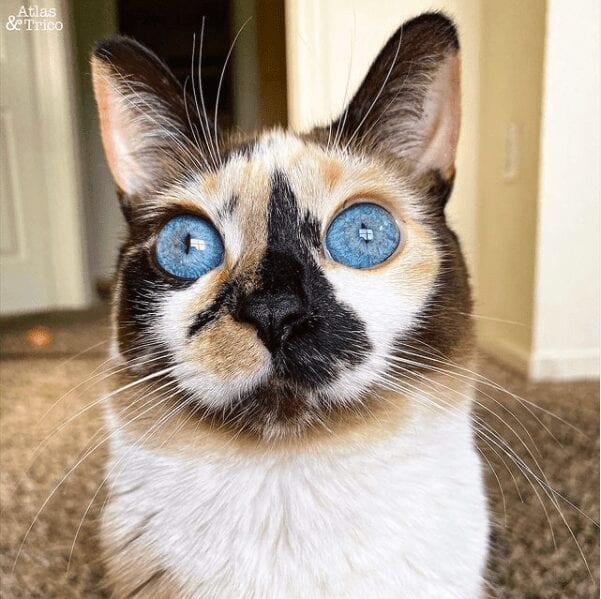 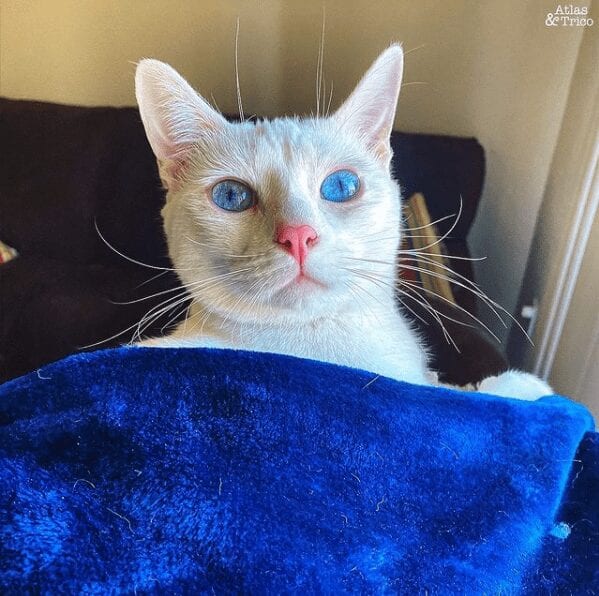 How did Atlas and Trico come into your life?

I got Atlas from the Sacramento SPCA in August 2018. I owned a cat before when I was in a relationship, but I left her with him after our break up. I was living on my own and wanted a companion, and I saw Atlas (then Lucy) on the Sacramento SPCA website. I was at work when I saw her profile, and was automatically blown away by her patterns and how small she was (4lbs at 1 year old). I was the first in line with the application already filled out, and I took her home that day. She had a litter of kittens when they found her on the streets, and all of them got adopted as well.

After a year, I felt Atlas could use a companion because I was at work all day. I found Trico (then Paul Newman, the blue eyes) at an adoption agency called Purebreds Plus (they adopt out more exotic cats when there is a breeder death, overpopulation, etc.)  I adopted him at 12 weeks old in August 2019. 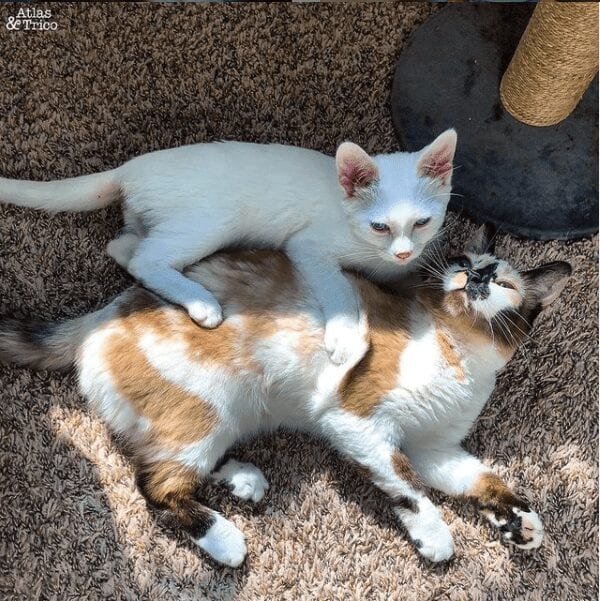 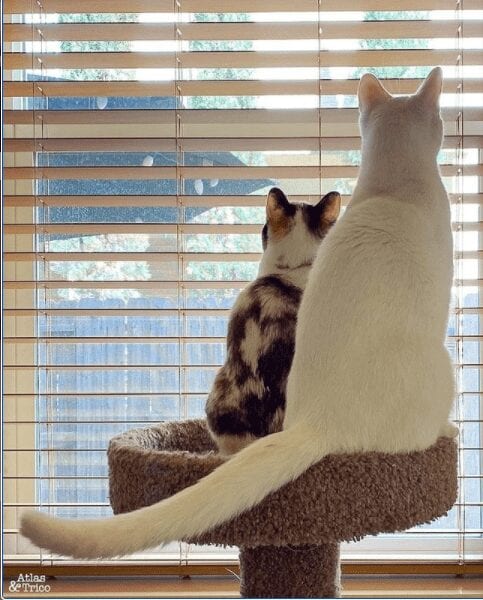 Do you have any fun nicknames for them?

Yes! I always call Atlas Atlas-sama or just Sama LOL and I call Trico Trico d’ Beepo (my old roommate’s nickname for him).

Because she was a stray for the first part of her life, Atlas is less sure of others. She’s not at all a lap cat, and took some time warming up to me. Now she likes being pet beside me on the couch and sleeping in bed with me, and she is very demanding for pets and attention. She’s very dainty and particular. She gets along well with people for the most part, and she’s super patient in front of the camera.

Trico is a little skittish of new people, but once he gets to know you he loves laying on your lap and headbutting you everywhere. He’s extremely loving, but a goofball – he loves to rough house with his sister and run around. He’s kind of a mess, he sneezes like a human and wipes his snot on me, and he doesn’t always do a thorough job cleaning himself (typical boy). 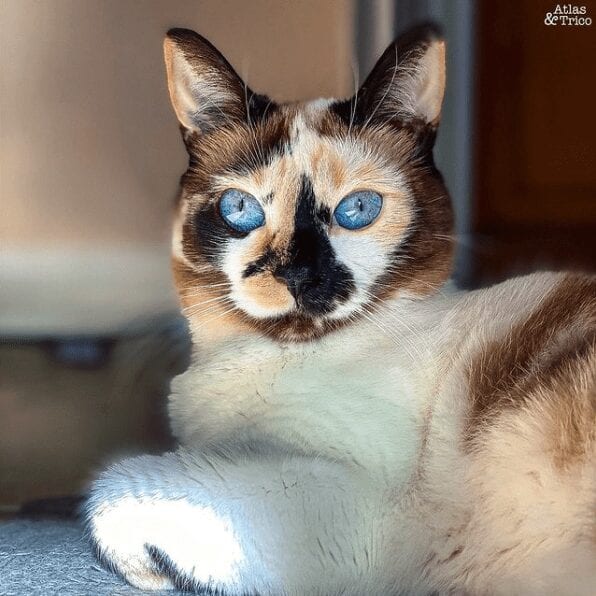 He loves sleeping on the cold tile and making  biscuits on me during the afternoon while we lay in bed together. Both of them absolutely love when the windows are open so they can smell the fresh air and watch the birds outside.

Do they have any other cat or dog mates?

Not yet! I’d love to get a puppy at some point, I’ve always wanted a big husky/wolf or something like that. 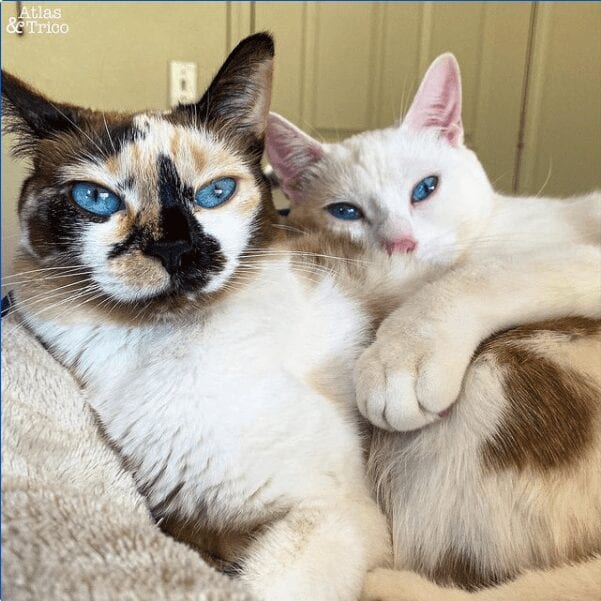 What’s something special you’d like people to know about them?

Atlas and Trico have really been there for me in the ways I really never knew I needed. On the days where I was alone and had a hard day, they were always there to comfort and heal me. They’re incredible animals with big hearts, and I’m glad they can bring me joy and joy to all of their friends on Instagram.

I’d like to give a special “thank you” to their owner, Justin Martin, for allowing me to share their story and precious photos with all of the Cattitude Daily readers. Can’t get enough of these blue-eyed beauties? Keep up with them on Instagram @AtlasandTrico. 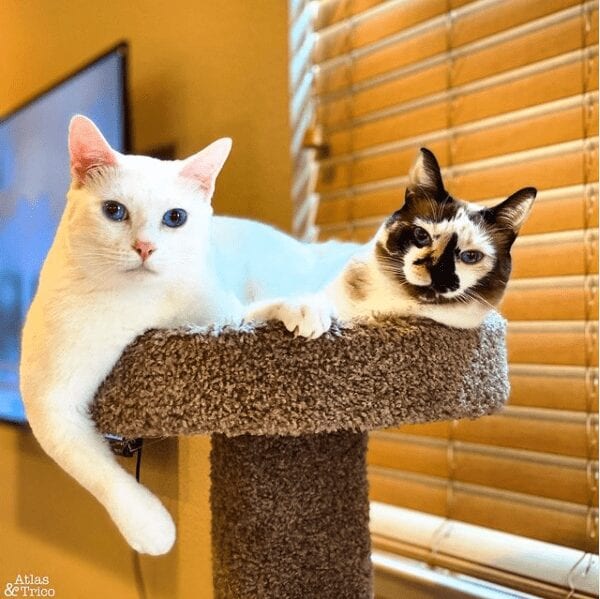 All Images Courtesy of Atlas and Trico on Instagram

Can Cats Get Hiccups?

Why Don’t Cats Meow At Each Other?