Angus is a beautiful cat that is thriving and lives a life full of love, but things didn’t start out this way for him. At just a few months of age, an evil person decided to burn him with either a chemical or liquid substance. Thankfully, justice was served to this monster, but Angus was left in poor shape needing around-the-clock care if he had any chance of survival.

Because of the horrific incident, the Calgary Citizen shared that,

“Over his lengthy recovery in CHS foster care, Angus lost skin, several toes, half his tail, and the tops of his ears. He eventually got to a point where, despite his permanently altered appearance, he was healthy enough to start enjoying life in an adoptive home. Angus is a sweetie pie.”

Since this near-fatal abuse occurred, Angus has shown the world just how strong he is and that a cat’s gentle spirit cannot be broken. He is now loved, and happy, and doesn’t have to worry about ever being harmed again. I caught up with his humans, and they agreed to share some details about this special cat who is an inspiration to us all. 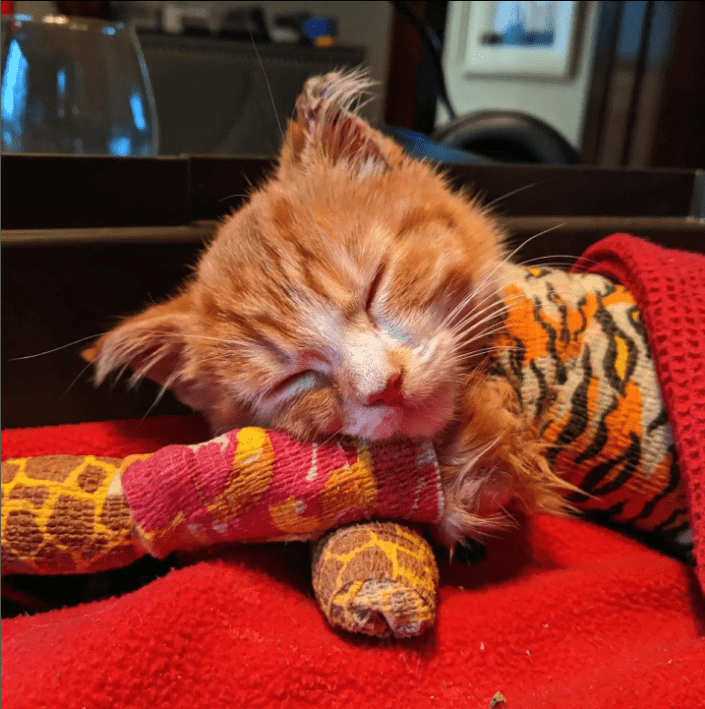 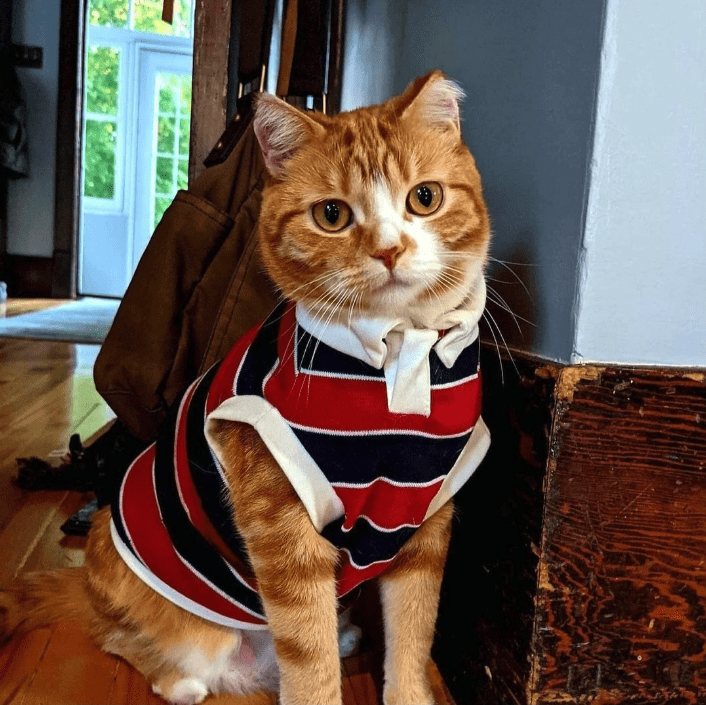 How did you meet Angus?

Angus was part of a criminal investigation that was brought to my attention. During that investigation, he was transferred to the care of Margaret (a forensic veterinarian) and her team to document his injuries for evidence and to try and bring him back to being a healthy kitten. It broke our hearts to see him in the state he was in the first time I saw him in person, especially when he purred despite the trauma he was healing from. To this day his case is the only one that we both get teary-eyed when we talk about it.

He did have an original name that came with him but he needed to change that. We joke that he was in witness protection while he healed and needed an alias. For the first few weeks, we didn’t rename him. Margaret was uncertain whether he would make it back from his injuries. When he turned the corner it was the Crown Prosecutor on the file that gave him the name Angus. 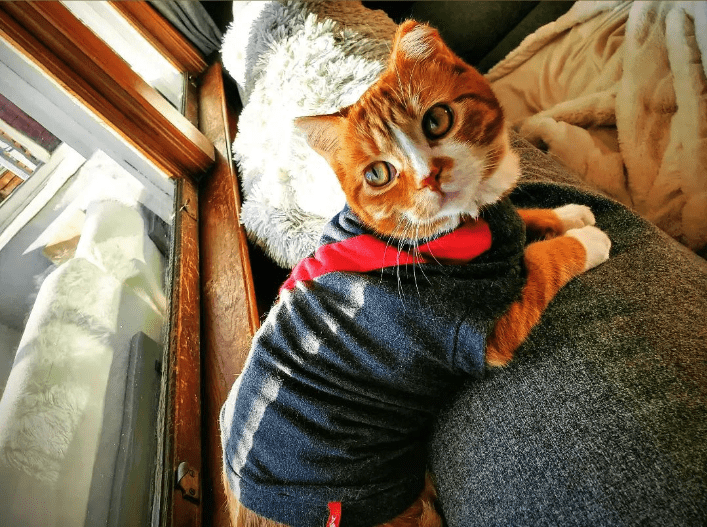 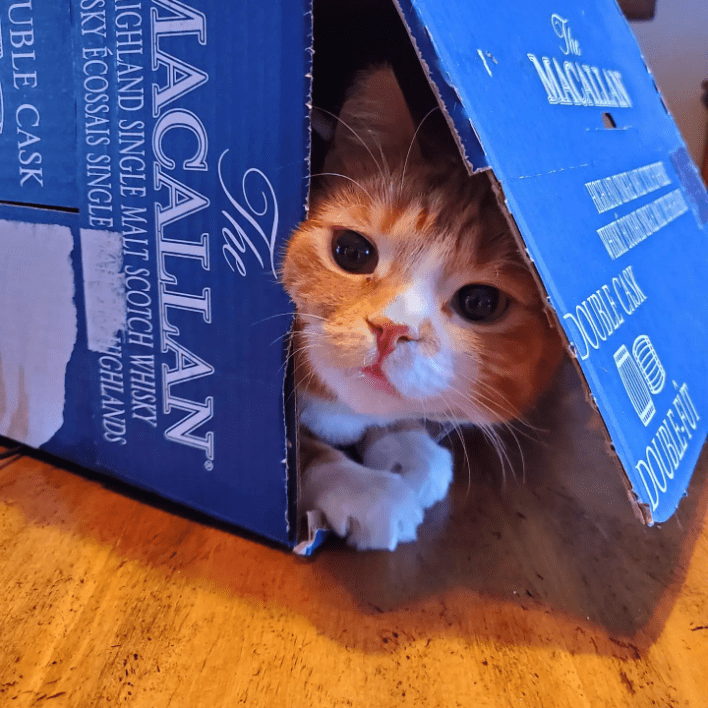 Can you tell me about how he started wearing sweaters? (Also, who makes them!)

Because of the level of injury he sustained and the number of surgeries he required, the majority of his body needed to be covered up. At first, he was in bandages and onesies so that he could not damage those wounded areas. As he grew he needed something bigger. Margaret found a great lady at Polocats.ca that was making Sphynx cat shirts and we started buying those. Eventually, he outgrew those as well. We reached out to her with his needs, and she created a pattern for his body and now he has his own tailor.  She even created his tux for the Calgary Humane Society Cocktails for their Critters event. Her generosity and care for Gus cannot be understated!

How is he doing today in terms of his recovery? (I know it’s been two years but thought to ask)

Gus is doing great. He gets around without issues other than not being able to jump as high as other cats. He will need lifelong monitoring to ensure he is pain-free and remains ruggedly handsome! 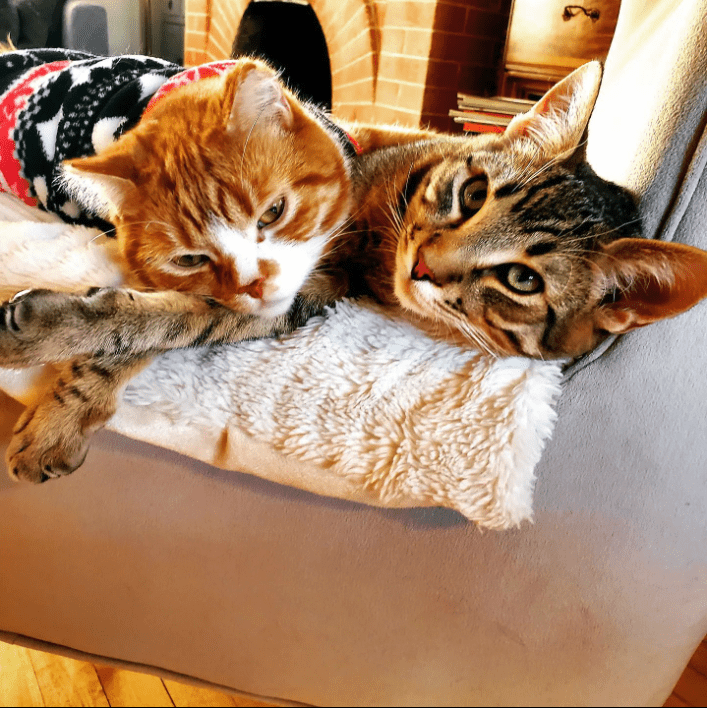 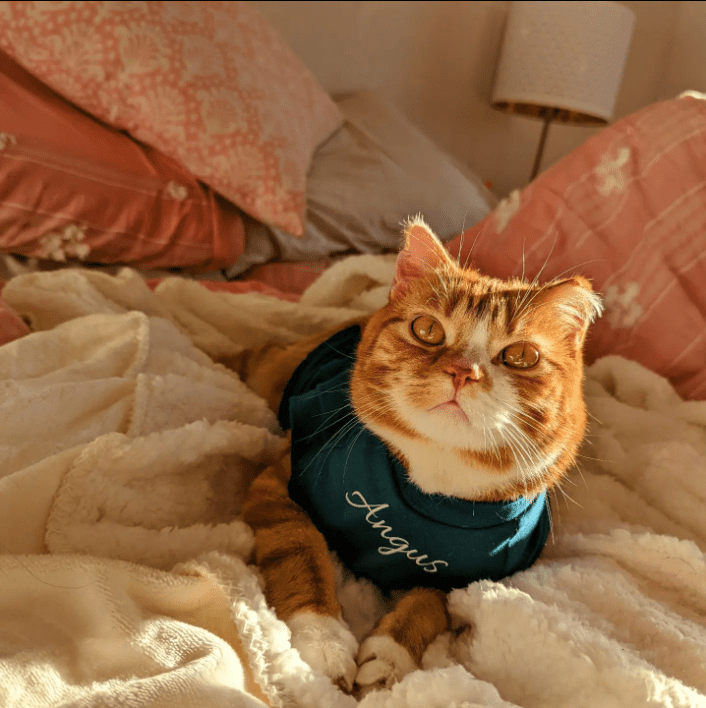 Mostly sleeping in whichever area of sunshine looks best with our other cat Oliver. Beyond that, he loves catnip and playing in tunnels and boxes. Despite all he has gone through he is a very social cat and likes to just be around people.

Angus lives with our dog Zuzu and his buddy Oliver the cat. Oliver was supposed to be a weekend visitor between a stay at the vet clinic and his new home but Angus had other ideas. With the work that Margaret does as a vet, we often have animals that come through the house that need a little extra care or a place to stay until they get to their new home. We have had many such animals… including a goat… and Gus welcomes them all. Oliver came home and Angus literally picked him to stay. The two became immediately inseparable and Gus would wander the house meowing for him when he couldn’t find him. 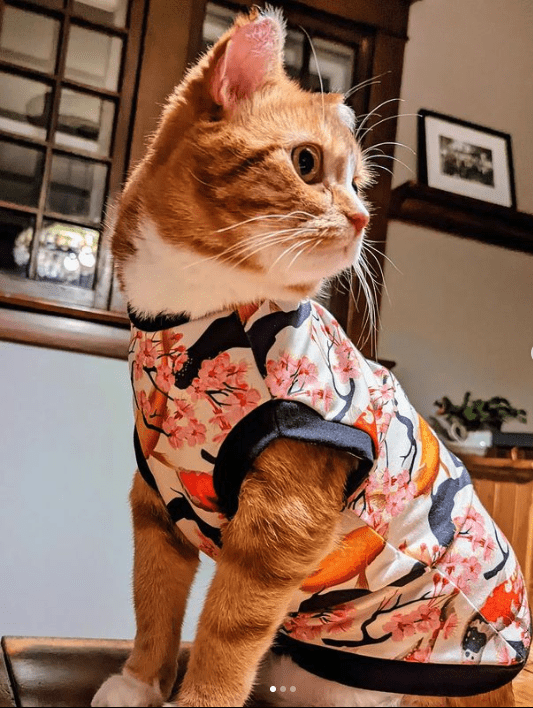 What’s something special you’d like for people to know about Angus?

Angus is a reminder for both of us that the work that we do is important not only for the animals but for the people around them. Animal abuse does not happen in a vacuum. If an animal is being injured in the home it is highly likely that the people are also being harmed or neglected as well. Coming home after a stressful or sad day to be met by him at the door takes a lot of the weight off. He meets us after work every day without fail. He is genuinely a happy cat and quite the character. What you see in photos is truly him. The expressions on his face and how he carries himself leave nothing to question, especially when his bowl is empty!

I want to give a special “thank you” to Dennis and Margaret for giving Angus a beautiful life full of love and the happy ending he deserves. Animal abuse is never okay, and while Angus got his happily ever after, so many other poor kitties don’t. For more on this precious kitty, be sure to check him out here on Instagram.