There’s no doubt that you’ve pet or at the very least seen an orange cat (also known as a ginger cat) at one point in your life. This is partially because orange cats are among the most popular coloring of cats that are used in movies and TV shows. And for good reason- orange cats are super playful and talkative. Some people consider orange cats to be some of the most friendly types of cats out there. 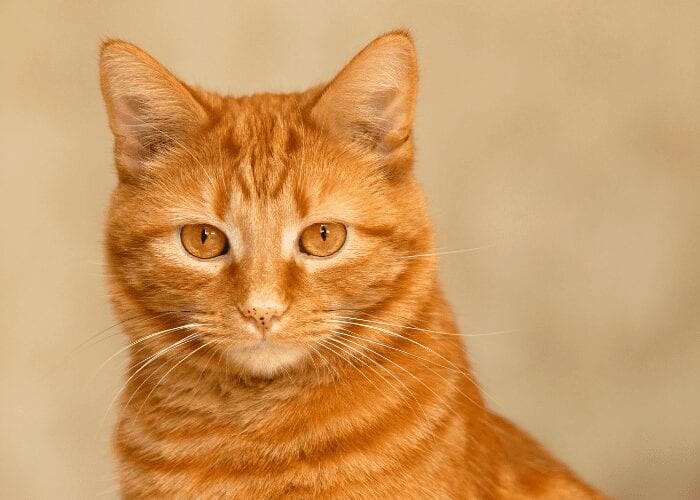 One unique fact about orange cats is that they are all tabbies. The term tabby actually refers to the pattern of a cat‘s coat– not its breed! Orange tabby cats, specifically, are striped with colors of orange and white. This brings us to the different variations in the tabby coat patterns. There are four different types of tabby coat patterns, which are all present in different breeds of orange cats! These four types are the classic tabby, the mackerel tabby, spotted tabby, and ticked tabby.

A classic tabby cat is a cat that has an agouti base coloring with darker swirls, spots, and lines of color on them. The term agouti derives from the gene that gives tabby cats their signature coat pattern– it essentially means a band of color on your cat. A classic orange tabby is a cat that has a cream/whitish base color with swirls, spots, and lines of the rich orange coloring. You may also notice that with classic orange tabby cats, there is a pattern that resembles the letter “M” on their foreheads. The picture below is an example of an orange classic tabby cat with the signature “M” tabby pattern on their forehead.

By now, hopefully you have a better understanding of just how different orange cats can look. Read on to find out why orange cats are in fact orange/red in color! Hint: It’s a really interesting gene they have! 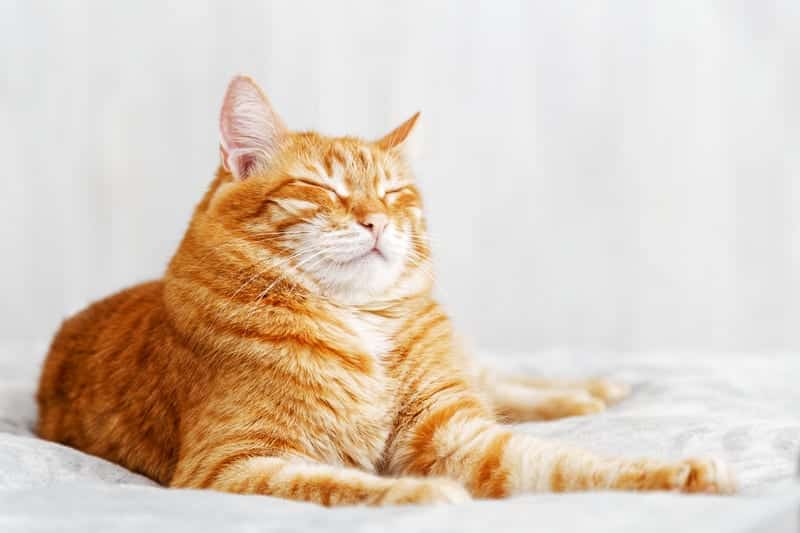 Why Are Orange Cats Orange?

Orange cats are really unique and special cats. It’s suggested that they’re amongst the most friendly and playful cats, and statistics even show that up to 80% of orange cats are males. So chances are, if you’ve got an orange cat, it’s a male cat (although it is entirely possible to have a female cat that has orange fur). Why is this, though? Why are they mostly male, and how do they get their signature orange color?

There is a wide range of the colors orange that orange cats can be. They can be more of a cream color, a dark, rich red-orange color, or right in the middle at a classic orange color. This is all due to a particular pigment that orange cats have which is called pheomelanin. The more pigment that is present in the cat, the more “red” the cat will appear!

This directly correlates to why most of the orange cat population is male. The pheomelanin that orange cats possess is found on the X chromosome. Male cats only need one copy of that chromosome in order to be colored orange, because male cat chromosomes are XY. Female cats, on the other hand, would need two copies of the chromosome, because their genetic makeup calls for an XX variation in order to be a female. Thus, it is far more likely for an orange cat to be male, just because of their chromosomal makeup!

Phew! That was a mouthful. Now we’ll dive into the world of orange cats and different orange cat breeds.

Abyssinian cats have a tickled coat pattern with a long, muscular body. They also have relatively thin tails, large ears, and almond shaped eyes. These cats come in many colorways, including orange/red, blue, fawn, and cinnamon. Their shorter coats allow for their grooming need to be kept lower. They’re also incredibly social creatures, making a great option for those who work from home, have kids, or have time to spend with the cat.

The appearance of the Exotic Shorthair cat is a mix between Persians as well as American Shorthairs. They have large, oval-shaped heads with full cheeks. Their ears are smaller in size and round, matching the shape of their heads. Exotic Shorthair eyes are large and round as well, resembling that of a Persian. There are many colors that exotic shorthairs can be, including white, blue, lilac, black, and orange/red. Exotic Shorthair cats are fairly low maintenance, requiring only the occasional grooming and feeding of course. These cats are great for people who spend a lot of time working or who can not devote multiple hours a day to a cat. 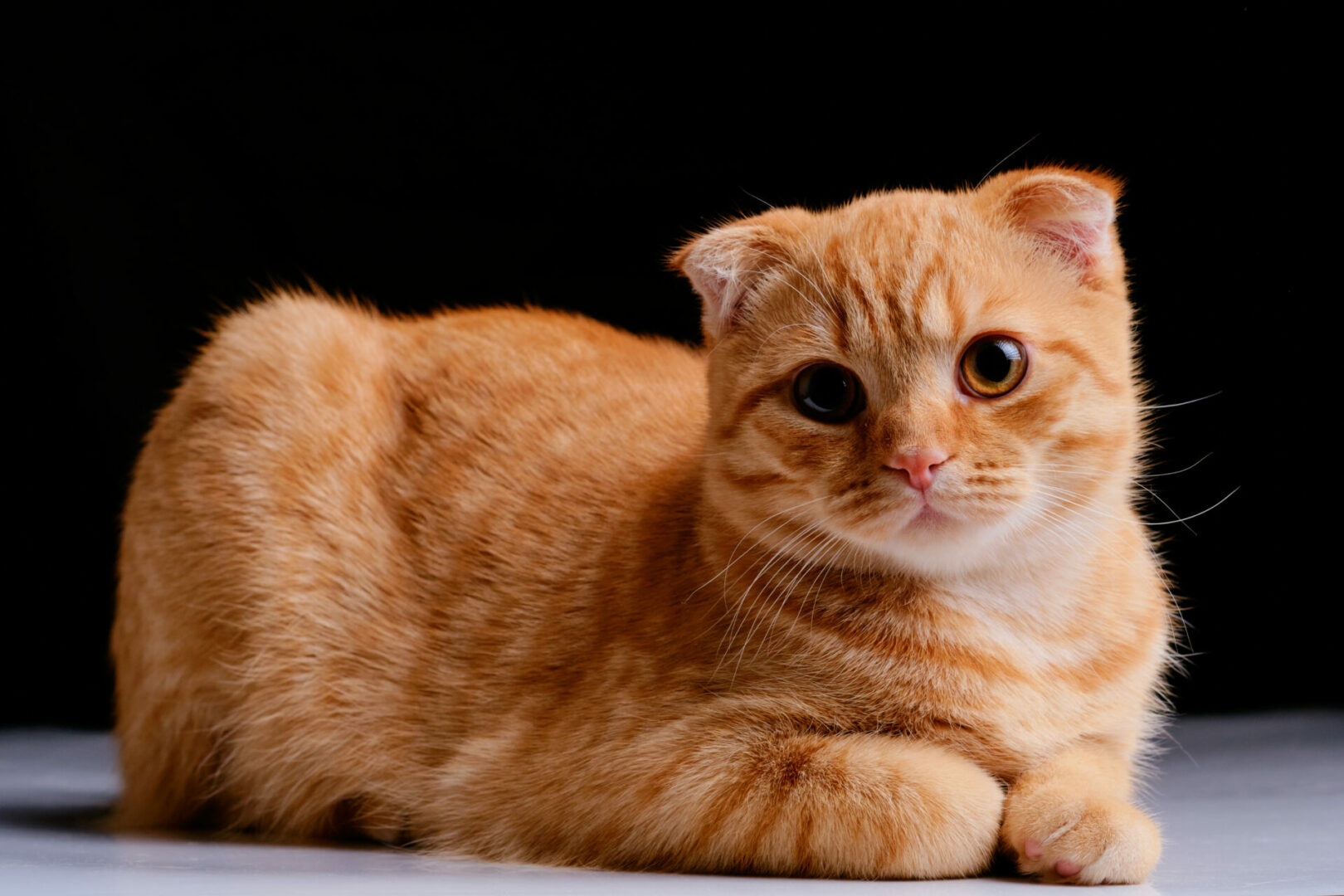 The Scottish fold was believed to first be spotted by a gentleman named William Ross, on a rural farm in Scotland. After gaining permission from the original owners, Ross was able to have one of the kittens and breed them with one of his own barn cats. The interesting thing about the kitten is that she had ears that weren’t standing up; instead, they were folded. After breeding her with his barn cats, generations of this new, folded-ear kitten started to be noticed by the masses.

Scottish Folds are even more unique in that there is only a chance, not a guarantee, that their ears will be folded. When a Scottish fold is born, its ears are straight up. It takes a few weeks time to tell whether or not their ears will either remain straight or fold over. It is because of this why Scottish folds are so rare and sought after. Besides their ears, they have a medium build and shorter legs and tails. They are very laid back cats and get along well with other animals. There are many different colors that Scottish Folds can be, including white, black, silver, blue, brown, cameo, cream, and orange.

The Persian Cat is another breed that is one of the oldest in the world. According to the Persian Breed Council, there is evidence of the Persian dating back nearly 4,000 years ago. They became more popular in the 1800s when traveling diplomats brought kittens home to their families after being in places like Persia (which is now Iran). Their name purely represents their origin. They became even more popular around the late 1800s and early 1900s when cat shows started having a desire for longhaired cats (which Persians fit purrfectly!).

The most physically notable feature of a Persian cat is its cute, squished face. They have smaller heads, round ears, and big chubby cheeks. They are medium in size and have long hair that requires regular grooming and washing. Persians love attention but do not always require it of their owners. Their fur can be different colors such as white, blue, black, brown, cream, and red/orange.

The Munchkin cat’s history is very short, dating back to only 1983. One afternoon, a lady saw two cats run under a truck after being chased by a dog and discovered that they both had abnormally short legs. She kept one of the cats and soon discovered she was pregnant after the cat gave birth to four kittens. Two of the kittens had short legs, one of which was given to Kay LaFrance, who later created the standard for the Munchkin cat.

The name “Munchkin” in Munchkin cat is derived from its short, little legs. Breeders tried to recreate the munchkin by breeding them, however, noticed that it didn’t always result in short legs. A Munchkin Cat’s short legs can ultimately be attributed to a random, genetic mutation. The other physical characteristics of the munchkin cat are normally proportionate to that of a common housecat. Munchkin cats can vary in color to pretty much any color imaginable, including a rich orange color or lighter orange color. They are very playful animals who love attention but unfortunately may have health complications due to how short their legs are. 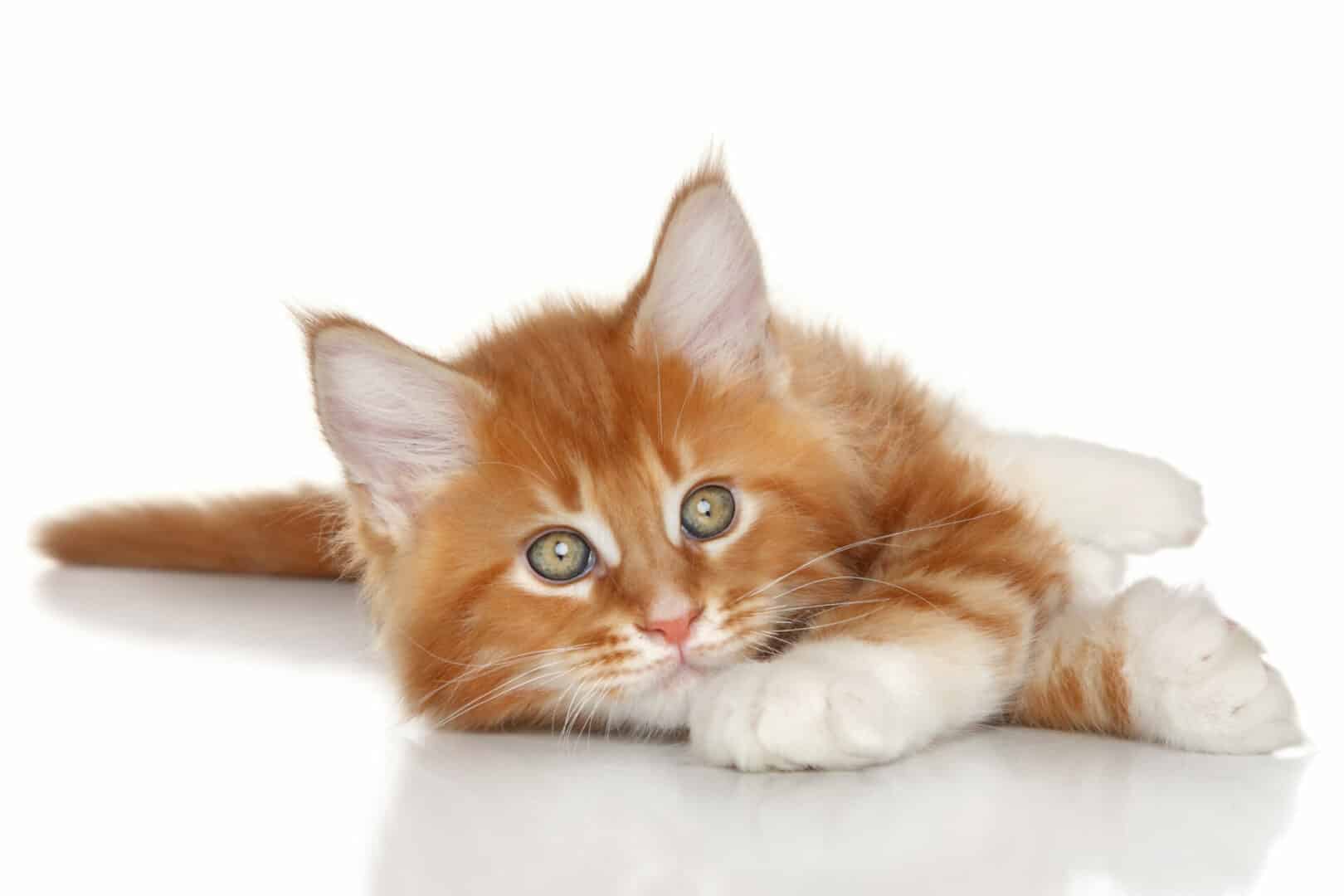 The Maine Coon is undoubtedly one of the largest breeds of cats existing today. Smaller Maine Coons can still even weigh up to 9 pounds! They have a lot of long, thick fur that requires very regular upkeep, and they are not shy about shedding. Because of their fur, they are robust animals that can withstand harsh winter climates. They like to play but aren’t overly needy, so they make great pets for any type of family. They can be found in many colorways, including the most popular colors of blue, black, white, and cream. However, there are Maine Coons that are orange too!

American Shorthair cats are muscular cats,  due to the fact that they were originally used to hunt mice. They have more broad chests and very strong legs/jaws. Their fur is of course short, which makes it easy to manage. There are more than 80 recognized colors that an American Shorthair can be, and of course, orange is one of the more common colors!

The Bengal Cat doesn’t have a specific place as to where it originates from. Some of the first sightings and reports of the Bengal are noted as being a result of breeding an Asian Leopard cat with an Egyptian Maus in the late 1800s. In 1924, there was a Belgian scientific journal that briefly discussed a cat breed now known as the Bengal. Finally, as of 2016, the Cat Fanciers’ Association officially recognized the Bengal as a breed.

Bengals are known for their classic spotted appearance. They are larger than normal housecats because of how muscular they are known to be. In general, they are low maintenance cats that don’t require a lot of upkeep. There aren’t many color combinations that Bengals have, just because of their unique spotting. Cashmere and rosette are amongst the most common colors, while orange is less common in Bengal cats.

The Devon Rex is an adorable little cat that is thought to have originated from a natural and random genetic mutation. It is a relatively new breed of cat, with origins starting in the 1950s. Since then, the Devon Rex has been bred over and over in order to prevent the mutation from going away.

Devon Rex cats are some of the most unique looking cats out there. The first thing you’ll probably notice about them is that they have curly hair instead of straight. This, paired with a small head, large ears, and large eyes makes for a very cute cat that is almost unlike any seen before. The Cat Fanciers’ Association reports that a wide variety of colors and coat patterns is possible for this cat, including orange tabby as one of them. 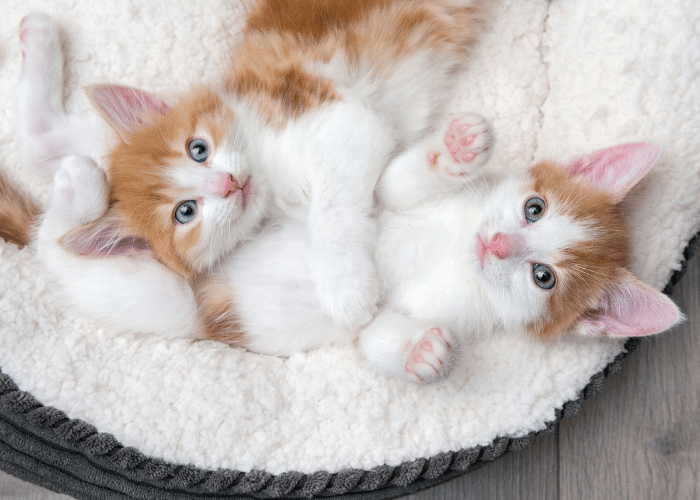 We hope you had fun exploring the world of orange cats! There are so many breeds, personalities, and coat patterns that orange cats can be, so there is sure to be an orange cat out there for everyone. Have a purrfect day!