The Touching Rescue Story Of Milton Longcat Will Warm Your Heart

If it weren’t for those with hearts for cats in need, many cats in shelters or out on the streets wouldn’t get a chance to find the happy ending that they deserve. Milton Longcat is a lovely Siamese kitty who did not have an easy start at life. But thankfully for sweet Milton, he had fate on his side in the form of a kind-hearted couple that dedicate much of their time to helping cats in need.

Milton’s cat dad, Dan, reached out to me to share his cat’s story, and it really touched my heart. Something tells me that you’ll enjoy it, too, once you read it. Dan allowed me to share Milton’s happily ever after story, so grab yourself a tissue and keep reading. I promise it will make you smile, and you will likely feel a connection to the story if you have a heart for homeless cats. 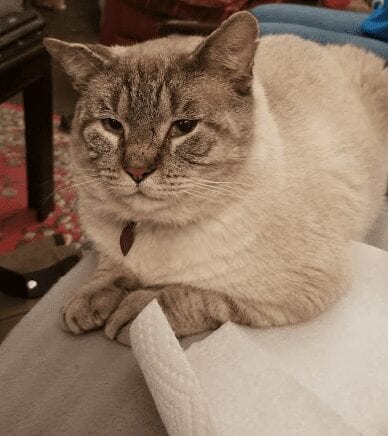 Milton’s story as told by his loving owner, Dan:

My wife and I volunteer at a local animal shelter. We decided that we would give a try at fostering a cat for them; we already had 5 of our own but figured one more wouldn’t hurt. We did the training and offered our services,  and about a week later the foster coordinator asked if we would  be interested in doing a medical foster.

Milton is a beautiful lynx point Siamese. Before he was turned in to the shelter he had been hit by a car, mauled by a large animal,  and shot with a BB gun. When he got to the shelter he was found to be about 7 years old,  FIV+ and had heartworm and mycoplasma. The poor guy had had a rough time. 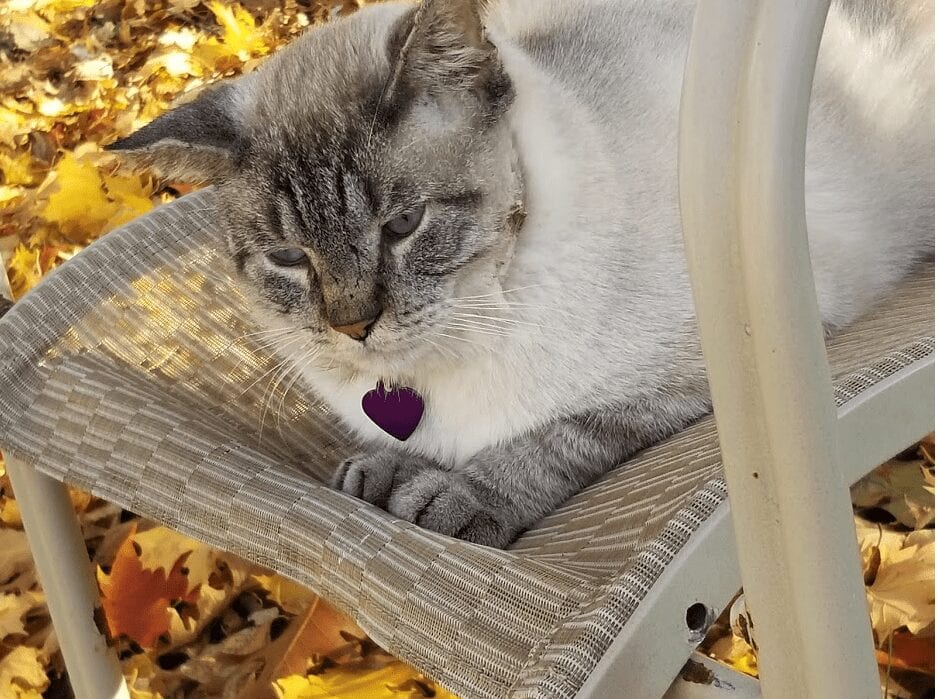 We immediately said yes; our shelter has very active FIV+ and FeLV+ adoption programs and had educated us on FIV.

We brought Milton and set up his safe room in my office. From the moment we opened his carrier Milton was an absolute sweetheart. His first action when he was turned loose in my office was to head-butt my hands, and he purred like a freight train when I petted him.

It took only a couple days for Milton to figure out how to open the safe room door. We learned about this as we sat in the living room reading. We heard Milton’s distinctive meezer meow coming down the hallway. I got up to put him back in the office,  but before I got to him our 17 and 18 year old senior citizens. Ranger and Sammy, had joined a sniff-fest with Milton and were remaining peaceful.  We decided to let Milton explore more. He wandered through the whole house singing loudly. When he encountered either of our girl cats and got hissed at (Benni is kind of timid, and Francesca is just sort of bitchy to everyone) his song would change. It sounded like he was saying “Hey, why the hiss? We’re buddies! We love each other!”, then he would walk on and revert to his regular song.

But the greatest surprise was how he interacted with Fred, our 2 year old former stray. 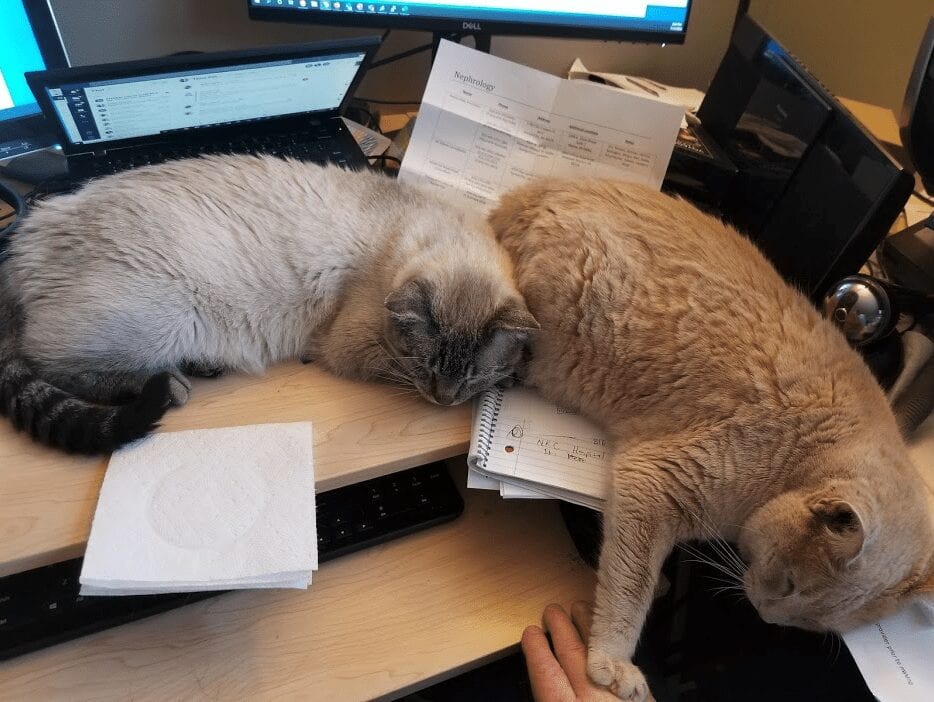 Fred is EXTREMELY timid (he had been dumped before 1 year of age and had lived at least a year on the street) and afraid of everyone,  but he and Milton became instant best friends. I often hear what sounds like a herd of wildebeest thundering down the hallway, but it’s Milton and Fred racing down the hall and leaping over each other.

Within a couple days of coming to us Milton developed an abscess on his left front paw. Treating that and his mycoplasma required weekly trips to the shelter vet clinic. Before his first trip my wife made Milton his own harness/walking jacket (a beautiful blue to match Milton’s eyes,). Milton was quite proud to wear his jacket, and would stroll in to the clinic as if he owned the place. Every time he came in the staff would all fawn over him, and he loved it.

We maintained the image of being Milton’s foster family for 2 or 3 weeks,  then we had to adopt him. We couldn’t deal with the thought of giving him up. He now sleeps on the bed with us (often curling up on my pillow or my head) and is a wonderfully affectionate member of the family.  He has a tendency to develop abscesses (I assume as an effect of his FIV) but is so far pretty healthy.

We are absolutely determined to give Milton (along with the rest of our cats and dog) the absolutely best life possible. 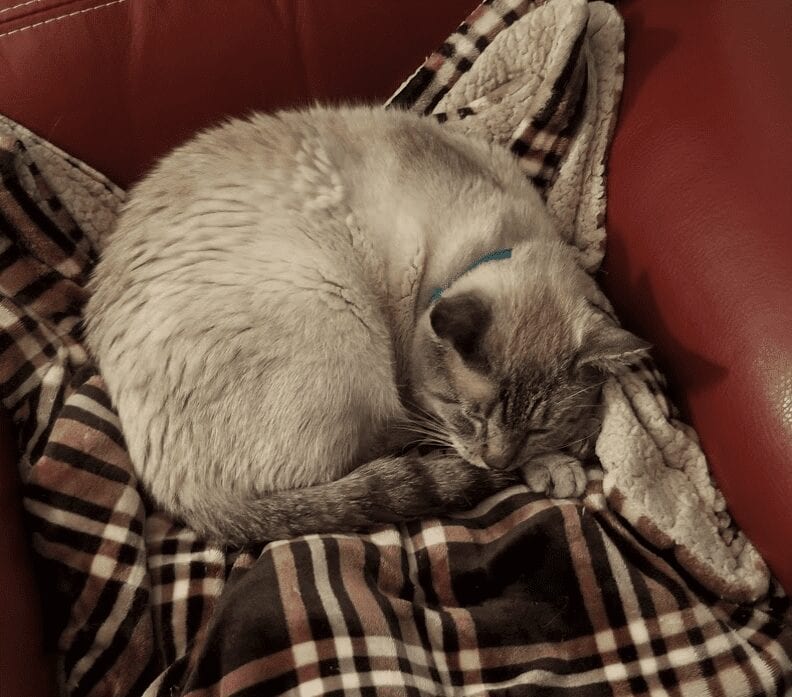 I’d like to give a special “thank you” to both Dan and his wife, Nancy, for allowing me to share Milton’s story, and also for all the hard work they do for our feline friends. The world is certainly a better place for cats because of earth angels like them.

If you know someone who would enjoy reading about Milton’s heartwarming tale, don’t forget to share this story with them. The world can certainly use some more feel good stories like Milton’s. 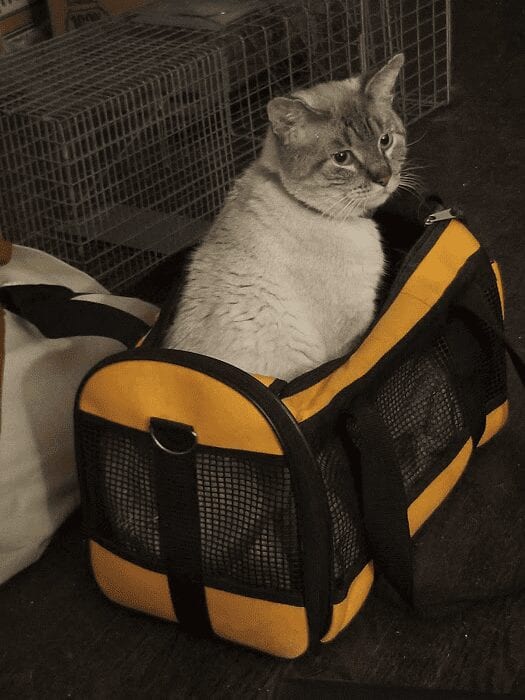 5 Tips For Establishing Trust With A Cat

What Is The Best Way To Hold A Cat?