When I was in the third grade, I got a rescue cat from my mom’s coworker because she could no longer keep him. He was big, friendly, and followed me everywhere I went. From the time I was in third grade all the way to my senior year, Pookie was my shadow. Some cats just need to be with their humans wherever they go, and Pluto, a handsome tuxedo cat, is no different.

For Pluto, also known on the internet as That Cat Pluto, he’s become something of a local celebrity in Colorado where he lives. He goes on daily adventures with his humans, and he loves every minute of it and all the attention that he gets. From hikes to swims, Pluto is there and ready to bask in the glory of the great outdoors.

I caught up with his cat mom, Satya, hoping to feature this adventurous feline, and thankfully she agreed. So, keep reading to learn all about one cat who got a second chance and is using it to live his best life. 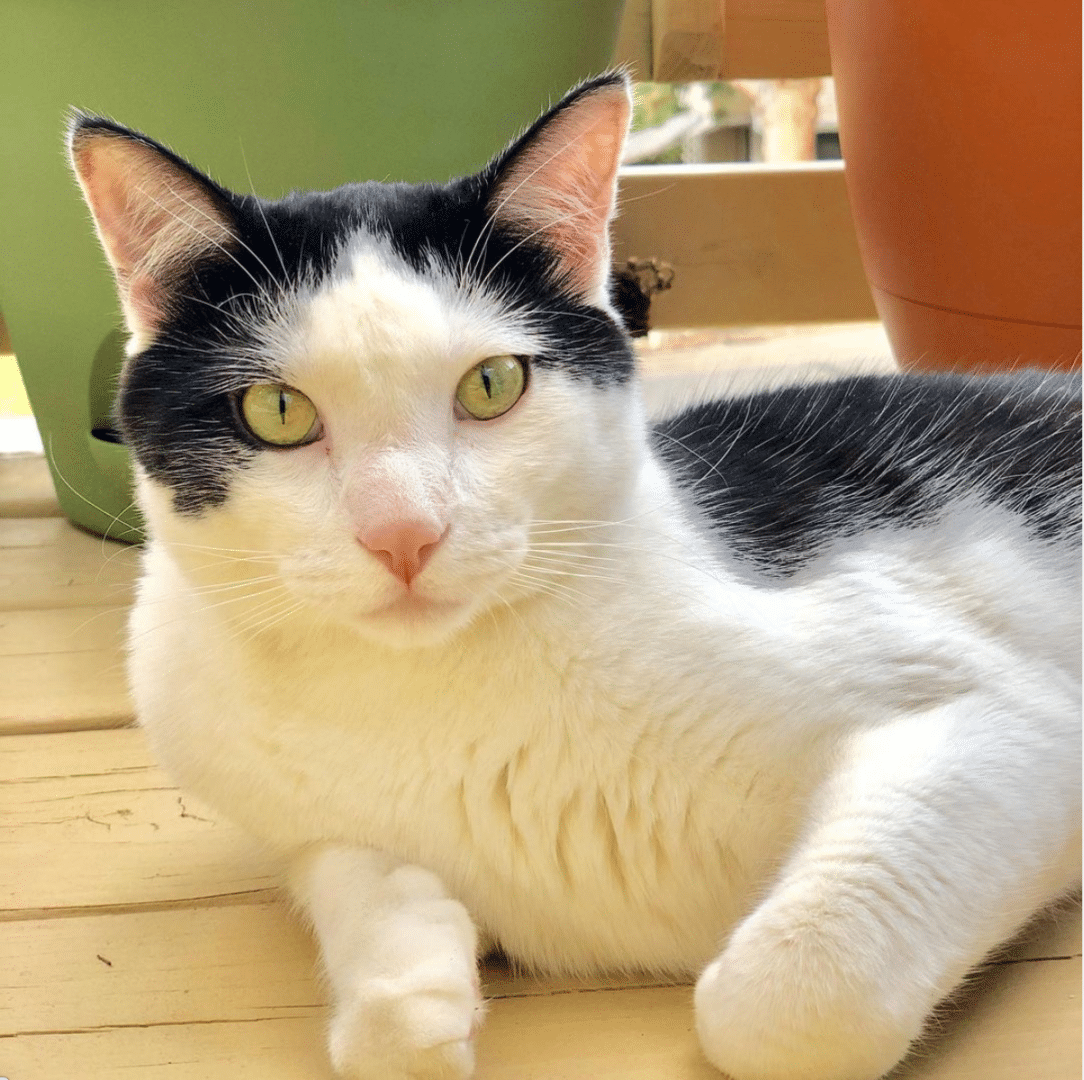 How did Pluto come into your life?

I got Pluto from my sister. I was supposed to take him to a shelter b/c she couldn’t keep him. (He was a bit of a wild kitty!) I stayed so late at my sister’s house that I could not drop him off. He ended up settling himself in and getting comfortable. I did try rehoming him but couldn’t find anyone to take him when I told them some of the challenges he was having when I first got him. I ended up keeping him and from what I can tell he has been very happy with that! 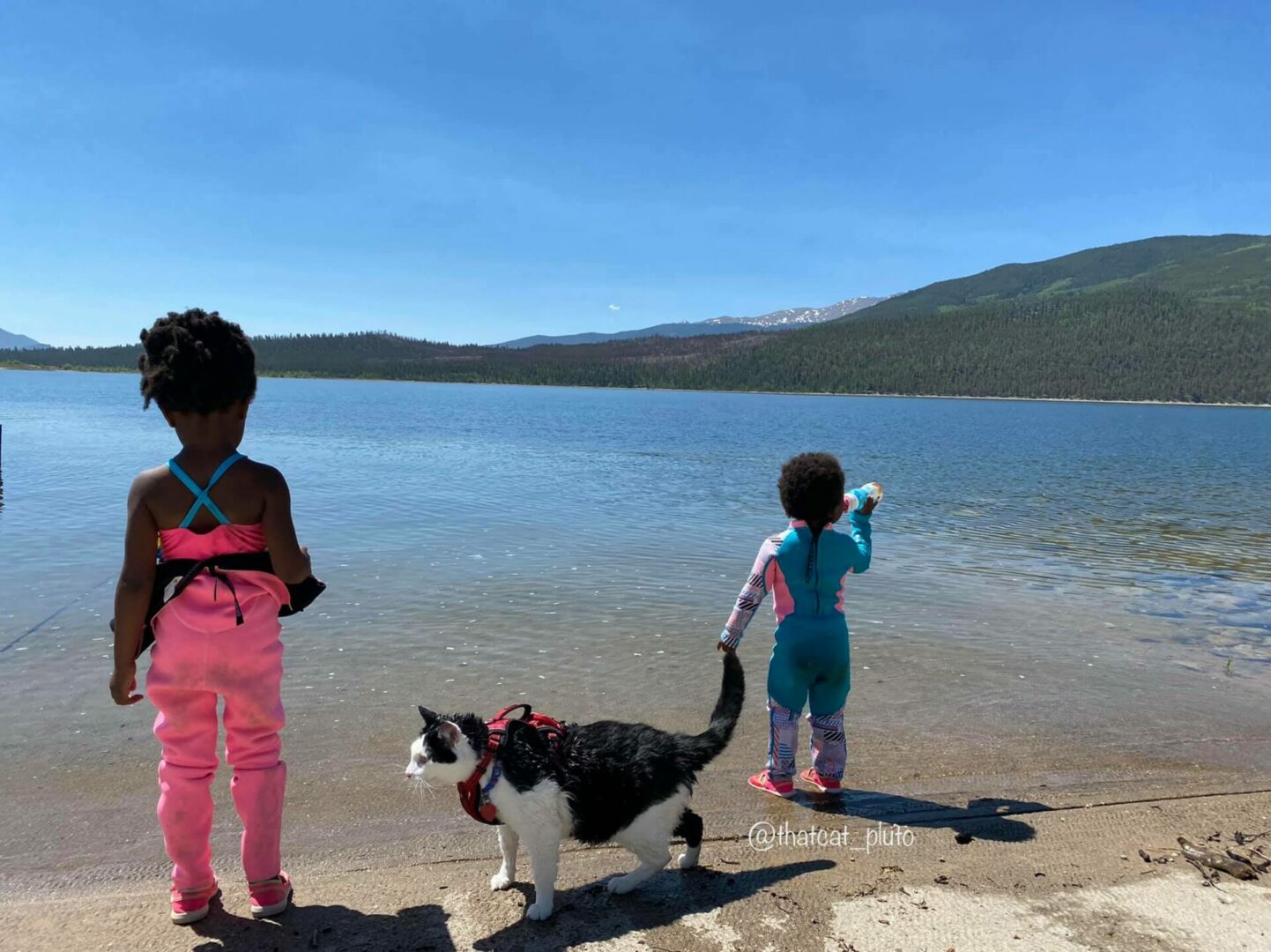 How did you discover that Pluto loved the great outdoors?

He was always going outdoors even when my sister had him, maybe before that. When I met him for the first time, he was coming in from being outside and greeted me. When I took him in, I continued to let him go outside at our home. When I first got Pluto, I had a dog, and my roommate also had a dog. I would walk the dogs and carry Pluto in a giant purse to the park. When we got to the park, I would let him out of the purse near the lake so he could roam around. 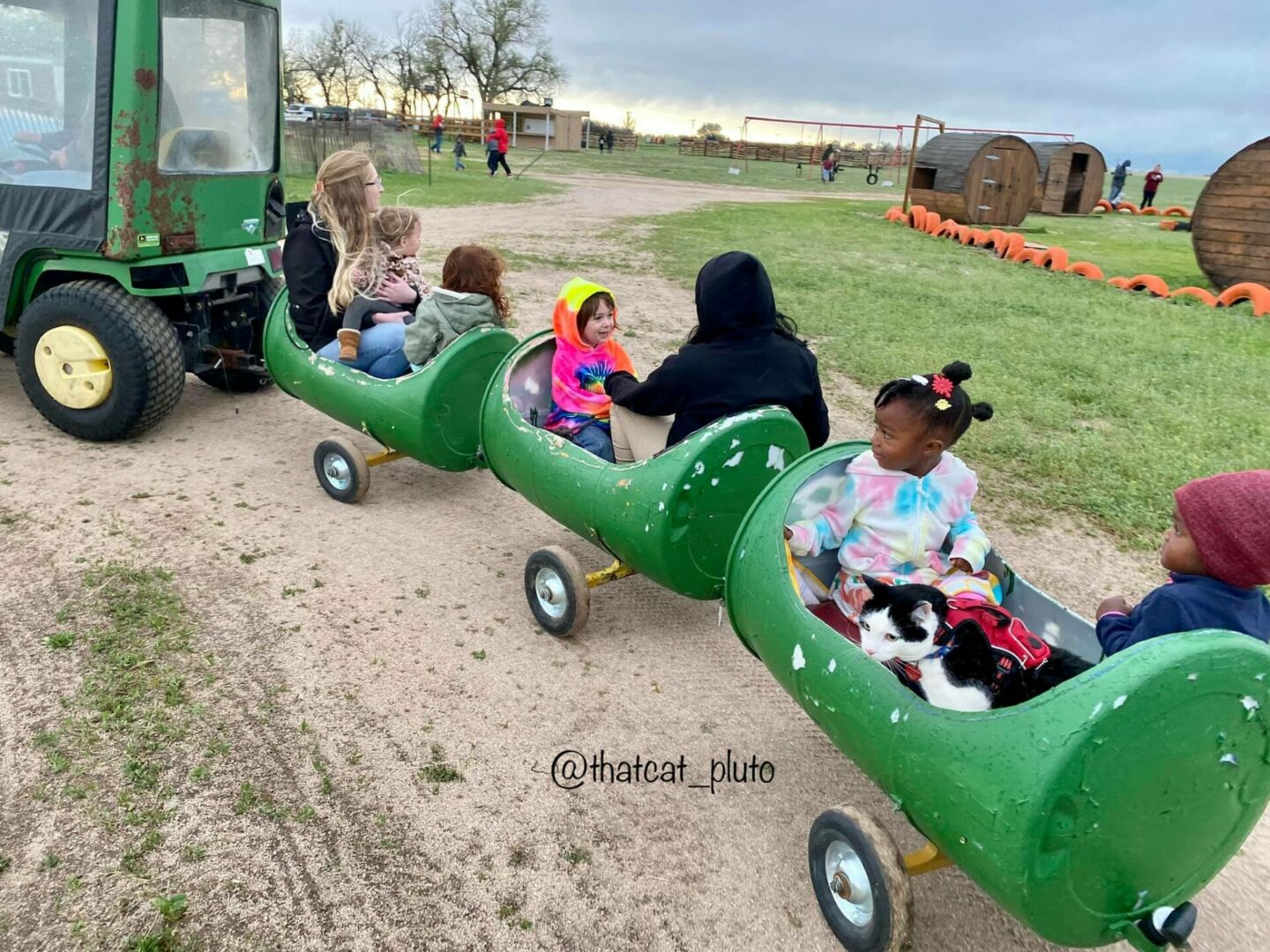 How do people react to seeing Pluto when you’re out exploring?

When people see us out exploring, they are usually surprised to see a cat. Sometimes he’s in the wagon and he has his little head poking out, taking everything in. Other times, he’s walking with us. They are very surprised. Even more so when they see him walking with us down the trails or on the kayak. Or anywhere near water for that matter. They often have loud whispered discussions about whether they are really seeing a cat, and I laugh and let them know that yes, he is a cat. And Eva occasionally shouts out “He’s our brother!” 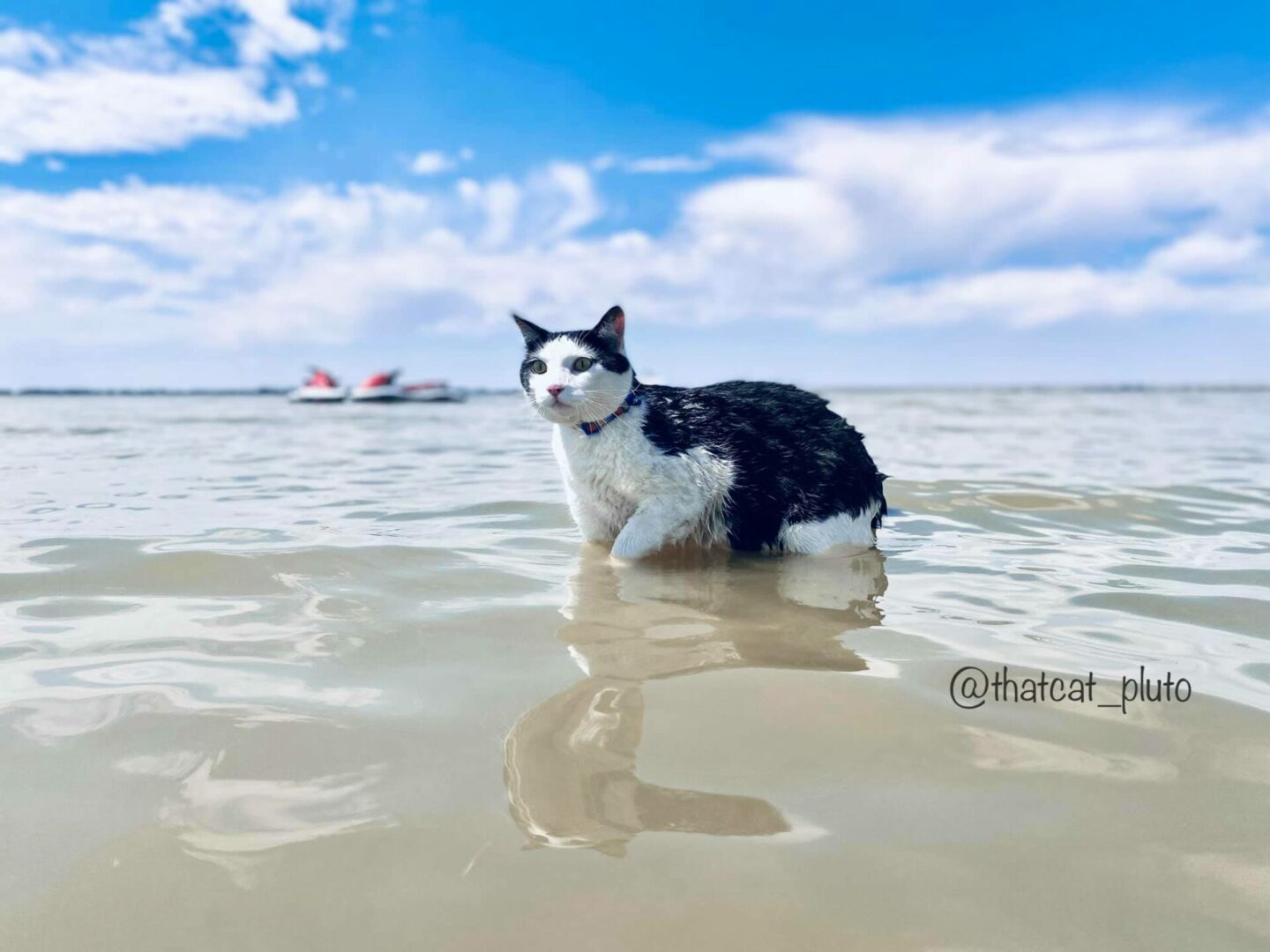 Pluto is a pretty chill cat now! He was not so much when I first got him. He really enjoys going on adventures and seeing new things. He’s curious and likes to investigate, especially on trails. If I let him, he will take forever on a short walk because he wants to stop and sniff everything! He is very tolerant! Between having two toddler human sisters and trying so many new activities when we are out on adventures, he puts up with a lot from us. I never would have thought I’d be doing so much with him.

He’s also very family-oriented and loves deeply. When my dog died, he was so sad. He was depressed for over a month. I had to give him a lot of extra hugs and let him know that everything was going to be okay. 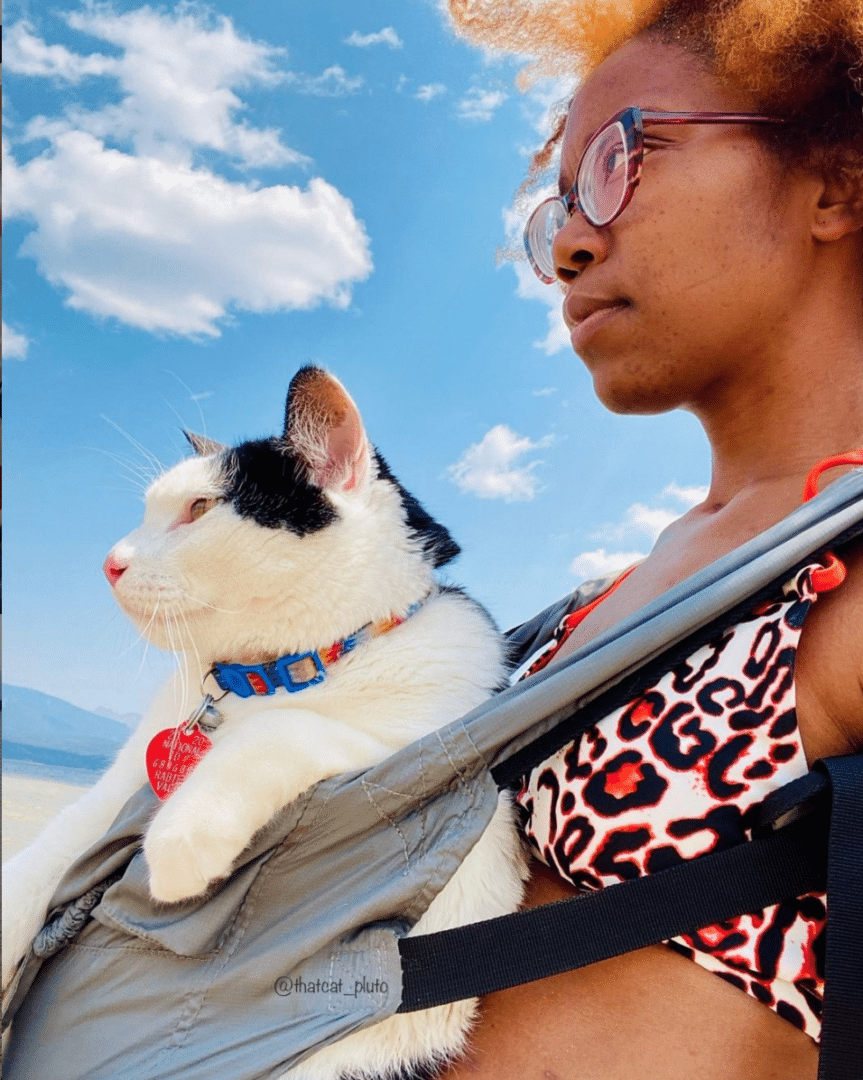 Pluto is very affectionate and enjoys cuddling. When we must leave him at home, he greets us at the door when we get back. Sometimes he’ll be staring from the patio windows and then he gets to the front door by the time I am opening it up. He loves his sisters. He checks on them when they are sad. When my youngest would cry as a baby, he would go and lay next to her and start purring to try and comfort her. He rubs all up on them and everything in their room to remind them how much he loves them. But he is still a cat and he likes to play cat games! When I work out, he comes and interrupts me, climbs on me while I do sit ups, attacks my ankles while I do squats and calf raises. All the feline things! 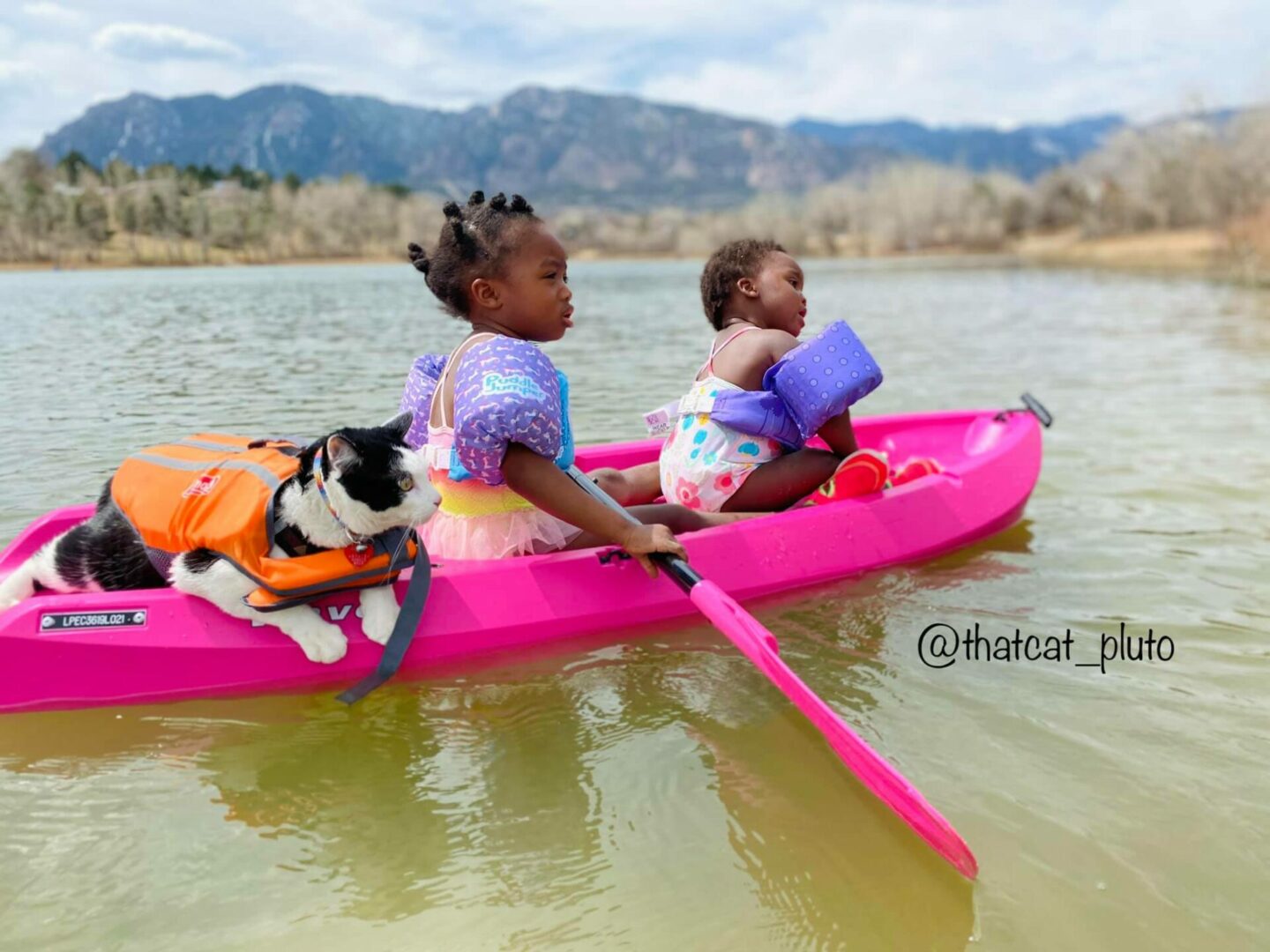 What are some of Pluto’s favorite hobbies?

A good chunk of Pluto’s hobbies is typical cat stuff -sleeping and eating! (He’s 20 pounds!) But as most people will see from our photos and video, he loves being with us and going on adventures. He likes to be outside a lot. We all do. Some days, even at home, we will stay outside for five hours playing and lounging around. He also likes to roam a little bit visiting neighbors’ patios, people watch from bushes, and then he comes back and hangs out while we play.

Pluto’s two favorite toys are his electronic fish that flops back and forth, and the laser. He also still likes to play fight, but I try to keep that to a minimum because the girls are so young, and I don’t want him thinking he can do that with them. Late at night, I let him get it out from time to time with me. He likes that a lot!

Oh, wait there’s more!  He absolutely loves to eat grass and plants! I don’t keep plants in the house because he will eat them all. Like destroy them to nothing but dirt! When hiking, he is constantly trying different grasses and of course, puking them up later! 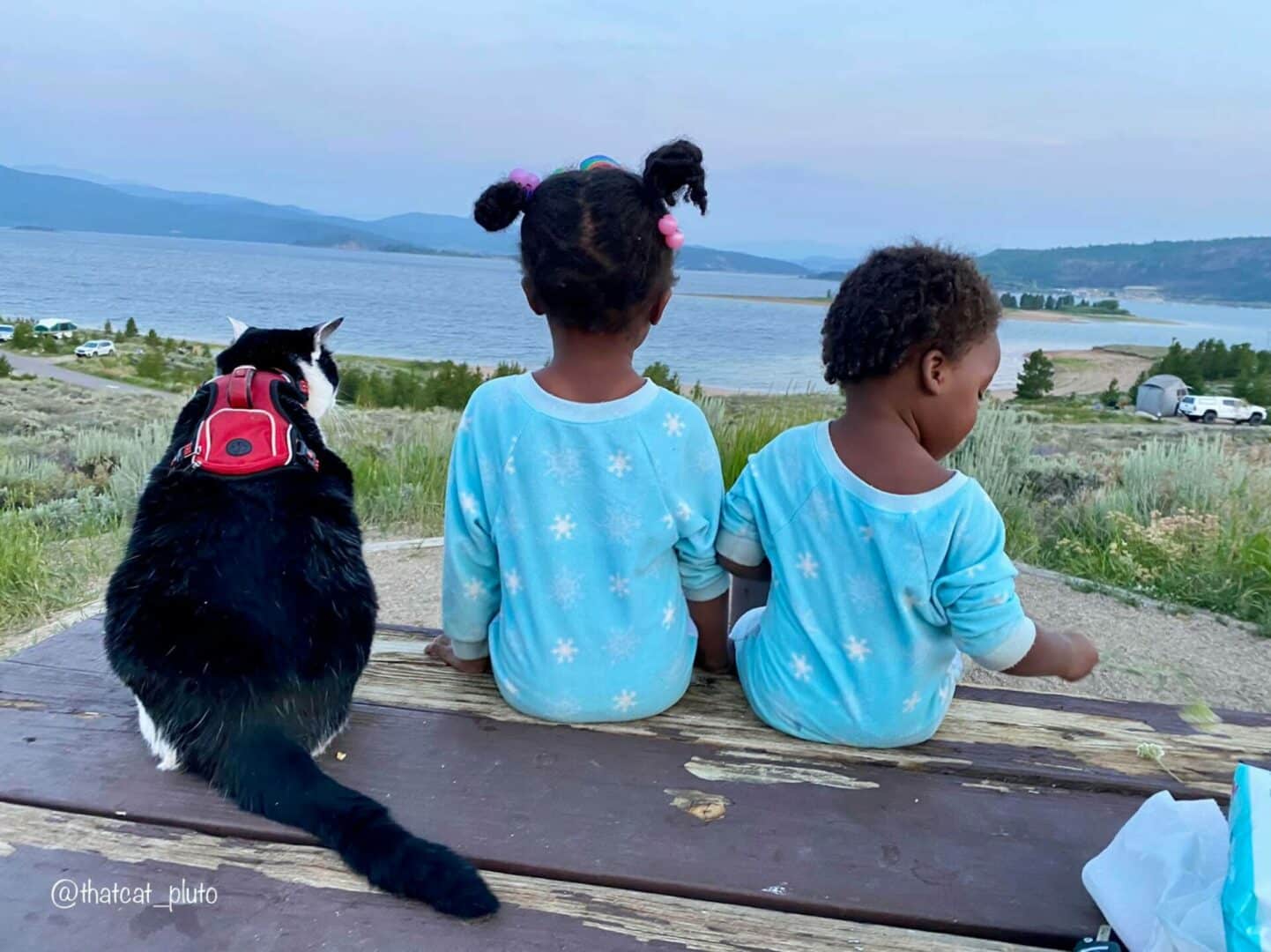 What’s something special you’d like people to know about Pluto?

Something special I’d like people to know about Pluto is that HE IS THE BEST CAT EVER! I’m very happy that things worked out the way they did and that he became my kitty son. Oh yeah, he likes oatmeal, which I find very weird!  If I make it for the girls, I try to remember to give him a little bit otherwise he is going after them for theirs.

Can’t get enough of this cool adventure cat? Follow him on Facebook and Instagram to see where he and his humans will go next! I’d like to give a special “thank you” to Pluto’s cat mom, Satya, for allowing me to share his story and photos with all of the Cattitude Daily readers. It’s nice to know that Pluto got the second chance he deserved and has people in his life that simply adore him. Here’s to many more adventures for Pluto and his beautiful family. 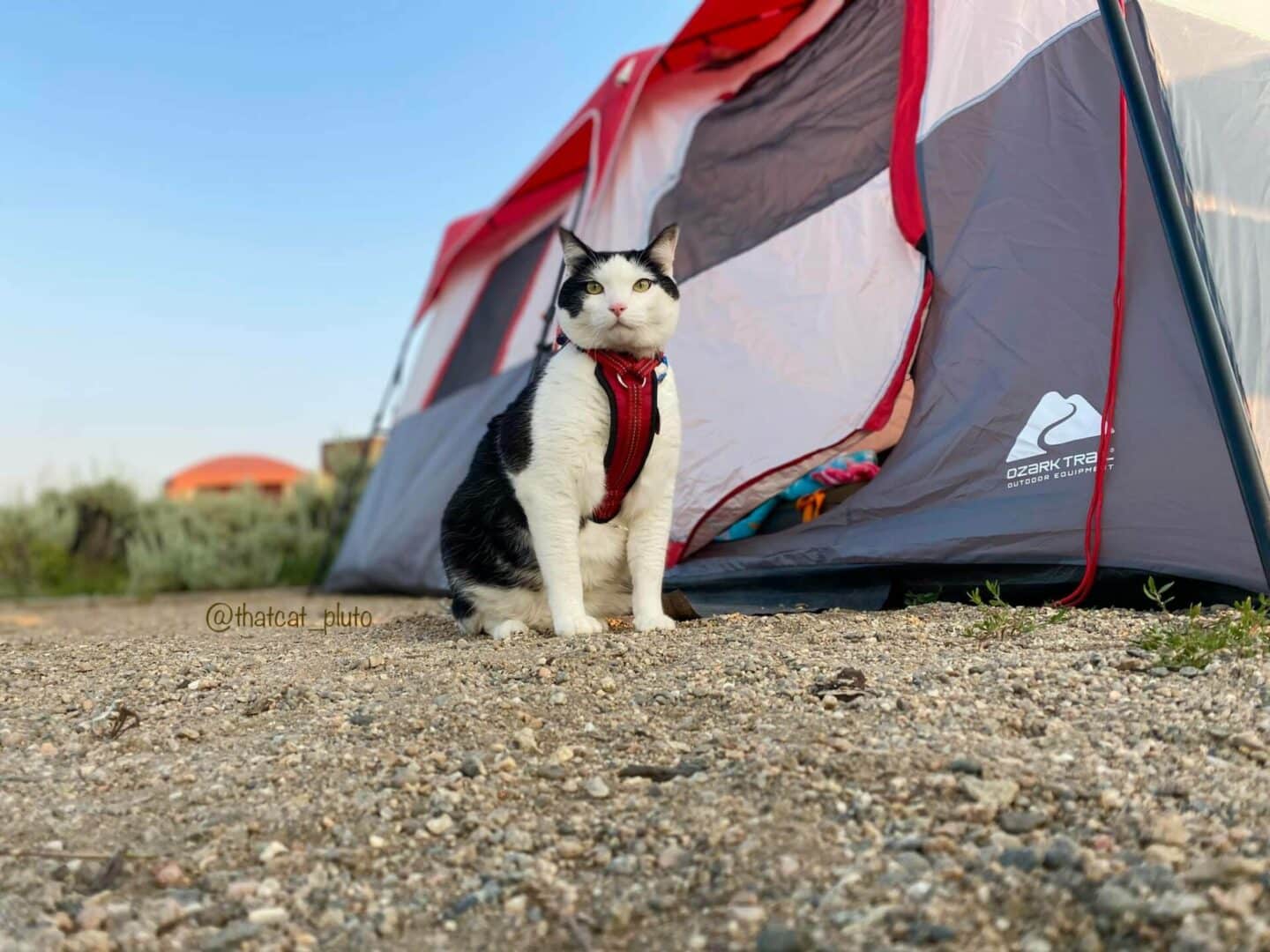 All Images Courtesy of Satya Wimbish – That Cat Pluto on Facebook

Why Do Cats Have Whiskers?

Feline 411: All About The Ocicat