If you’re reading this, then you love cats. And the incredible thing about cats is, each and every one of them is truly unique. So much so, that even a tabby cats stripes and swirls are like a fingerprint—no two can ever be truly identical. For Mindy the tuxedo cat, she’s a certified head-turner.

She’s got pretty green eyes, majestic floof, and oh does she know how to work it for the camera. But as lovely and sophisticated as she is, she was plucked from a shelter by her humans and her start at life was anything less than glamorous. I caught up with her cat mom and dad to learn all about this gorgeous gal so that I could share her story with the Cattitude Daily readers…. 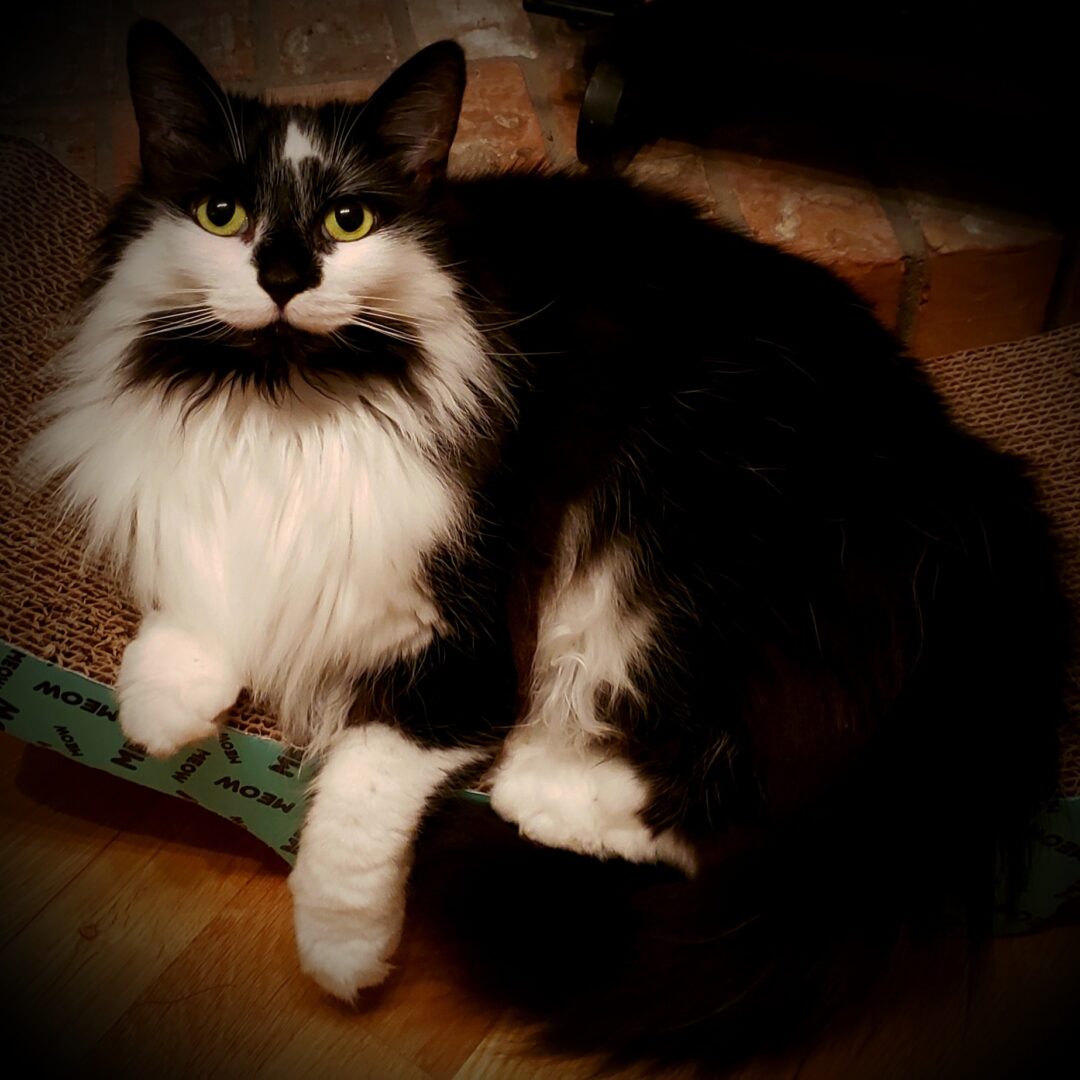 How did Mindy come into your life?

Mindy was adopted at 3 months old from the BCSPCA in Abbotsford, BC, Canada. They advised me that she was brought into the shelter by a local turkey farmer, along with her brothers and sisters and was covered in mud.

How did Mindy get her name?

No fancy story behind her name, she was already named Mindy when we adopted her from the BCSPCA and it seemed to fit her perfectly. 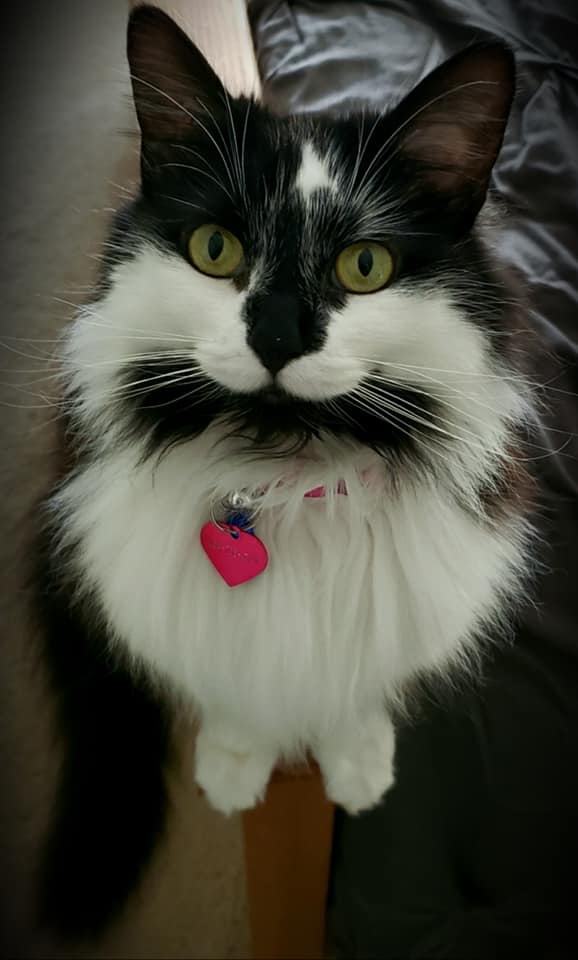 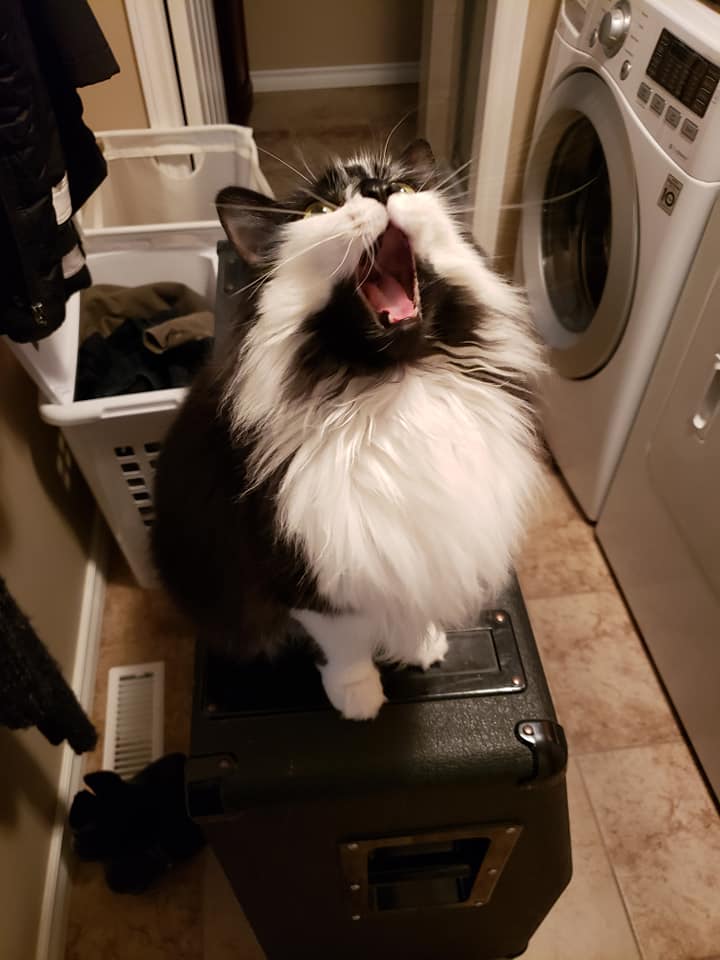 Mindy is a token tuxedo. She is extremely brave but yet scared of everything. She is the Queen of the household. She has the ability to balance on a thread if she could with the assistance of her extremely long tail. She also has an usual gait which at times resembles the walk of a runway model.

She has a slightly older non-biological sister named Belle. They are 6 months apart. They were adopted within 24 hours of each other and have basically grown up together. They tolerate each other but are not besties. Belle has yet to find the courage to challenge Mindy’s self-appointed crown of being the Queen of the house. 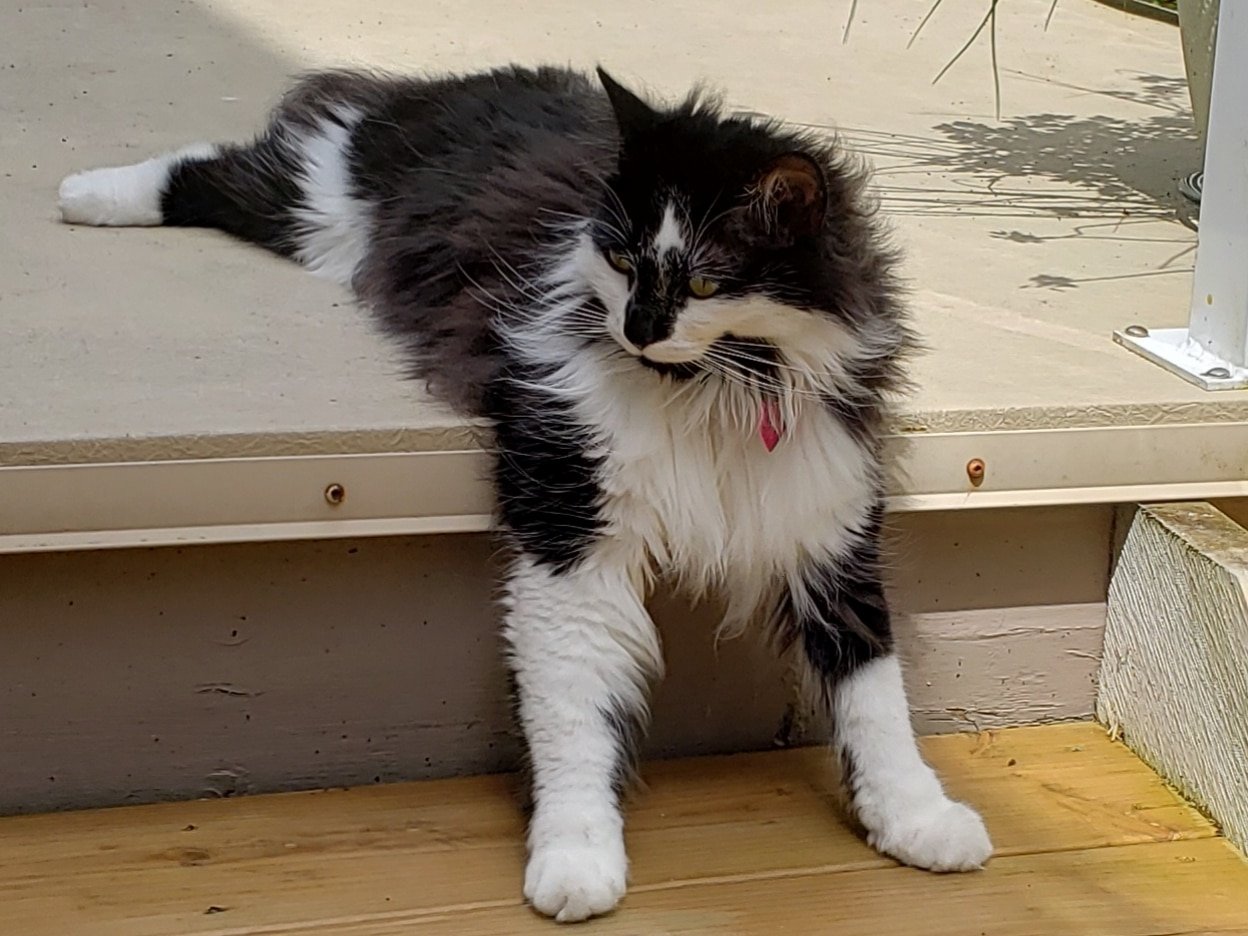 What are her favourite hobbies?

Tormenting her sister Belle is top priority for Mindy. Things like eating, sleeping and cleaning come second to this.  She loves the outdoors but tends to wander and has twice gone missing for 48 hours. Both times she went missing we were extremely devastated. The second time was during a rainstorm she had managed to sneak out. We hired a $1,000 Pet Detective and while we were writing the cheque for them to start searching, she showed up at the back door like nothing had happened. She likes to climb in door jambs thinking its a tree and takes off afterwards like its a game. She loves her laser and can follow it no matter how fast you move it. She is incredibly quick but definitely not an Einstein. And as much as she likes to pretend she hates her older sister she copies everything she does. And lastly Mindy likes to have her daily nap on her Daddy’s lap while he watches TV. 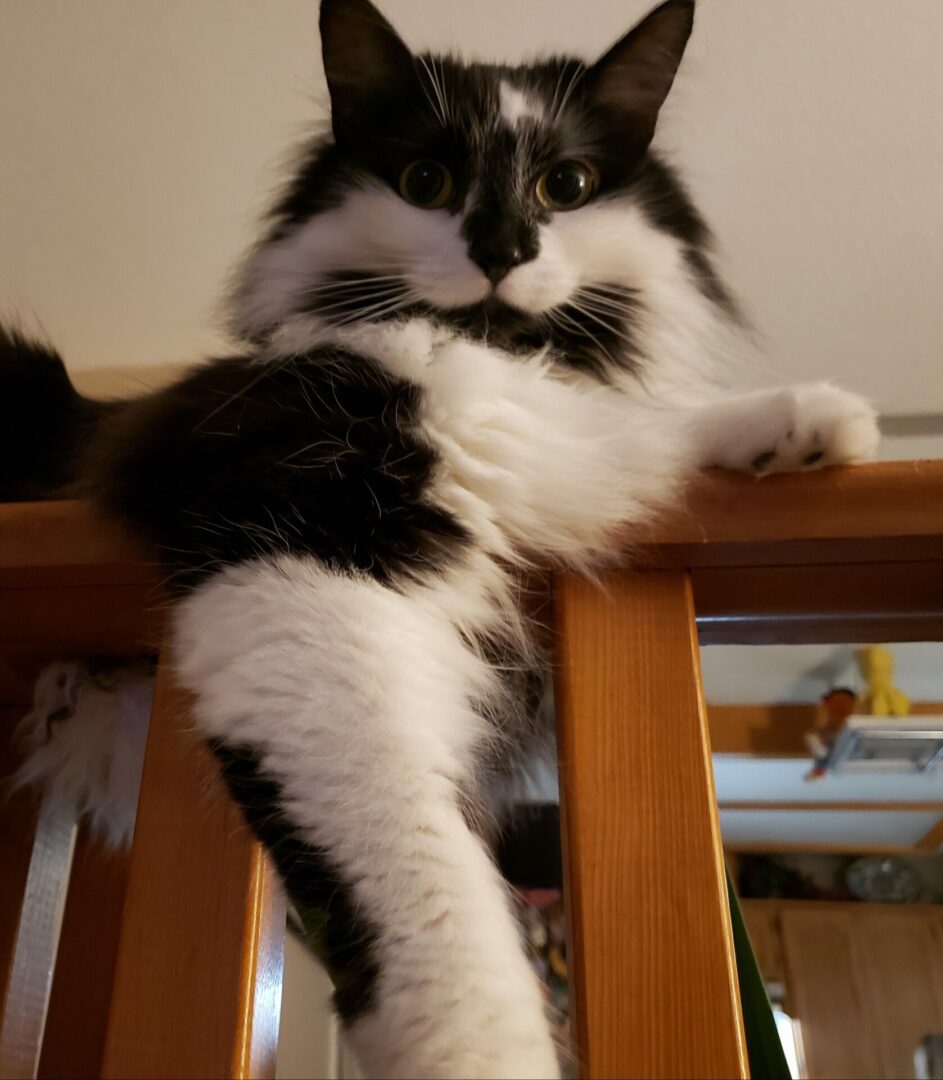 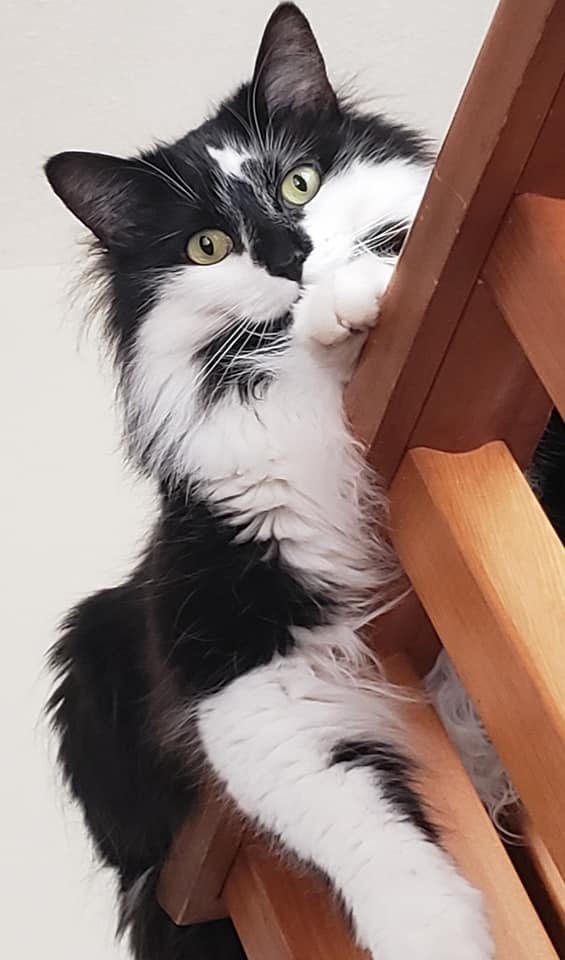 What is something special you would like people to know about Mindy?

Mindy answers to her name and will have a full conversation with you. She always says hi first. People that meet her for the first time immediately think she is “Sylvester”.

I’d like to give a special “thank you” to James and Nicole, Mindy’s cat parents, for taking the time to answer my questions about their kitty and allowing me to share her photos. Sometimes in life, it just seems that even shelter cats know they’re destined for bigger things—they just need kindhearted people like Jame and Nicole to give them the chance they deserve! 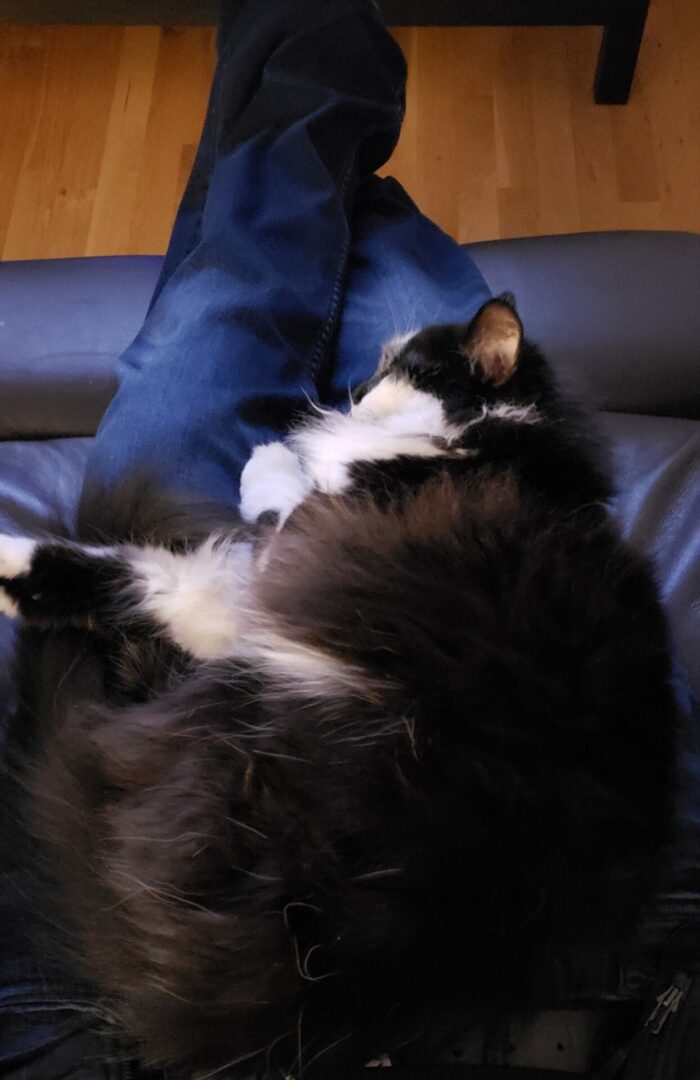 Want to learn about another rescue cat that was born to model? Meet Rover, a cool black cat that’s always ready to walk his catwalk here on CattitudeDaily.com.