I’ve always loved ginger tabbies for their gregarious nature and irresistible personalities. But, if you’ve ever had the opportunity to meet the more rare female ginger tabby cat, you know that these sassy ladies defy your typical friendly ginger cat persona.

For one stunning senior kitty named Pumpkin, she was discovered alone and afraid as a young cat. But, just as cats do, it seems that perhaps maybe in her mind she knew that fate was on her side. The first of her nine lives might have been rough and remains a mystery, but ever since she was discovered shortly before Halloween, she blossomed into the most perfect little pumpkin. And for well over a decade, she’s been loved, adored, and cherished by her doting cat mom. 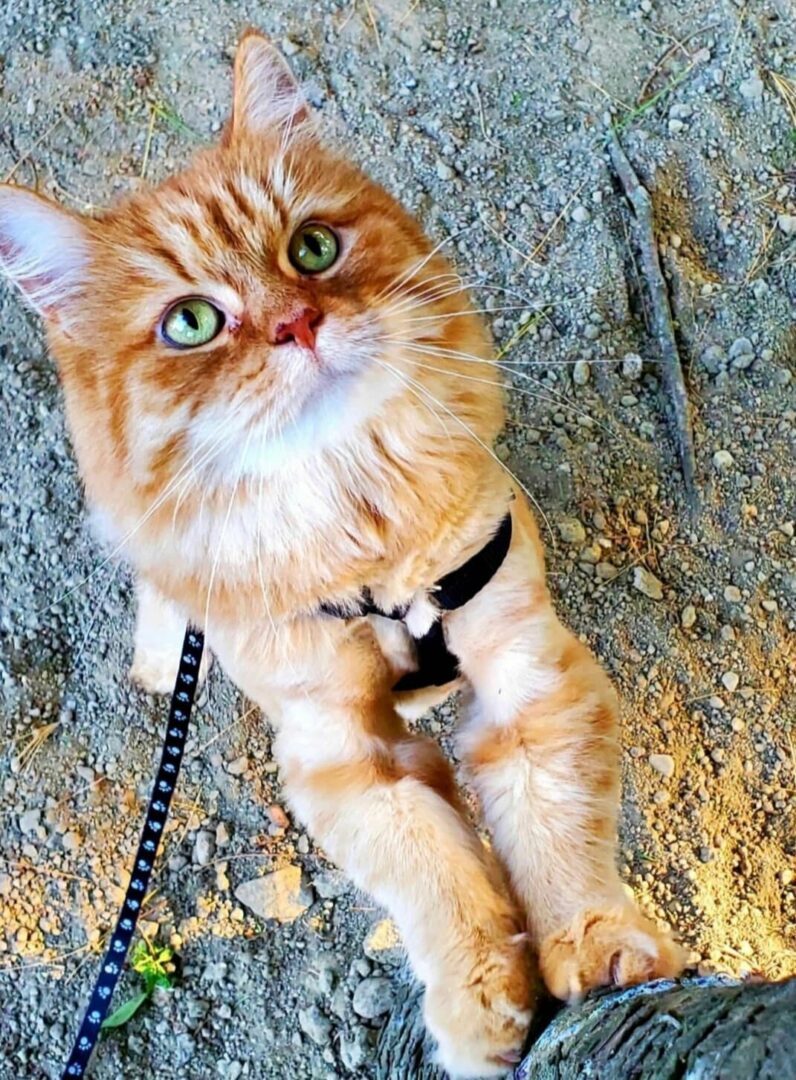 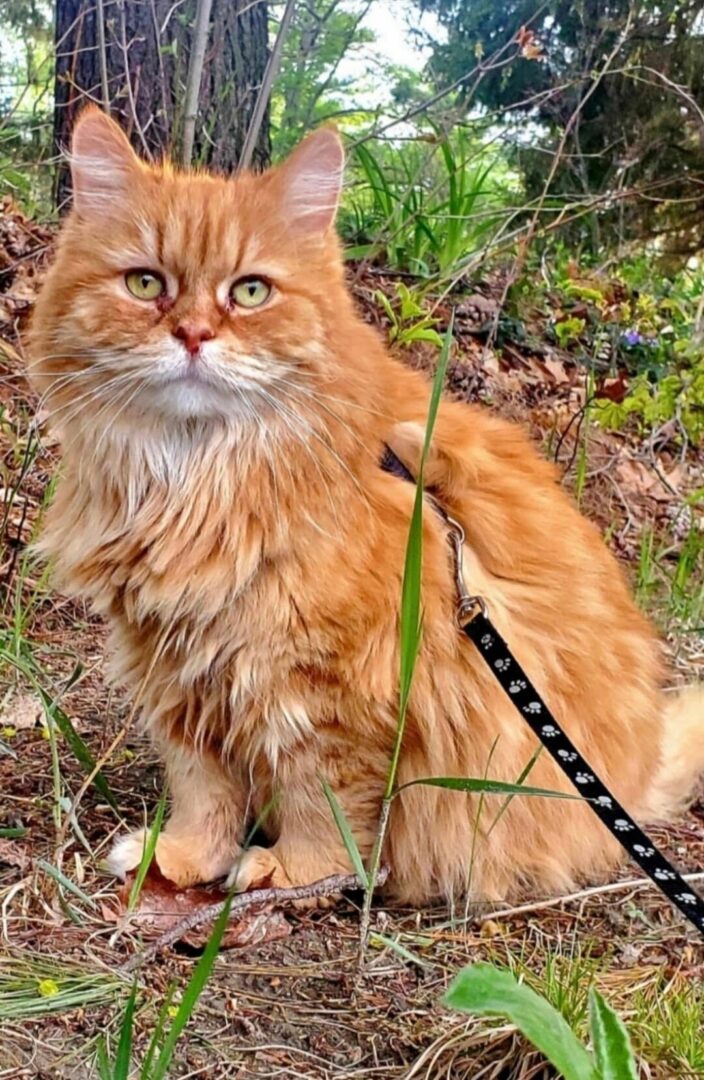 How did Pumpkin come into your life?

On October 17, 2009, I was leaving one of my best friend’s wedding reception just after midnight. As I was walking to my car I spotted something running underneath the cars in the hotel parking lot. I literally got down on my hands and knees, in my bridesmaid dress, and crawled around the parking lot talking to her, trying to get her to come to me. After about 30 minutes, she finally came close enough and I just grabbed her and brought her to my car. I brought her to the humane society the next day, and they kept saying ‘him’ and I kindly chuckled and told them I found no indication that she was a male cat. Apparently, around 90% of orange cats are males, but she was in fact a girl. They held her for a few days and once she was cleared she came home.

How did Pumpkin get her name?

Pumpkin got her name because I found her in October, two weeks before Halloween, and she’s a bright orange color just like a pumpkin. 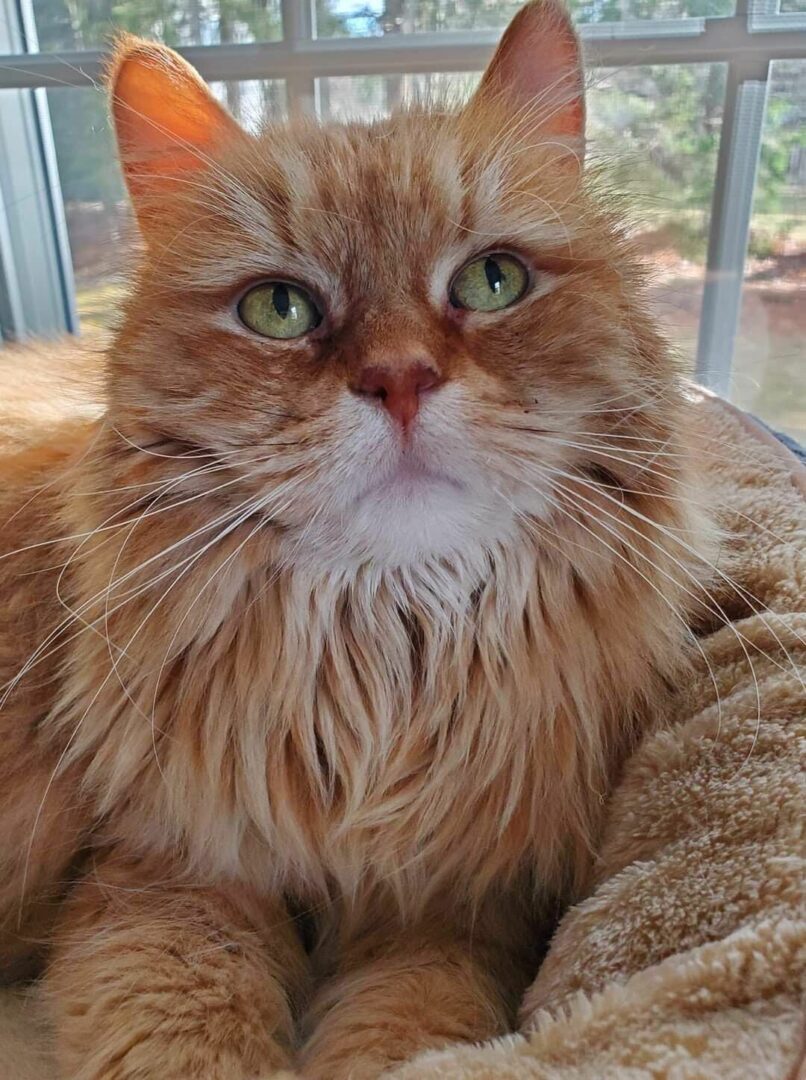 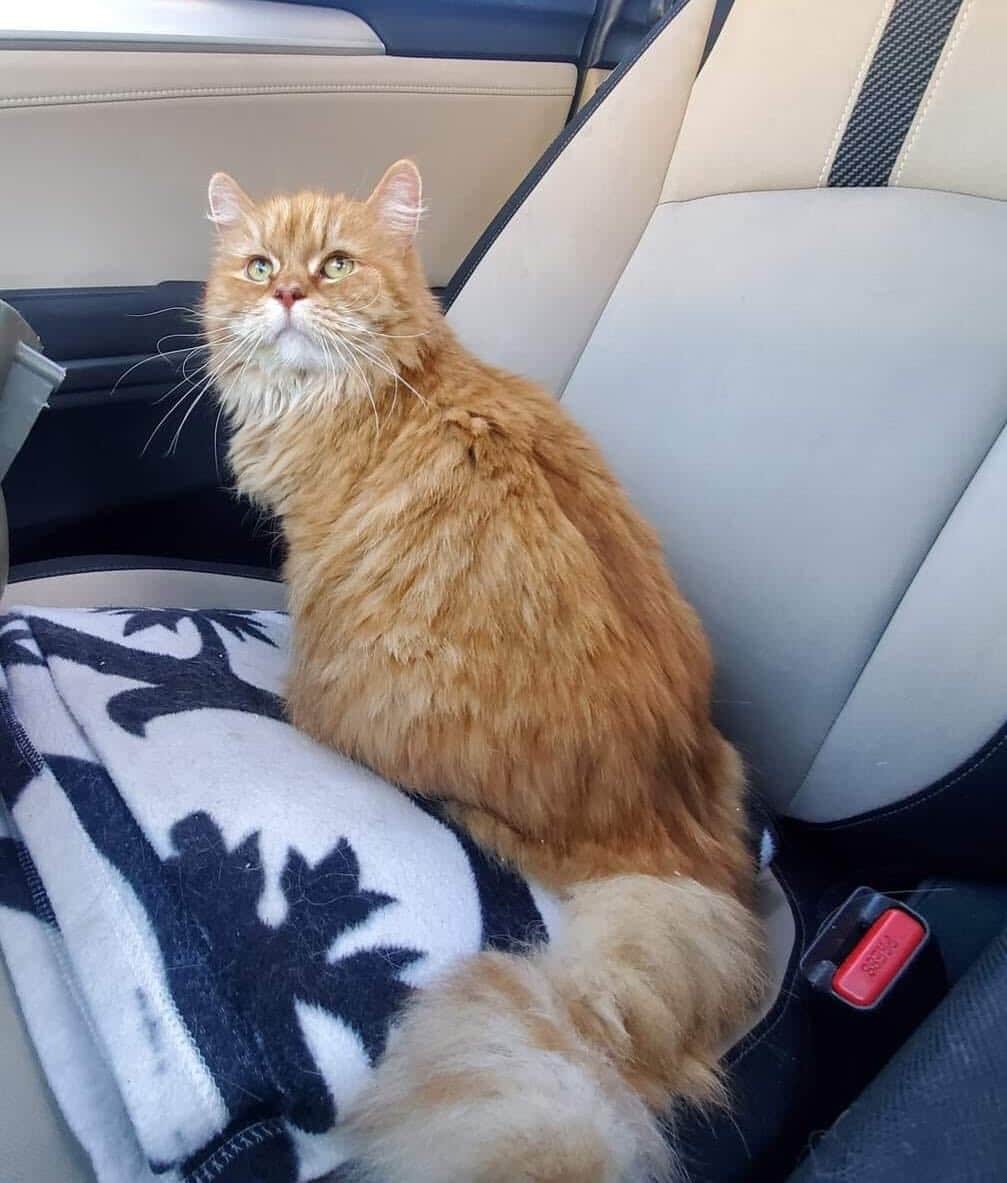 She is stubborn and independent! She LOVES food, and never misses an opportunity to swipe food out of your hand or off your plate before you even have a chance to defend yourself. I also call her my chunky, spunky monkey.

Besides trying to steal food, she LOVES to go outside for walks on her harness, which she can only do 6-8 months out of the year due to the winter here. I started walking her as a way to get her to exercise and keep her weight in-check. She loves to sit on the cat tree at the back door and watch the wildlife during the day, or sleep in the bay window watching the world outside. In her older years, she’s also started to enjoy getting attention and snuggling on the couch at night.

Does she have any cat or dog housemates at home? (I know you mentioned having five cats total). She lives with 4 other cats, and a free-roaming bunny. Although she does coexist and get along with the cats in the house, she’s a bit of a loner and mostly enjoys just being by herself or just being with her human. 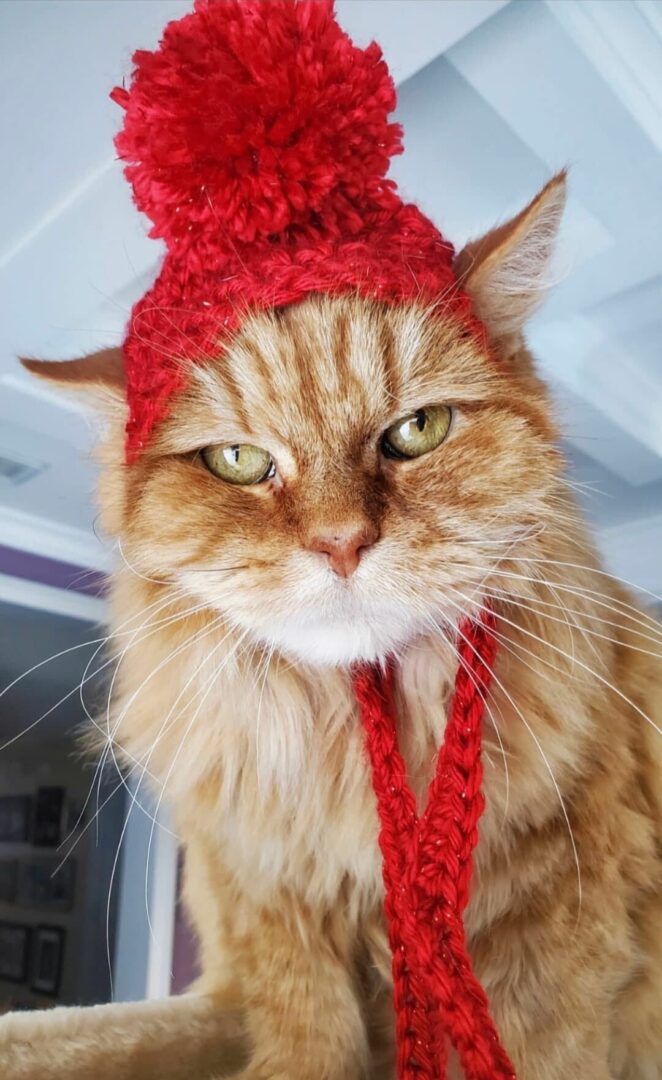 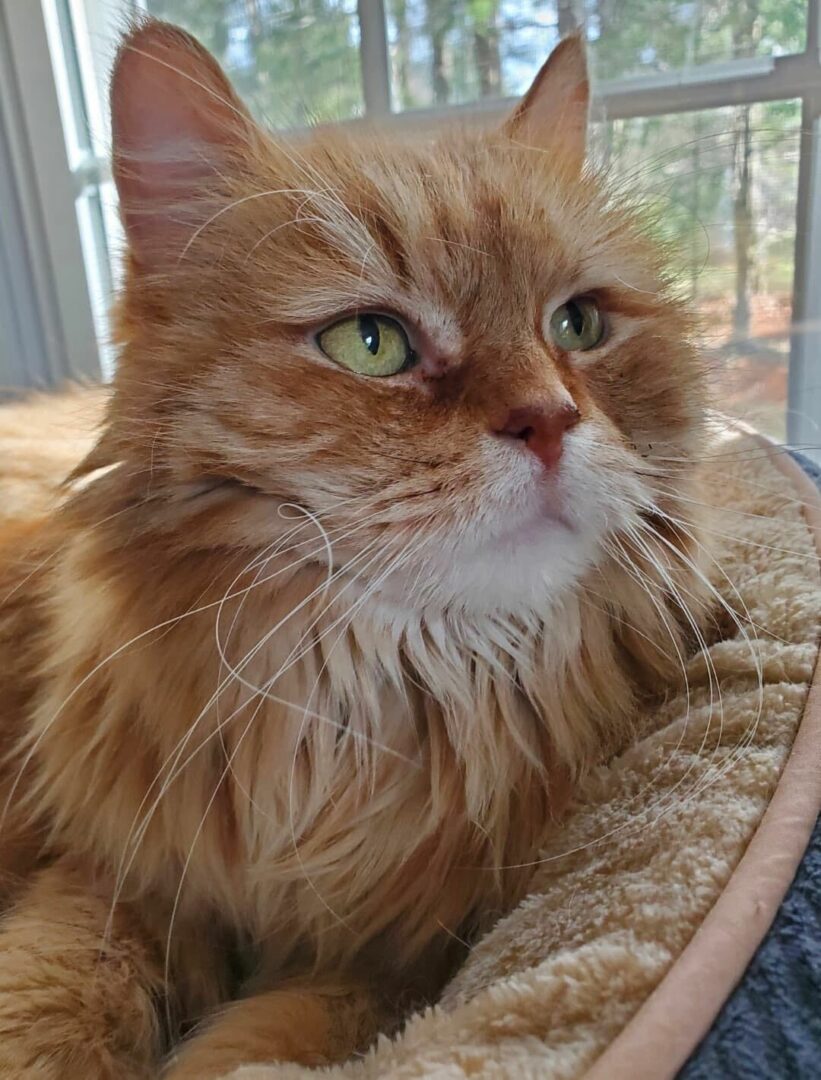 What’s something special you’d like for people to know about Pumpkin?

She’s a little bit of a high-maintenance cat. Pumpkin was discovered to have a heart murmur at a young age, and further testing showed she has Hypertrophic Cardiomyopathy, HCM (abnormal thickening of the left heart ventricle). Over the years, the thickening was deemed to be mild. However, 3 years ago the vet told me the thickening had turned severe. Although it didn’t seem to impact her he wasn’t sure how long she would survive like that. As it is now, she’s still doing great and I know that it won’t last forever so I cherish every day I have with her now.

On top of the heart disease, she also has extremely thick fur and therefore requires haircuts twice a year due to mats. She is also prone to urinary crystals (which isn’t that common for female cats) and constipation. So, she requires a special prescription urinary and high fiber diet to keep those issues at bay. She also has anxiety and has been on fluoxetine for a few years to help that. Even with the few issues she has, I wouldn’t change her for the world! 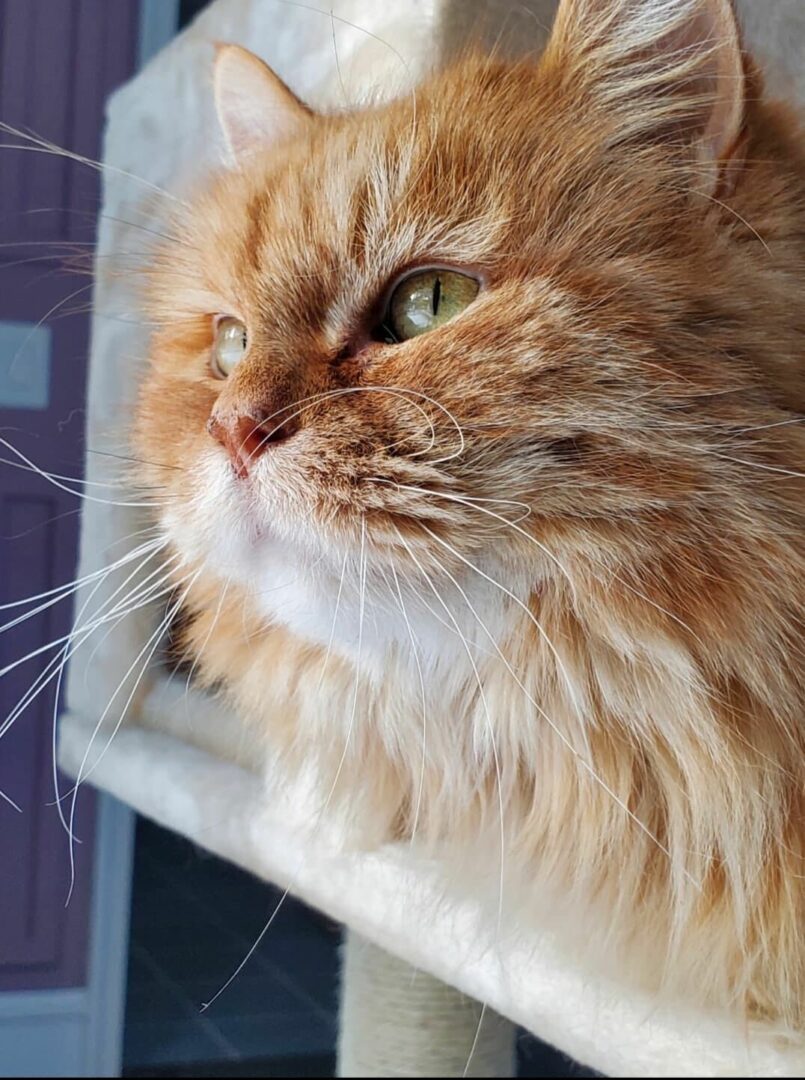 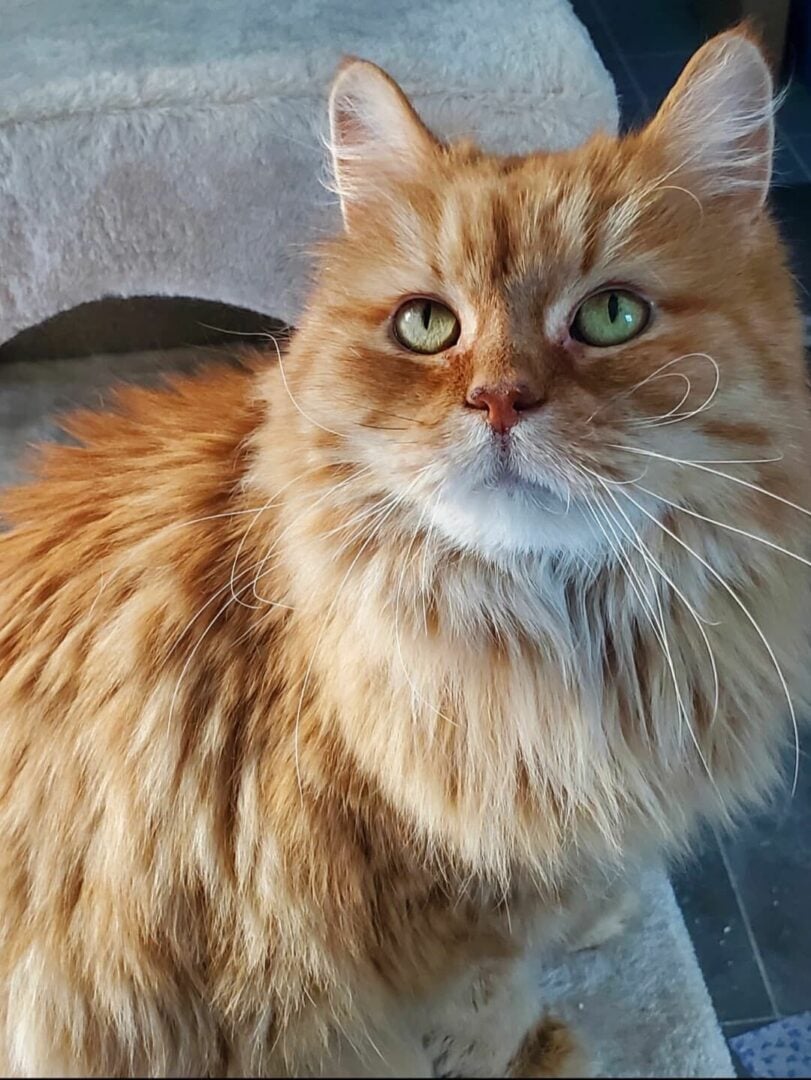 I’d like to give a special “thank you” to Pumpkin’s cat mom, Jenna, for allowing me to share her story and photos with all of the Cattitude Daily readers. If you know someone else who has a soft spot for female ginger tabbies, don’t forget to share!

How Pets Positively Influence Your Mental Health And Well-Being