When it comes to feral cats, not all will ever get the opportunity to learn that humans can be trustworthy. But for five feral tuxedo cats out of Phoenix, Arizona, they’ve learned firsthand that there are kind humans who work hard to earn their trust and show them love no matter what.

Sometimes in life, cats cross our paths that we know we just have to help. And this story of five feral tuxedo cats is one of those stories. I learned of their plight in the Tuxedo Cat Lovers group on Facebook, and thankfully their caregiver agreed to let me share their story. 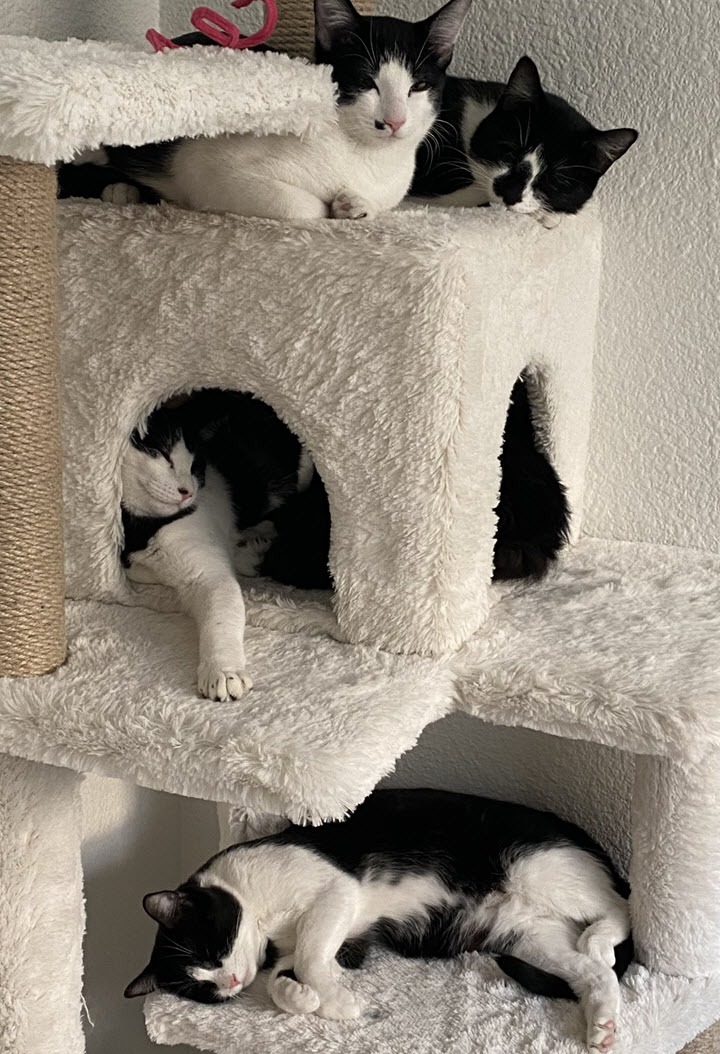 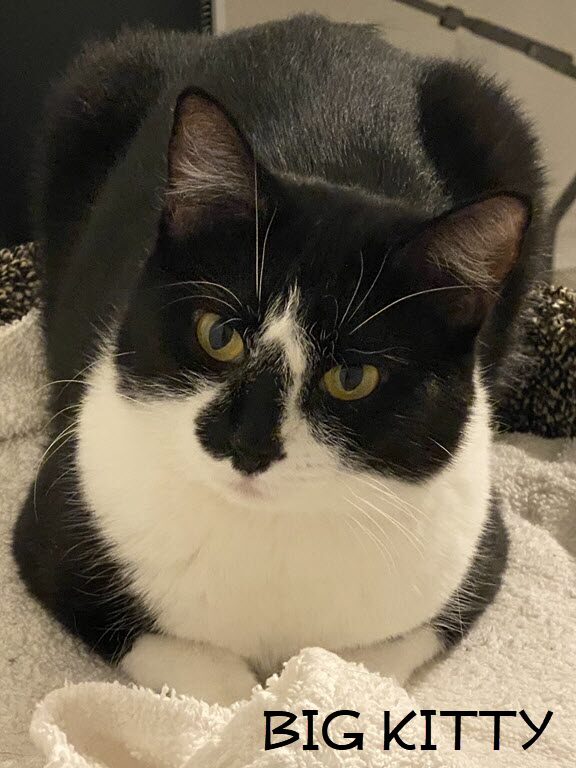 How did these cats come into your life?

About a year ago, we moved into a rental house while building a new home. The neighborhood has a large colony of feral cats.  These cats were always hanging very close to our yard and we began feeding them. We were unable to approach them as they would run away anytime we got close. A couple of months down the line, the HOA in our neighborhood sent us a notice requesting that we NOT feed the cats. I toyed with the idea of setting a trap and trying to catch them. Over the next few months, the smaller cat began to allow us to per her when she was eating. After several weeks of that, we started feeding her in a carrier, and one night nudged her and trapped her. I had to find a place to keep her as I already have two cats and three dogs in my house. I have another rental that I was using as an office and decided to relocate her thereafter she was checked out, spayed, etc.

Shortly after, one of my neighbors told me that she thought the other cat had kittens in her yard. We had been seeing a coyote wandering the neighborhood recently so we didn’t want to take any chances and began to bait two traps in hopes of catching the mom and her three kittens. Over the course of a week, we were able to catch all four including mom. After getting them to the vet, they were all moved into the same location with the first kitty. So, there is now a total of 5 feral cats living in my office. I am only able to spend 1-2 hours each day so they have not warmed up to us yet, other than the first one, which was generally friendly by the time we caught her. 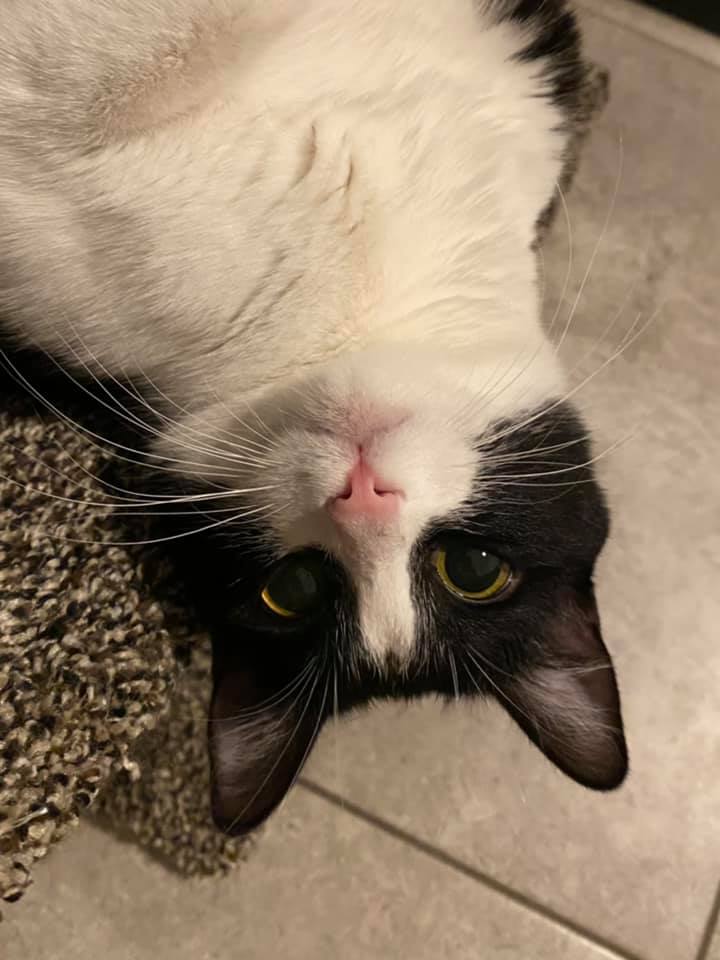 What are their names?

The first two were not very creative since we had no intention of ever trapping them.  Since they looked alike, other than their size, they became Big Kitty and Little Kitty. Big Kitty is also now Mama Kitty. The two little boys are Pixel (spot on his cheek) and Harley.  And then there is a longhaired little girl that is Ruthie.

How long did it take you to earn their trust?

Other than Little Kitty, the others are taking a long time to warm up. There is a LOT of hissing involved. Harley is still the worst and seems scared of everything we do. Pixel has moments when he can be petted. Ruthie is scared as well, but will sometimes allow petting after eating. Big Kitty is slowly allowing brief touches and has been showing a lot of signs of being happy. She plays a lot when we are not there (we have cameras on them) and will get down and play even when we are in the room. None of the 5 want to be handled at all. We were making some progress with Little Kitty, but she has regressed a little bit now that she has 4 other cat friends. She doesn’t need me as much anymore. 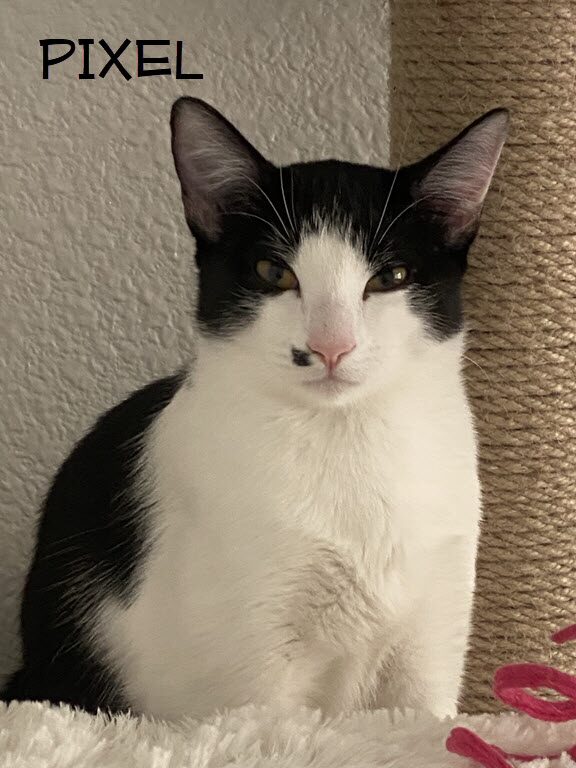 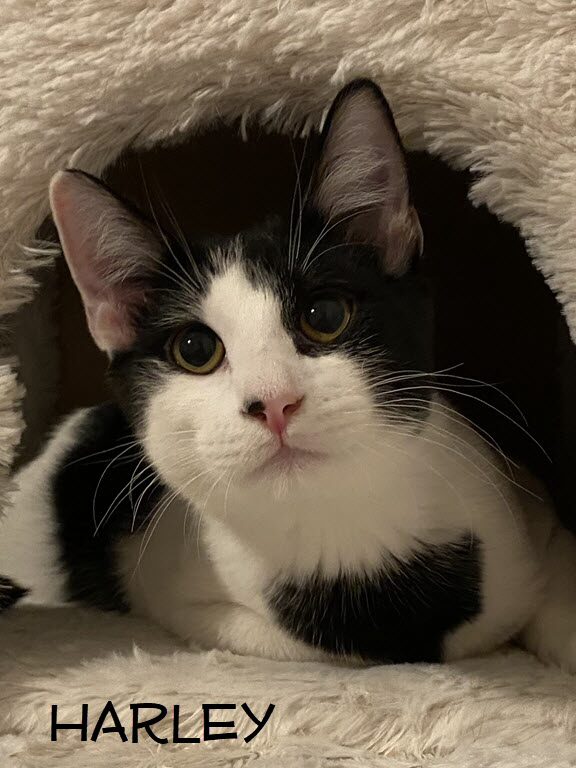 If you don’t mind me asking, do you have plans to keep them or help them find forever homes elsewhere once that time comes?

The goal is to find them homes, but I think that they have a long way to go before they will be ready. Not many people want to adopt a cat that hisses and refuses to be touched. We somewhat plan on keeping Little Kitty once we move into our new house. And if Big Kitty ever warms up, she may come with us too. It’s all very uncertain.

What’s something special you’d like people to know about your feral tuxedo cats?

This is the first time I have ever tried this and it is much harder than I thought it would be. I had always had friendly cats before. Spending months with these and only getting as far as I have is a little stressful.  That said, I know that I am doing things wrong. They likely should be separated into smaller groups and I need to spend more time with them. As long as these get adopted out, I assume I keep trying to help foster cats. I think it will be really rewarding. That said, if I don’t find homes for these when they are ready, I likely wouldn’t take in any more. 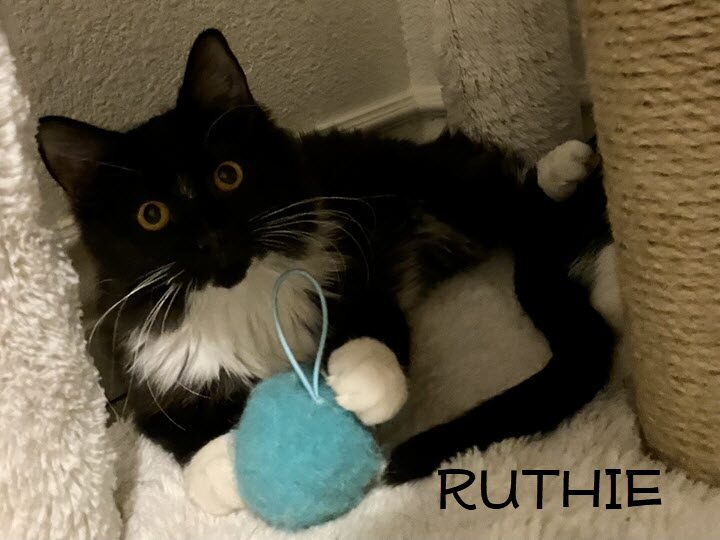 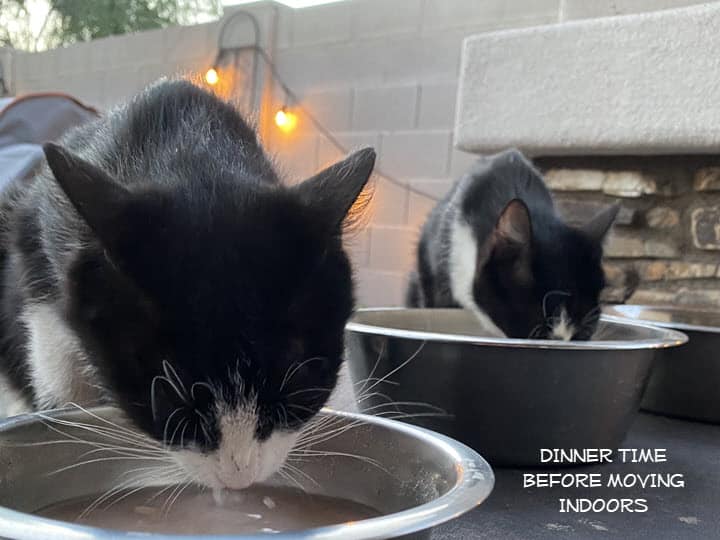 I’d like to give a special “thank you” to Kerry for not only taking a chance on these cats in need, but for allowing me to share their heartwarming tale with all of the Cattitude Daily readers. Here’s to hoping they all live out the rest of their nine lives as happy as possible.

Need some advice for caring for feral and stray cats in your area? Read our tips here on Cattitude Daily.

Big Cat 411: All About The Caracal

Mama Cat And Her Kittens Dumped At A Graveyard