For a tiny little kitten barely even a month old, finding yourself all alone is a very scary thing. Down in Houston, Texas, recently a beautiful white kitten was rescued by a kindhearted woman in the nick of time. Patiently this sweet male kitten now called Snowy waited there just hoping for someone to see him. But sadly, he was likely to weak to move and needed help fast.

I caught wind of Snowy’s story of survival while scrolling through Facebook, and reached out to my Facebook friend, Jane, to see if she’d allow me to share this story. Because as we cat lovers know, this happy ending is similar to so many other stories of helpless little kittens that get lucky to find humans with hearts for cats in need. 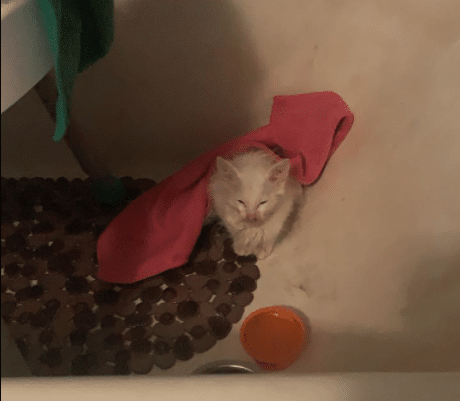 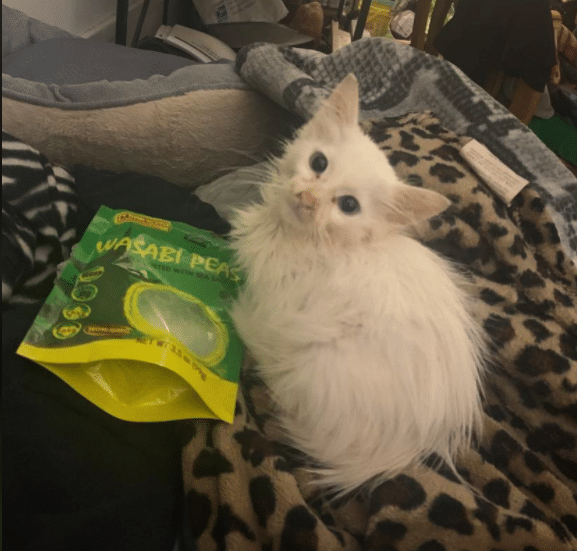 Can you tell me how you found Snowy?

I found him cuddled on the fourth step as I was going down, on my way to work. He was so still, he was either scared or too exhausted from being very hungry and thirsty.

About how old would you say he is?

I would say, he is between four to six weeks old.

Is he in good health?

He is bony and underweight but considering that he was living outside it’s a miracle he’s alive. Really, he is healthy all things considered. He’s just really underweight. I am feeding him wet food from my finger. He may be eating a little on his own, but I am carefully force-feeding. This kitten is gaining energy every day. Wonderful that this beauty came into my life. A gift from God. 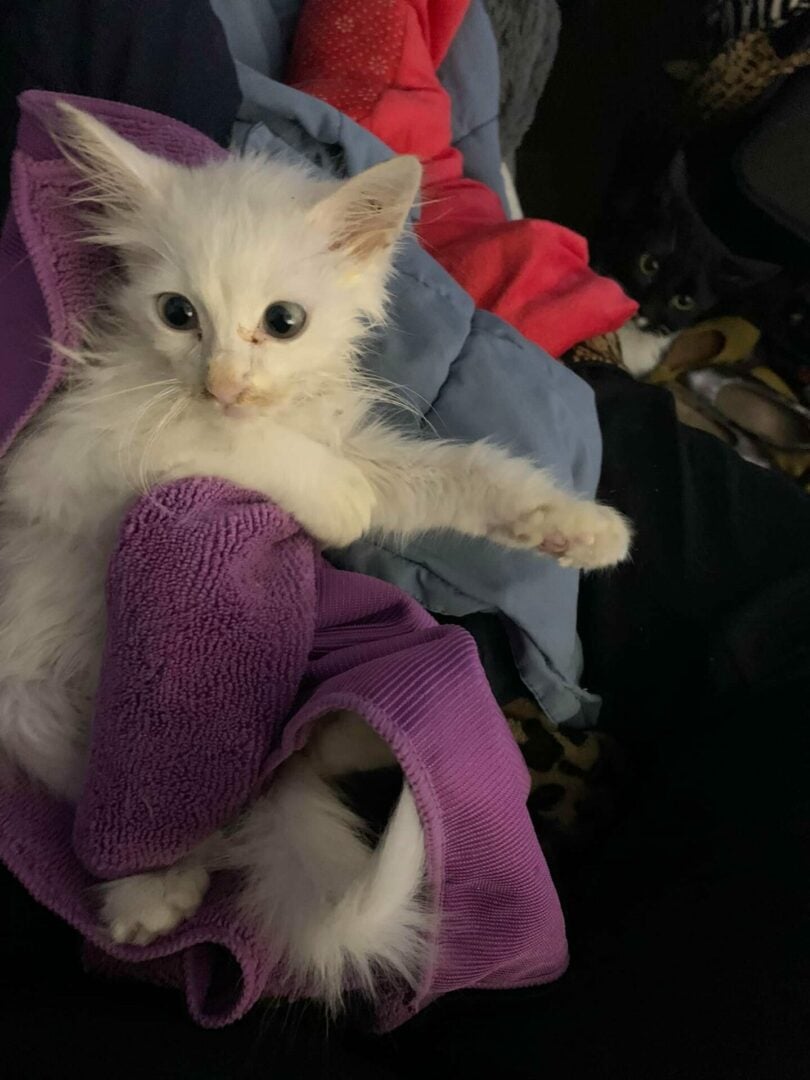 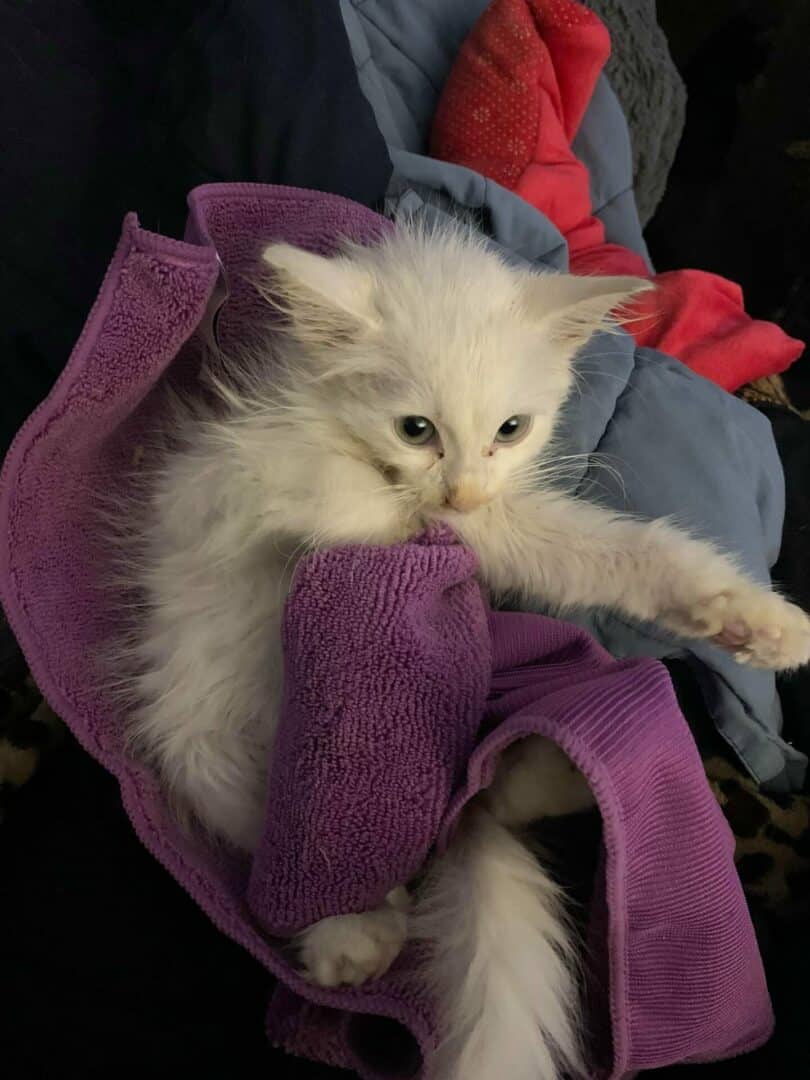 Has he come out of his shell yet? (I’m sure the poor little thing was terrified!)

He is very sweet. He meows out to the other cats when they are looking at him. He purrs a lot.

I’m assuming that you plan to keep Snowy?

I plan to keep him, I will probably call him Frankie, because of his blue eyes, like ‘Ol’ Blue Eyes’ Frank Sinatra. I will do that after confirming on Thursday, when he goes to the vet, that he is a boy. (She settled on Snowy!)

Does he have any dog or cat housemates to play with?

He has TobyMac who is two years old, adopted from SPCA, two years ago, a Tuxedo cat, and Sagebrush, 18 months old. A tortoiseshell cat, also adopted from the SPCA in June of 2020.

What’s something special you’d like people to know about Snowy?

The special thing about Snowball right now is he is very passive and very sweet. He has such a good disposition.

I’d like to give a special “thank you” to Jane for allowing me to share Snowy’s story with all of the Cattitude Daily readers. Here’s to wishing her and Snowy a happy nine lives together. 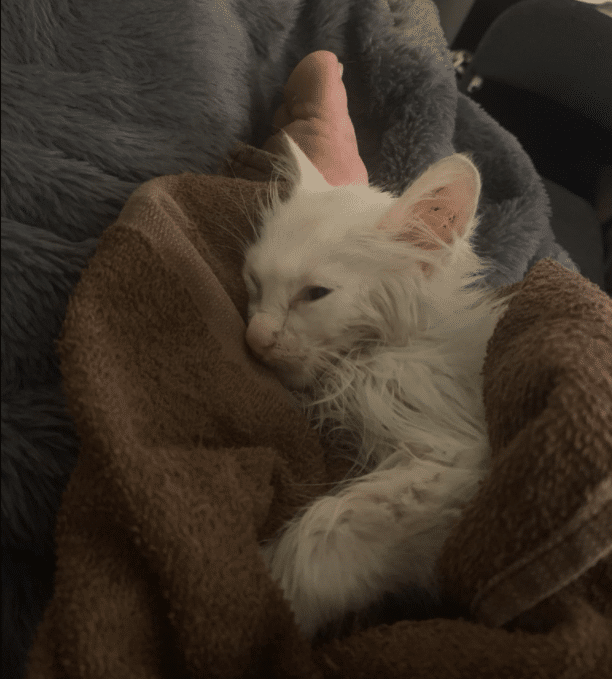 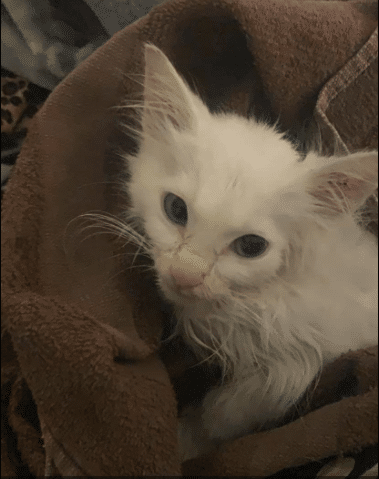 A Collection Of Bread Loaf Cats To Brighten Your Day