If you’ve ever read the book or seen the movie “IT,” no one would blame you for never looking at a storm drain the same way again. And with spooky season in full swing, those potential monster traps should be avoided at all costs. Unfortunately, a tiny New Orleans kitten didn’t get that memo. The little stray has already experienced his fair share of scary situations after being found struggling to survive in a storm drain. But unlike a scary movie, this story stars a team of hard-working rescuers and has the best happy ending you could think of. 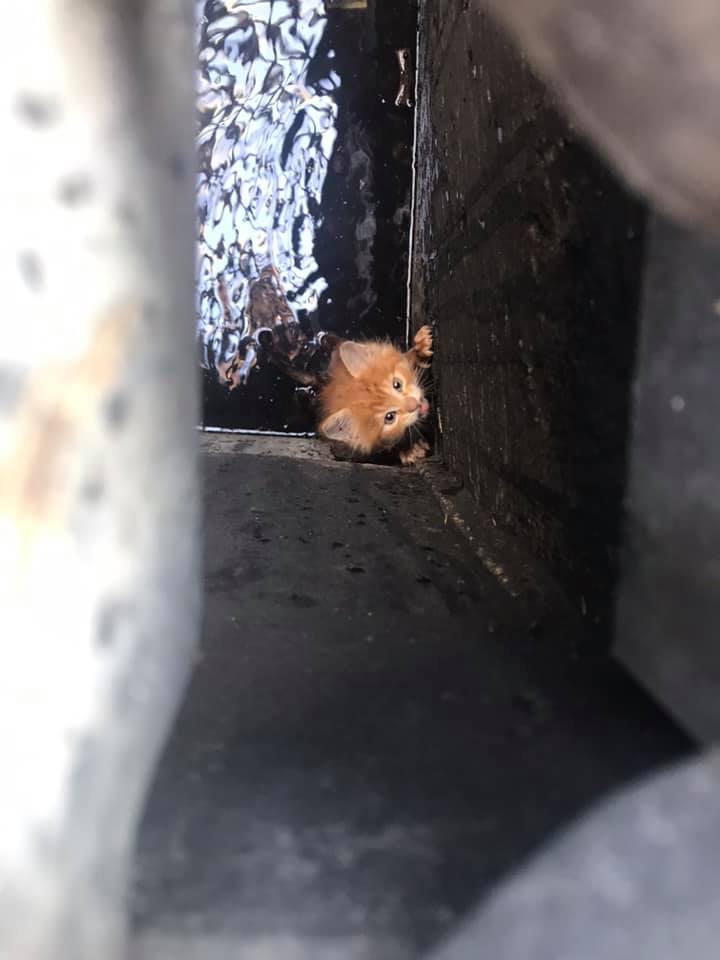 Image Courtesy of The Louisiana SPCA

When the Louisiana SPCA got a call about a trapped kitten, they knew they had to act quickly. The tiny ginger cat must have slipped through the grate of a sealed storm drain, and there was no way he could climb out by himself. Rescuers have no idea how long the little guy had been stuck, but without help, he could have starved or drowned.

Rushing to the rescue, the Louisiana SPCA Humane Law & Rescue officers called the New Orleans Fire Department for backup. The storm drain consisted of a sealed grate cemented into a busy roadway, and it took a lot of time and effort to get it open.

The team of fire fighters worked as quickly as they could as the frightened kitten meowed for help. When they finally pried the grate out of the ground, they reached in for the rescue.

The kitten was wet, scared, and young, but he seemed to be in good health. SPCA officers then transported the rescued little kitten to be checked by a vet and cared for by the shelter.

It was determined that the kitten was too young to be adopted just yet, so shelter staff arranged for a foster home. But there was still one thing to do. The storm drain kitten needed a name.

The shelter took to Facebook for ideas. While plenty of people suggested names like Blaze and Stormy, it was soon obvious what the perfect name would be. In honor of all things spooky and his storm drain rescue, the kitten was named Pennywise after Stephen King’s clownish monster.

Pennywise still has a few weeks in foster care before the shelter will consider potential adopters. He had a scary start, but we bet he’s in for a well-deserved happy ending.

Twelve Purrfect Gifts For The Cat Lover In Your Life–Or To Just Treat Yourself!