Florida Cat Burglar Turns Out To Be The Feline Kind

We know that cats are the masters of hiding, and there are a select few that can be downright naughty at times! But for one cat, now identified as Bones out of Florida, it seems they took feline mischievousness to a whole new level.

The Collier County Sheriff’s Office received a call over the weekend reporting suspicious activity at a place of residence. They shared the original story with their Facebook followers, after their cat burglar turned out to be exactly what it was—a cat!

“Sgt. Sudano, Cpl. Caceres, Cpl. Nova and Cpl. Henderson responded to a residence on 60th Avenue N.E. in reference to a suspicious incident that was possibly a burglary in progress. Upon arrival it was discovered that a small feline was the culprit behind the disturbing sounds that prompted the call. The “cat burglar” was quickly detained and turned over to Collier Domestic Animal Services for safekeeping and fur-ther questioning.”

Although the homeowner likely experienced quite a scare, we’re happy that it was only a curious feline rather than a dangerous intruder. And thankfully for Bones, his microchip is really what saved the day and reunited him with his rightful owners.

The most recent updated post from the Collier County Sheriff’s Office:

Watch the fun clip here to see how it all went down for little Bones!

Have you ever heard of a real-life cat burglar? I know that there is one feline from Auckland, Australia, who coincidentally is a tuxedo cat, too, that steals articles of clothing from his neighbors’ clotheslines and brings them home as his trophies!

Look at little Mo—with all his loot! 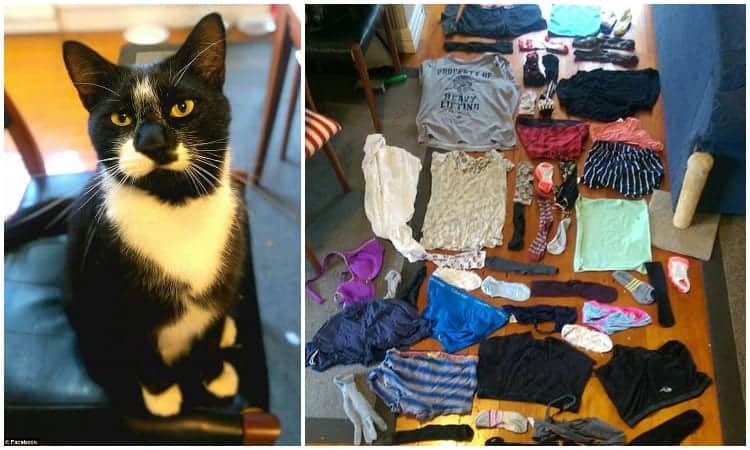 Just look at those faces—no remorse! We can chalk these up to cats being cats, but let’s hope that Bones has left his life of crime behind him.

21 Camouflage Cats Who Blend In Purrfectly