Five Rescued Torties Are Living Their Best Nine Lives Together

There’s something truly special about tortoiseshell cats. While some can look quite similar, thanks to good old cat genetics, no two torties can ever be truly identical. And aside from their infamous tortitude, this is one of their many charms. Tortoiseshell cats are a favorite among many cat lovers—and this is especially true for two cat lovers out of Maryland.

For the Five Torties of Instagram fame, they’re living out the rest of their nine lives together thanks to a kind couple with a heart for cats in need. And they’re helping to preserve the memory of the late Chloe Bear of their cat clan, a sweet tortie cat with a heart of gold who has forever left her pawprints of her cat parents’ hearts. If you’ve got a soft spot in your heart for tortoiseshell cats, then their story is right up your alley. 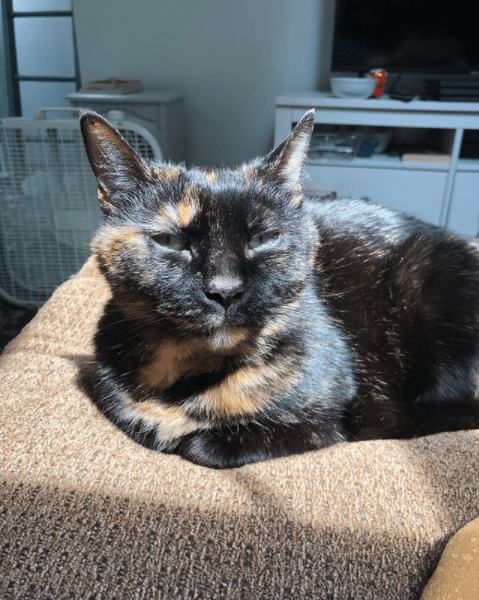 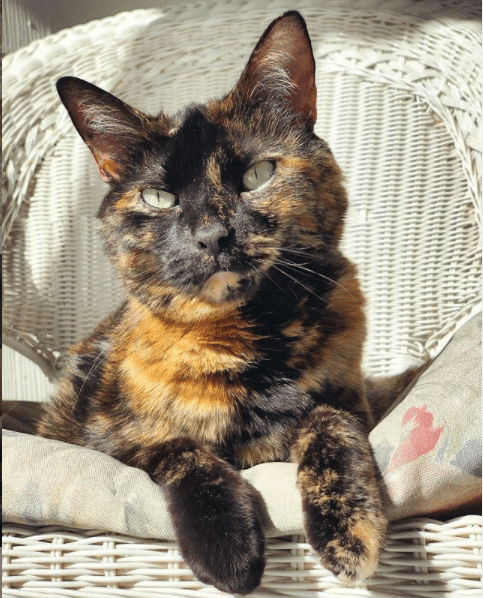 How did Karma, Chloe Bear, Chelsea, Lila, Lola, and Ducky come into your life?

Karma, 12, was our first tortie. In the winter of 2009, Karma, just a kitten at the time, sought shelter at my boyfriend (now husband) Nick’s row home in Baltimore during an ice storm. The day after the storm, Nick opened the door for her in case she had a home of her own to get back to. She looked at the open door and then proceeded to curl up on the couch. She was home. 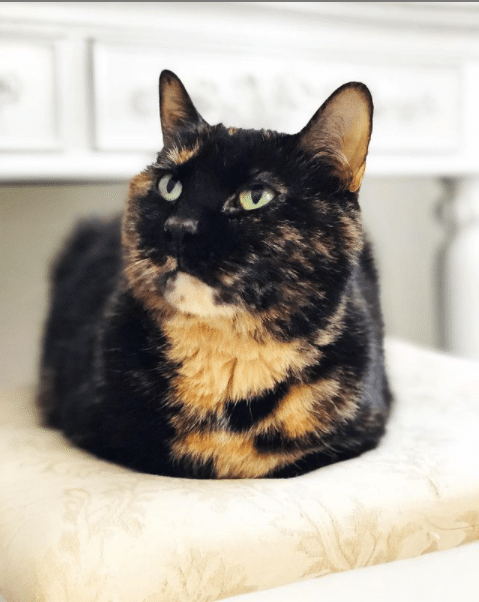 After a couple more years, I went into a local pet store and saw an adult tortie who was being fostered by that store. I had never seen another tortie, so I was tickled by this. Chloe Bear was her name. She was about 9 at the time, and she had been in foster care for five months. I fell in love with her, as she was incredibly sweet, and she loved to kiss my cheeks. We adopted her. Nick and I now had “his and hers” torties. Chloe Bear sat on me every day and slept with me under the blankets every night. We were in love.  Karma was displeased. 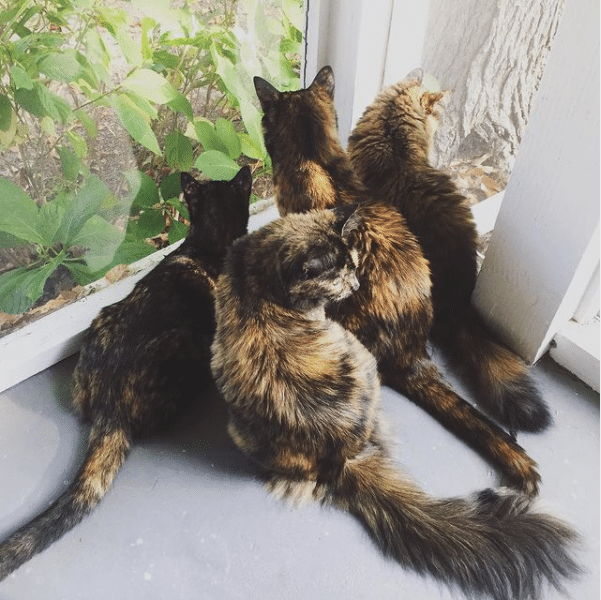 A year later, I did a search for a “tortie kitten” because Nick and I thought Chloe Bear might like a little friend. (Karma made it clear that she was not Chloe Bear’s friend.) That’s when we discovered Chelsea, a kitten who was being fostered by a Baltimore man who found Chelsea crying while simultaneously eating someone’s leftover cheeseburger. Chelsea was and still is a little squirt. She has beautiful fluffy cheeks and a lovely singing voice. Her spunkiness is unmatched. Chelsea fell in love with her new home and her new family. She asked Chloe Bear to play every day, but Chloe Bear felt too mature to indulge in Chelsea’s games. Karma watched from afar, displeased.

In 2012, we bought a house nearby. Nick and I, along with our three torties, settled into our forever home. We had more space than before, so everyone could spread out as they wished. We had an Instagram account for our tortie ladies, and we were enjoying our lives.

It wasn’t long after we settled into our home when we received a message on Instagram that there were two tortie kittens, Lila and Lola, who needed an adopter. We applied, and they were flown to us from Miami. We became a family of seven. Chelsea finally had two friends who wanted to play with her. 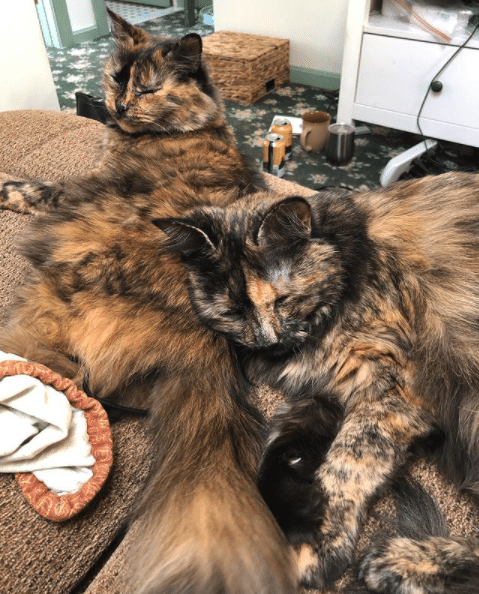 We lived a beautiful five years together, the seven of us, until Chloe Bear passed away last winter due to bladder cancer. It was one of the hardest days of our lives. We cried for weeks and were solemn for months. Lola knew I was hurt, and started sitting on my lap, which is what she saw Chloe Bear do every day. Lola has been such a comfort to me, almost like a therapy animal. She lets me nap with her. I’m so thankful for her. It has been a long year. Our family has felt so small without Chloe Bear, but we have carried on. Only recently did we start opening our minds to the possibility of adopting another cat. We looked into adopting an older long-furred black cat, but she was adopted by someone else. It wasn’t meant to be.

Two weeks ago, we saw that a little tortoiseshell kitten named Ducky needed an adopter. She had been living under someone’s porch with her mother and siblings. She is now ours, and we are all adjusting. We can’t wait for Ducky to be accepted by everyone.  Surprisingly, the only tortie that doesn’t seem phased by Ducky is Karma. 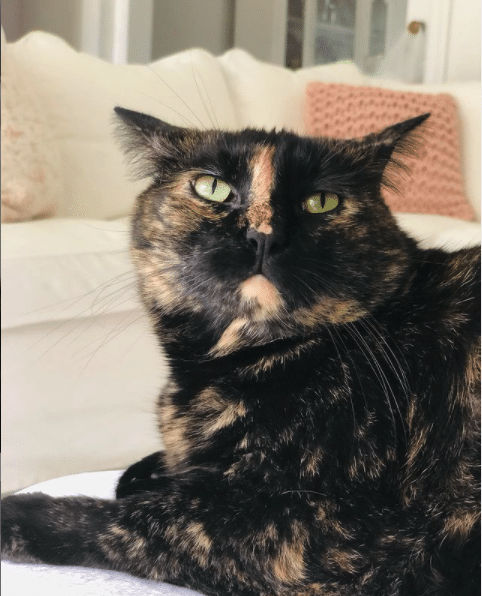 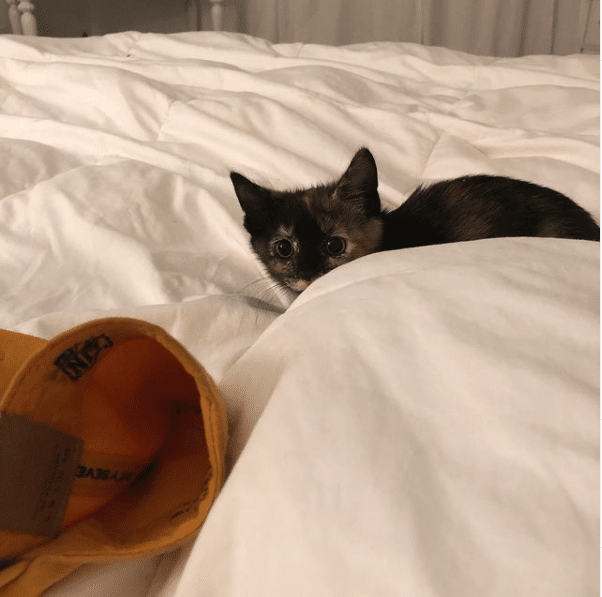 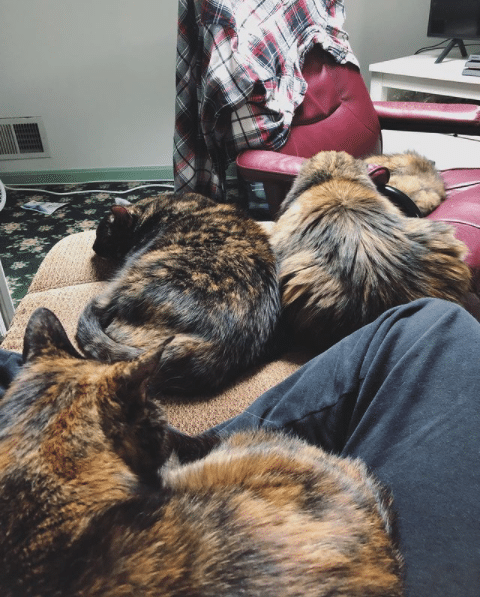 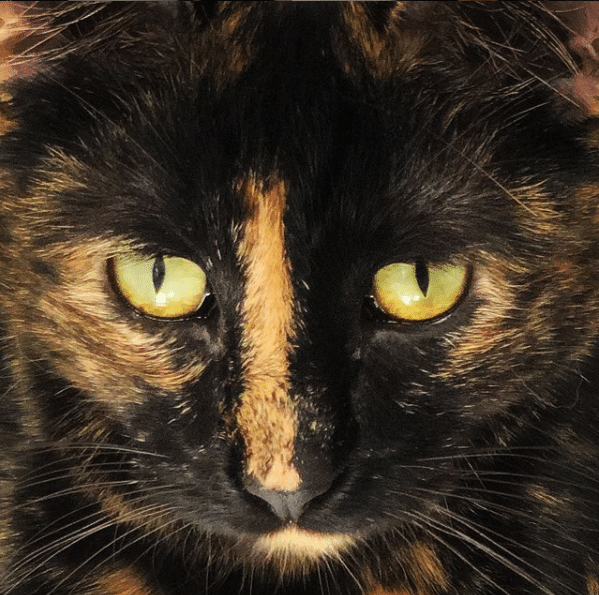 I know that tortoiseshell cats are famous for their “tortitude”—how would you rate theirs?

Karma has the most ‘tude of all. I have a theory that the more golden-colored the tortie, the less ‘tude they have. For instance, Chelsea and Lila are golden torties, and they are very laid back. No ‘tude at all.

They love to be in the same room together (except for Karma). They love dinner time. They love to be on the porch watching the squirrels and birds and catching lizards (to our dismay). Lila likes to play fetch with her toy mousies. 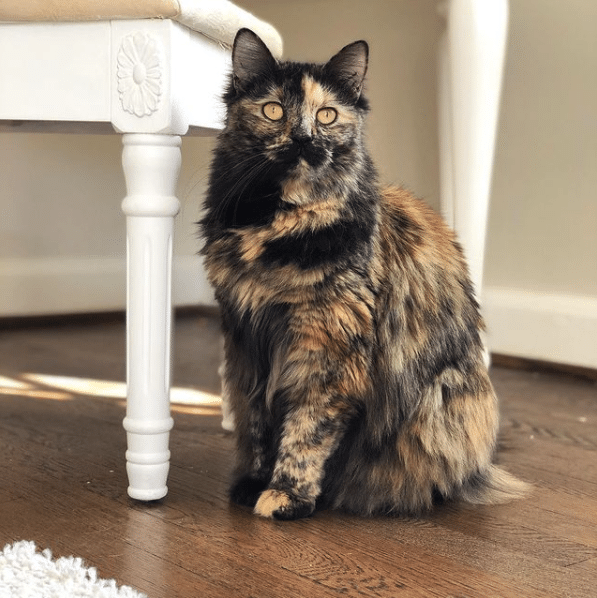 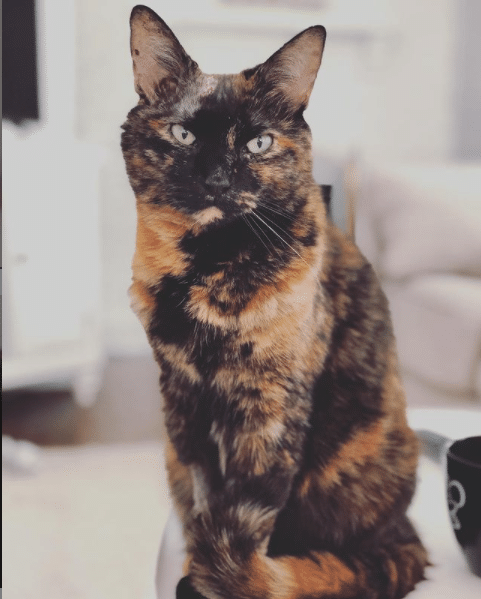 What’s something special you’d like people to know about your torties?

They are all very different in personality. I adore each and every one of them so dearly. The level of spunkiness and silliness is unmatched.

I’d like to give a special “thank you” to Caitlin and her husband for allowing me to share their cats’ stories and images with all of the Cattitude Daily readers. If you know someone who is crazy about torties, don’t forget to share this article with them. And if you’d like to see more of these gorgeous cats, check out Five Torties here on Instagram. 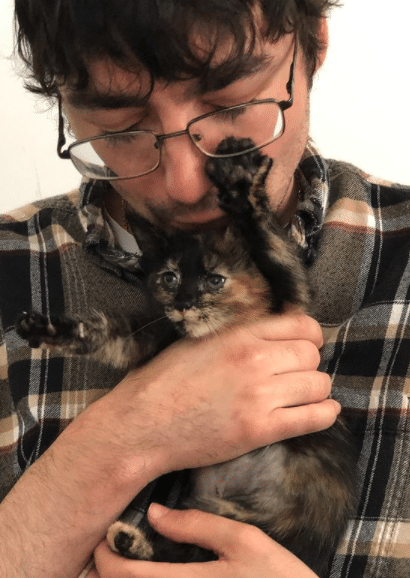 Can’t get enough of tortoiseshell cats? Check out this cute video from the Cattitude Daily YouTube channel to learn all about these pretty and sassy felines…

Mama Cat And Her Kittens Dumped At A Graveyard

Cat Bacteria Found So Powerful, It Can Fight Off Staph Infections