Dog Breeds to Avoid if You Have a Cat

Cats and dogs are notorious enemies. While some dogs and cats do eventually get along, not all breeds are suitable for homes with cats. Some dogs just aren’t cut out for getting friendly with felines.

Most of these breeds are natural hunters. They’ll see the cats as prey animals and hunt them – which is often not very fun for the cat! However, some other breeds fall into this category as well. We’ve included a list of dog breeds that are notoriously bad with cats below. For those with cats, you should avoid these breeds if you want a peaceful home. 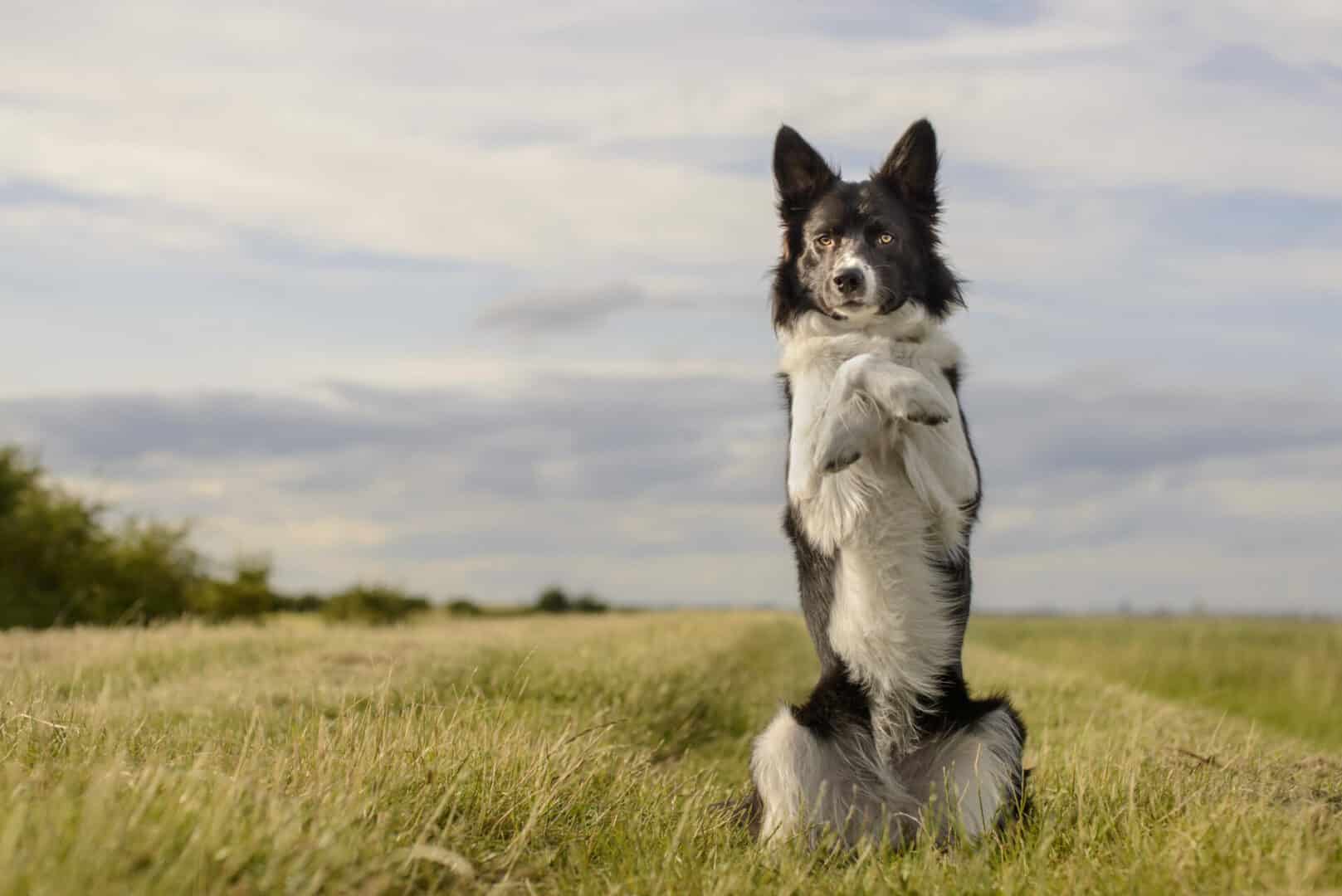 The Border Collie is well-known for having profound herding instincts. They are brilliant and loyal, excel in every dog sport and come in a variety of stunning colors. However – no amount of training can remove their strong herding instincts.

Often, they will compulsively herd anything that’s moving fast, including children, cars, and cats.

Cats often don’t enjoy being herded, prompting them to run. Of course, this only engages the dog’s herding instincts more. Eventually, this can deteriorate into snapping and hissing.

The dog isn’t chasing the cat, not in the traditional sense. However, the cat doesn’t know this and will react like they’re being hunted. 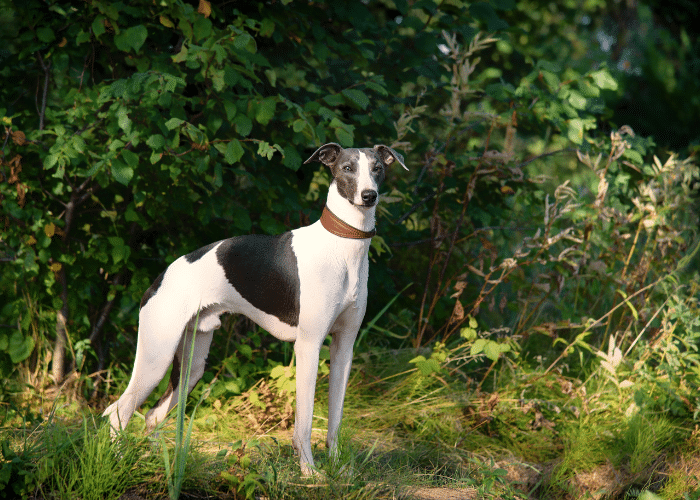 Greyhounds are made to run. They’re sighthounds, so they chase anything that moves quickly!

Cats often fall into this category. A Greyhound can’t help but chase a cat. That’s just how they are. It’s what they were bred to do.

Even Greyhounds that are primarily companion animals have these hunting and chasing instincts. You can’t train them out. It’s innate in the dog. They don’t even know that they’re doing anything wrong.

Greyhounds will often happily chase a cat out of reach and then trot back tail wagging.

Overall, we don’t recommend Greyhounds for homes with cats or other small animals. Even smaller dogs may not be safe. 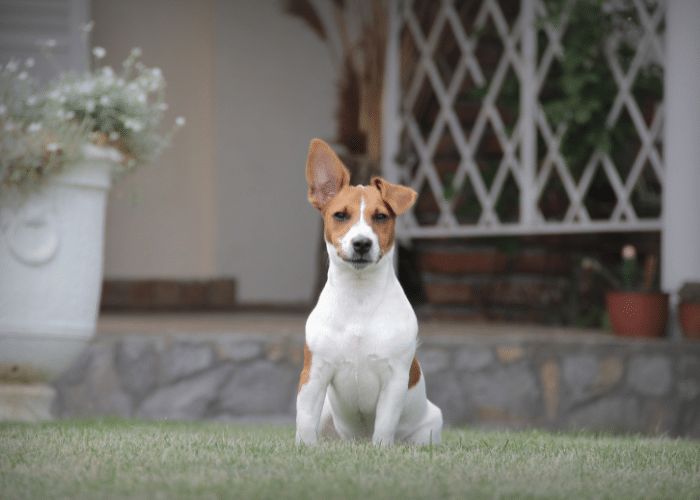 All terriers have powerful chase instincts. They were initially bred to chase small game, after all. Historically, these breeds could be found on farms protecting crops from animals like rats and rabbits.

The Jack Russell Terrier has one of the highest prey drives, though. They will assume just about anything their size or smaller is a prey animal and chase it.

They were initially bred to chase animals. It’s in their nature. You can’t train it out or socialize them enough to prevent it.

Even if a Jack Russell Terrier has been with cats their whole life, they’ll likely chase them when given the opportunity.

Luckily, this dog is smaller than most, so they often can’t do much damage to a cat. That doesn’t mean it’s safe to leave them with cats, though. Fights can and do break out, causing injuries on both sides. 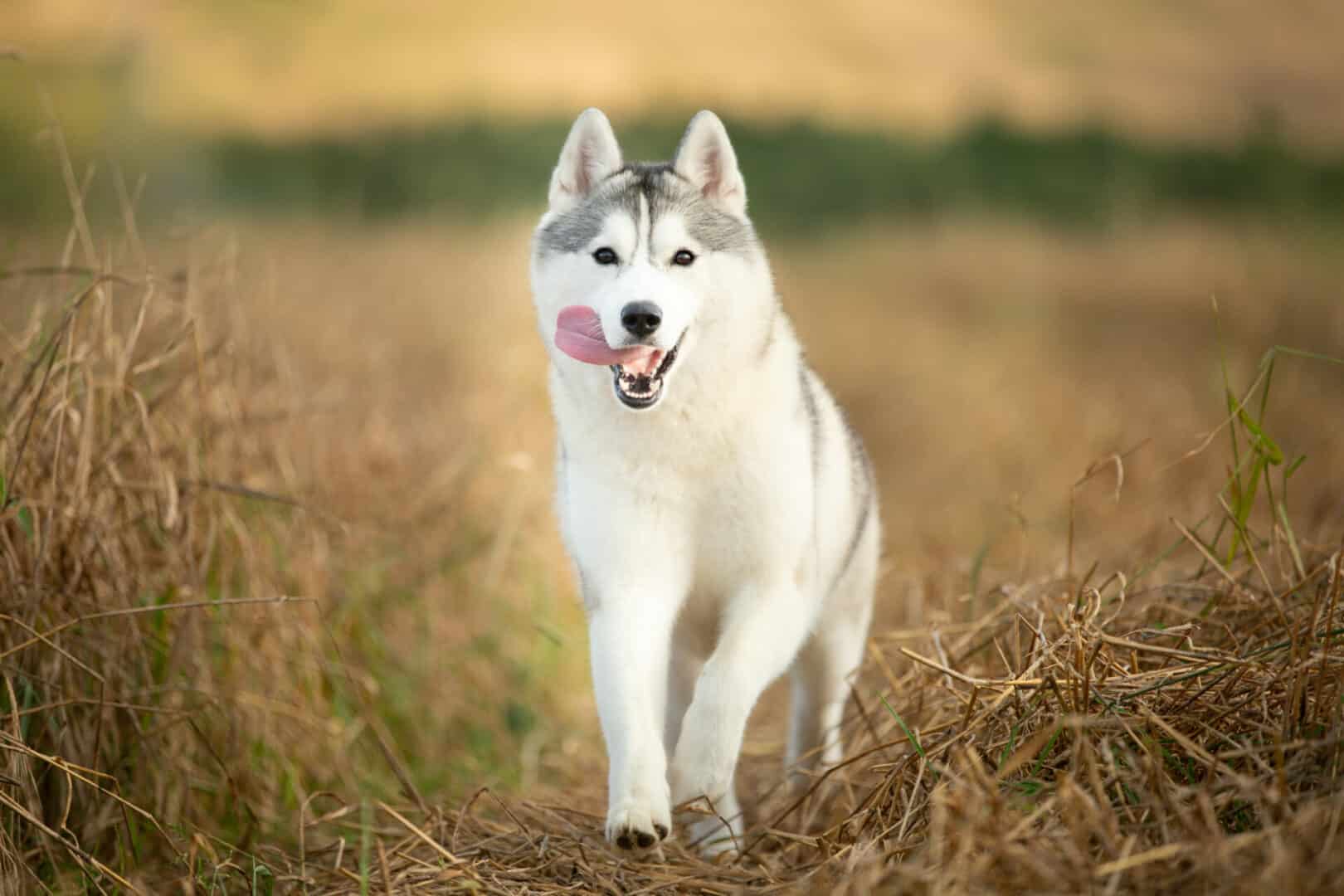 Huskies may look cute and fluffy, but they are faithful working dogs. As you might know, this breed was bred to pull sleds. However, they are also an all-around practical dog for the tundra and colder regions. Many were used for hunting as well as sled pulling.

Today, this breed has some intense chase instincts. They are sighthounds somewhat, though they aren’t as famous as some other sighthounds out there.

When they see something running, they will chase it. No amount of training or socializing around cats will stop them from chasing them.

Because of their large size, they can do quite a bit of damage. They also tend to chase single-mindedly, sometimes doing damage to your floor or furniture. 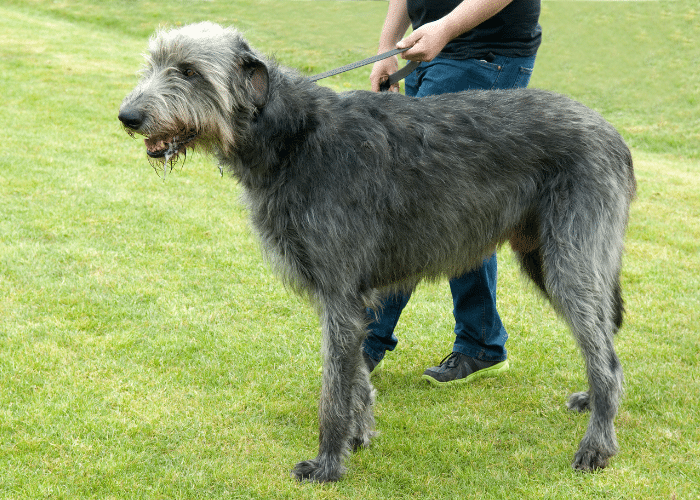 One of the largest hunting dogs in the world, the Irish Wolfhound is another sight dog. They were bred to chase things they saw running.

While their name reflects their usage hunting wolves, they could also take down larger game like deer. However, that doesn’t mean that they will only chase big things. Cats are absolutely on the menu too.

The main problem with this breed is its colossal size. If they do chase your cat, they can do a lot of damage. Imagine a 180 pounds dog running single-mindedly through your house. You could see how this would not be a good idea.

They are easily capable of reaching speeds up to a gallop! An Irish Wolfhound could easily outrun a cat – and is often tall enough to scale cat-safe structures as well. 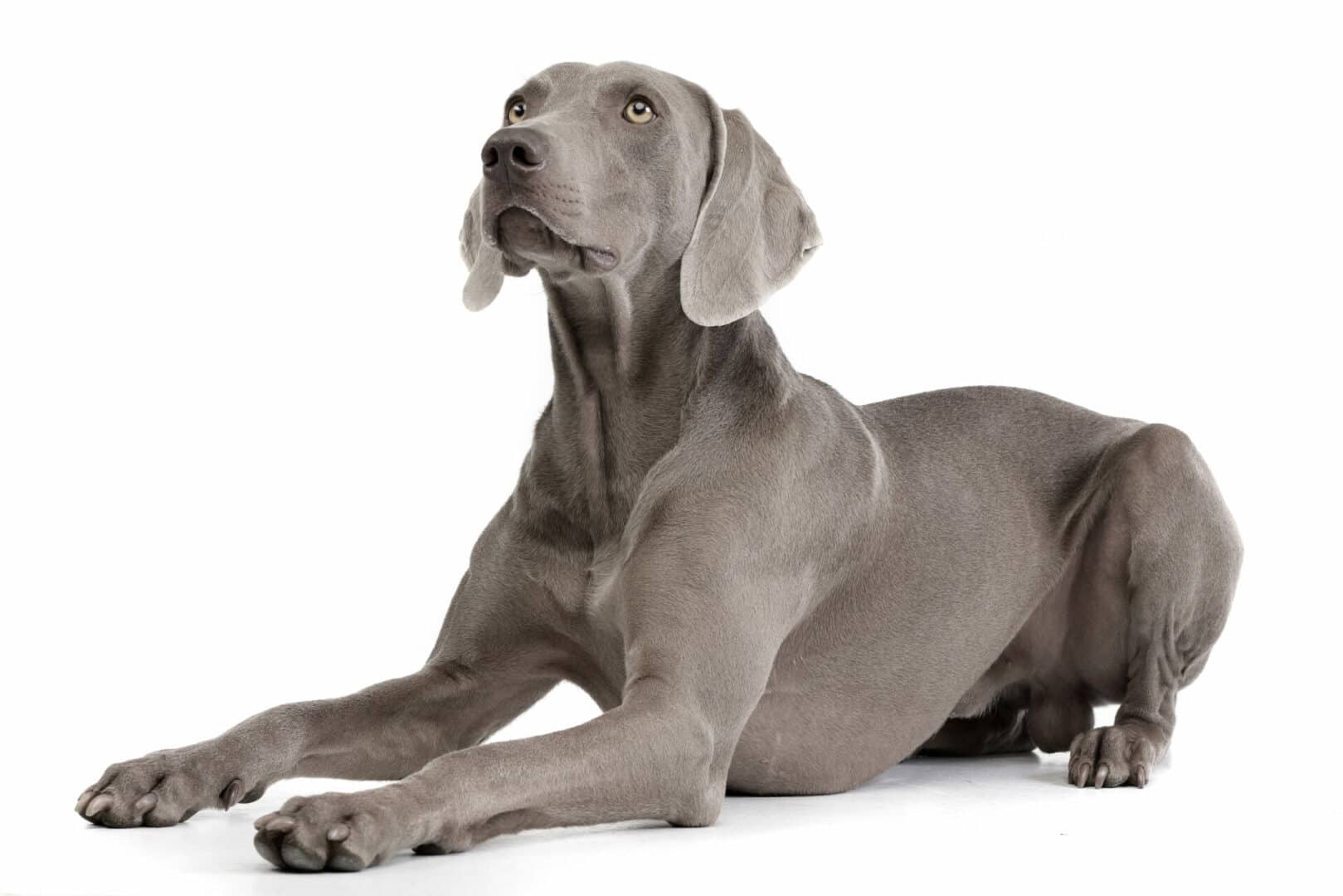 These dogs will chase just about anything – and it is challenging to stop them. For this reason, we don’t recommend them for homes with felines.

If you have a Weimaraner that has already been socialized with cats and gets along fine with them, you may feel comfortable enough to adopt a feline. However, we don’t recommend adopting a Weimaraner puppy if you already have a cat.

You don’t know how the puppy will react to the cat. And, by the time you do know, it’ll be too late. 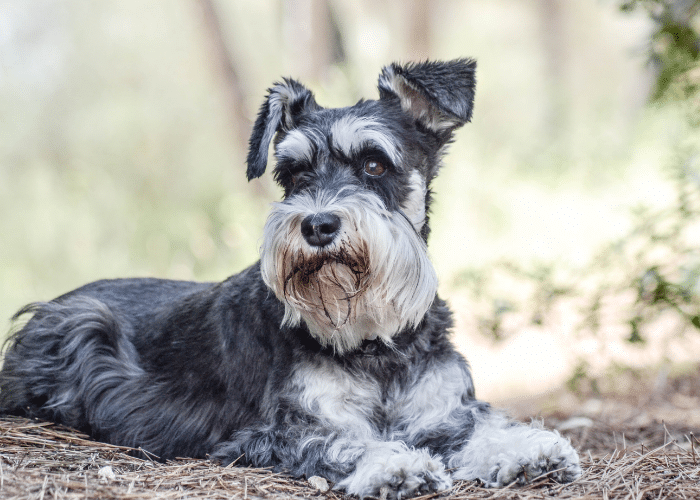 Any type of schnauzer is unsuitable in homes with cats. Technically, these aren’t hunting dogs. They’re guard dogs. However, they were initially bred to guard farmland from potential thieves and small animals like rabbits.

These guarding instincts often get directed at cats. They will chase cats – even if they don’t necessarily take off running first. Unlike other breeds, they don’t just chase things that are already running. They may seek out cats that they see as invaders.

They are brilliant dogs, but they aren’t the most trainable. Historically, they guarded by themselves without the help of an owner. Therefore, they didn’t need to follow commands. For the most part, they prefer to make their own decisions.

Most hunting dogs are not suitable in homes with cats. Their hunting instinct will often be carried over onto our feline friends.

Sighthounds are particularly bad for home with cats since they tend to chase anything that runs. Since they’re smaller than most dogs, cats are easily mistaken for prey.

Other dogs may be troublesome with cats, too, though. Canines that are designed to chase off small animals, like Schnauzers and Jack Russell Terriers, also tend to chase cats.

The main problem with these breeds is that you can’t train them not to chase cats. Nearly any breed of dog will chase a cat if they are not socialized and trained correctly. However, this isn’t necessarily true for the dogs we’ve mentioned in this article.

You can’t train them not to chase anything – that’s the problem.

If you have a cat in your house or plan on adopting one in the future, we recommend avoiding these breeds.

Steffi Trott is the owner and founder of SpiritDog Training. Originally training dogs in-person, she added online training in 2018 to her business. Steffi strives to provide game-based, positive training solutions for owners and their dogs. When she is not training other owners’ dogs she competes in dog agility or hikes in the New Mexico and Colorado wilderness with her own 4 dogs.

Feline 411: All About The Balinese Cat Breed

How To Train Your Cat To Sit

How To Tell When Your Cat Is Too...