For decades, there have been all sort of stereotypes surrounding crazy cat ladies. But thankfully, we live in a modern day and age which has shed new light on another type of cat owner: the cat dad! And when it comes to cool cat dads, there are millions of them across the globe.

For some crazy cat gents, cats didn’t always have a special spot in their hearts. But, as we cat lovers know all too well, that simply means they haven’t met the right cat yet!

Cats are effortlessly charming beings, and all it takes sometimes is that one special cat—or two—to change your whole purrspective on life. And, not only that, but it makes your world a whole better place, too! 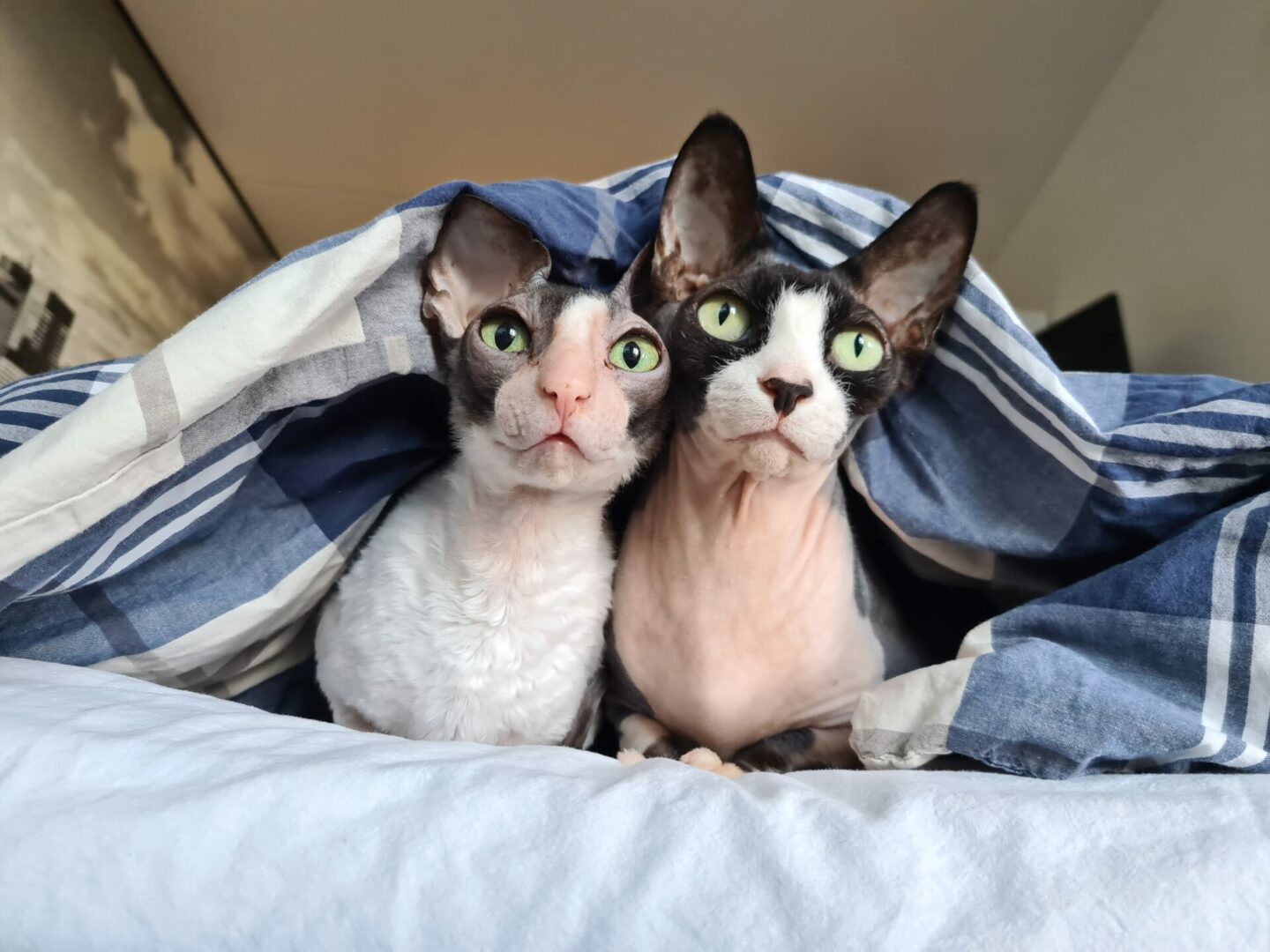 For Niklas Lundström, a correctional officer in Sweden, he’s the proud cat dad to two super cool cats, Cooper and Kira (both 9 years of age). Cooper, a handsome Sphynx, and Kira, a precious Cornish Rex. But Niklas wasn’t always the super cat lover that he is today. But, like I mentioned above, he hadn’t met Cooper and Kira yet! Now, he spends his free time hanging with his cool cats, and thankfully for us, he loves showing them off to the world.

I caught up with Niklas hoping to feature his lovely cats on Cattitude Daily, so keep reading to learn all about these interesting cats who are here to prove just how awesome “naked” cats can be.

How did each of your kitties get their name?

Cooper’s name in pedigree was S*Beau Monde Cooper. I had not really decided on Cooper’s name before he moved in. But when I saw him, I thought Cooper was perfect for him and I love the character in The Big Bang Theory, Sheldon Cooper. Therefore, the choice became even easier to keep Cooper. Kira’s name in the pedigree was S*Pemico’s Marry the Night (after Lady Gaga). I don’t really know if there is a story behind the name Kira, because it was my ex-girlfriend who chose that name. But from what I understand, she liked the name “Kira”. 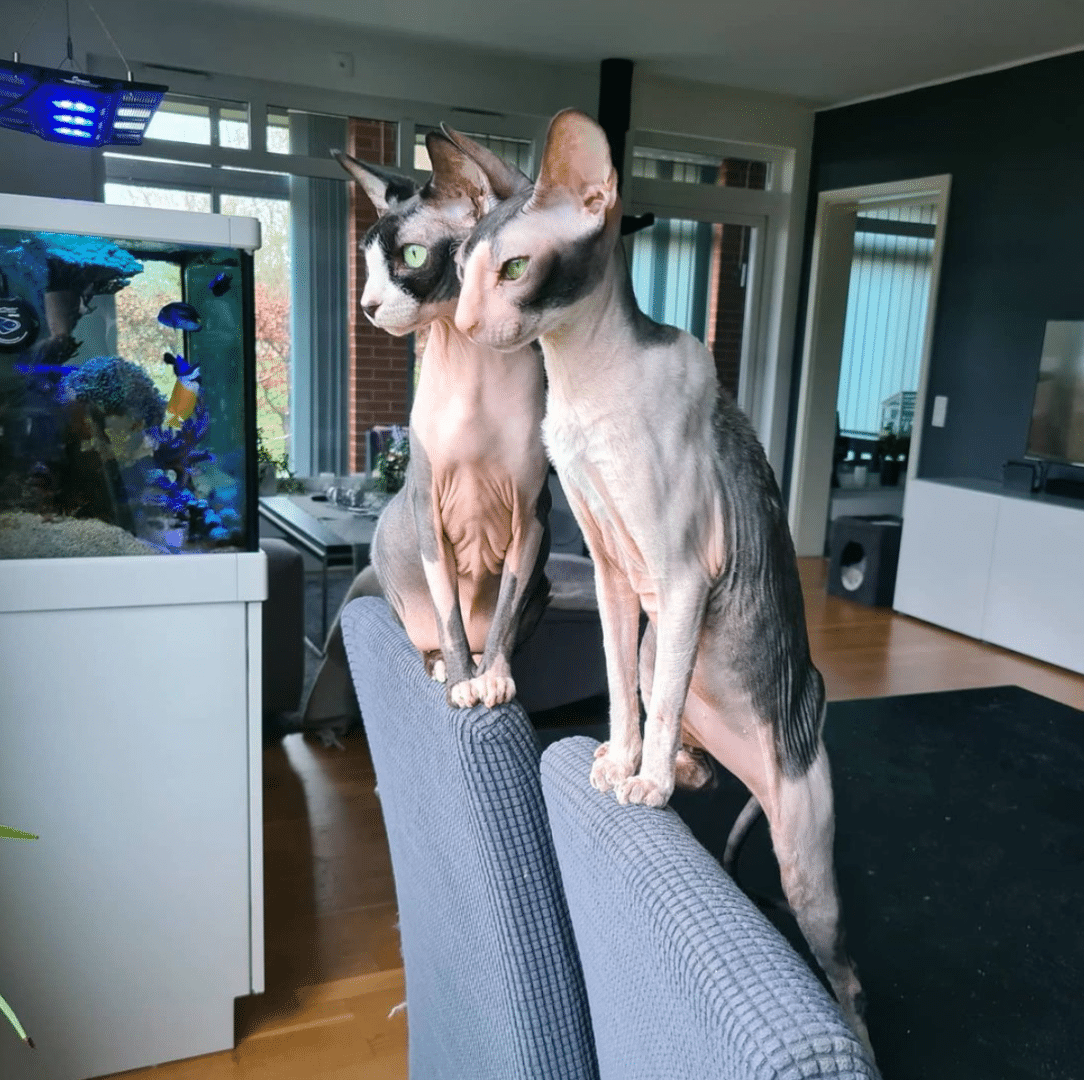 When Cooper moved in with me in 2012, I immediately noticed that he was a tough cat and he was not afraid of anything. He was extremely curious and like I said, not afraid of anything. That combination is not always so good when you are a kitten. He would run straight up to dogs that weighed 50 kg (110lb) more than him. His wild games ended up with him running into both doors and walls which then ended at the vet with tooth extractions. Fortunately, he has calmed down a bit as an adult, but he still has extreme energy even for an older cat. 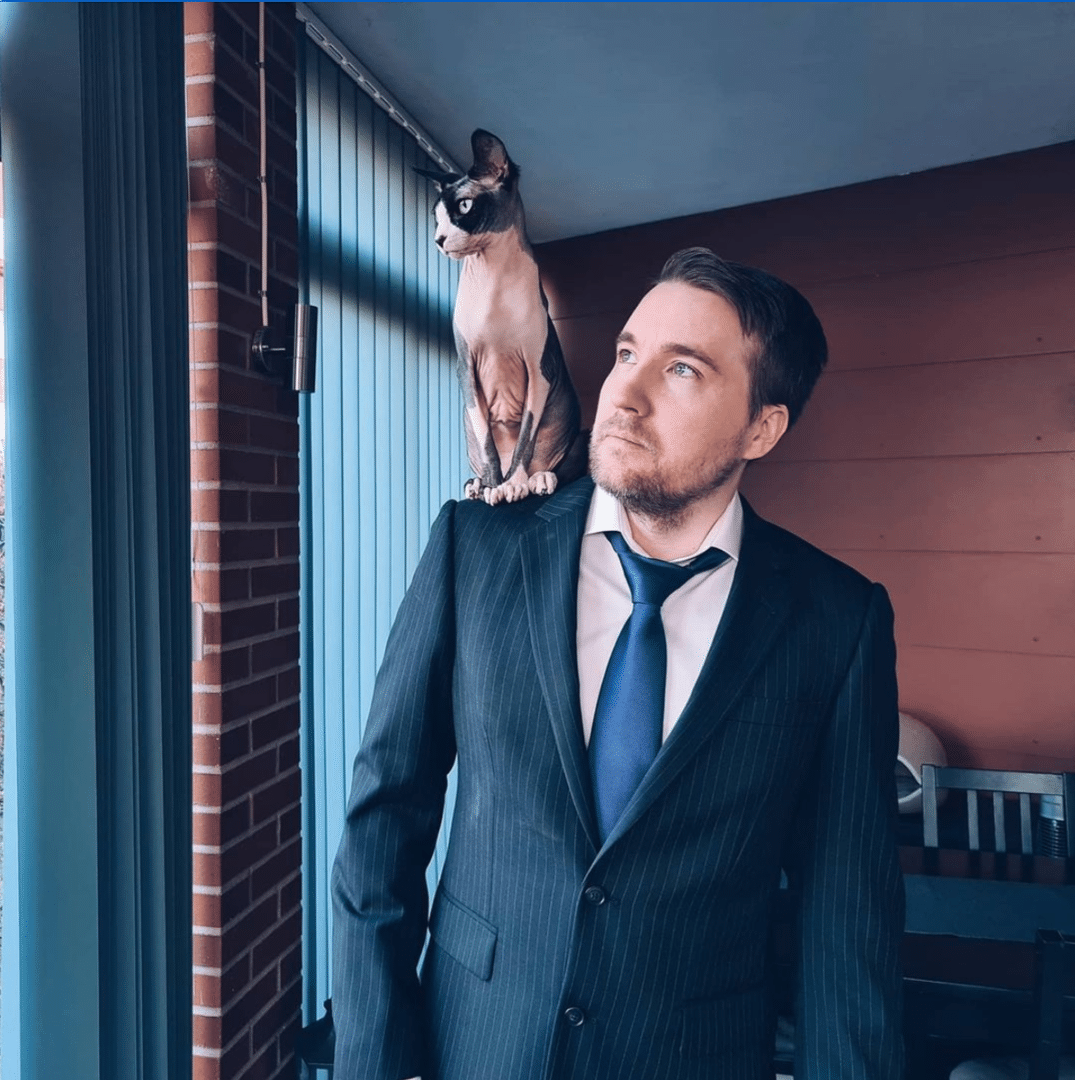 Cooper is a very social cat and always wants to be where something happens. When people are coming home to us, Cooper comes flying like a rocket through the apartment to say “hello”. He is very talkative and after all these years together (9 years) I have started to understand what he wants when he talks to me. Sometimes it’s about the food bowl being empty and other times he thinks he is getting too little attention.

Kira was scared when she was a kitten. She was rejected by her cat family and never really got to experience what it is like to be a kitten. When I was going to meet Kira for the first time, she hid for 1-2 hours, but then she came flying across the floor and sat on my shoulder. The breeders looked at each other in surprise and said “This has never happened before”. Today, Kira is a social cat who also wants to be in the centre of attention. She can still get a little worried when everything is not as usual, but with Cooper by her side, she handles all situations excellently.

I see that Cooper REALLY loves water—how did you discover this?

I noticed Cooper’s love of water almost immediately. He was a young kitten when he first showed interest in water. When I was going to take a bath, he sat on the edge and splashed in the water with his paws. He started playing with water everywhere, in the drinking glasses, in the pots (with cold water) he also tried to play with the water in the watering can. One day while I was bathing, he jumped in the tub and continued splashing in the water. Since then, almost 9 years ago, Cooper has taken a bath almost every Sunday. 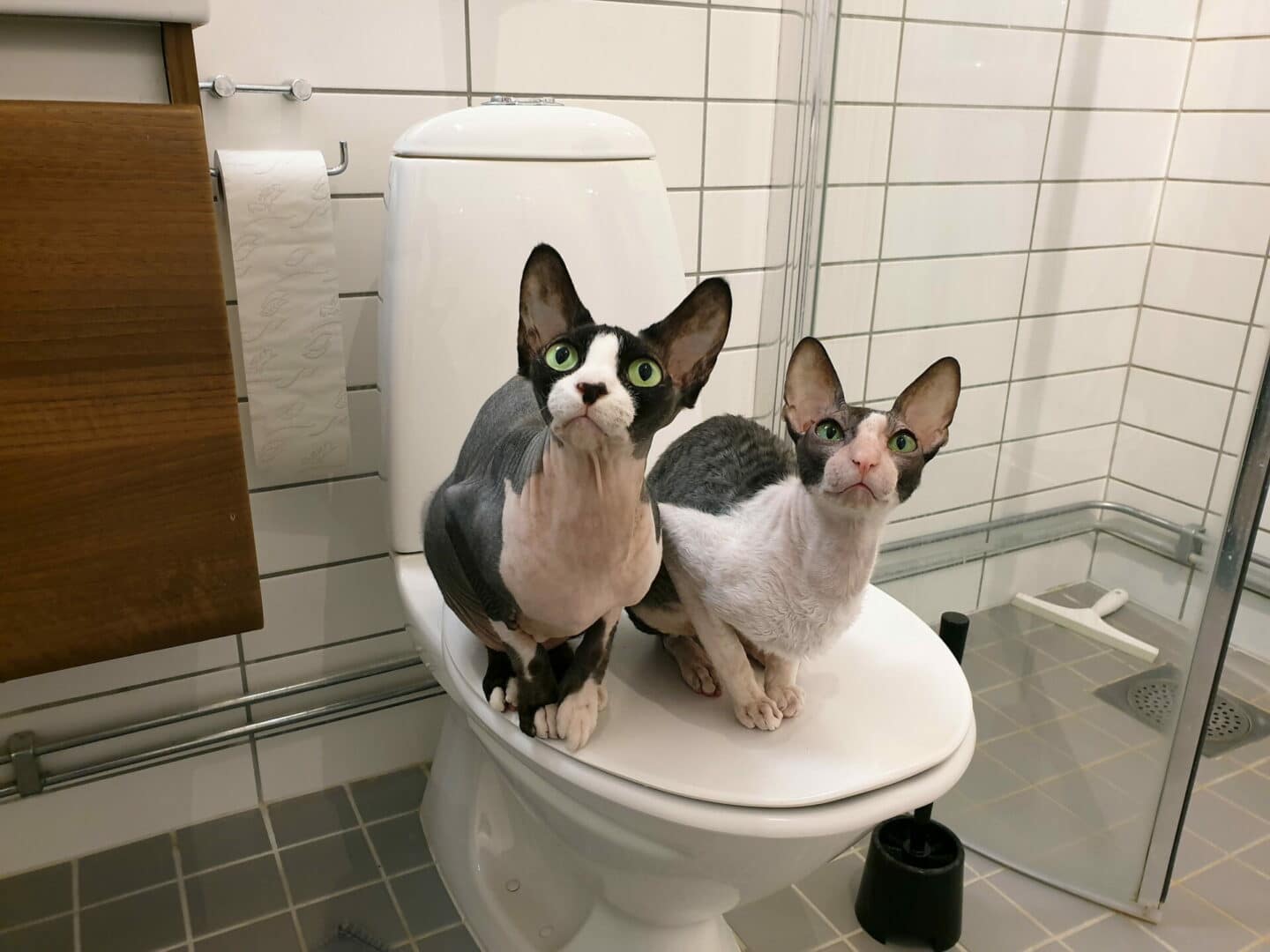 Cooper and Kira are inseparable. They are so interdependent in many different ways. But above all, Kira needs her beloved Cooper to feel safe. He is the one who raised her to who she is today. When Cooper goes to the vet, Kira walks around searching and screaming after Cooper in search of him.

I am so incredibly happy to be a part of their lives and to see the love they give to each other—and to me. They always sleep together, in bed, on the couch, on chairs and in their cage. I’ve never seen two animals play with each other as much as they do. Something very rare is that they also “hunt” together, which is quite unique because cats aren’t really herd animals. They work together to catch both spiders and flies in the apartment and then they share the ”food”. 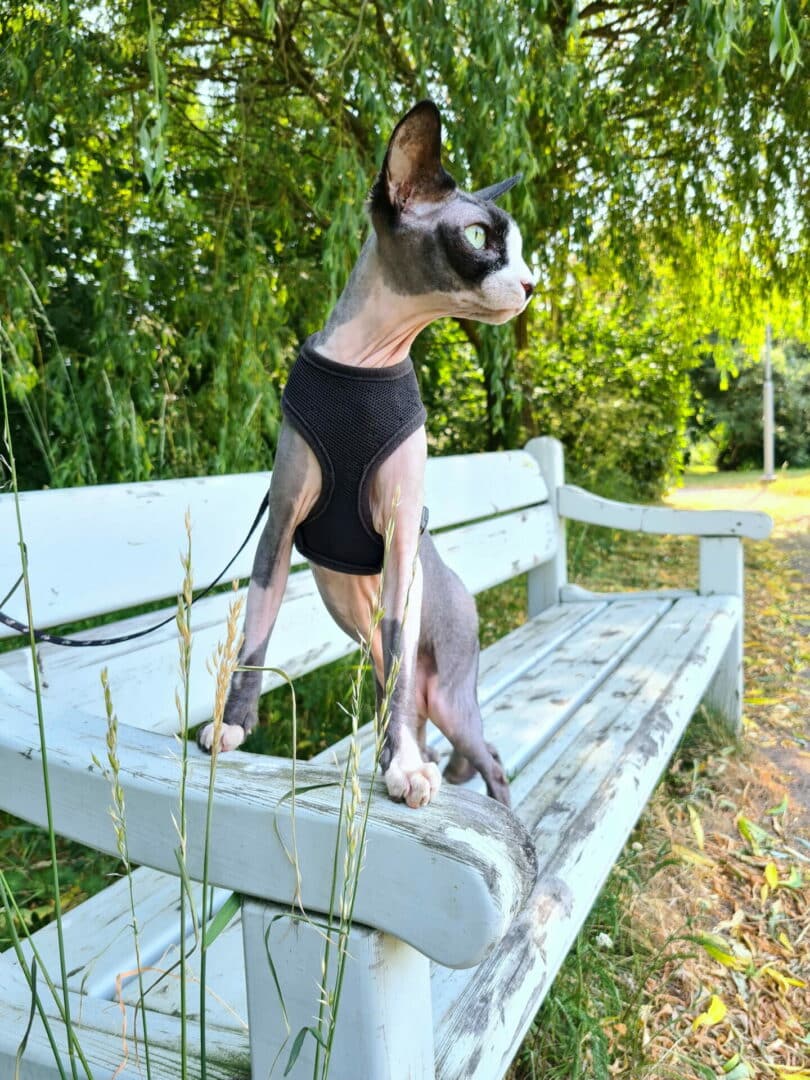 How do people respond when they see you out with your cats?

Many people ask me who’s in charge in their relationship, but I would say that they are very equal. Cooper probably thinks he’s in charge, but that’s not the truth. (haha)

Cooper and Kira love to be outdoors. We usually go down to the beach and the forest. Usually I don’t need to have a harness on them because they never leave me. But if there are a lot of dogs, I have a harness for their safety, both Cooper and Kira go perfectly in a harness. When people see us, most people are very curious.

The most common question we usually get when we are outdoors is, “What kind of cat is it?”

Most people are pleasantly surprised when they meet Cooper and Kira, that they are so social and curious. There are also people we have met who said “cute dogs” upon seeing them. There are always people with a sad attitude who think it is animal cruelty with naked cats. I don’t spend so much time on those people because they are not going to change their attitude and opinion. But 99% of everyone who meets us are curious and positive. 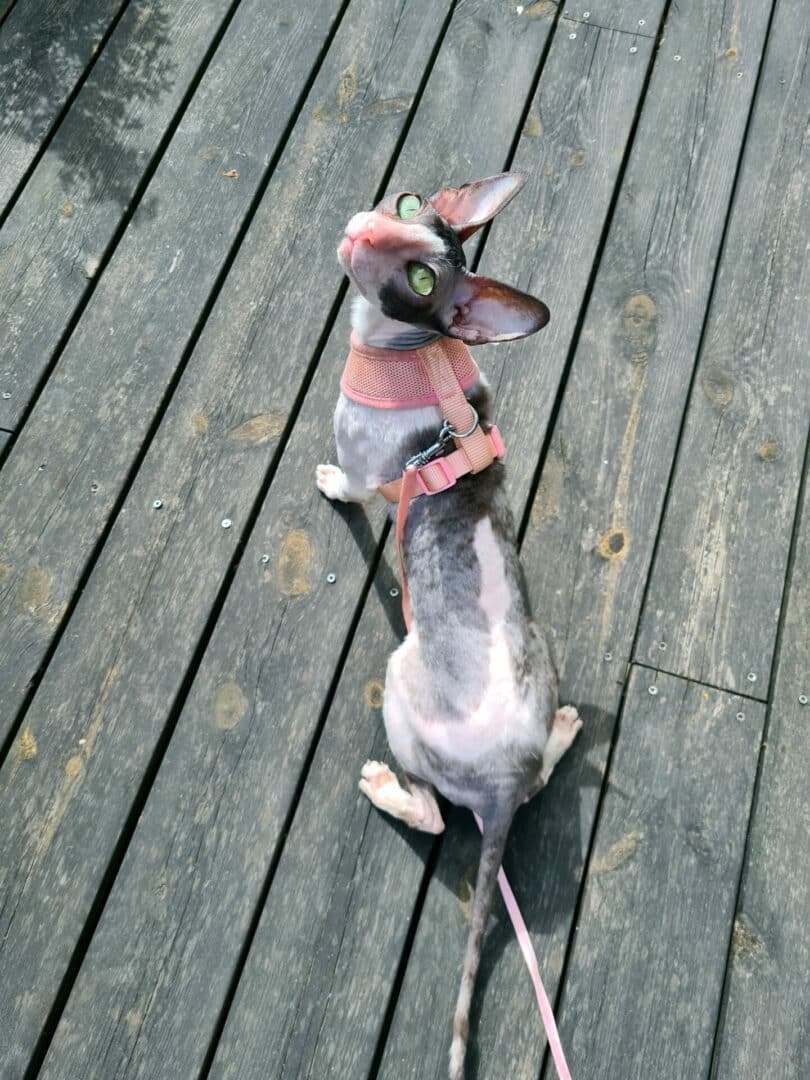 What’s something special you’d like people to know about Cooper and Kira?

The most important thing on our Instagram is to show the world how wonderful naked cats are. That differences don’t have to be a weakness, but rather a strength.

I’d like to give a special “thank you” to Niklas for allowing me to share Cooper and Kira’s story and images with all of the Cattitude Daily readers. If you know another cat lover who would enjoy learning about them, don’t forget to share. 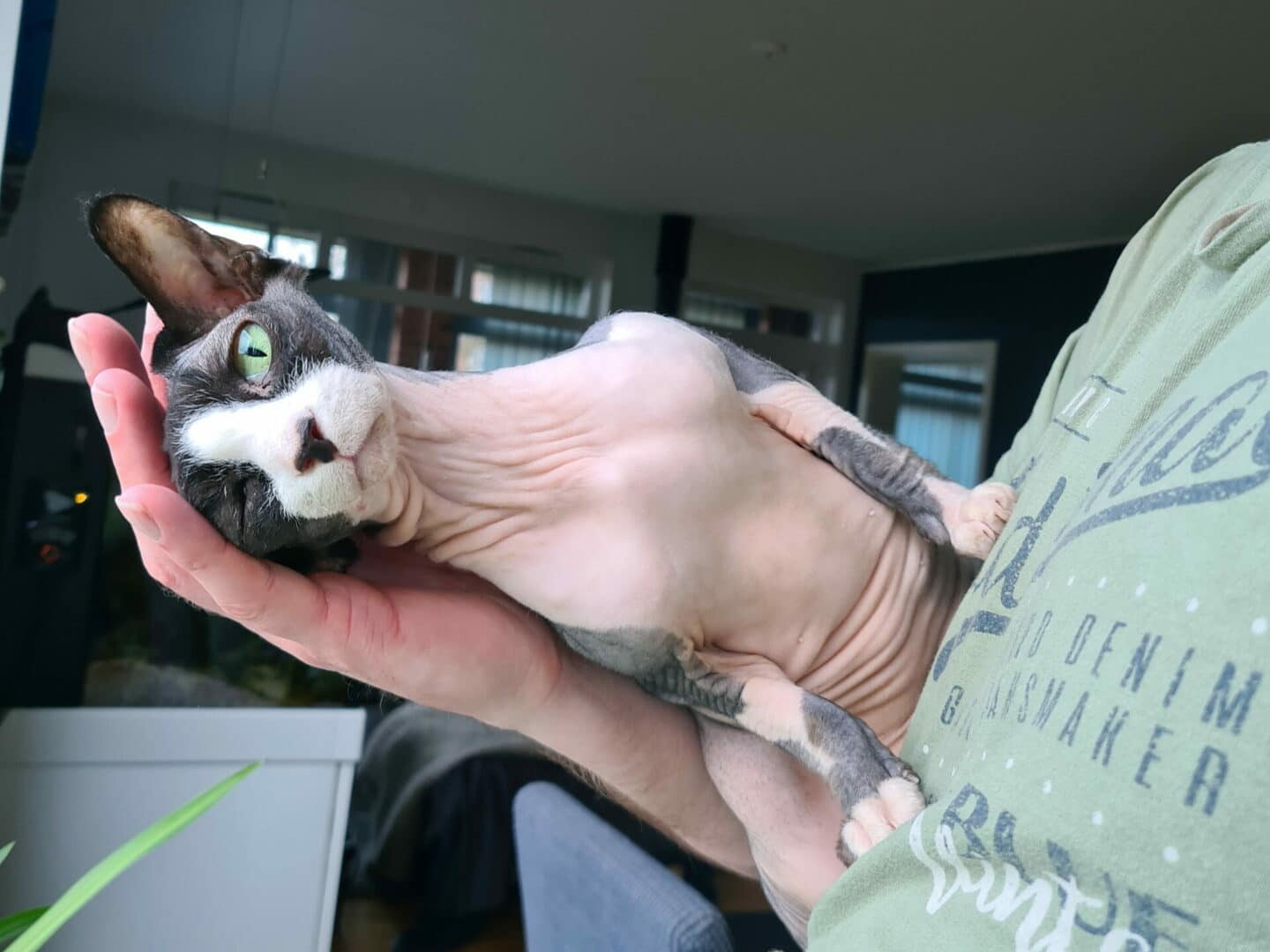 All Images Courtesy and Copyright of Sphynxnille on Instagram

How To Gain The Trust of A Feral Cat