Cookie The Big Cat Mistaken For Mountain Lion In D.C.

Although we live in a time when there are still some big cats roaming freely in the United States, the thought of a mountain lion strolling the city streets of Washington, D.C. seems highly unlikely–not to mention alarming. So when Georgetown resident Giulia di Marzo checked her home security feed and saw a large cat jump on her fence, she wasn’t sure what to think. The cat certainly looked larger than any house cat she’d seen before. She took to the Internet for advice, and true to 21st century social media, things quickly (and hilariously) got out of control.

Di Marzo ended up posting the alarming security video onto a neighborhood blog. She said she’s used to seeing deer and even the occasional fox at the nearby Rock Creek Park, but a mountain lion was a different story. She posted to the page saying,

She then asked her neighbors for help identifying the mystery animal.

Many people responded saying they agreed the big cat looked like a mountain lion. Neighbors started expressing safety concerns and worry for their pets. It didn’t take long for the media to get a hold of the story. The idea of a possible mountain lion in Georgetown ended up in the news.

That’s how Georgetown veterinarian Lee Morgan first heard about it. Morgan and a few coworkers decided to take a closer look at the video, and their ultimate conclusion was that the animal was NOT a mountain lion. He said the cat in question had stripes on its tail, and its paws were too small. And with the average mountain lion weighing 150 pounds, the cat in the video didn’t look bulky enough.

In a classic case of explainable serendipity, a few minutes after this conversation, Morgan’s office received a phone call.

The call was from a woman who said the cat in the “mountain lion” video was actually her rescue cat named Cookie. She said she recognized the markings on the cat’s tail. Why she called the vet’s office is unclear, but she was confident that it was Cookie causing all the trouble. 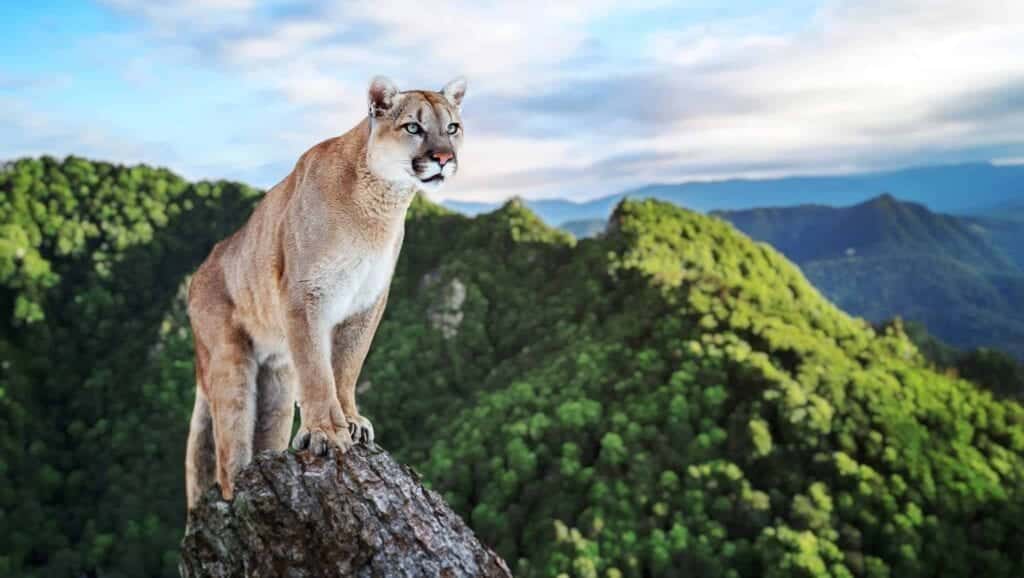 An incredible shot of a mountain lion in the wild

Morgan had treated Cookie in the past and told The Washington Post he remembered the cat as being long and lean. He might be a bit bigger than the average house cat but nowhere near the size of a mountain lion. Morgan and his staff had a nice laugh and called the news station with their discovery.

Morgan wasn’t the only professional to take a closer look at di Marzo’s video. City officials, wildlife biologists, and experts from the National Zoo also studied the short clip. They all agreed the now-famous feline was “magnified by the camera” and was nothing more than a roaming tabby cat.

When di Marzo heard the news, she was surprised that the big cat supposedly lived nearby. But she was mostly relieved that she didn’t need to worry about mountain lions attacking on her city street. Even with the mystery allegedly solved, however, her original post is still getting a lot of attention. She said she’s received countless phone calls, emails, and comments. Some of those messages are from people trying to convince her that despite what experts say, the cat in the video really was a mountain lion. She said,

“It was such an innocent blog post that went so crazy. All we wanted was for someone to say, ‘That’s our neighbor’s cat.’ I do hope it’s Cookie.”