Colony Of Feral Tuxedo Cats Find Hope Thanks To These Women

The life of a stray cat is no life at all. And the life of a feral cat is even harder. When cats are kittens, they learn the proper social skills they need and become closely bonded with humans. But for feral cats, humans are not perceived in a way that’s trusting. Most feral cats are extremely skittish and always on guard. These are cats which much fight for dominance, food, and shelter. 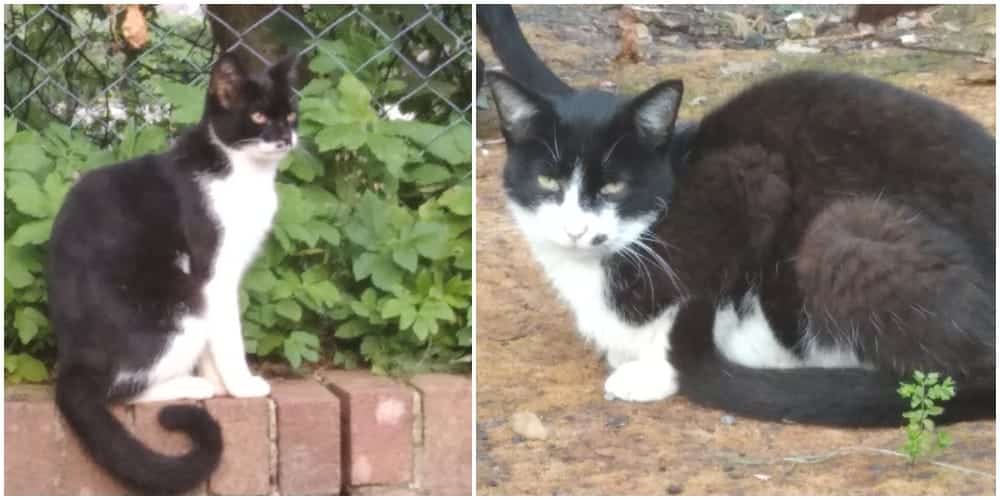 For a colony of feral cats—most of which are tuxedo—out of County Kildare, Ireland just west of Dublin, they’ve found a two women with hearts of gold to give them all the kindness, care, and food they could ever ask for. I caught up with Elle, the younger lady caregiver of the tuxedo cat colony, and asked her some questions about her pretty clowder of mostly two-toned kitties.

And by the looks of it, all 28 of them are pretty happy! 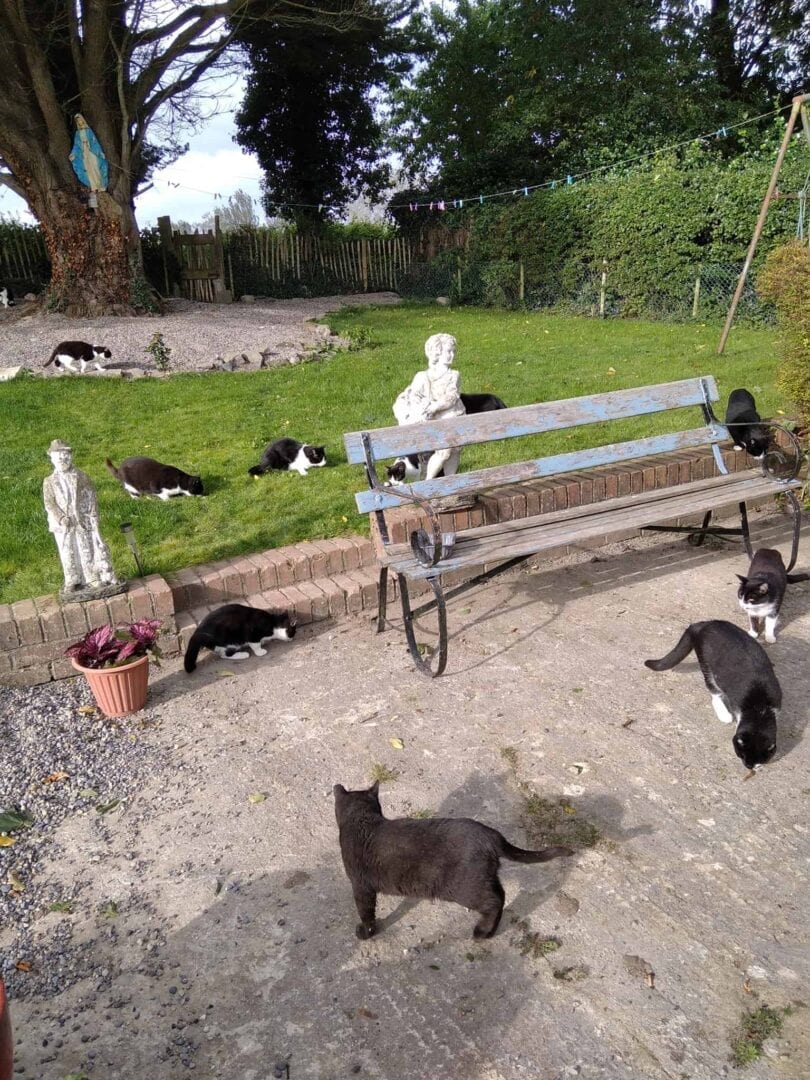 When did you start caring for these feral cats?

I’ve looked after ferals ever since I can remember, but this particular colony first started 12 years ago at the quarry behind my aunt’s house, so she’s the one who’s been caring for them since then. She had a mild stroke 4 years ago so I moved back to Ireland to help her out. That’s when I caught and had the initial 12 neutered and spayed.

In past two years, more have turned up that are very wild so it’s taken a lot of time to get them to trust us and then to trap and neuter/ spay. Some had kittens in this time that I was able to tame. ( I’ve two left that I’m looking for perfect homes for.)

And, like any good cat moms would, Elle and her aunt have names for their many kitties they’ve grown to love.

This little cutie here is Chica. Elle told me, “Chica is brilliant, she comes into the house and looks for pets n cuddles but won’t stay in at night. She had 3 kittens and was foster mum to another 9.” 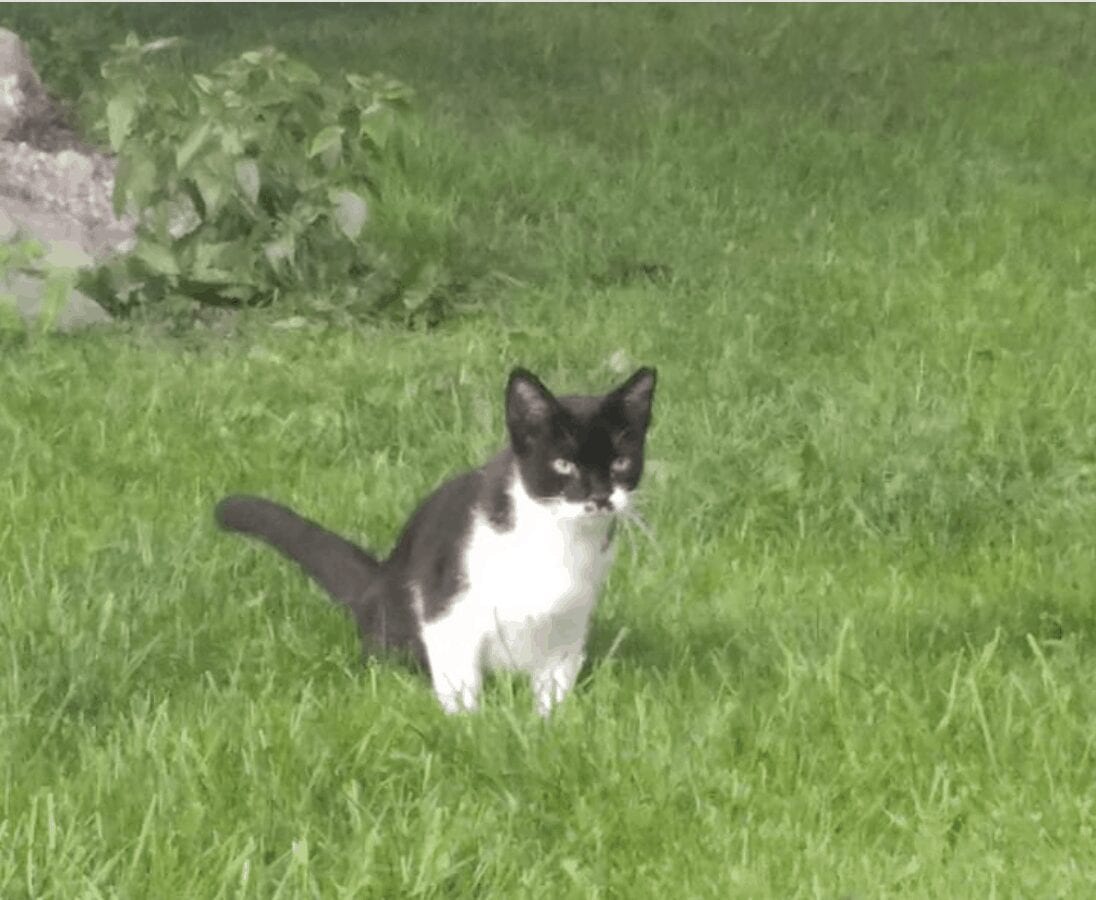 And Remington, a cat who was once very down on his luck, now has a great life thanks to Elle who learned of his plight and sought him out, knowing that she could nurse him back to help. Remington was in horrible shape, but after just a month, on the right, you can see the dramatic difference he made thanks to her loving touch!

“I took him straight to the vet and his hair had become so matted that it had caught in something and ripped off to the skin plus he had a couple of bad teeth with abscess so he was in a lot of pain. He came home with me and hopped straight up on my bed.” 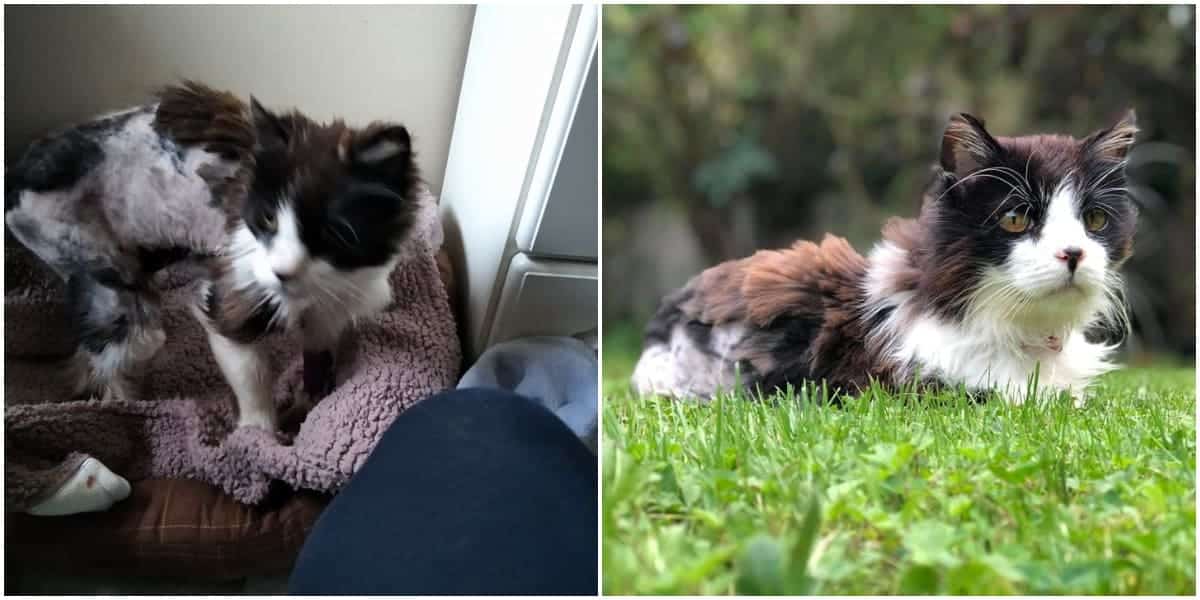 Once he was nursed back to health and used to being around humans, the time came for him to land a forever home. And now, he spends his days being pampered and adored–just as he should! 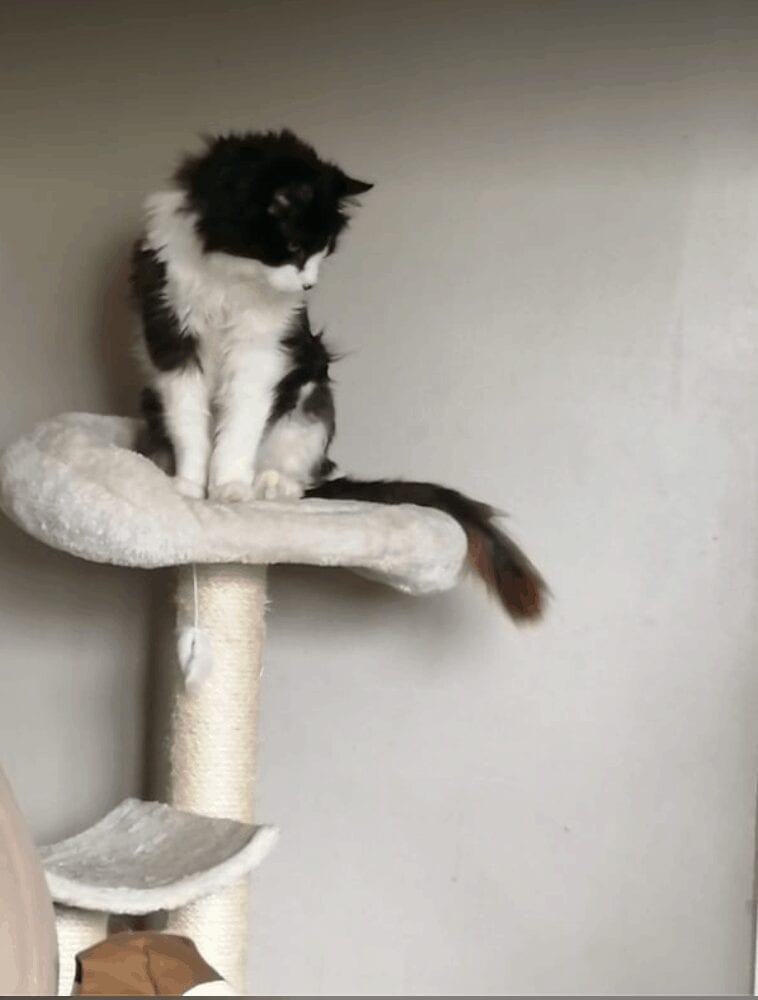 There are some which stay with the women who don’t go on to other homes. This includes Sairose, Ziggy, Agatha, Rolly, Moet, Yaiza, Chubb, Dante, Grayson, Shamie, Chubb, Indy,  BumbleB,  and Boxer—just to name a few! 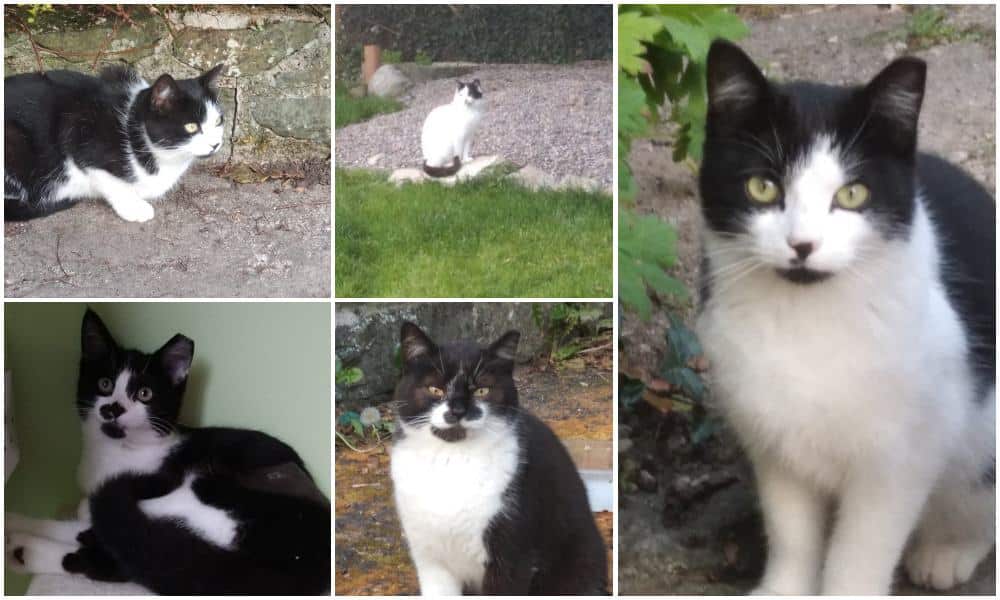 So, how is it that all these cats keep winding up at their home—aside from cats naturally having a sixth sense to spot out good people? Well, Elle tells me that “they have a quarry behind us which appears to be a dumping ground for unwanted kittens, that’s where they come from. We did put big dog kennels out there a few years ago which I have insulated with thick cardboard and hay for bedding in them.”

The cats pretty much claim the garden as their own, some transition to a life as an indoor/outdoor cat, and Elle is also proactive about TNR efforts for them. In addition to this, they work to find good homes for the kittens which come along before the incoming ferals have a chance to be spayed/neutered.

Elle tells me that,

“They now prefer to spend nights and a lot of the day in our back garden, which is large so we have moved the kennels into garden and are now looking for the perfect spot to put them. So it’s safe & sheltered from weather. They are fed in the morning and in the evening.” 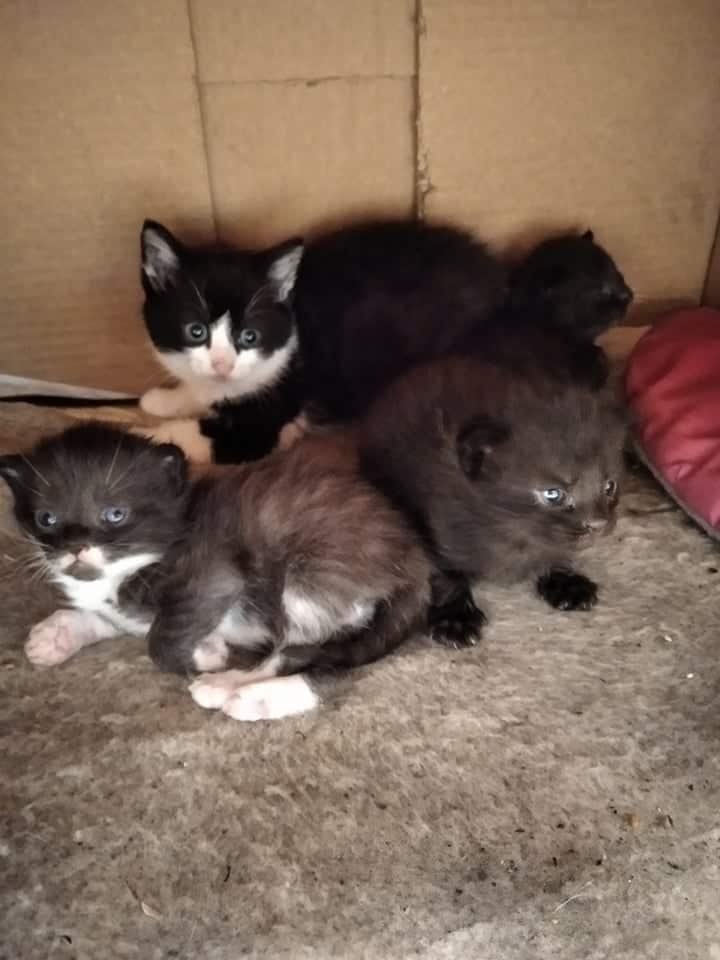 And when it comes time for their meds, like worming and flea preventative, Elle has developed the perfect method to get them to be good boys and girls and take their medicine…by wrapping it in a piece of sausage that’s quickly gobbled up.

When she’s not busy caring for her feral colony, Elle also lends her time to help with adoption events for kitties in search of forever homes. I’d like to give a special “thank you” to Elle and her aunt for allowing me to share the story of their “Cat Club” with all of the Cattitude Daily readers. It seems that any cat that crosses their path is a lucky one for sure.

If you know someone who has a soft spot in their heart for feral and stray cats, share this article with them to bring a smile to their face.

Why Do Some Cats Have Such Long Whiskers?