If you ask me, all cats are beautiful. It doesn’t matter what their coat looks like, or their tail, or even their face. For Odin, Loki, and Shadow, I honestly got teary-eyed when I came across their profile. I was instantly smitten with this sweet trio of kitties that are living out their very best nine lives together in Switzerland. And although they’re a bit different than your average cat because of their vision impairments, you cannot help but love and marvel at their effortless beauty.

I’ve always had a soft spot in my heart for special needs cats, and I especially love those cat lovers out there who make it their mission to take in these cats and treat them as if they’re no different than any other cat. Because, after all, every cat deserves a chance to be loved—no matter what. 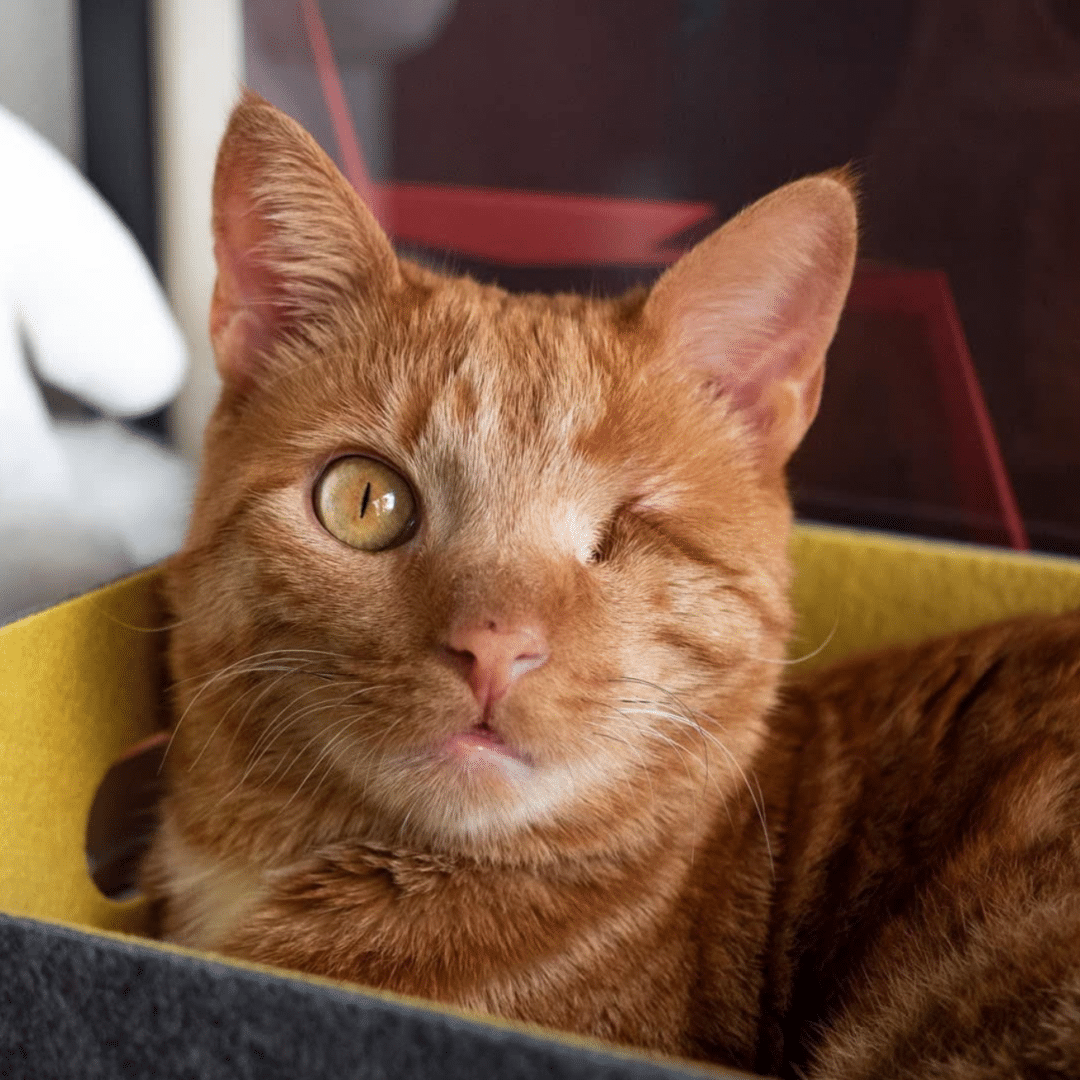 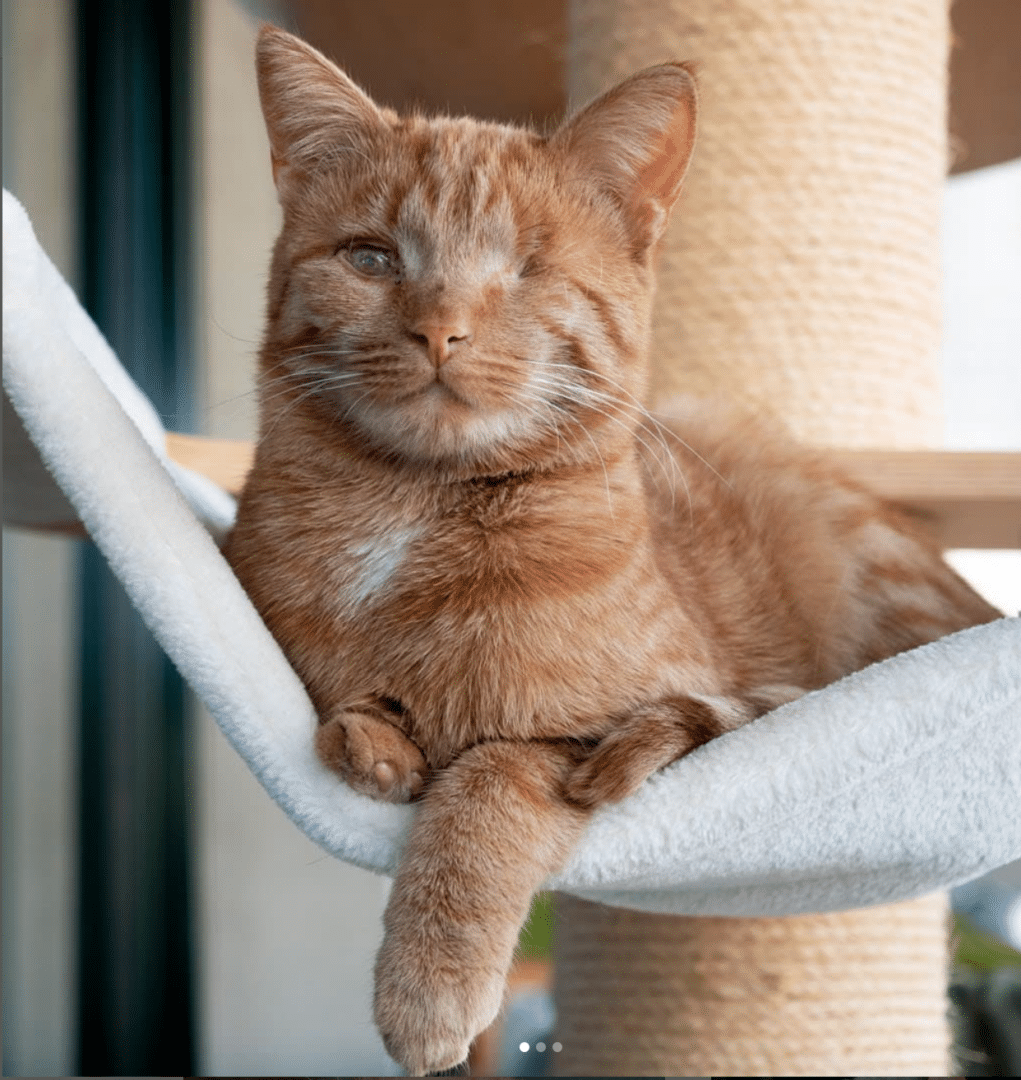 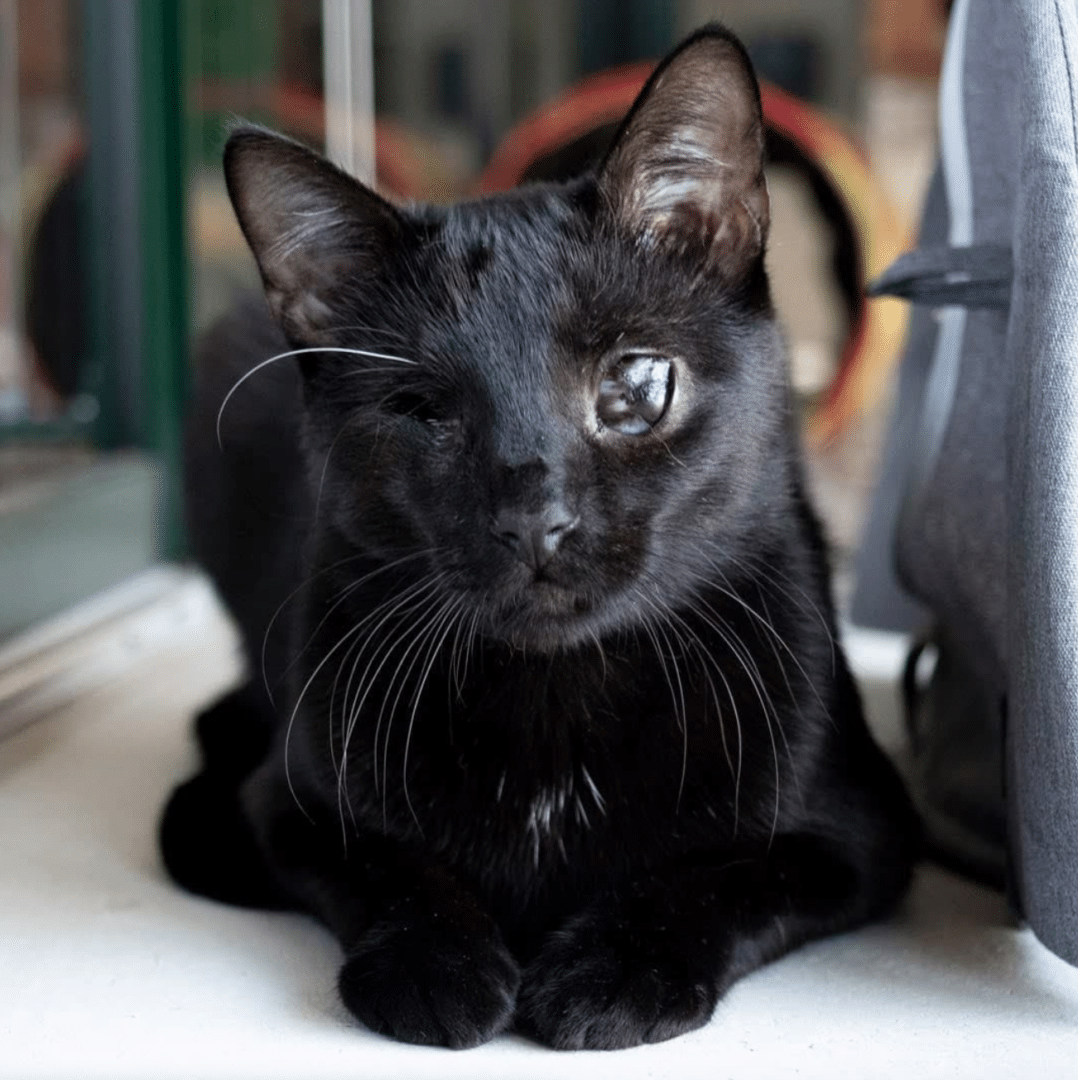 How did Odin, Loki, and Shadow come into your life?

In late 2020, my partner and I went to a local rescue and met a litter of four kittens who had been found on a farm with badly infected eyes. Two of them were blind, two still had a good eye.

We looked up caring for blind cats and found a lot of scary articles that made it seem complicated. So we adopted the two one-eyed kittens and named them Odin and Hana. Someone else adopted their blind siblings.

Sadly, half a year later our little Hana passed away from a sudden illness. We reached out to the rescue to find a friend for Odin. To our shock, they said his original blind littermates had just been returned!

We still didn’t want blind cats, let alone three cats. But when we went to the rescue to choose another kitten, we met the blindies. They were so sweet that the decision made itself. 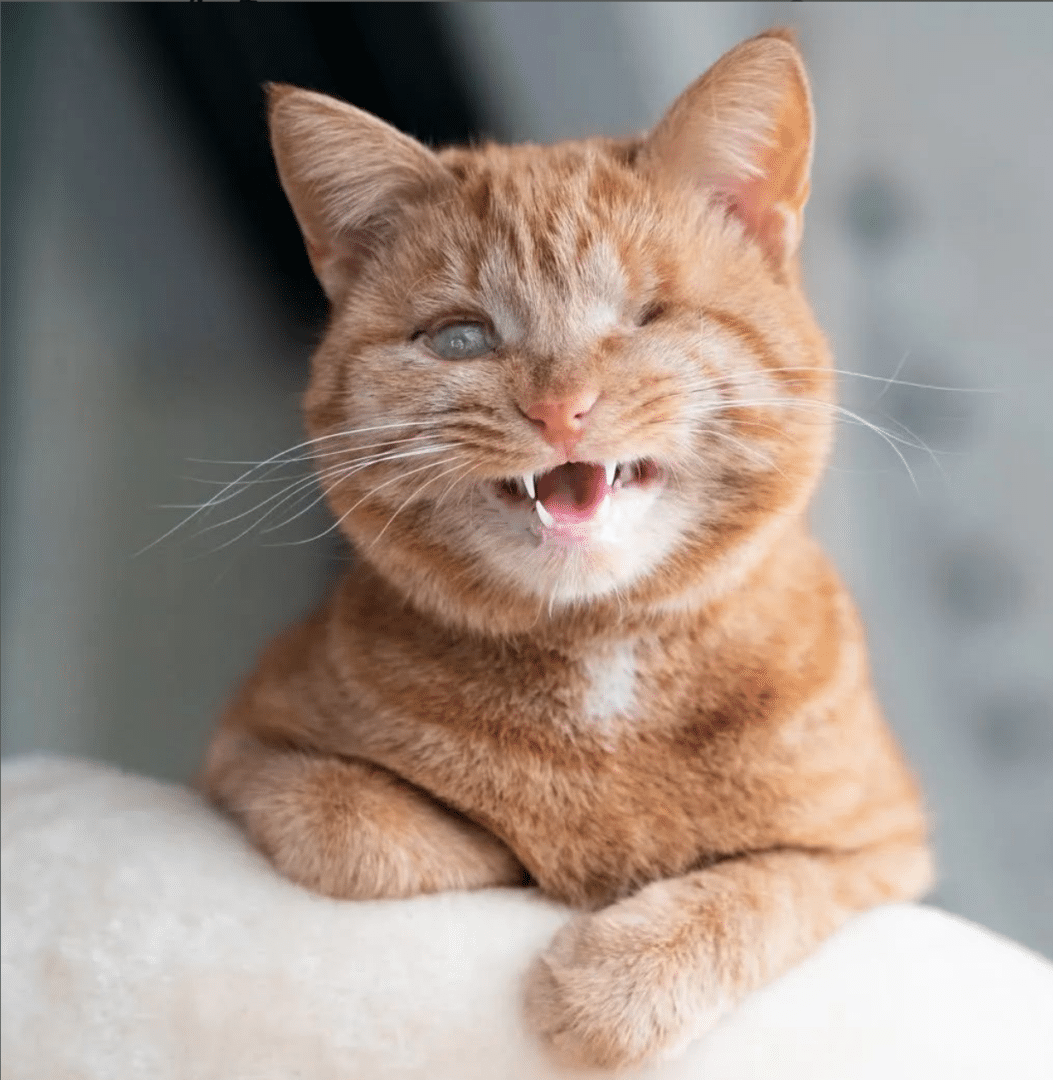 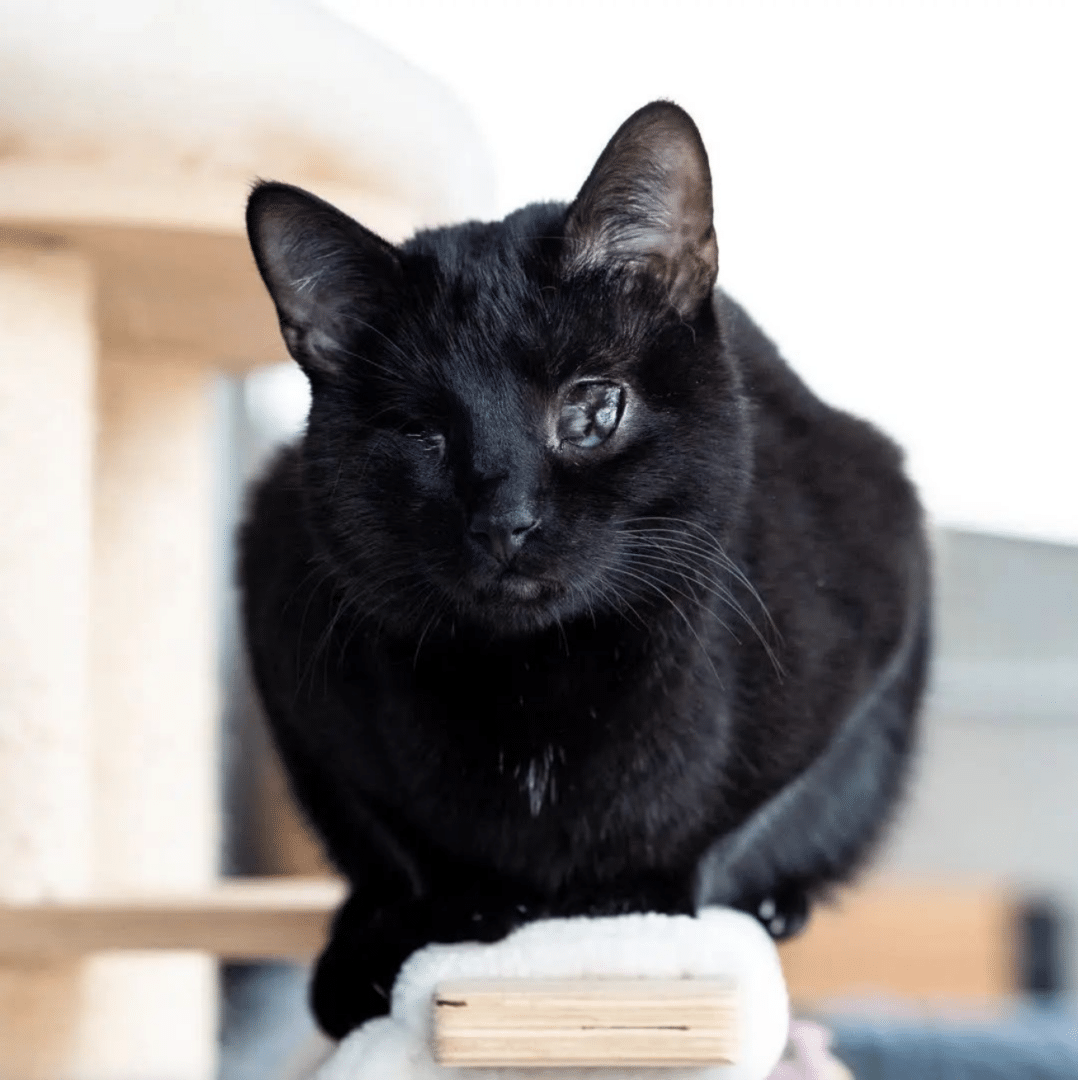 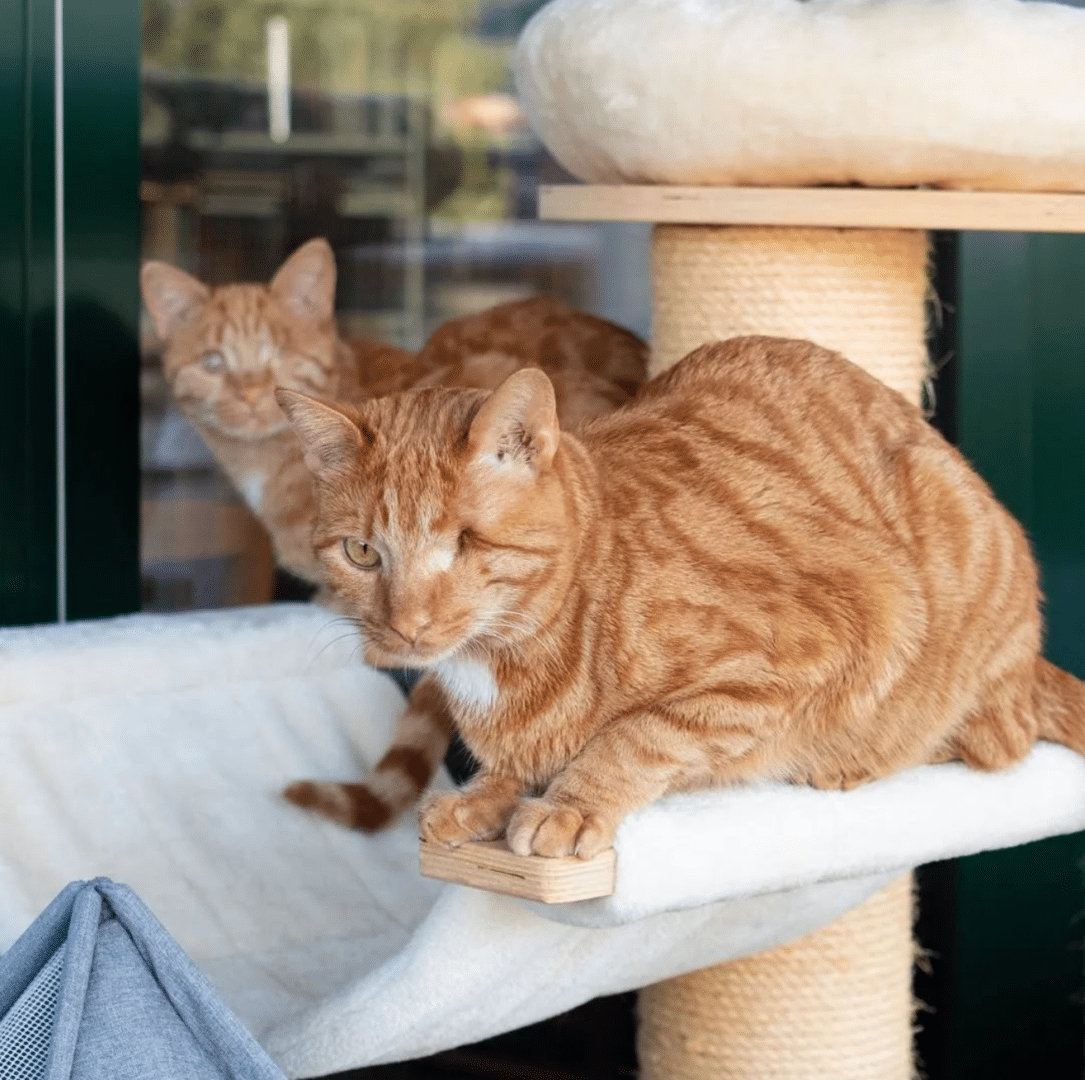 We named one-eyed Odin after the equally one-eyed Norse god. It is said that Odin exchanged his eye for wisdom, which definitely isn’t the case for kitty Odin!

For his blind siblings, we considered names that fit with the Norse theme. Loki, another Norse god, lent his name to the ginger girl. Loki often changes shape and gender in Norse mythology, so I don’t think he’d mind.

As for Shadow, he was named both for his all-black look and after the main character of Neil Gaiman’s novel “American Gods”. He, too, is related to Norse mythology – but no spoilers. 😉

When we brought Shadow and Loki home to their brother Odin, we were told they wouldn’t recognize each other after six months apart. Still, they got along extremely well from the very start. While they rarely cuddle, they all sleep on our bed together and they love to play and wrestle with each other. Little blind Loki often chases her big brothers around and bites their butts for fun! 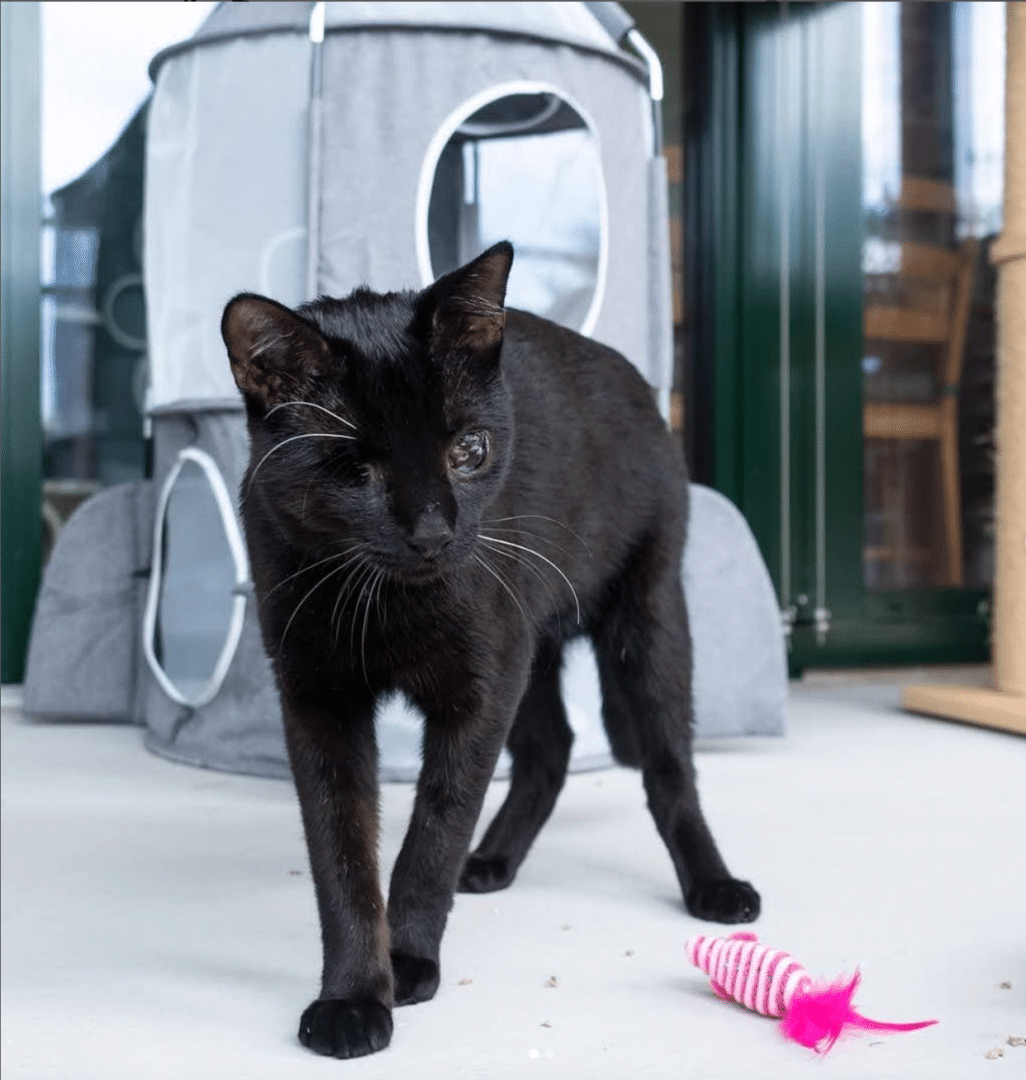 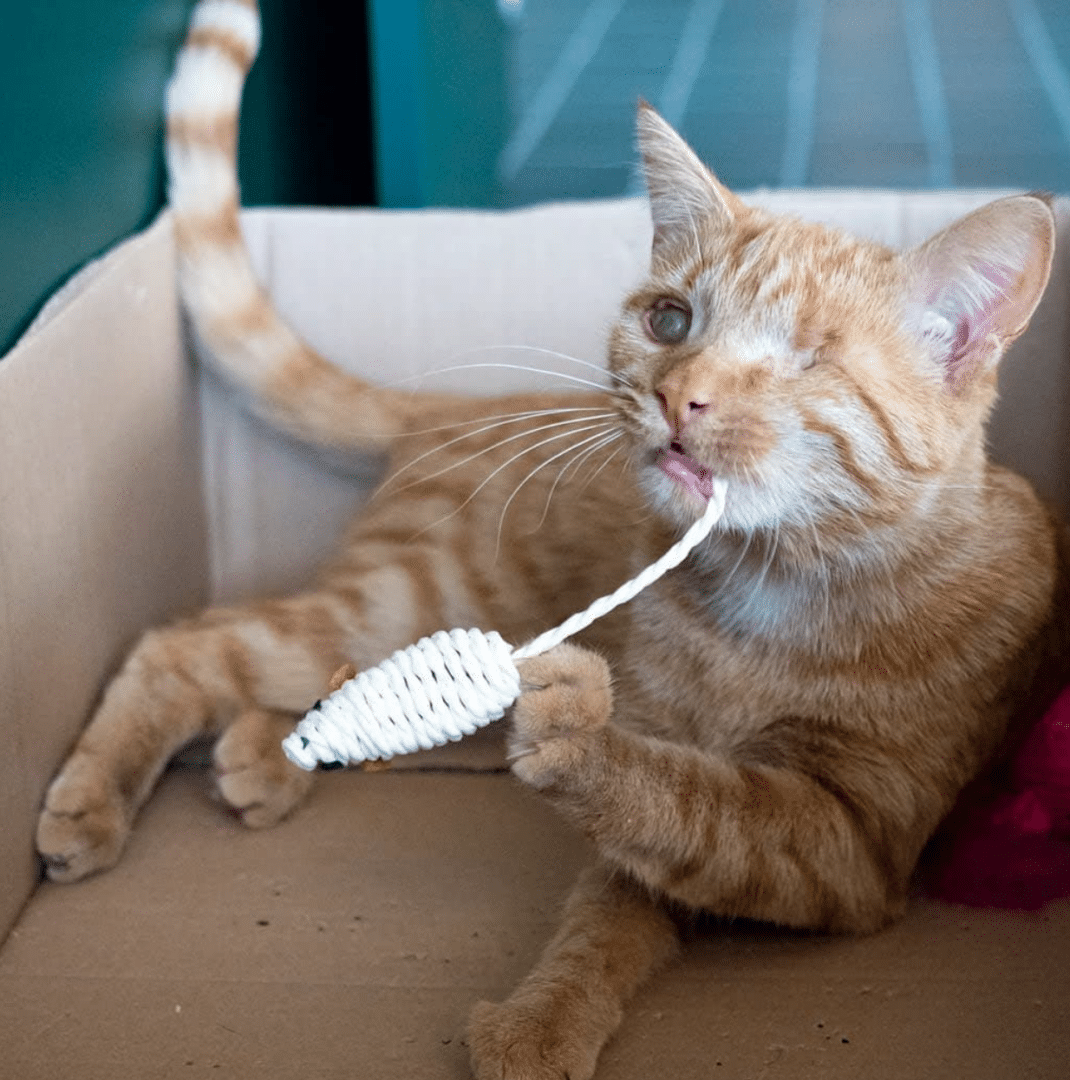 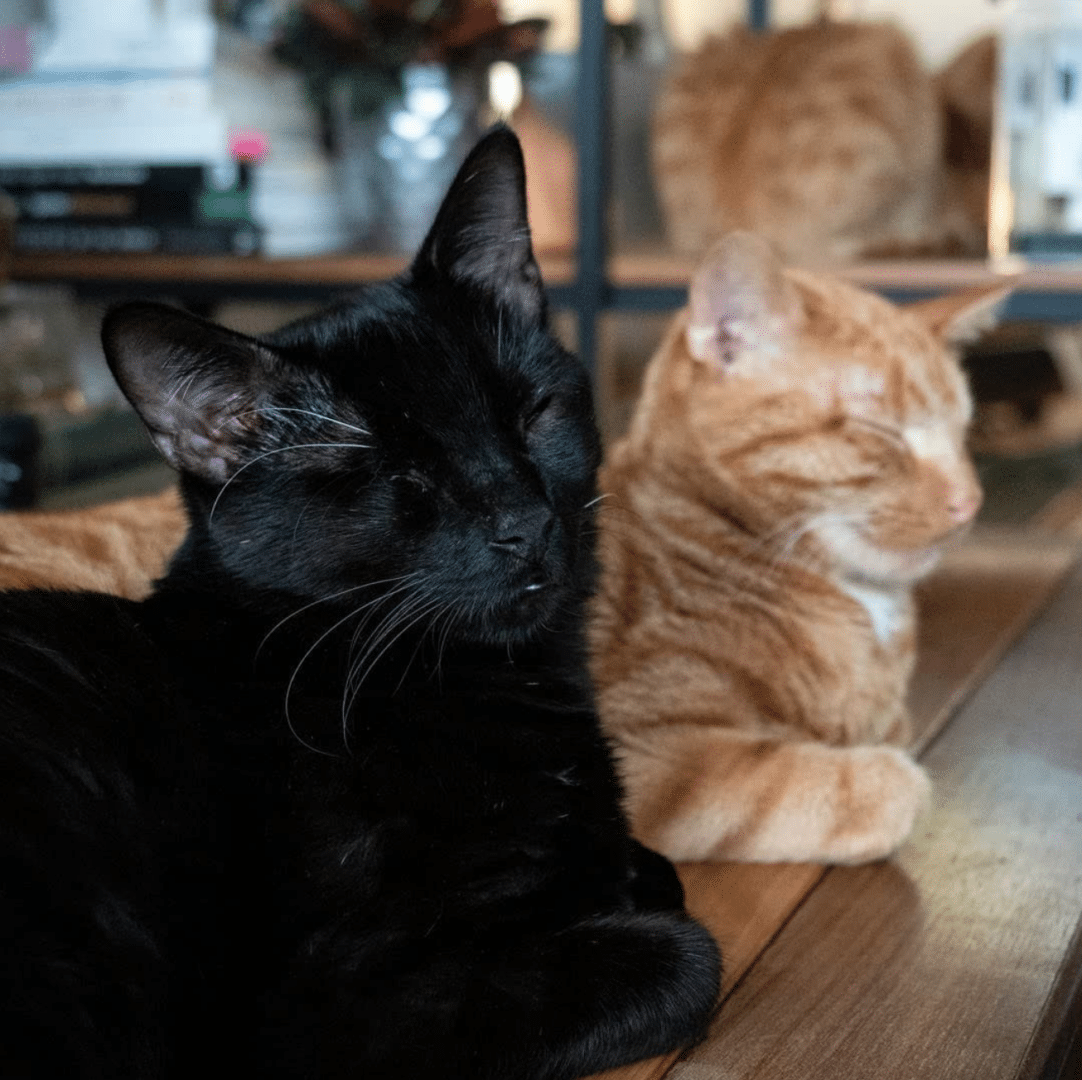 As befits a rare ginger girl, Loki is our sassy boss lady. She starts fights, chases her brothers, and loves shredding cardboard and paper. She is also a very forceful and active cuddler, knocking things over in her attempt to get every part of her body under your hand at once.

Shadow is a big sweet baby who climbs onto everyone’s shoulder and purrs, purrs, purrs. He is calm and assertive around his siblings – never pushy like Loki, but also willing to defend what is his.

Odin, our only seeing cat, is very silly. He makes the funniest faces and he loves wrestling with his blind siblings, even though they usually win. He is also cuddly and will often lie on top of us while breathing very loudly (this is how he purrs!).

All three love the clicker training we do every day – yes, even blind cats can be trained! They also adore toys of all kinds, paper bags, cardboard boxes, ping pong balls, and tunnels. On warmer days, they hang out on our big secured balcony and enjoy the smells and sounds of the neighborhood. And of course, they love to play, run and wrestle together. We often hear trampling and crashing noises in the night! 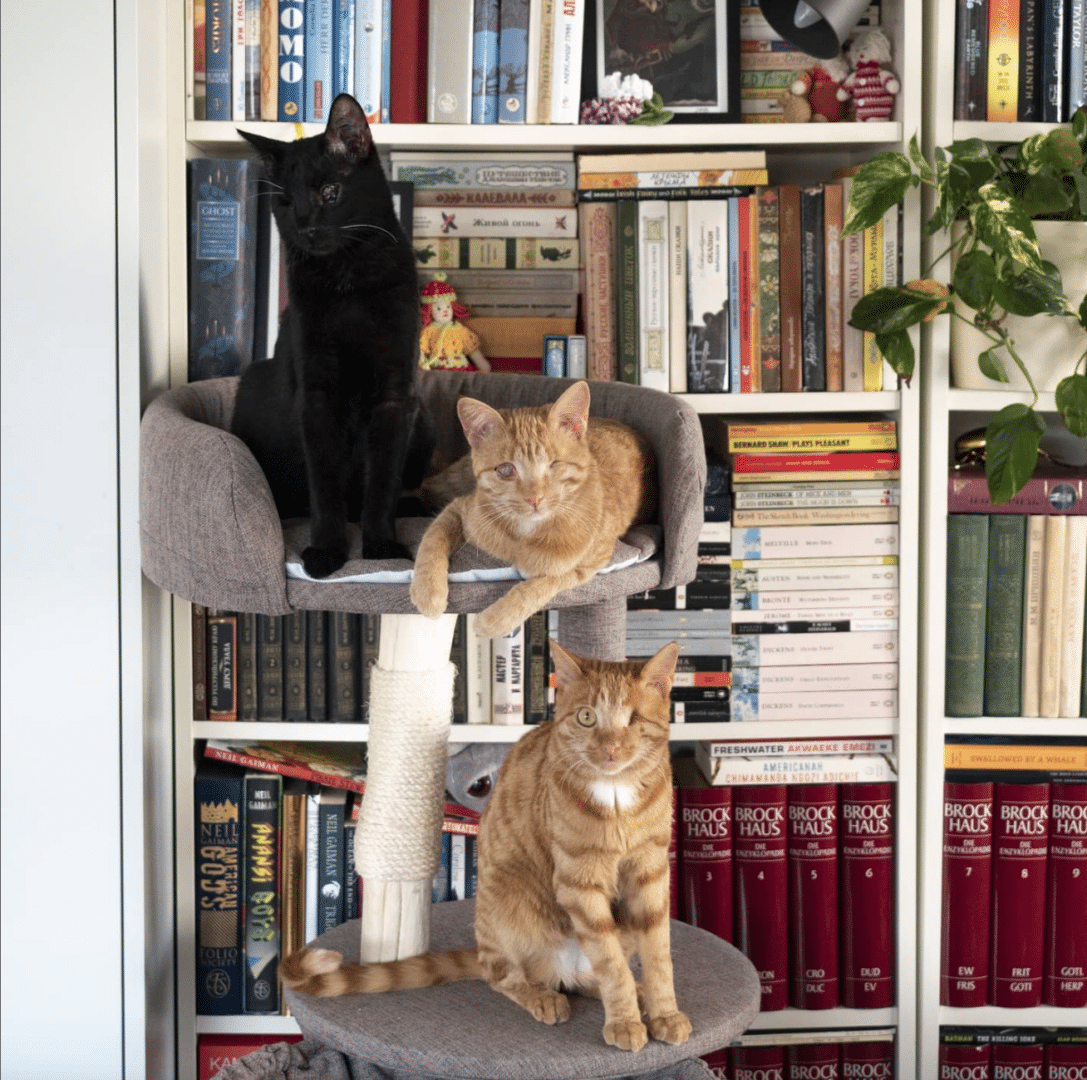 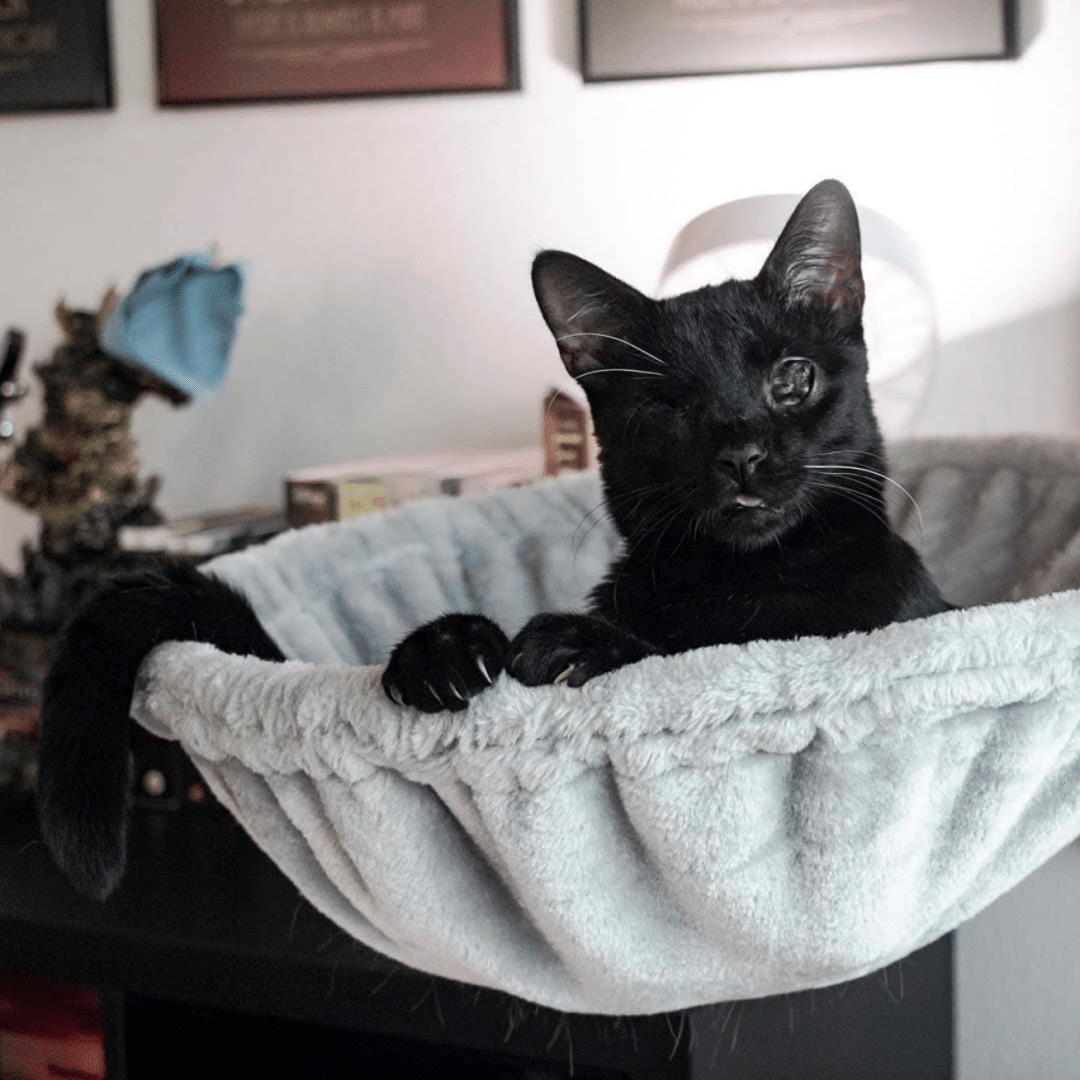 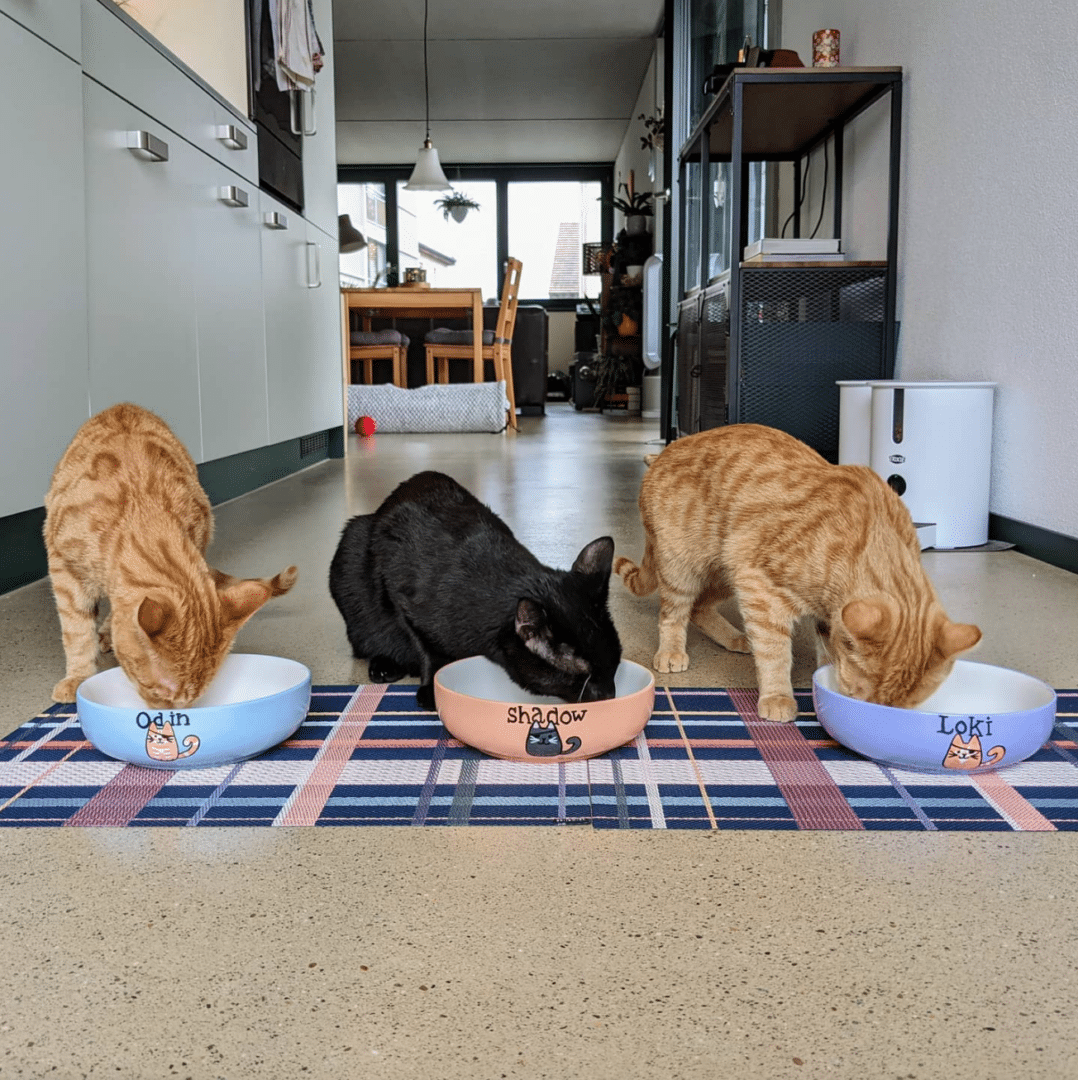 What’s something special you’d like for people to know about Odin, Loki and Shadow?

I started their Instagram account to show the world that blind cats are way less handicapped than you might think! They behave just like any cat, apart from walking into a wall once in a while, and they make absolutely wonderful pets and soulmates. I have been contacted by other blind kitty guardians who said they found my account informative or that it gave them comfort when their cat went blind. That’s why I decided to also start a website, ayeayekitty.com, where I write down my tips and experiences for living with blind cats. Please don’t be afraid to adopt a blind kitty!

I’d like to give a special “danke” to Odin, Loki, and Shadow’s human, Anna, for allowing me to share her cats’ stories and precious images with all of the Cattitude Daily readers. For more on this absolutely adorable trio of felines, be sure to check out ayeayekitty on Instagram, and don’t forget to check out their website, too. Hats off to her for making a difference in her cats’ lives, and for showing others the beauty that can come into your life from taking in blind cats.

Meet Teddy, Cedric, And Roo—AKA Secret Life Of The Burms