Signs A Cat Came From An Abusive Home

When we bring a new cat into our life, we do not always know their past. We know that cats are highly sensitive beings, and they can sometimes hold onto things from their past and allow it to leave them feeling worried about the future. I’ve always believed that a cat’s love is earned, not given. And this can especially be the case for a cat which came from an abusive home.

It’s important to note that abuse can take on many forms. From hoarding to neglect, and even physical punishment.

Whatever life your cat had before you had nothing to do with you, and knowing that they are now safe from harm may take time for them to understand. But, when it comes to our feline friends, patience and understanding can go a very long way. 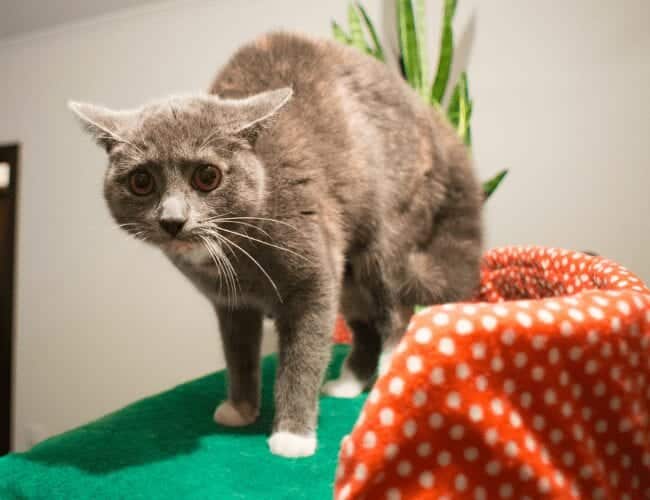 An all around scaredy cat

Cats are not fans of loud noises, and this is typically because of their fight or flight response in addition to the fact that their hearing is much more powerful in comparison to ours. There can certainly be breeds of cats which are more skittish than others, but for a rescue cat that seems scared almost 24/7, this can be a sign that they came from an abusive home. Although a cat is quick to react when something startles them, a cat which chooses to hide—especially from people—can indicate that their past life was a harsh one. You can build confidence in a scaredy cat, so here are some tips to help.

While each and every cat is an individual, a rescue cat which dislikes being handled might be associating touch to a painful memory which has left them scared for life. It’s important to allow your cat to be affectionate on their terms, regardless of how they came into your life. But this is especially important for the well-being of a cat which came from a life of abuse or neglect. They will learn over time that they have no reason to fear you, and once they do, you will start to see that wall that they’ve put up around their heart start to slowly come down.

Your cat’s memory is sharp, and they will often associate negative experiences with the action that occurred during the experience. For example, if a cat is avoiding the litter box, it’s a telltale sign that they could be experiencing pain while urinating. So, this could be why they choose not to be handled should they come from a life where touch equaled unkindness, or worse, pain.

Kitty will pull out the claws fast

Your cat’s claws and their teeth are their first weapon of defense and what they use to protective themselves from harm. And for a cat which was abused, this is no different. When a dog has an abusive past, they are often overly submissive. So much so, that when you approach them, they can even urinate themselves as they roll over. Cats are much different, and will react the complete opposite.

A cat which has only had negative experiences with humans might be quicker to react to one should a new human try to get near. Space and patience are key here. If day after day the cat observes that a new human in their life is treating them only with kindness, they can learn that not all humans are bad. But, again, this will not happen overnight. But it will certainly be worth the wait when the cat learns that life can be good, and so can people. And hearing a cat which was once terrified purr in your arms for the first time is enough to melt anyone’s heart. 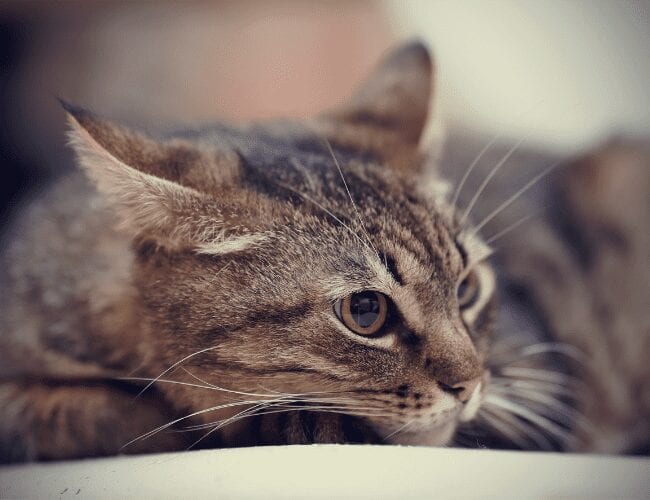 Thinking of a cat having scars from abuse is enough to break any cat lover’s heart, but there are other physical signs as well that a cat could have come from an abusive home. If a rescue cat’s general appearance is poor, this can be a sign their past life was not a good one. Cats from hoarding situations are often matted, malnourished, and suffer from a long list of health problems—from flea infestation to eye infections, etc. Getting kitty into better shape puts them on a path towards a better quality life and is the very best thing you can do for them—aside from giving them a loving forever home.

Extreme cases of animal abuse are now considered a felony in the United States, and it’s relieving to know that animals are getting the voice they need so that they don’t have to suffer at the hands of humans without repercussions. Knowing and understanding the signs of animal abuse is the first step towards giving a cat a better life. And thankfully a cat which has been abused will never have to suffer again for a single second once they’ve entered your life. Rescuing cats truly saves lives, and it also gives cats which had a horrible start at life a chance to live like a real cat. 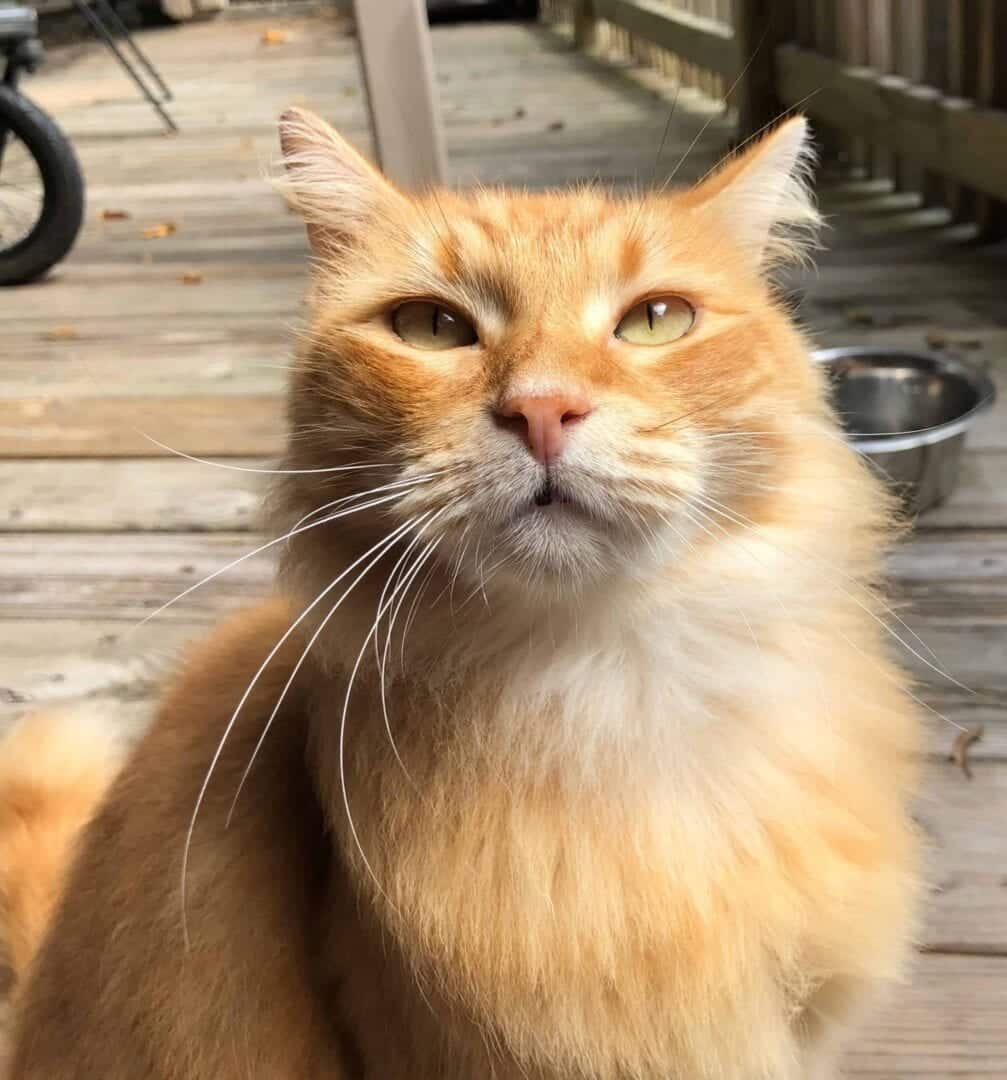 My oldest cat, Mr. Purple, was thrown from a moving vehicle as a kitten and it broke his leg. Once he was doctored up and rehabilitated, he was available for adoption. And all it took was one look to steal my heart when I saw him at an adoption event. And given his kind and gentle disposition, you’d never guess in a million years that he’d suffered at the hands of cruel humans.

When you are out and about and enjoying the fresh air, you really never know what could happen. You could just be going about your business when suddenly, out of nowhere, you stop dead in your tracks. For one woman in Claremont, New Hampshire, she knows this firsthand given her recent rescue mission for an abandoned cat and her kittens she helped to save. We will never know the real reasons why people choose to abandon animals, aside from pure heartlessness. For one pregnant cat, she was abandoned in a box on the side of the road this past Wednesday. The woman who discovered her was simply going for her daily walk when she happened to encounter the heartbreaking situation. Quickly, she sprung into action. She knew that this mama and her babies needed help if they had any chance of surviving. 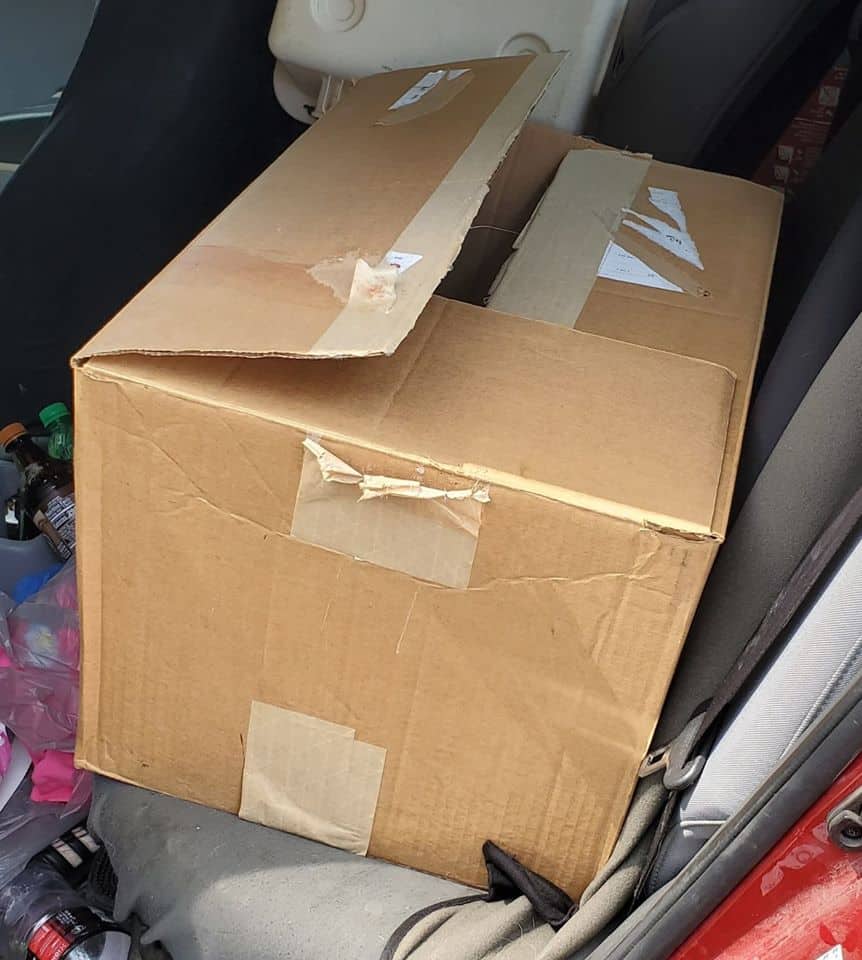 The Good Samaritan rushed them to her local animal shelter, the Sullivan County Humane Society. From there, the shelter immediately brought them to the Springfield Animal Hospital to get them the urgent care that they needed. The mama was found to be severely dehydrated, with a high fever and anemia, and an emergency cesarean section was performed to help her deliver the remainder of her babies. And worst of all, two of the newborn kittens lost their lives before they even had a chance to be rescued.

Sullivan County Humane Society of NH shared a Facebook post alerting their followers of this senseless act of animal abuse, and while they are deeply understanding of how hard life is for many right now, they want all to know that situations such as these should never occur for any reason for the sake of animal kind:

“We have named the cat Sugar. She was rushed to our vet, Springfield Animal Hospital. When she was found, she had had 5 kittens, 2 of which had passed away before she was found. At our vet, she was found to be severely dehydrated, had a very high body temperature and anemic, probably from all the fleas. Once stable enough, she had to have an emergency c-section during which 3 more babies were removed. Sadly, 2 of those did not survive. The vet estimates her to be 1-year-old. She was pregnant with 8 babies. 4 babies survived, 4 did not make it. 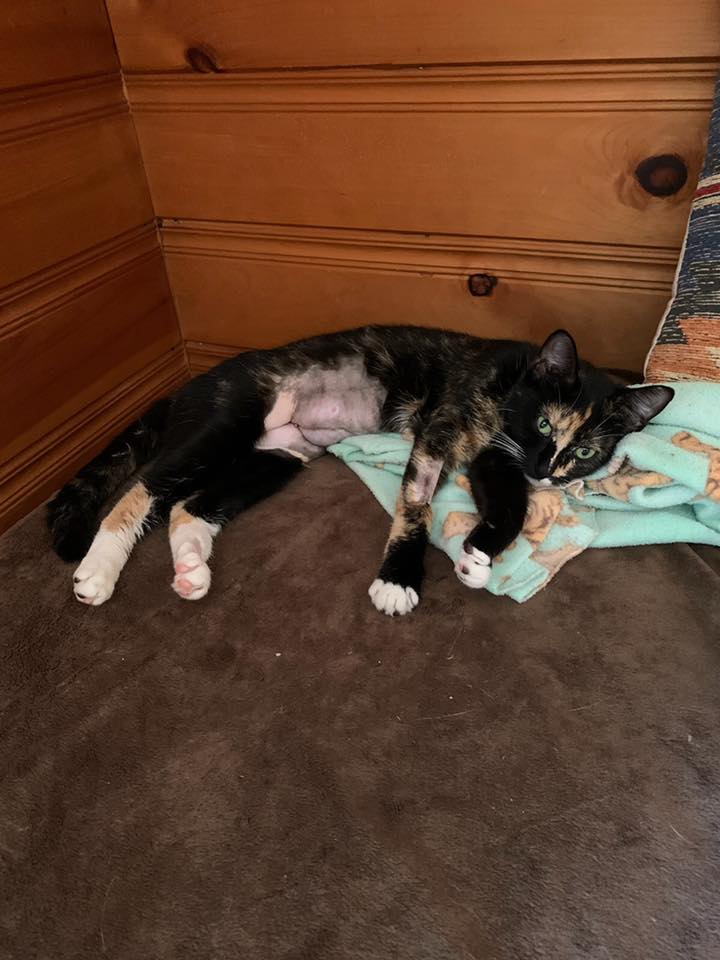 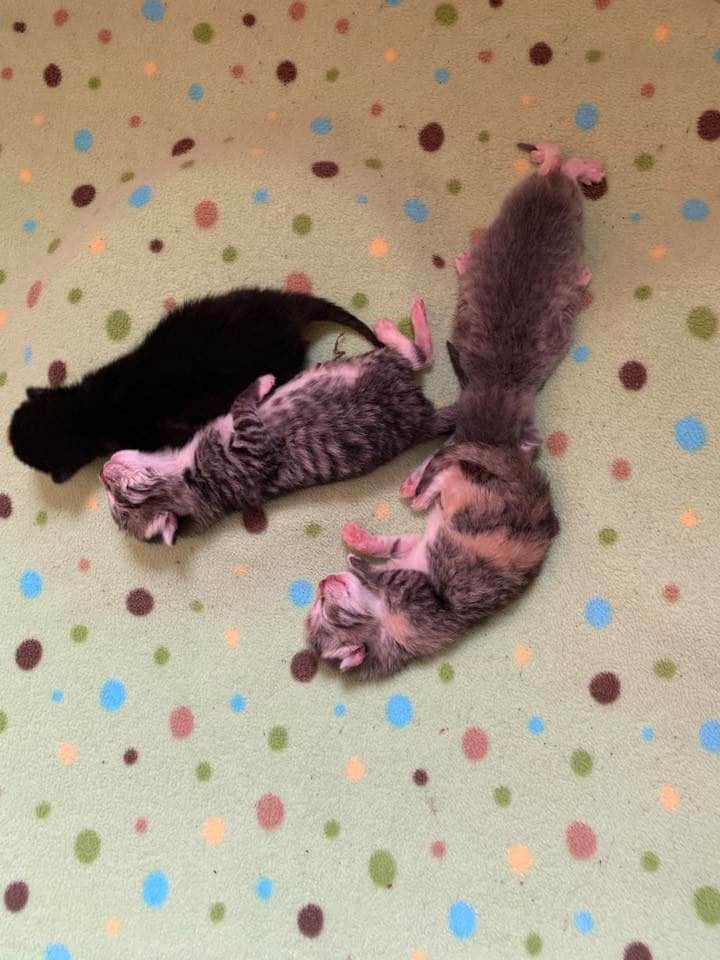 The remaining 4 kittens have now been moved to a foster home to be bottle fed. Sugar, sadly, is not doing well. She has been transferred to SAVES where she will need a very costly blood transfusion and need constant monitoring as her body temperature is still way too high. Please keep mom and her 4 remaining kittens in your thoughts. Although it is not all about the money, if anyone would like to help contribute to her care, we would greatly appreciate any donations as her vet bill is already in the thousands.” 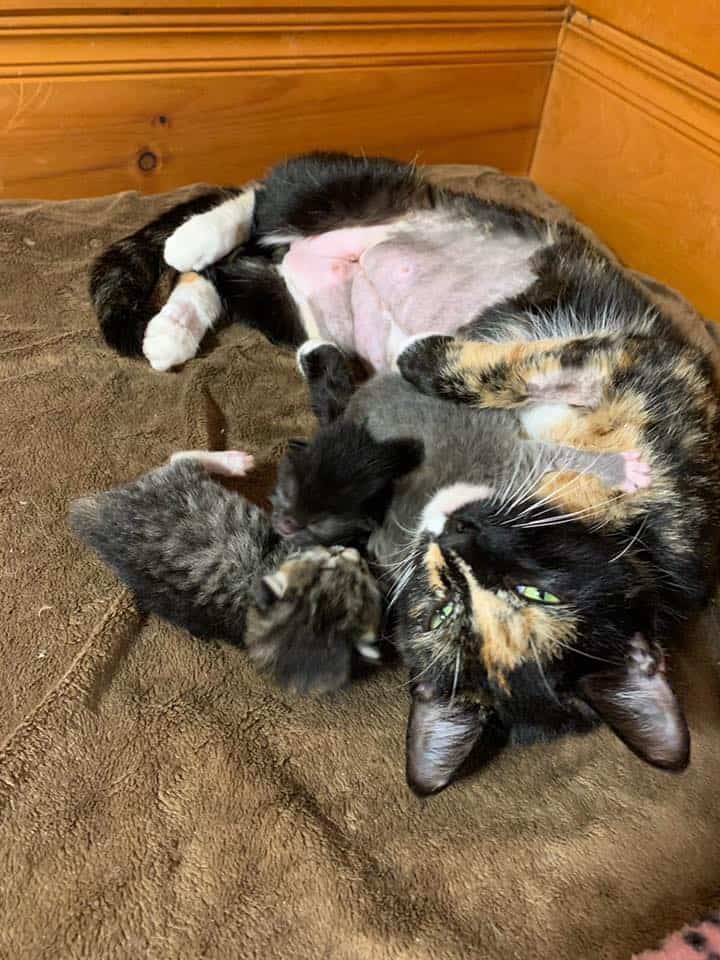 PREVIOUS UDPATE: “Today we received a call from a woman who was on her daily walk. She came upon this box on the side of the road. To her surprise she found a momma cat in active labor with 2 deceased kittens and 3 who are alive. However, mom is in critical condition and all have been rushed to the vet. Thank goodness for this kind woman. Please do not abandon animals. More so, please do not abandon a mom with her kittens who clearly are in need of emergency care. We know that that Covid has taken a toll on us all, but there are resources here in our hometown. If you need help please reach out. We are here to help in any way we can and if we cannot we will do our best to point you to the right resources. Please keep this mom and her babies in your thoughts. We will update as soon as we hear from our vet.” 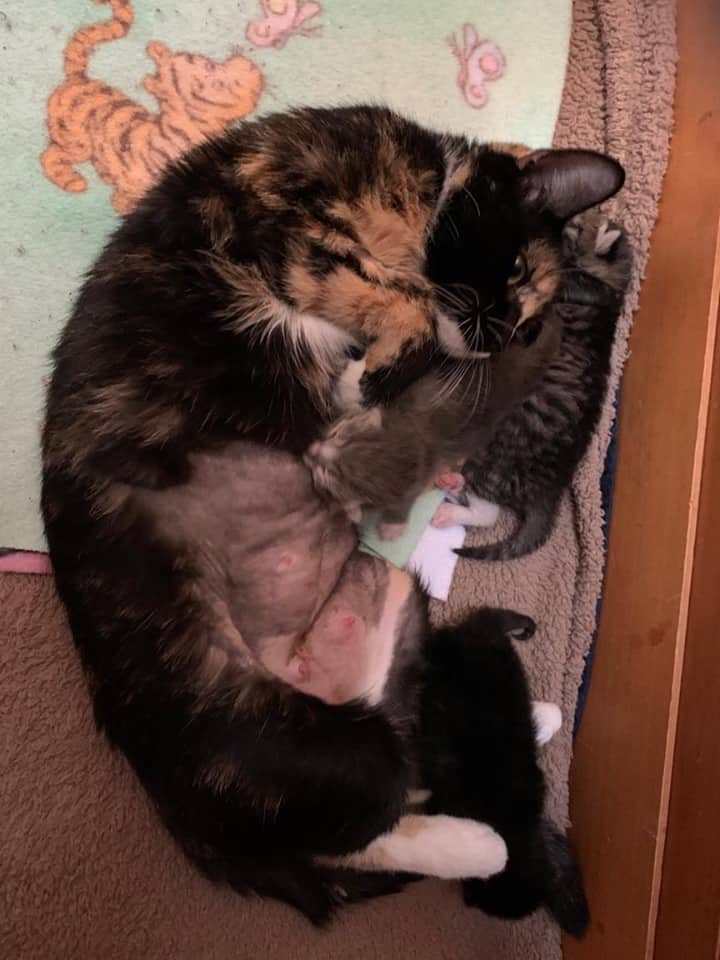 Thanks to lots of care, love, and generous donations towards Sugar and her babies’ care, the family is getting better day by day. At first motherhood was very difficult on poor Sugar which is understandable given the trauma that she endured, but she and three of her kittens are now doing much better. The three surviving kittens are being supplemented with fluids and kitten milk while Sugar’s milk continues to come in and she nurses her offspring. Out of the eight Sugar was expecting, only three little fighters have survived.

If you’d like to make a donation on Sugar and her babies behalf, you can do so here: PayPal to sullivanhumane@hotmail.com, or mailed to PO Box 111 in Claremont (03743), or you can even call in to Springfield Animal Hospital at 802-885-2505 to make a donation over the phone should you wish. 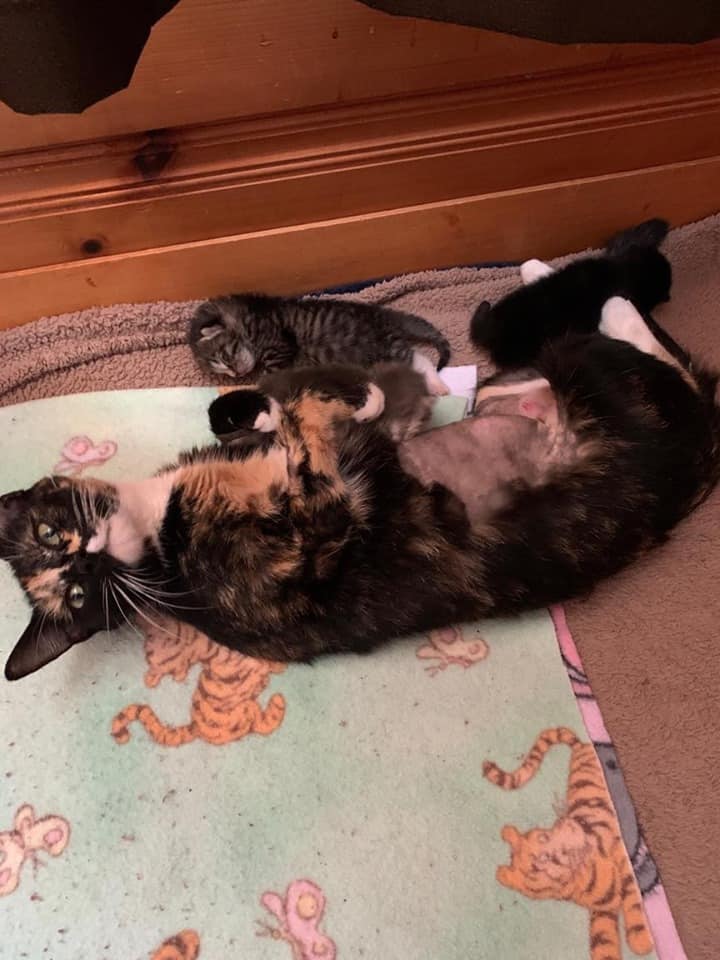 Want to learn more about the Sullivan County Humane Society of New Hampshire and all the hard work that they do for our animal friends in need? Please visit their website here.