In life, friends can come in all shapes and sizes. And for one rescued Cane Corso and an itty bitty tabby kitten, they’re living proof of it. Oftentimes, the biggest dogs have the biggest hearts, too. And for Norm, AKA Norm the House Hippo, he’s showing the world that tough-looking dogs like him don’t need to be feared, because the truth is, they have gentle souls and so much love to give.

I came across the story of this canine house hippo and his tiny feline companion and reached out to his owner hoping to feature this sweet tale of two adorable friends. Thankfully she agreed, and the photos are enough to warm even the coldest of hearts!

How did Norm come into your life?

Norm came into my life 2 years ago in January. My boyfriend works as a veterinary technician at a local humane society, and he sent me a video of this emaciated young dog. He was only 55 lbs and looked like a skeleton, but he was so happy to be getting pets from my boyfriend in the video. My boyfriend told me that due to the dog’s condition, he would have to sit at the shelter for a while before becoming healthy to go up for adoption, and he asked me if I wanted to foster him instead. We have a history of taking in “medical fosters,” aka animals who are surrendered and need homes, but are not healthy enough to be adopted yet. They sometimes need overnight medical care and are in critical condition.

I have fostered many animals, and Norm has been my first and only “foster fail.” We connected immediately, and we developed a strong bond while he was in my care. Normally, I’d expect a dog like him to be fearful, but Norm just had this love for life, and every other living creature he came across, despite his rough beginning. 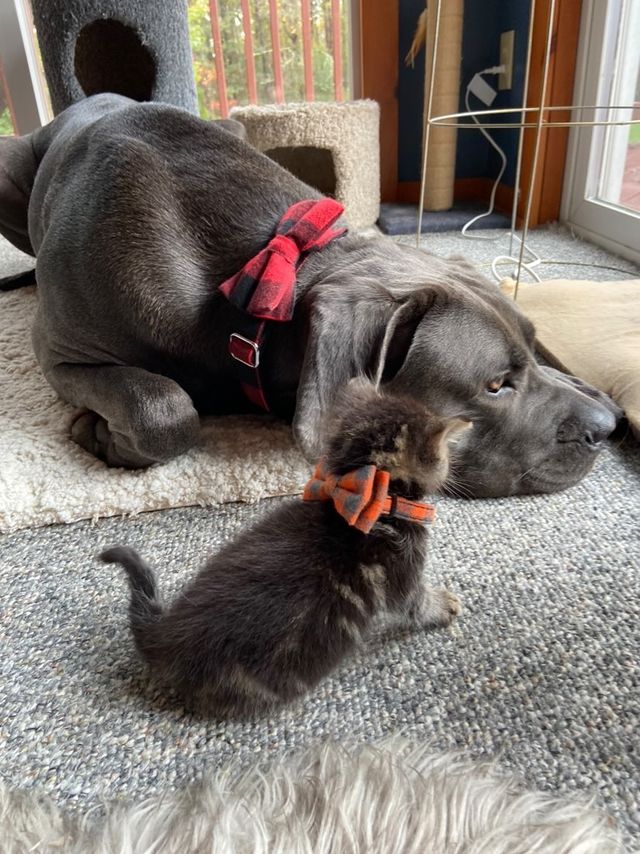 Can you tell me about the kitten?

The kitten came into our lives in a similar way…. My boyfriend sent me a photo of this emaciated, dehydrated kitten who got dropped off at the humane society without his mother or littermates and was in critical condition. He was very anemic from being covered in fleas, and my boyfriend told me the kitten might not survive the weekend, but he wanted to give him a chance.

We took him home as a medical foster, syringe fed him, gave him subcutaneous fluids daily to hydrate him, and weighed him every day to make sure he was gaining weight. He was originally very unstable on his feet and not strong enough to walk well. 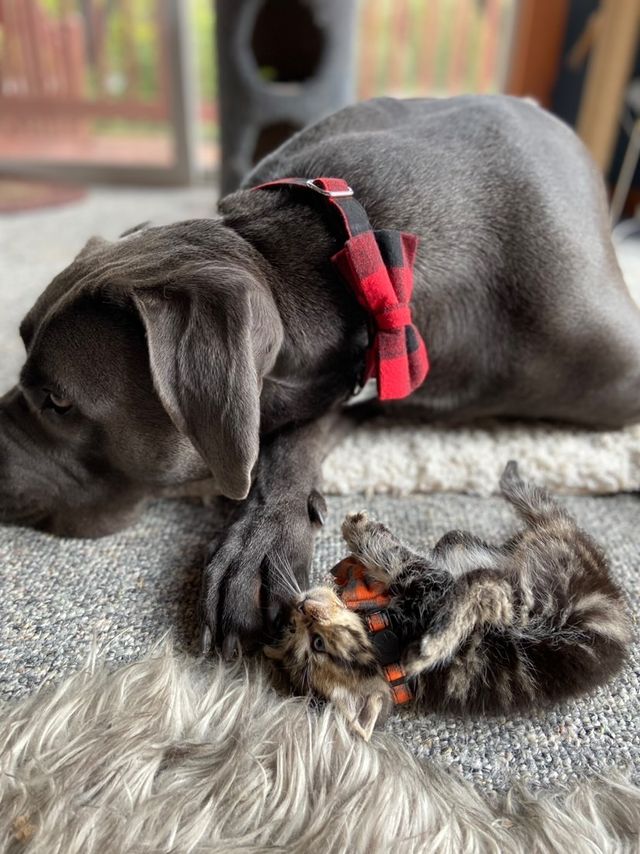 Has Norm ever encountered other cats before?

We introduced the kitten to Norm because at the time it was safer than introducing him to our cats (the kitten was not up to date on vaccines and could potentially spread diseases to other cats). We also knew that Norm is very gentle with children, puppies, and other small or young animals, despite him being 130 lbs.

We had Norm lay down and put the kitten down near him. The kitten immediately walked over to Norm, and let out this tiny meow. Norm sniffed his head, then began gently nudging and grooming the kitten, similar to how a mother cat would act. The kitten then curled up next to Norm, and we knew the two of them would develop a special bond after that.

Norm has never met a kitten before this. He lives with our two adult cats, but has always been wary of cats, and has a healthy respect for them.

Through my TikTok and Instagram accounts, thousands of people have watched Norm and the kitten grow to love each other, and they have become very invested in their lives. 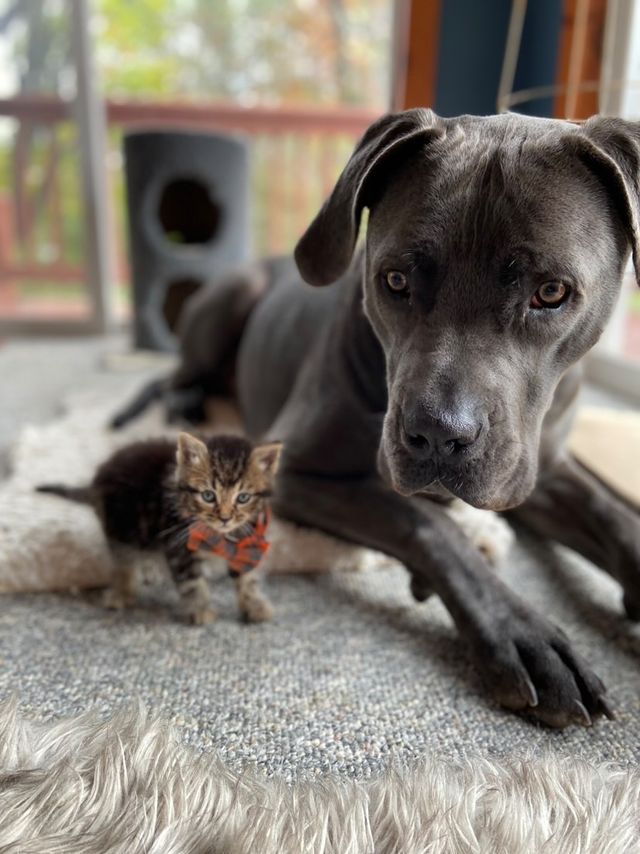 Are you thinking that the kitten will become a “foster fail” too?

Most people want me to keep the kitten and “foster fail” him like I did with Norm, but I’m trying to help everyone understand that you can’t keep every foster and continue to foster. I really like The Kitten Lady Hannah Shaw’s quote: “Goodbye is the goal of fostering.”

My good friend who is also a veterinary technician is going to adopt the kitten, and her son Named him “Super Sonic Bumblebee” (Sonic for short) because he’s so fast! My friend did a meet and greet last weekend, and the kitten loved meeting her family. The really special thing is, my friend has a senior Boxer who resembles Norm, and has lived with cats his entire life. Sonic met this dog (named Reggie) last weekend. The two of them got along very well, and I believe they will develop a special friendship very quickly. Norm will get to see Sonic for playdates, which makes me happy. 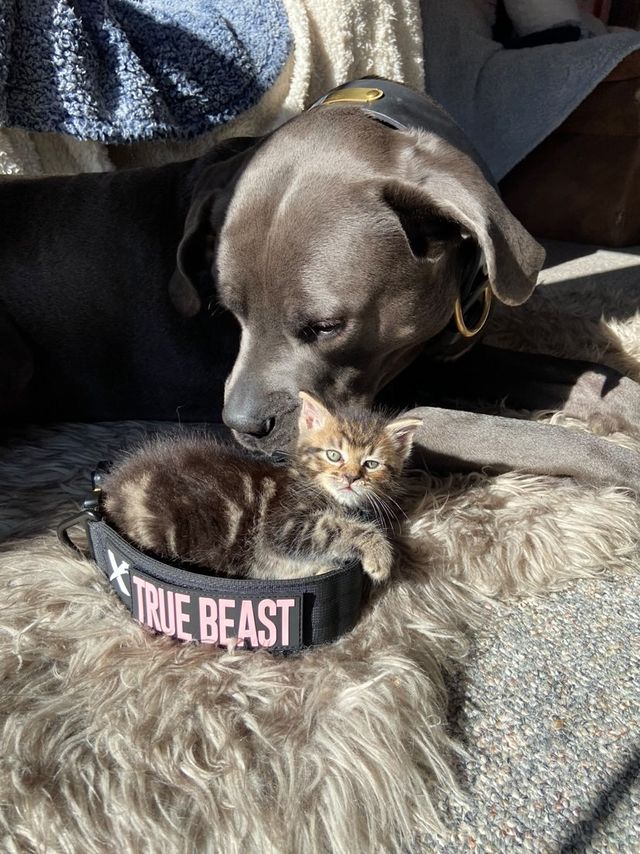 What’s something special you’d like people to know about Norm?

We rescued him thinking he was some sort of pit Bull/giant breed mix, but after DNA testing him through Embark Vet, we discovered he is 100% Cane Corso, also known as an Italian Mastiff. We are still curious about his history before he came into our lives because it’s not often that you adopt a purebred giant breed dog “by accident.”

I’d like to give a special “thank you” to Norm’s owner for allowing me to share this heartwarming tale of friendship with all of the Cattitude Daily readers. For more of Norm and his kitten friend, check out this cute pair on Instagram and TikTok. 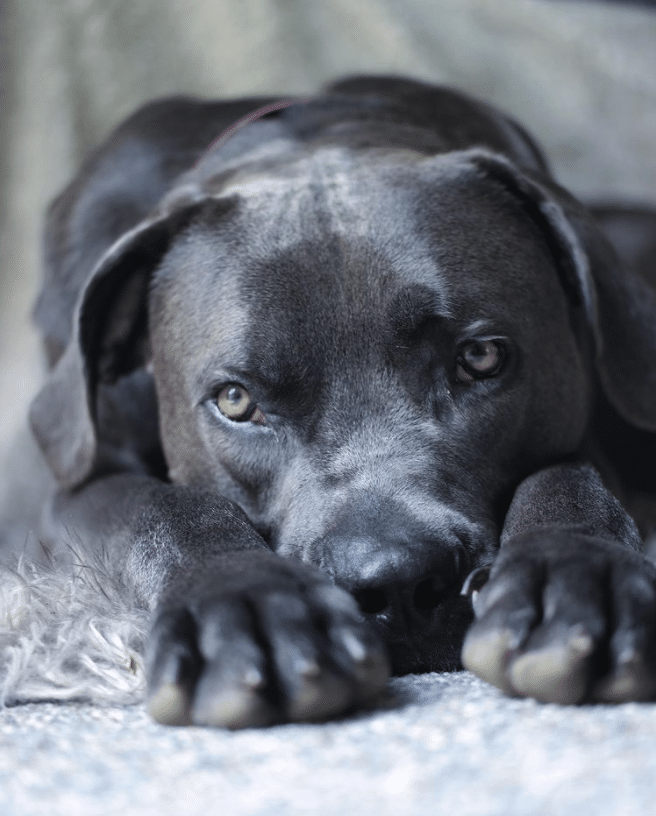