One Brave Cat Faces Off Three Coyotes Like A Total Badass

I’ve always said that cats are like tiny assassins. Although the average house cat weighs in near 8 lbs, that doesn’t mean that they can’t defend themselves against much larger animals. We know that cats will arch their backs and puff up their tails when faced with danger. And I’m sure that Max, an eight-year-old tuxedo cat living in Highland Park, CA, did just that when he was faced with not one—but three—coyotes!

The coyote encounter was caught on tape, and it’s something to see. And the best part? Max is here to tell the tale without a single scratch! The event took place last week, when the cat’s owners were at home watching a movie in their living room. Max’s owner reports that this is the first time she’s ever seen a single coyote around her home.

Watch Max in action against the coyotes in this video from CBS Los Angeles:

Thankfully, Max’s owners have plans to keep him strictly indoors moving forward. While Max’s act of bravery was nothing shy of incredible, luck was certainly on his side that evening. I’m glad to see that he made it out in one piece and alive with no injuries to speak of.

Coyotes are fierce predators and there are many roaming freely across many areas of California. Next time Max sees a coyote, we hope it’s from the safety of his home window.

Or, perhaps, Max will get that catio that his owner, Maya Gurrin, promised! 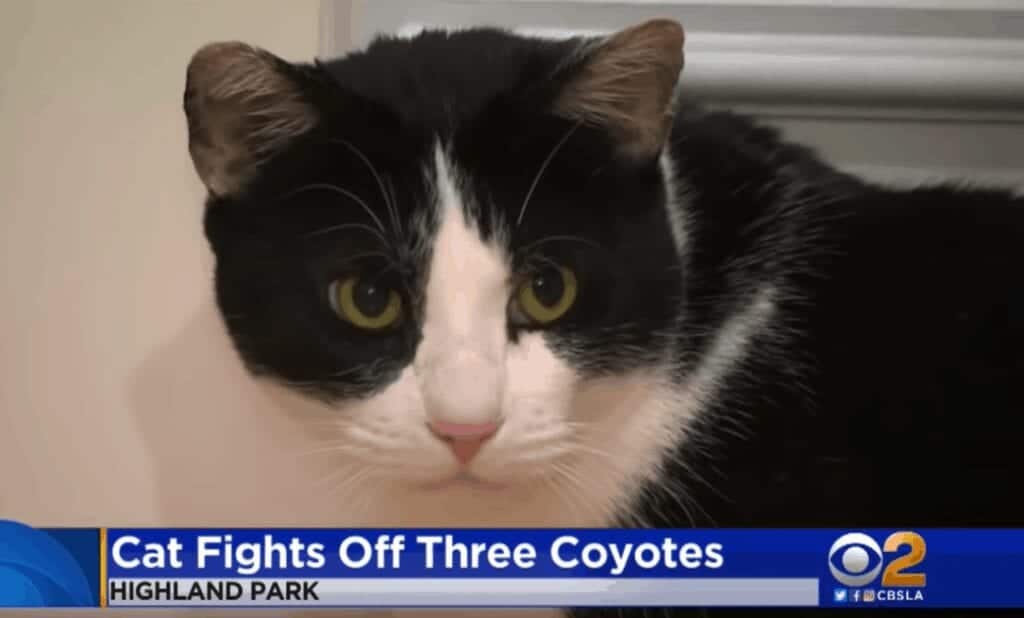 Do you have a story to tell about your cat’s heroic act of bravery? We’d love to hear it. Check out this other amazing story of Shelly, a rescue kitty who saved her elderly cat dad from a giant copperhead snake!

Want to learn more about tuxedo cats? Check out my article on these awesome black-and-white kitties that are full of cattitude.

Meet Coby The Cat: A Gorgeous Kitty With Eyes That Sparkle