Okay, so you know how there’s Shark Week every year on the Discovery Channel? I enjoy watching it, but I sit and wait in anxious anticipation of Big Cat Week on Nat Geo because I can’t get enough of big cats! Many of us crazy cat people love our house cats, but if you’re anything like me, you have a huge soft spot in your heart for the big cats of the animal kingdom. And if you know a lot about big cats, then you know that some of these big cats aren’t really that big at all! As a matter of fact, some big cats weigh the same or even considerably less than those tiny house tigers sitting comfy and cozy in our living rooms.

And when I hear about the birth of endangered species of big cats, it always puts a smile on my face.

Although numbers are dwindling worldwide, there are many dedicated individuals affiliated with preservation groups who work to protect these big cat species can walk the earth for years to come. Their work is not in vain, and every little miracle brings hope for the many gorgeous big cat species of the earth.

For San Diego Zoo Safari Park in California, they recently revealed to the world two tiny big cat kittens that are rare and oh-so-adorable. The kittens, named Ryder and Skyler, are black-footed cats, which is the smallest big cat still roaming in Africa today. And these cats might be pint-sized for big cats, but I assure you, they’re deadly cat assassins with a kill rate of 60%! So, these might be the deadliest little kittens you’ve ever seen—so don’t let that adorableness fool you one bit. The male and female kittens were born to mother, Arwen and father, Sawyer, on April 28, 2020.

In this cute video, you can see the pair start to explore the big wide world outside of their den. And, they’re quick to enjoy some tasty meat treats from the staff dedicated to taking great care of them and helping them to thrive.

Once they reach maturity, these kittens will tip the scales around a whopping 4 lbs.

So, like I said, these are the tiniest cat assassins ever! Smithsonian Magazine tells us that these black-footed cats are such swift and fierce hunters, they catch more prey in one night than a leopard does in sixth months. Which is anywhere from 10-14 birds or rodents per nightly hunt! Most impressive you are, black-footed kitties!

In the wild, the only place you can find these cats is in South Africa, Botswana, and Namibia. The IUCN Red List last globally assessed these ferocious predators as “vulnerable” in 2016. So, hopefully the birth of these kitties can bring hope to the species.

“We are honored to care for these kittens, and the adult black-footed cats at the Safari Park. San Diego Zoo Global is one of 17 organizations in the U.S. participating in the Association of Zoos and Aquariums (AZA) Species Survival Plan (SSP) for this species. The birth of these two kittens, and all births, help further our knowledge and conservation of this species.”

If you thought these feline youngsters were cute, check out what is known as the “world’s smallest cat”—the rusty-spotted cat here on cattitudedaily.com. I promise, they are some of the cutest big cat kittens you ever did see! 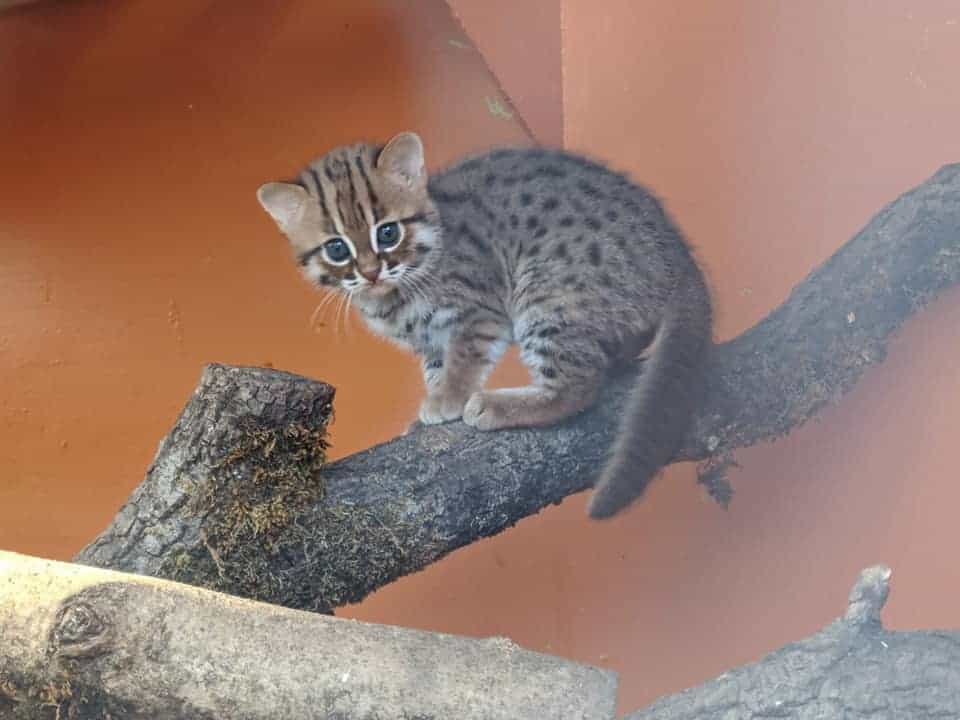