Brokenhearted Man Goes To Shelter To Heal His Heart—Gets Best Surprise Ever!

When you lose a cat, a piece of your heart goes with them. Cats are family for many reasons, and when one goes missing it’s utterly devastating. For Theron, his cat Cutie Pie went missing and he searched for him only to find nothing. Cutie Pie was very loved and cared for by his cat dad, and Theron felt the only way to try and mend his broken heart would to be to adopt another kitty who needed a forever home. And for his good deed of helping another cat in need of a home, he was pleasantly surprised at what he found when he walked into that shelter. It seems a very familiar face was right there waiting for him!

Bangor Humane Society shared the update just this past Friday,

“Theron came into our shelter today looking for a cat to heal his heart after his kitty, Cutie Pie, disappeared about a week ago. As he perused the kennels, he stopped to examine one of our friends a little more closely and when the cat turned to face him, Theron erupted with joy. THIS WAS HIS CUTIE PIE!! Theron’s camera roll was full of pictures of Cutie Pie, leaving no question that this reunion was the real deal! Cutie Pie found his way *back* to his forever home tonight. (Let me just say I’ve honestly never seen a cat so eager to be in a cat carrier! He was SO ready to go home!) This is the good stuff. We want to reunite as many animals as possible with their owners, and it’s an honor to keep them safe until that can happen.” 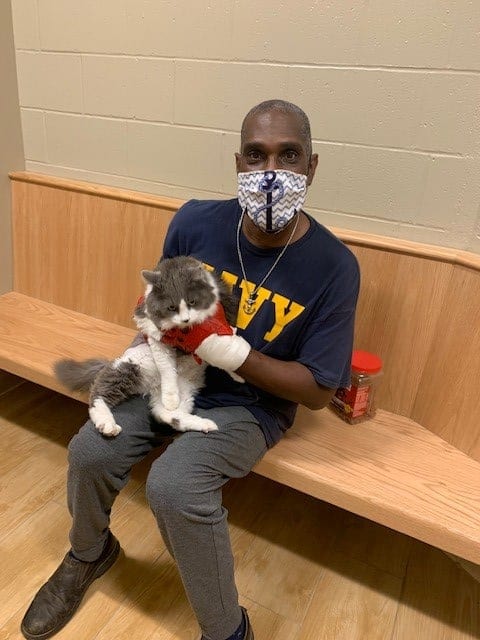 If you’d like to learn more about the Bangor Humane Society and all the hard work that they do for our animal friends in need, you can visit their website here. Are you a sucker for happy reunion stories involving our feline friends? Then this one about a trucker that stopped at nothing to be reunited with his missing cat will really warm your heart. Read about it here on cattitudedaily.com.

In a true case of wanderlust, a cat appropriately named Cargo is starting a new life after an epic adventure. The intrepid tabby landed in Bangor, Maine last month after hitching a ride with some Air Force personnel. His journey started in California, but thanks to a few helping hands and a pair of cat-loving airport workers, he’s now safely at home. His days of spontaneous travel are (hopefully) behind him, but his new family says his adventurous spirit is far from staunched.

In July, Air Force Captain Daniel Cotton piloted a Boeing C-17 Globemaster III cargo plane across the country. With one stop in Colorado, the trip was slow, and it would have been uneventful—if it wasn’t for their surprise stowaway.

Capt. Cotton first realized something strange was going on when he and his crew found cat poop on board the plane. They also discovered a half-eaten muffin on the flight deck. When no crew member fessed up to the muffin munching, they knew they weren’t alone. They found the stowaway cat hiding under a cargo pallet in the belly of the big plane.

The theory is that the cat was hiding in the pallet long before the plane was loaded. He was likely carried into the cargo area when the pallet was lifted and strapped into place. The crew that found him, however, said he had to be both brave and nimble to make his way from the cargo area to the flight deck.

The crew’s discovery happened shortly before they left on a longer flight to Europe, and Capt. Cotton says he’s thankful they found the cat when they did. The stowaway’s cross-country trip almost turned into an around-the-world adventure, but he’s now back to keeping four paws safely on the ground.

Out of all the flights Captain Cotton has piloted, he says discovering a stowaway cat is a definite first. After finding their stowaway, the Air Force crew and staff at Bangor International Airport turned to Bangor Humane Society for help. They contacted shelters and military bases in California and Colorado hoping someone out there was looking for their surprise stowaway. After three weeks with no leads, they decided to make the cat available for adoption.

Nancy Hamlin and her fiancé Justin Proulx both work at Bangor International Airport, and they’d been following the story of the stowaway cat since the beginning. The couple offered to foster the adventurous cat named Cargo, and now it seems like he might have found his forever home. They’re still offering Captain Cotton the opportunity to be Cargo’s permanent family, but being currently deployed, the Air Force officer isn’t sure if it will work out.

But that’s okay, because Hamlin and Proulx have vowed that no matter what, Cargo will always have a safe place to call home. They’ve carefully introduced him to their current cats and dog, and they’re making strides in becoming one big, furry family.

Since they’ve been fostering Cargo for a few weeks, they’re not at all surprised that the curious feline ended up as a stowaway. Hamlin told Bangor Daily News,

“Knowing Cargo the way we do now, we can see why he was on that plane. He has no fear and loves to get on top of or inside everything.”

Cargo hasn’t lost his adventurous spirit, although his recent explorations are limited to his new house. He’ll be an inside cat from now on, but he’s enjoying life with his two new humans, four cat siblings, and one beloved dog sister.