Cat Fights: What Every Cat Owner Needs To Know

While your friendly feline might be all purrs and head bumps when you’re around, kitty still has claws…and teeth. Cat fights are a natural behavior, and they often result in serious injuries. Outside cats get into fights, indoor-only cats fight with each other, it can be between two males, two females, or one of each gender. It doesn’t matter if the cat is neutered or hungry or sleepy, cat fights can happen at any time. We all wish our cats would just get along, but it’s important to educate ourselves about cat fights. It’s the only way to protect our pets and keep them safe.

Here’s what every cat owner needs to know about cat fights. 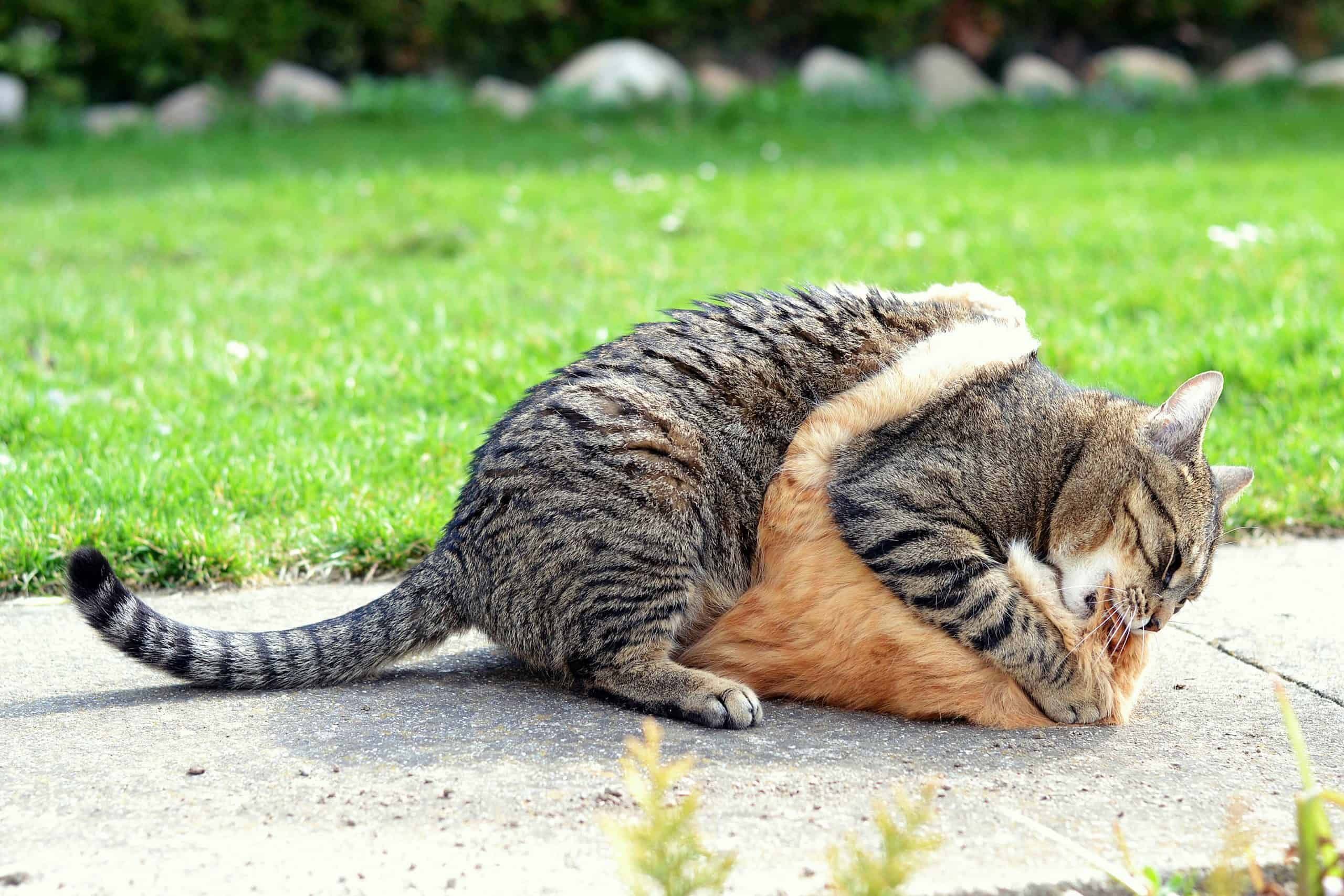 Is It Playing Rough or Aggression?

There are times when your cat’s playtime can look a lot like aggression. Some cats simply play rough with other cats. They roll around on the floor bunny kicking their opponent and biting the thick skin around their neck. Sometimes they play so rough that they leave behind noticeable scrapes and scratches.

Rough play, however, is not the same as a true cat fight. Cats from the same household can partake in the occasional wrestling match without getting into an actual fight. If you’re having trouble telling the difference, look and listen closely. A real fight will be accented by intense hissing, yowls, and screams. The combatants will have raised hackles, puffed-up tails, and flattened ears. 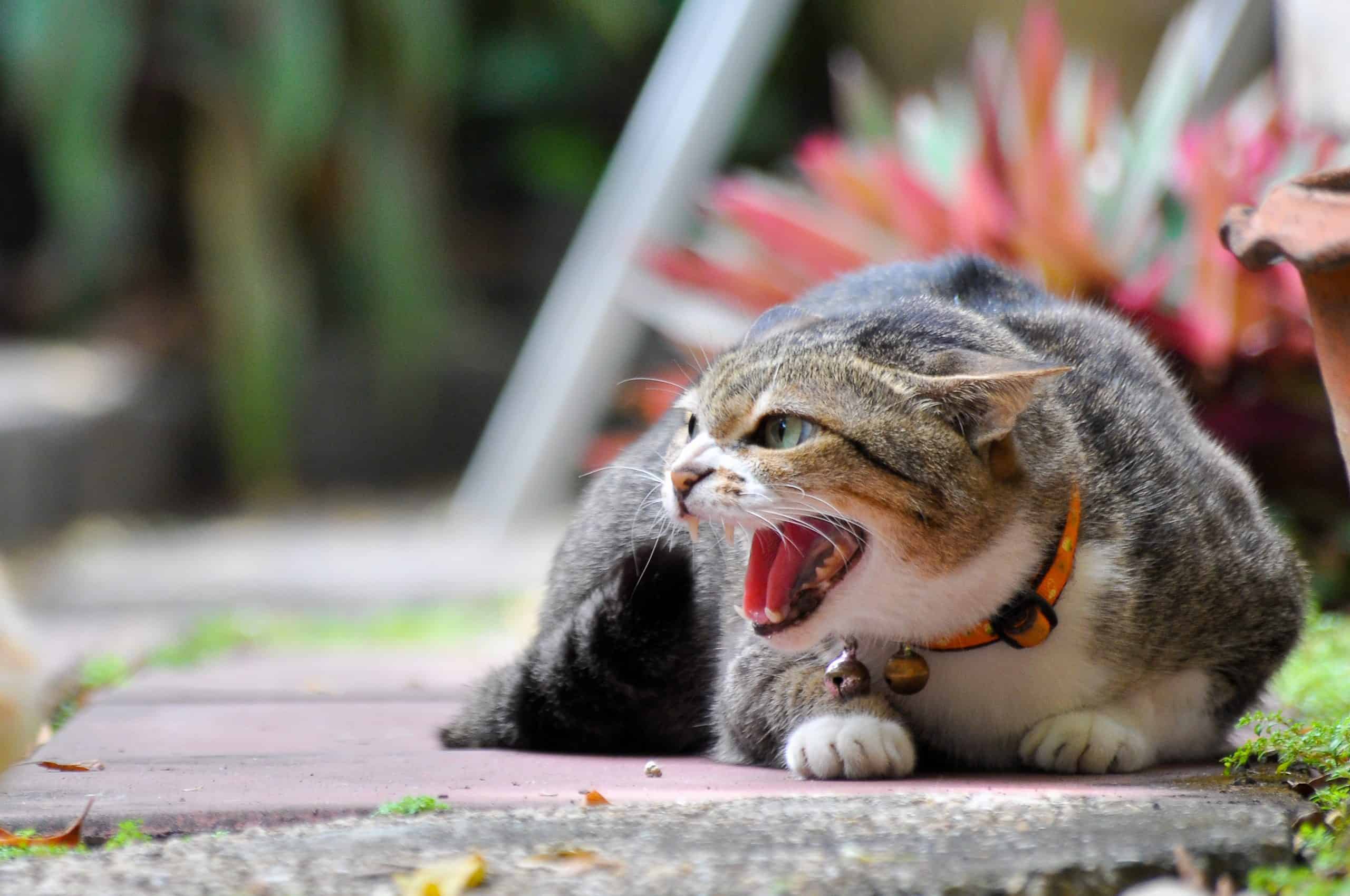 As random as they sometimes seem, cat fights don’t start spontaneously. There’s always a reason, and how you handle the situation will depend on what that reason really is. You need to understand the feline thought process and piece together what caused the problem. Conflicts can stem from a number of different reasons.

It doesn’t matter whether your cat lives inside, outside, or has access to both⁠—all cats can be territorial. The territorial instinct stems from a need to secure their own hunting ground and home base. Even if your cat doesn’t do much hunting outside the realm of catnip mice, the instinct to patrol and protect their property is still there.

When an unfamiliar or unwelcome cat invades your cat’s established territory, there could be a fight. Your cat feels a natural instinct to defend what they see as their property. They’ll likely give the intruder a warning at first. But if that doesn’t work, they’ll bring out the claws.

While both male and female cats can get into fights, it’s true that males (especially intact males) are especially combative. Once they reach the age of social maturity, somewhere between two and four years old, their hormones tend to take over. As with most male-on-male fights, there’s usually a female involved. Male cats compete for mates, and those conflicts can get seriously heated.

Intact males are most often involved, but hormone-related fights can also happen between neutered males and even females. 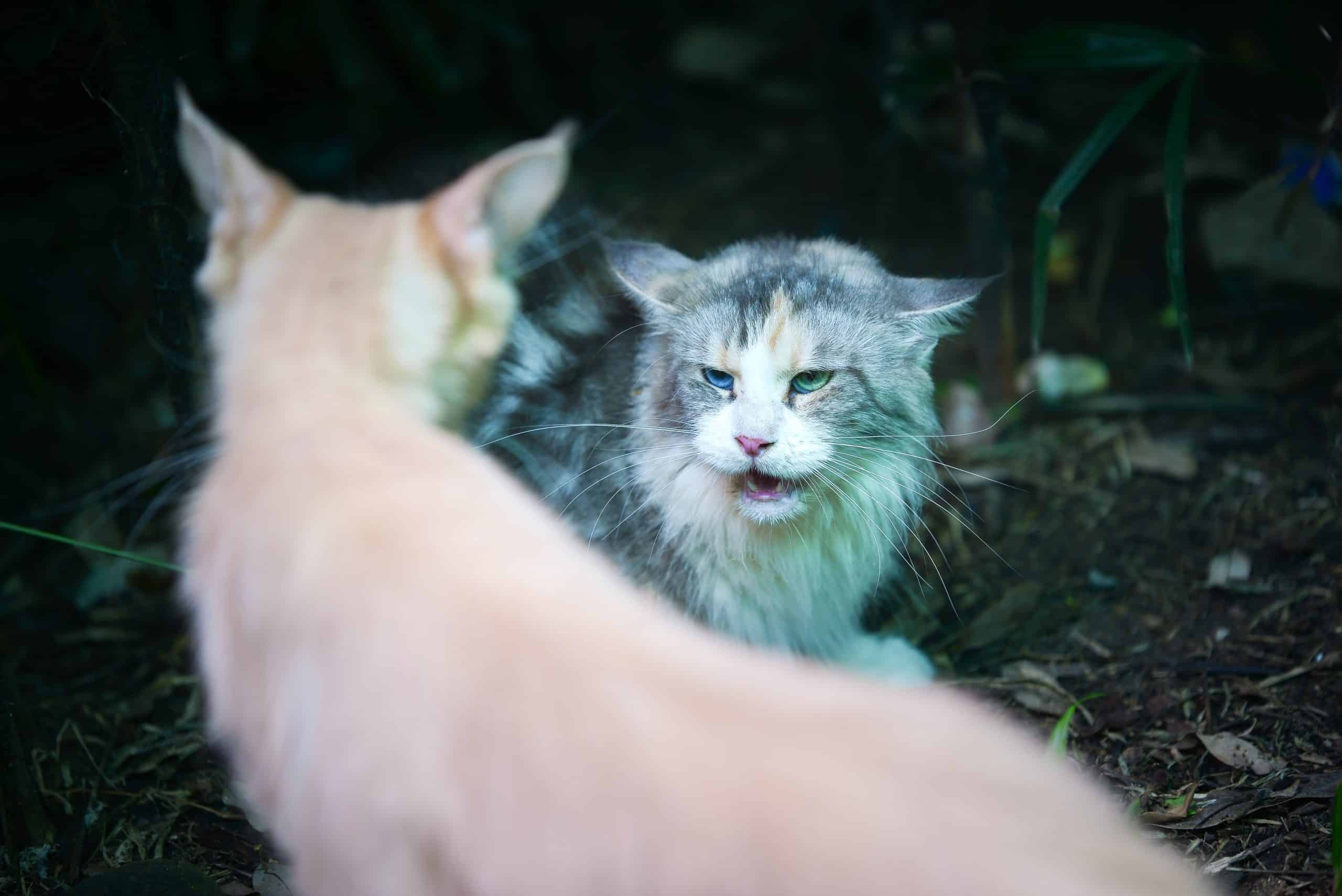 In some situations, cats lash out as a way to protect themselves. For whatever reason, they feel vulnerable or afraid. Their first choice of action is usually to run away, but that isn’t always possible. If your cat feels threatened and trapped, they might feel like fighting is their only way out.

This kind of aggression happens often when a new cat is introduced to the house. If the introduction doesn’t go well, one, or both, of the cats could feel threatened by the unfamiliar feline. Their nerves get the better of them, and they defend themselves by hissing and swatting.

How To Prevent Fighting

Cat fights are a natural behavior, but that doesn’t mean they’re welcome behavior. Cats can inflict serious injuries on each other, and everyone will be safer and happier if cats could keep their cool. Preventing conflicts from happening in the first place should be your priority. Here are a few tips to keep the peace.

Spay and Neuter: Intact male cats are the biggest culprits when it comes to starting fights, and a female cat in heat can spark a serious rivalry. Spaying and neutering greatly reduce aggression in cats. 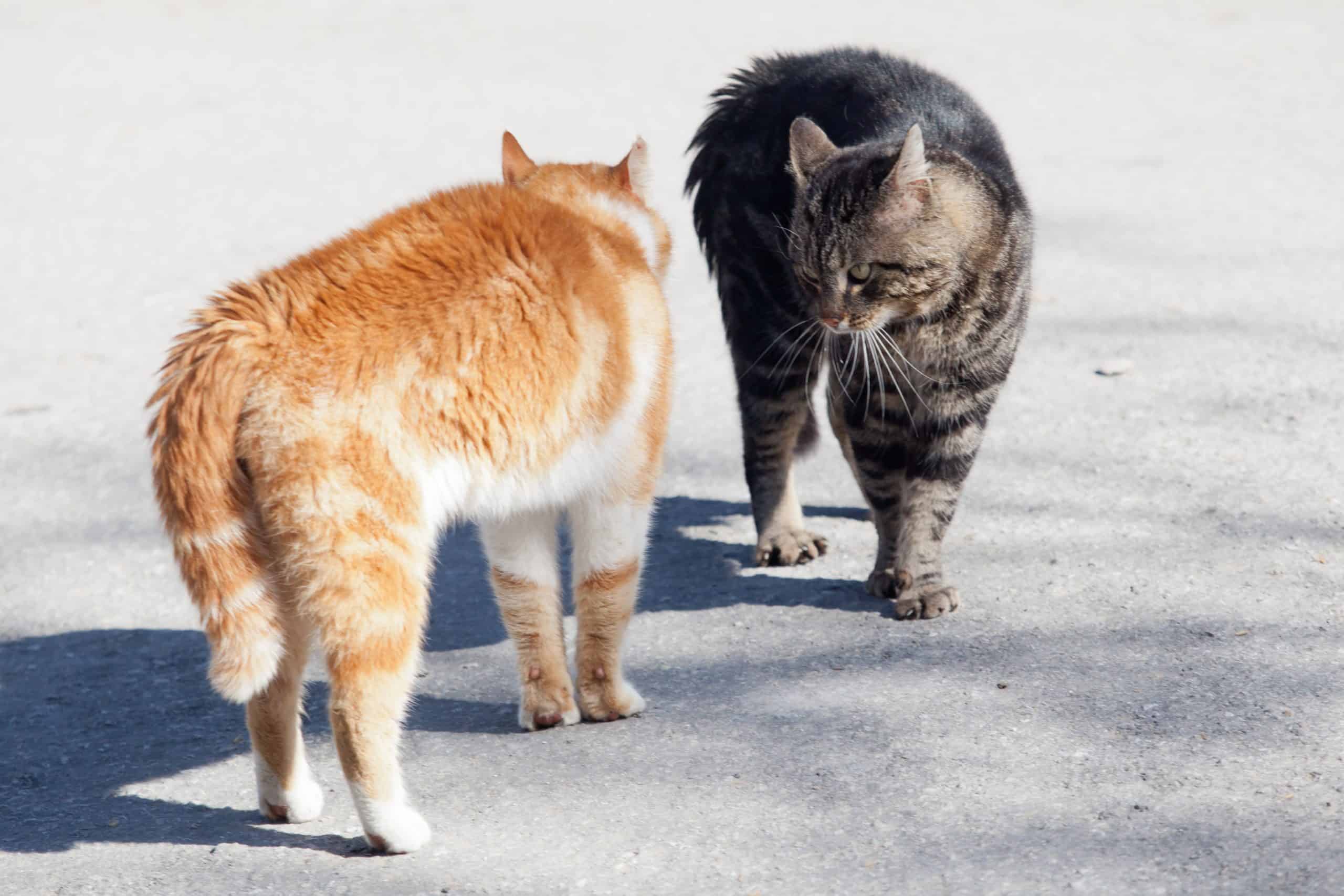 Carefully Introduce New Cats: A lot of fights between indoor cats happen because the new housemates weren’t properly introduced. Take introductions slowly and give each cat their own separate bowls, beds, and litter boxes. You can read this article for more tips on properly introducing two cats.

Separate When Necessary: If two cats are fighting, you can’t expect them to work out their issues on their own. Things will get worse before they get better. It’s best to keep them separated while you talk with a behaviorist about how to best remedy their relationship.

Bring Cats Inside at Night: A lot of cat fights happen at dusk and dawn, because that’s when cats are most active. That’s the time frame when an unfamiliar stray cat is most likely to venture into your yard. If your territorial pet is outside when that happens, there’s a good chance they’ll start a fight. And if you’re asleep and don’t know what’s happening, your cat could get seriously hurt. It’s best to bring them inside at night to avoid potential confrontation.

How To Break Up a Fight

As hard as you try, you might not be able to prevent every fight. So when the claws come out, you need to know what to do.

When it sounds like two cats are trying to kill each other, your first instinct is to get in there and pull them apart. That’s always a bad idea. It doesn’t matter if your cat is your best friend, the second you get close, you put yourself in danger. Angry cats can do a lot of damage, and they can scratch or bite you without realizing what they’re doing. 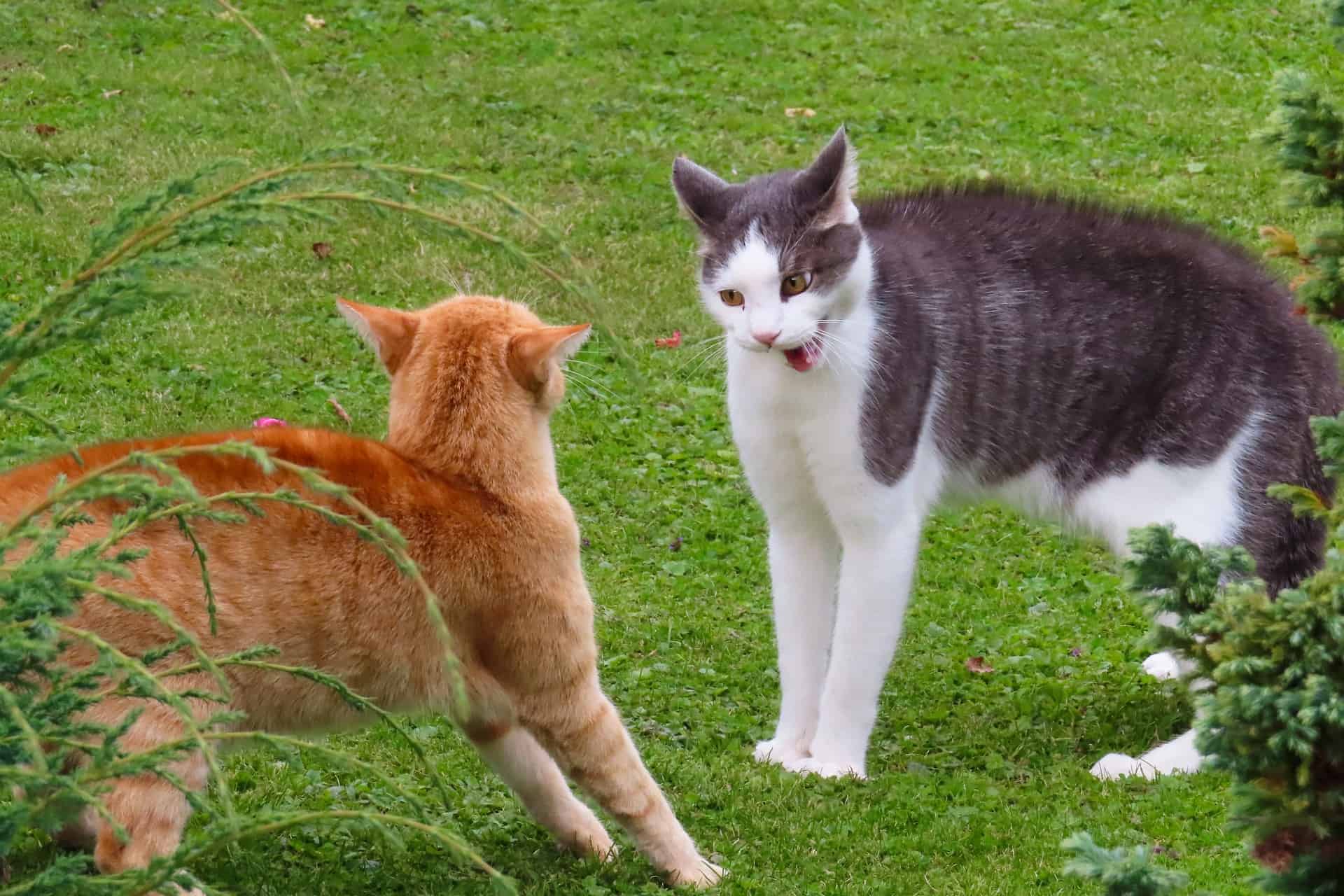 It’s a much better, and safer, strategy to break up the fight from a distance. If you’re inside, try tossing something soft, like a pillow, into the mix. You could also clap your hands, stomp your feet, or yell really loud. A splash of cold water will do the trick, too. Your goal is to distract the opponents long enough for them to separate.

Once there’s distance between the cats, you can use your imposing human form to keep them apart. You’ll need to keep an eye on the cats to make sure they don’t provoke each other into another brawl.

If your cats frequently get into fights, your first step should be figuring out what’s causing the problem. From there, you can work on eliminating the issue or practicing behavior modification. Remember that change won’t happen overnight, and it might be worth it to speak with a professional feline behaviorist.

Did you learn anything helpful about your cat’s behavior? Share this article with your fellow cat owners to help them out, too!