I will be the first person to tell you that wild animals should be wild. But sometimes there are circumstances beyond the animal’s control which would make living in the wild more of a danger to them. This is one of those tales of a few big cats which wouldn’t stand a chance in the wild. And thankfully for them, they have two dedicated cat parents which make sure that their kitties are living their best lives possible. I came across the story of A Bobcat’s Tale, and the couple which has adopted these cats allowed me to share their story with you all.

Everyone, meet Cairo and Monaco…and Rio, too! 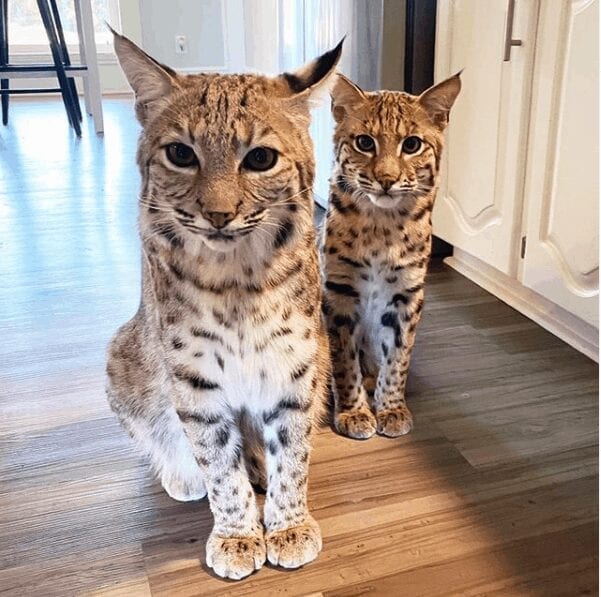 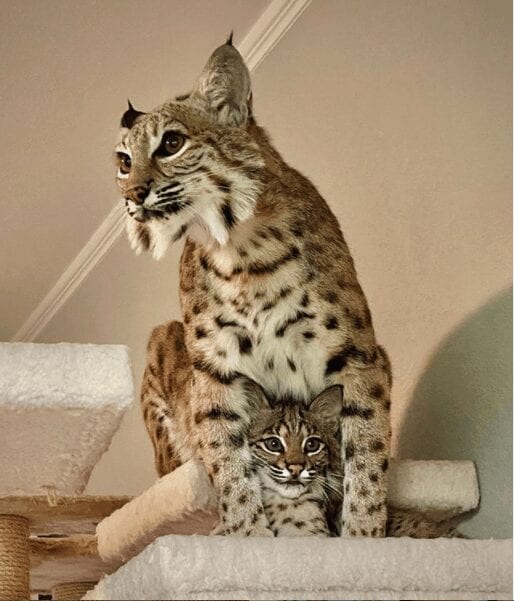 The two bobcats were the first private adoption for a bobcat sanctuary in Texas, and Mick and Melissa McAllister were fully prepared to give these cats the second chance they deserved. As we know, laws for buying and housing big cats vary from state to state, and for these bobcat girls, they were declawed by their previous owners who surrendered them after they proved to be too much to handle. Leaving them defenseless and having only been indoors their entire lives, being released to the wild was simply not a realistic option for the feline pair. These cats had never been outdoors, and were hand-raised and bottle fed from birth, so human interactions were all they’d ever known. 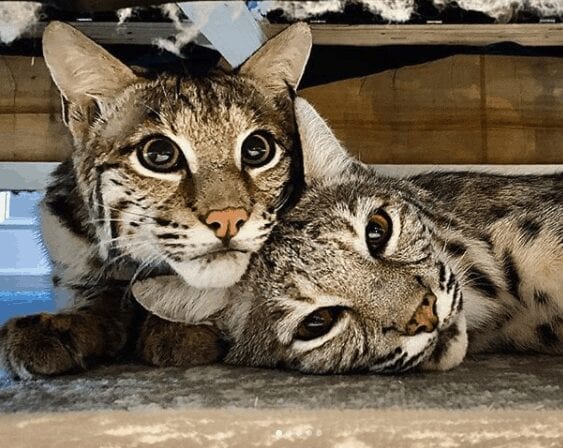 The McAllister couple dotes on these cats a great deal, and they are committed to their safety and care above all. The pair they took in from the National Bobcat Rescue and Rehabilitation facility in Terrell, Texas have fully adjusted to their new life with the couple, and feel right at home whether they’re counter surfing, wrestling, or pouncing all about their super high cat window perches. The couple even designed a super deluxe—and super safe—catio for the cats to enjoy some time in the sunshine and fresh air.

Val Marler of the National Bobcat Rescue and Research Foundation says that, “Most of the cats that come to us come to us because people have gotten in over their heads.”

(If you’d like to learn about the work she does, or you’re kind enough to share her efforts or make a donation for injured, sick, and displaced wildlife, you can do so here.) 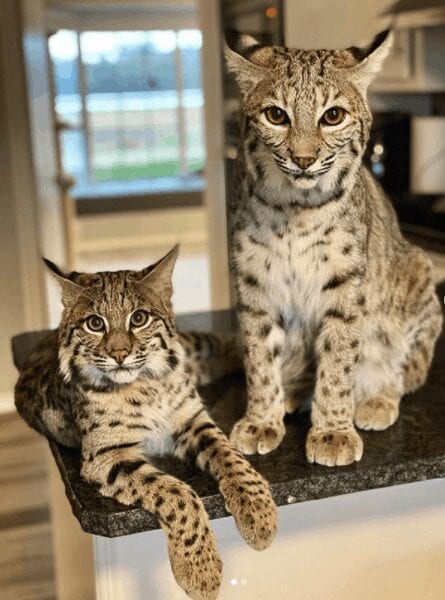 And while Mick has always dreamed of owning a big cat, just as many of us would, he didn’t have the heart to do that. So, when this truly unique situation presented itself, it was a purrfect match to fulfill a lifelong dream of being able to live with a big cat. The couple was willing to invest the time and were financially prepared to take in these cats, and have clear intentions of keeping these cats until their last breath on this earth.

Melissa was kind enough to answer some questions I had about her big house cats, and you can find my questions and her answers below. 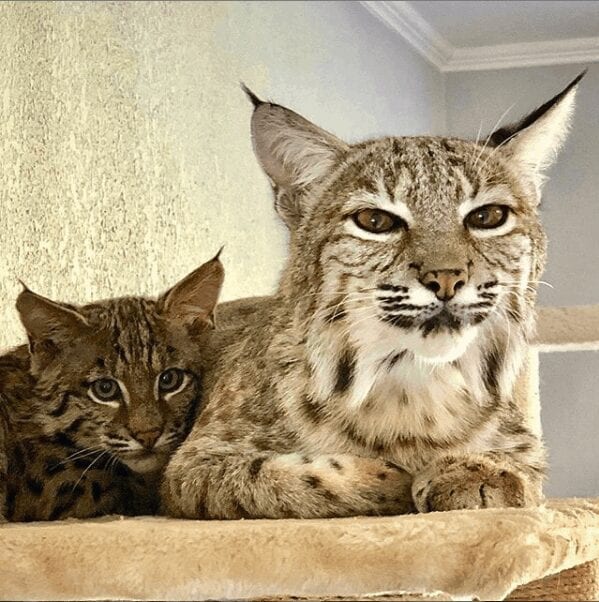 What are their favorite things to do?

“Just like any other cats, their favorite things to do or eat, sleep and stalk and wrestle one another.” 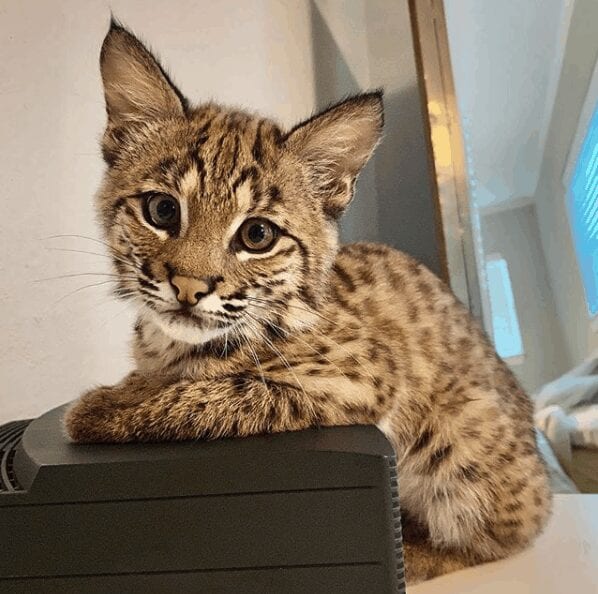 I see there’s a new addition. Can you tell me a little about Rio and how she came into your lives?

“Rio was either abandoned or orphaned and picked up by the local animal control. Ironically, they attempted to keep her as a pet for a while, until they realized how hard they were to have, and during that time she became very reliant on humans.”
“Once that happens, they don’t survive the wild for too long because of the mass amount of hunters that like to shoot them for trophies. If they are not elusive to humans… They are found quickly.” 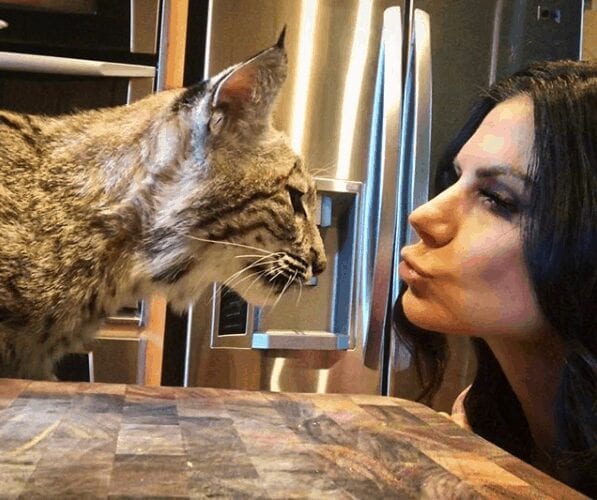 What’s something special you’d like people to know about your bobcat house kitties?

“They take a lot of work, time and money to have. I really don’t think they should ever be pets but there are circumstances when they are safer with us than in the wild. We also feel this is a better environment than a cage at a sanctuary or zoo. Although I may not make it look too tough to live with these beautiful creatures… They do a lot of damage to the house and to me… LOL! They mean well they are just incredibly powerful.” 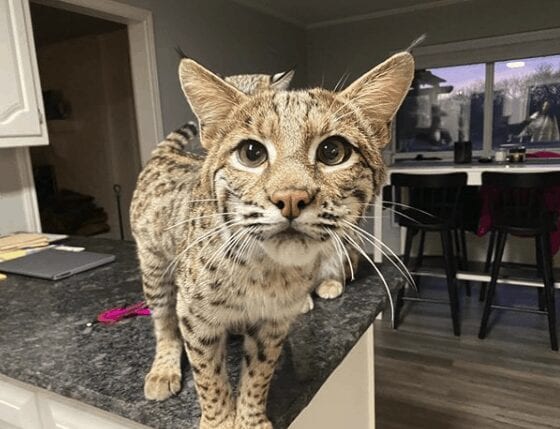 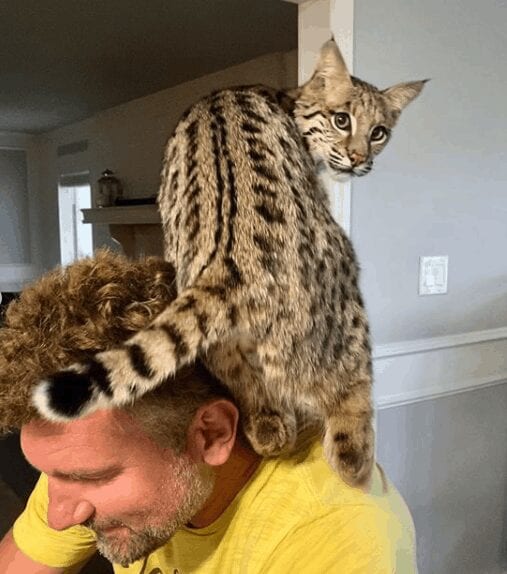 I’d like to give a special thank you to the McAllisters for allowing me to share their story and their awesome photos of the kitties with you all. I commend them for giving these cats a place to call home for the rest of their days, and for also being proactive about educating the public not to try this at home. For these cats, they are safest with them. And it’s clear to see just how happy they are with their cat mom and dad.

If you’d like to keep up with these pretty kitties and their daily antics, you can find them on Instagram here.

In Russia, there’s a puma named Messi whose life was spared thanks to a loving couple who took him in after rescuing him from a rundown zoo. He’s about two-thirds the size of the average male puma, but this 90 lb house cat acts just like your average feline. Read about him here on cattitudedaily.com. 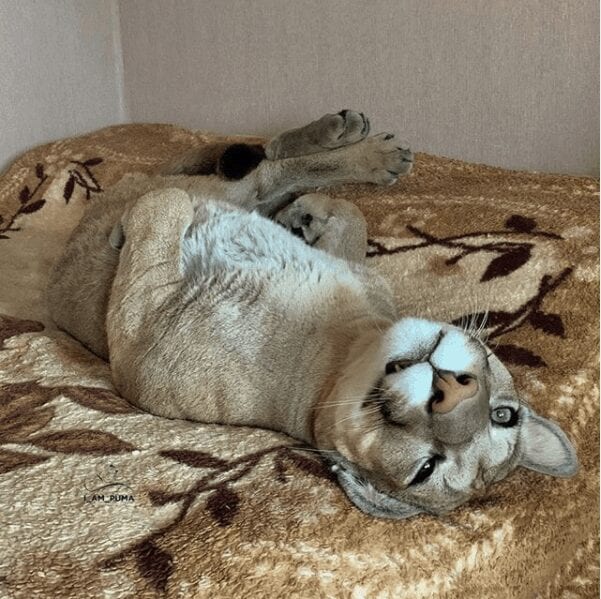 All Images Courtesy of A Bobcats Tale on Instagram

Cat Dandruff: Why It Happens And Ways to Help Your Kitty

Should I Change My Cat’s Name After Adopting Them?