What’s a way to pay homage to how awesome cats are? We’ve got an idea – dedicate cat monuments to them! That’s exactly what many folks did. You’d be surprised to learn how many famous feline monuments there are in our world.

Let’s discover the most famous feline monuments all around the globe! 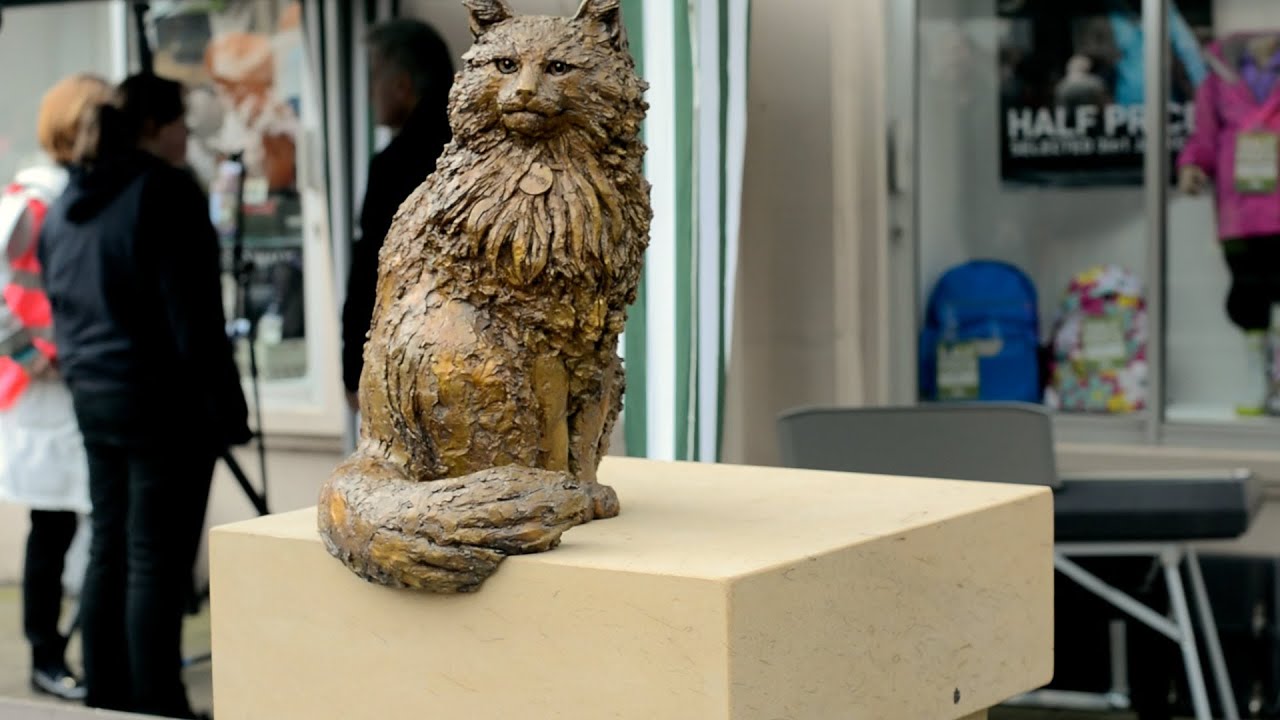 In the historic city of St. Andrews, you can find a statue of Hamish McHamish, a ginger cat that the whole city loved. Hamish was a bit of a nomad, traveling to houses and businesses, spending time with everyone in the city.

The city adored this cat so much that they began a fund to install a little monument in this kitty’s honor. Designed by Scottish sculptor David Annand, Hamish’s statue was finished in 2014. Sadly, that same year, Hamish passed away. But, his cat monument remains to celebrate his furry legacy.

Of all the feline monuments, this one really touches our hearts. In downtown Braunschweig, Germany, a statue stands in honor of all the homeless cats in the city. This monument, created by the German sculptor Siegfried Neuenhausen, stands as a symbol of appreciating all the kitties in town who don’t have a loving roof over their heads. 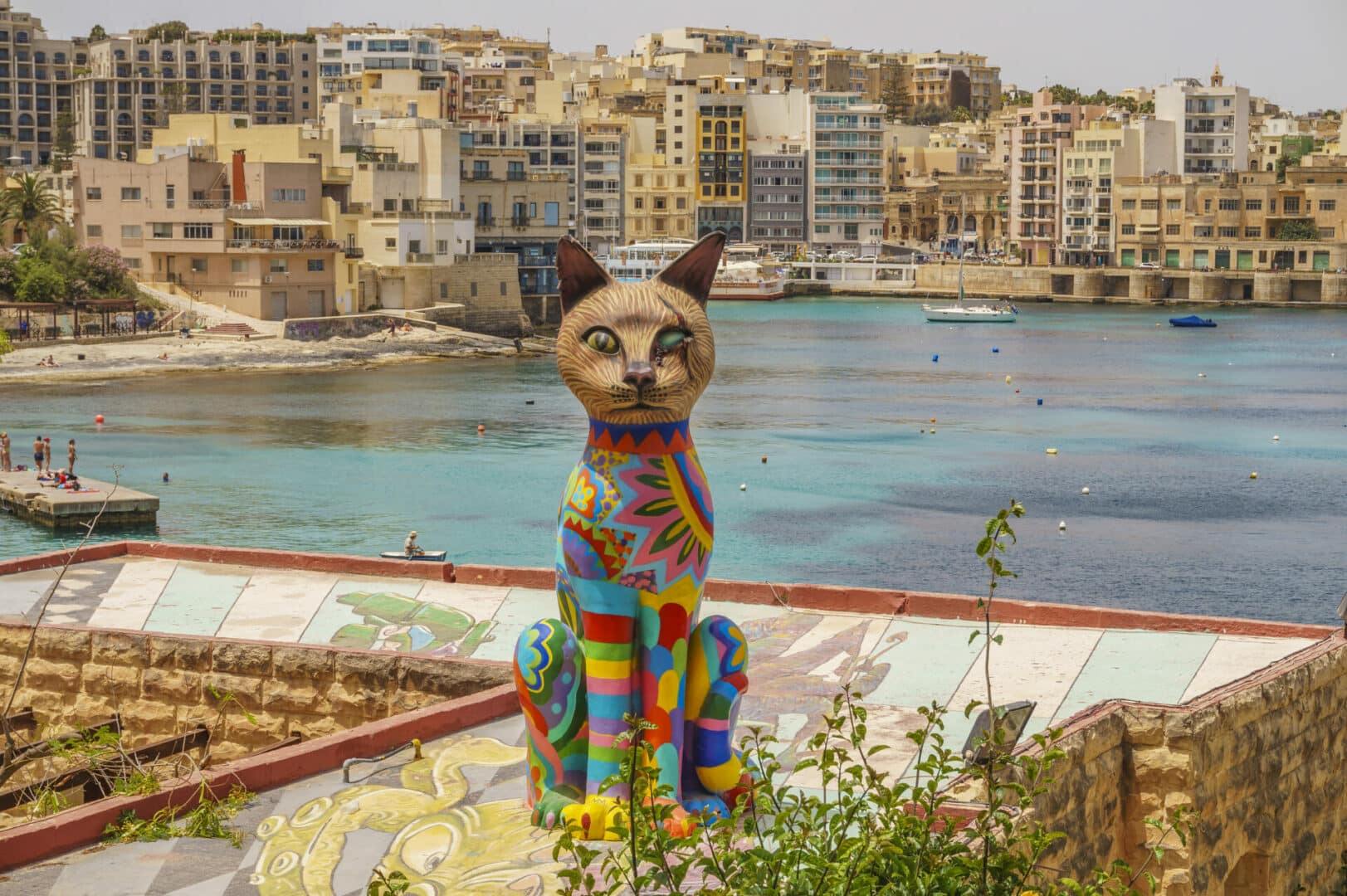 This big ole cat monument sits in a park by Balluta Bay, in Sliema, Malta. The blue waters make an amazing contrast for this super colorful statue, which represents all the pretty and friendly local cats that hang out in the park. It’s probably the most colorful of the feline statues out there. Want to learn all about the famous cats of Malta? Read about them here on CattitudeDaily.com! 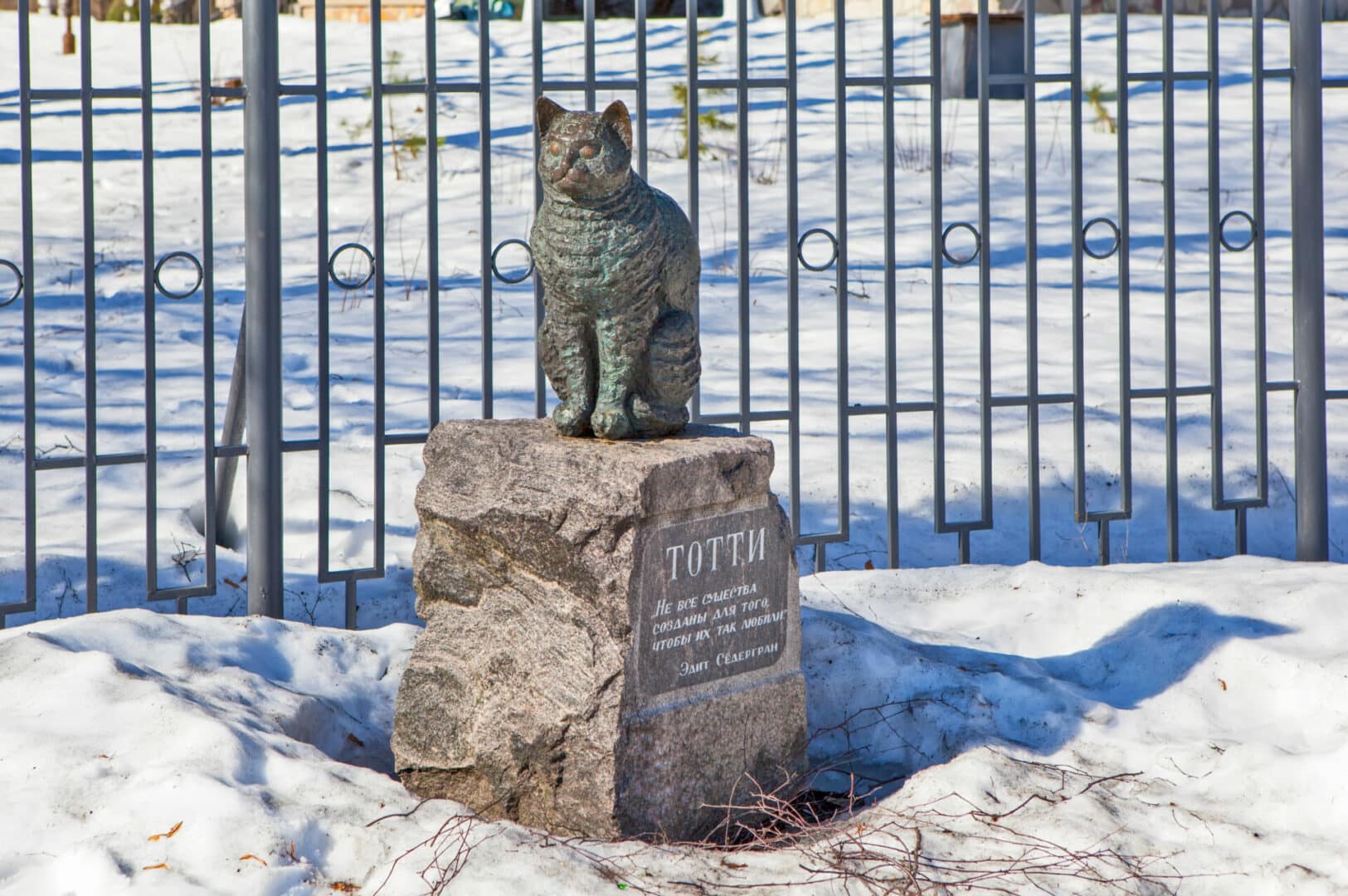 If there was an award for most loyal kitty, it most likely would go to Totti. This little kitty belonged to Edith Irene Södergran, a Finnish poet who lived in Roshchino, Russia. After this poet passed away, Totti did not handle it well. The cat refused to eat or drink, visiting Södergran’s grave every day. Tragically, the kitty died from such a broken heart.

The Finnish sculptor Nina Terno erected a statue in this faithful kitty’s honor, which you can find in the village of Roshchino today. It’s one of the only feline monuments we know of in Russia. 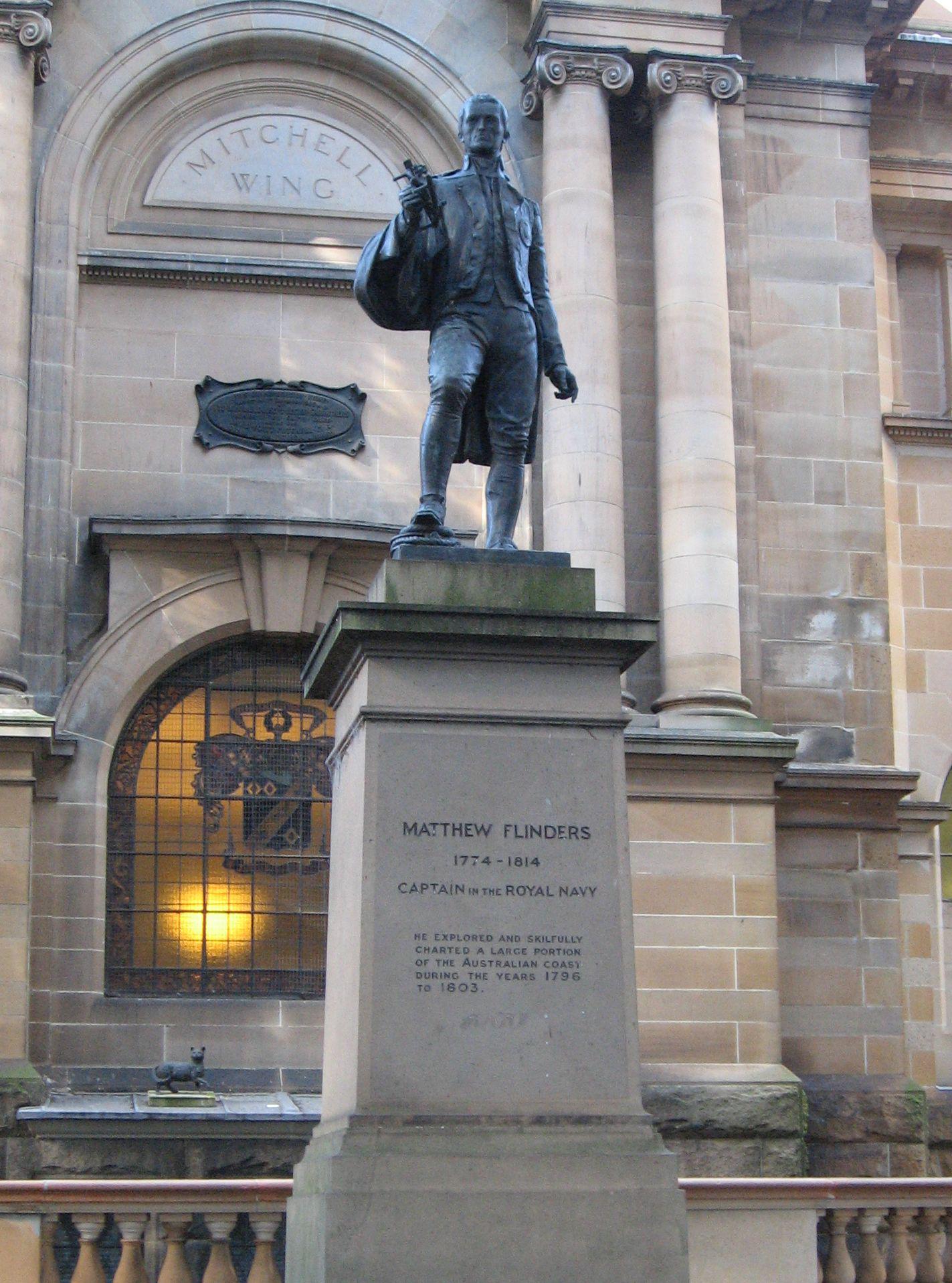 Trim was a seafaring kitty who traveled the world with the British navigator Matthew Flinders. This tuxedo cat had serious sealegs, being able to sustain sea travel all over the world (and even swim back to his ship when he fell off as a kitten!)

When Flinders was imprisoned in Mauritius, Trim disappeared. To remember such an impressive kitty, a statue of Trim was designed and placed nearby Flinders statue in Sydney, Australia. 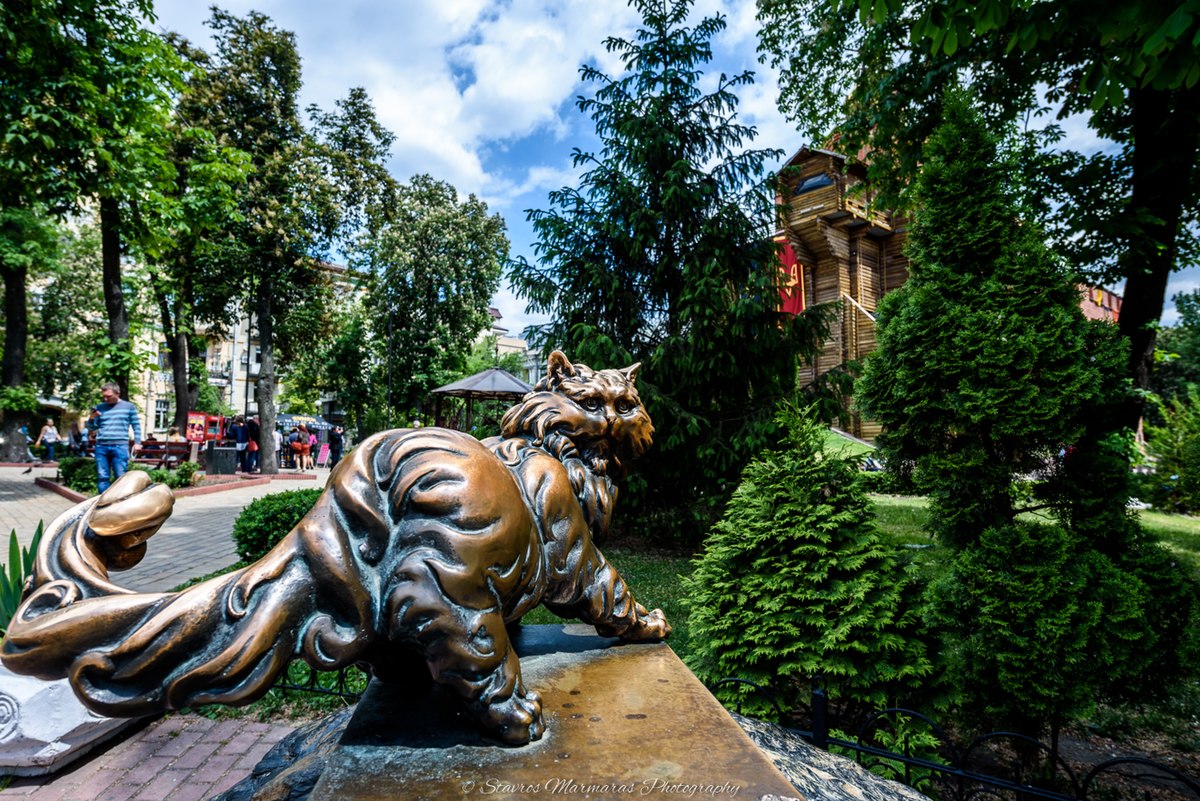 A mascot of a popular local restaurant, Panteleimon was a gray Persian cat that everyone loved. Unfortunately, a fire burned down this restaurant, killing this kitty. To honor Panteleimon, a statue now stands of this fluffy cat in a park. Locals say rubbing its tail can bring good luck. 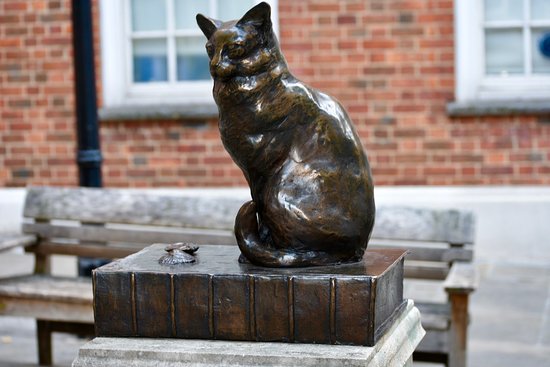 The English writer Samuel Johnson had truly adored his cat, Hodge. In 1997, the city put up a bronze statue of Hodge in Gough Square, so that the writer and his cat’s bond can be remembered forever. There are no other feline monuments in London. 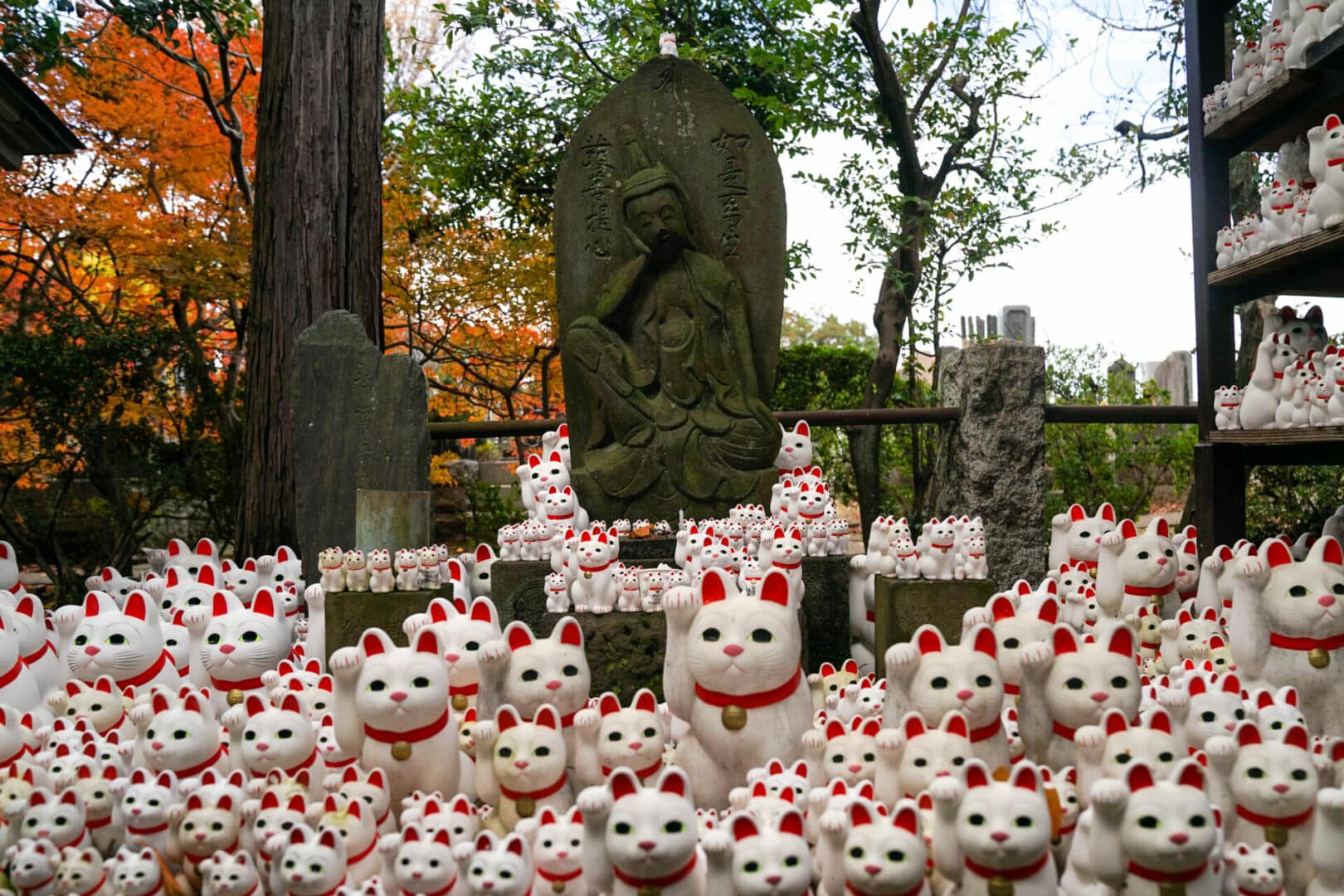 Looking for some feline good fortune? Of the feline monuments, this one could give you some serious luck! Gotokuji is a Buddhist temple that is most likely the birthplace of the maneki-neko, or the luck-inviting cat figurine. This temple is filled with tons of these figurines, all said to be major good luck symbols!

The fate of Mrs. Chippy demanded that this kitty be remembered forever. Another sailing cat, Mrs. Chippy lived aboard the Endurance, a ship navigated by Sir Ernest Shackleton. Yet, Mrs. Chippy was most likely Harry Mcnish’s cat, the ship’s carpenter. When Shackleton realized that Mrs. Chippy, and all the traveling pets, were a liability, he killed her.

To celebrate this kitty’s legacy, the New Zealand Antarctic society created a bronze statue of Mrs. Chippy to rest on McNish’s grave.

Towser the Mowser in Perthshire, Scotland

Of the feline monuments, this might be the most impressive. Scotland’s oldest distillery was home to one mighty cat – Towser the Mowser. This cat protected all the grain by killing 28,889 mice around the distillery. Towser apparently lived to be 24 years old too. 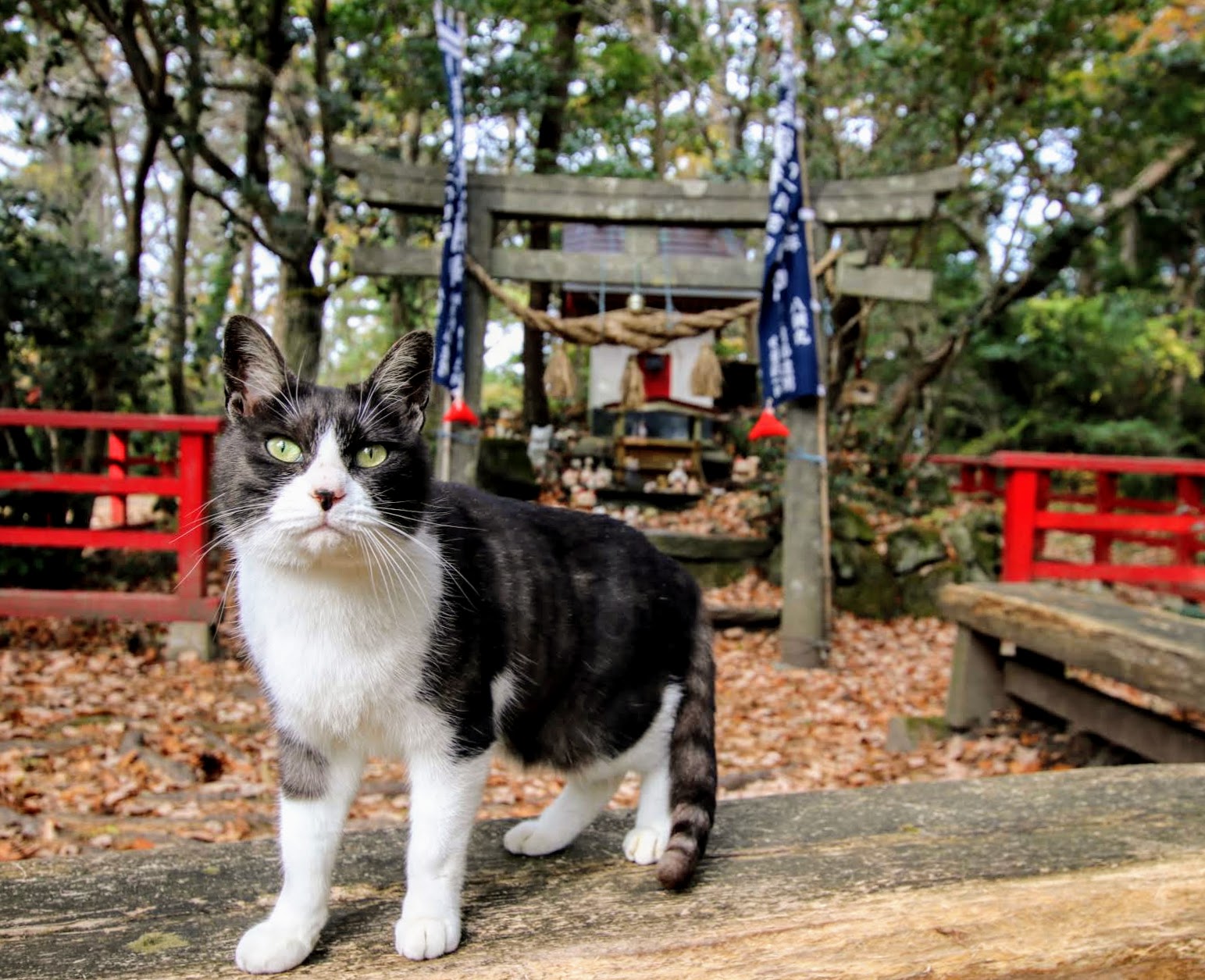 This isn’t just a monument, but an entire island dedicated to cats. Tashirojima is also known as “Cat Island,” as it has more cats than humans. This cat island is very easy to reach from Tokyo, making it an easy place for cat lovers to exist.

Have you ever visited any of these feline monuments? We’d love to hear your stories and thoughts on all of them.

Weight Loss in Cats: What You Need To Know