Do you believe in fate? Well, you might after reading this story. As a person who has made a living for years on writing about cats, I see countless stories about cats online every single day. But, when I came across this fateful tale in my Tuxedo Cat Lovers group on Facebook yesterday, I literally got chills. The universe works in mysterious ways sometimes, and Toesie’s story is proof of it. I reached out to Susan, Toesie’s owner, and asked if she’d allow me to share this beautiful story of one tuxedo cat that was simply destined to be in her life. Keep reading to learn about Toesie’s tale, and I promise it’ll make you smile from ear to ear! 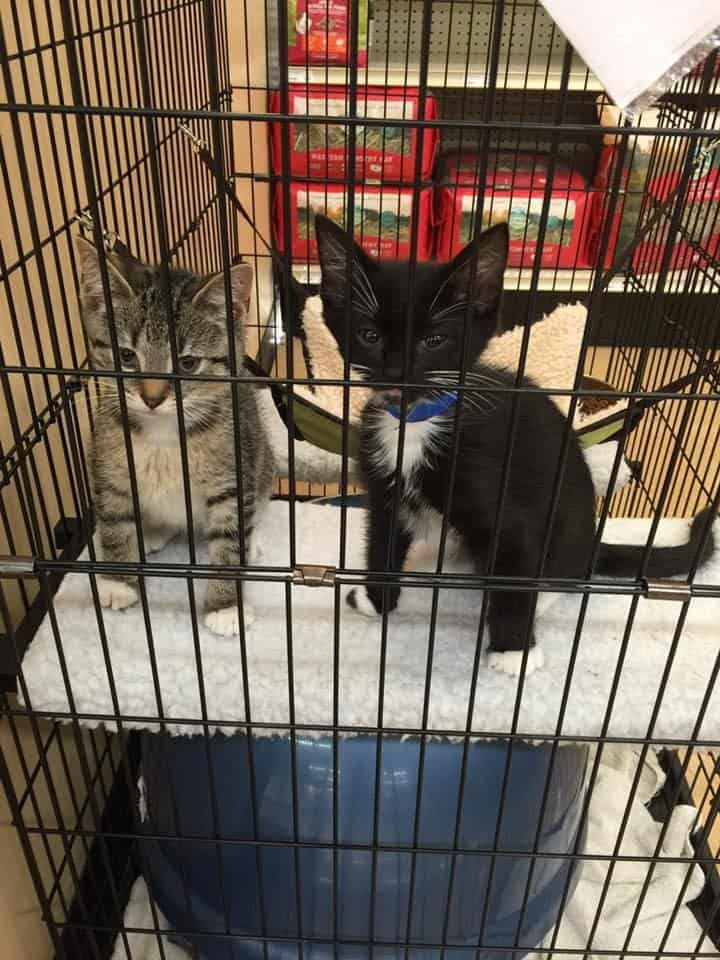 See, Toesie—then called Sprocket—featured above. At the time, he was just an eight-week-old kitten in search of a forever home that Susan had seen online. She recalls that,

“In September of 2016, I shared this picture of two kitties from our Humane Society. I was especially hoping that someone would get the tuxedo, then named Sprocket, as tuxies are my weakness. I already had many cats, which is why I didn’t get him then.”

But it seems that Toesie—AKA Sprocket—would find his way to her field of view once more. But this time, he’d plant himself as a hungry stray cat right on her front door step! Susan says that,

In April of 2017, about nine months later, this hungry tuxie who was starving and had been out on his own for a while, came right up to the door. I fed him canned food, one can, then two, and then he was working on a third. I was afraid his poor little tummy would explode. He wasn’t used to being around people, but I figured I would work with him and take him to the Humane Society. Oh, sure. We found out later when we took him to the vet that he had been chipped at the Humane Society and had previously belonged to someone in our neighborhood. They had never contacted the HS about him being lost, so we were allowed to keep him. (I was panicked there for a minute). He has the same color markings as our Sadie, and at first the way to quickly tell them apart was through the black patch on his white paw, therefore we named him Toesie. 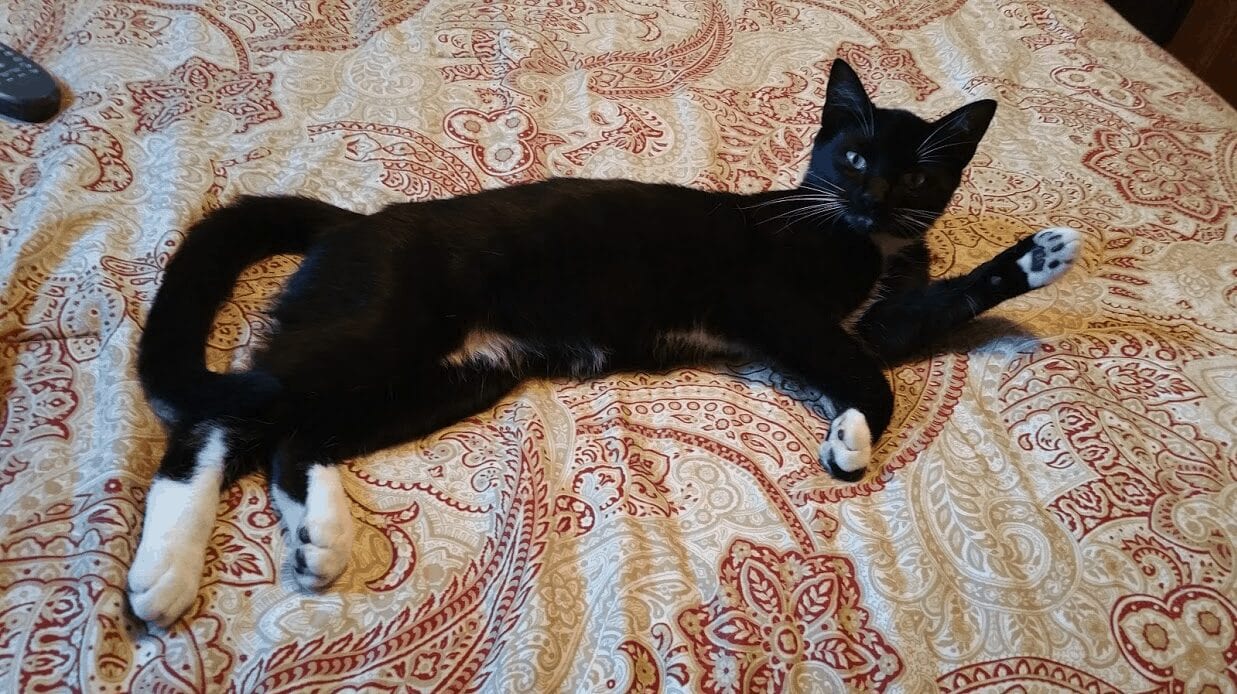 As you can see, he instantly made himself right at home—on Susan’s bed!

I didn’t realize until the first pic showed up in Facebook memories that Toesie was originally Sprocket and a cat I really wished I could have. Well, he’s been with us now about three years and has developed into a big and beautiful kitty.

He loves being outside and is a protector of our yard and the other kitties when they’re out. He is the cat who most enjoys me picking him up and loving on him. He’s not a lap cat (maybe because there’s a lot of competition), but does enjoy affection. I’m so happy we ended up with him, after all!

I asked Susan a few questions about Toesie, this cat who knew exactly where he needed to be. Susan was kind enough to answer them—and share lots of cute photos with me! Keep reading to learn about this serendipitous feline… 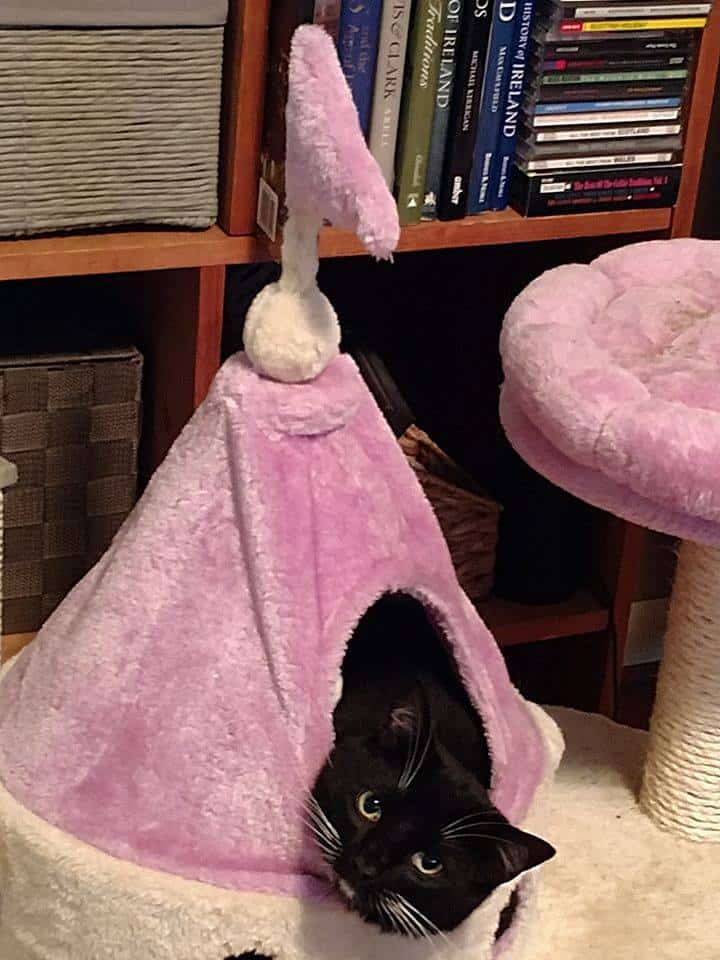 What Humane Society did you take him to?

He came from the Franklin County Humane Society in Kentucky. I actually took him to a vet’s. They did the scan. Honestly, I didn’t think about that at first because I felt that he was abandoned. Although they told me his name at the time, I didn’t make the connection with the picture until I saw it come up in Facebook memories. I share a lot of their cats (and occasionally a dog) and I don’t delete the pictures, because I like to see their update about adoption. 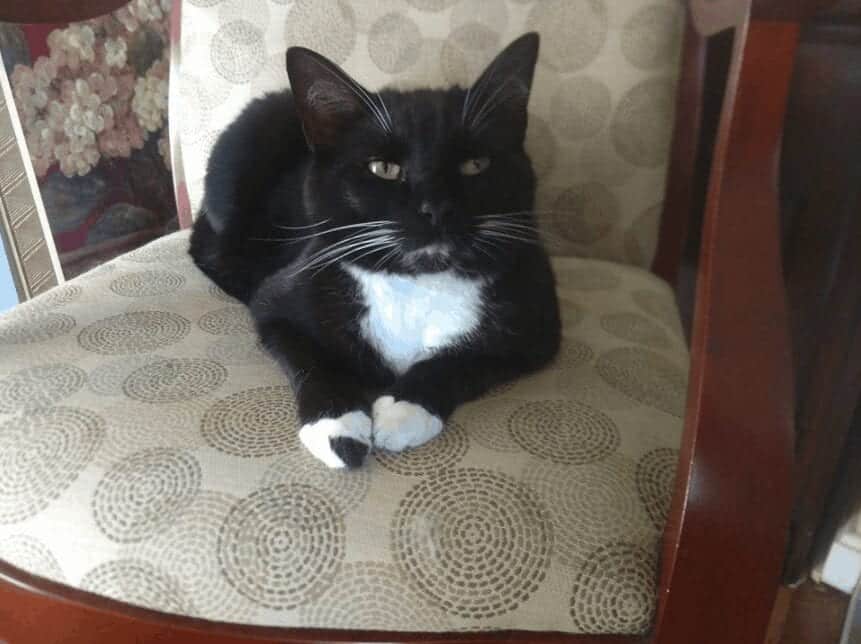 He is affectionate with my husband and me, but is aloof. He prefers to sit in the chair that was shown in the picture or at the top of one of the cat trees. When I get home, he’s usually outside and wants to be petted and to rub against my legs before coming in. We have an occasional mean kitty in the neighborhood, who ironically looks like him, but wears a bell. Toesie patrols the yard and defends our/his territory. He probably gets along best with our 15 year old orange Manx, usually shown by them licking each others’ heads before meal time. He can occasionally be mean to the other cats when he wants to go out and we’re not responding quickly enough. 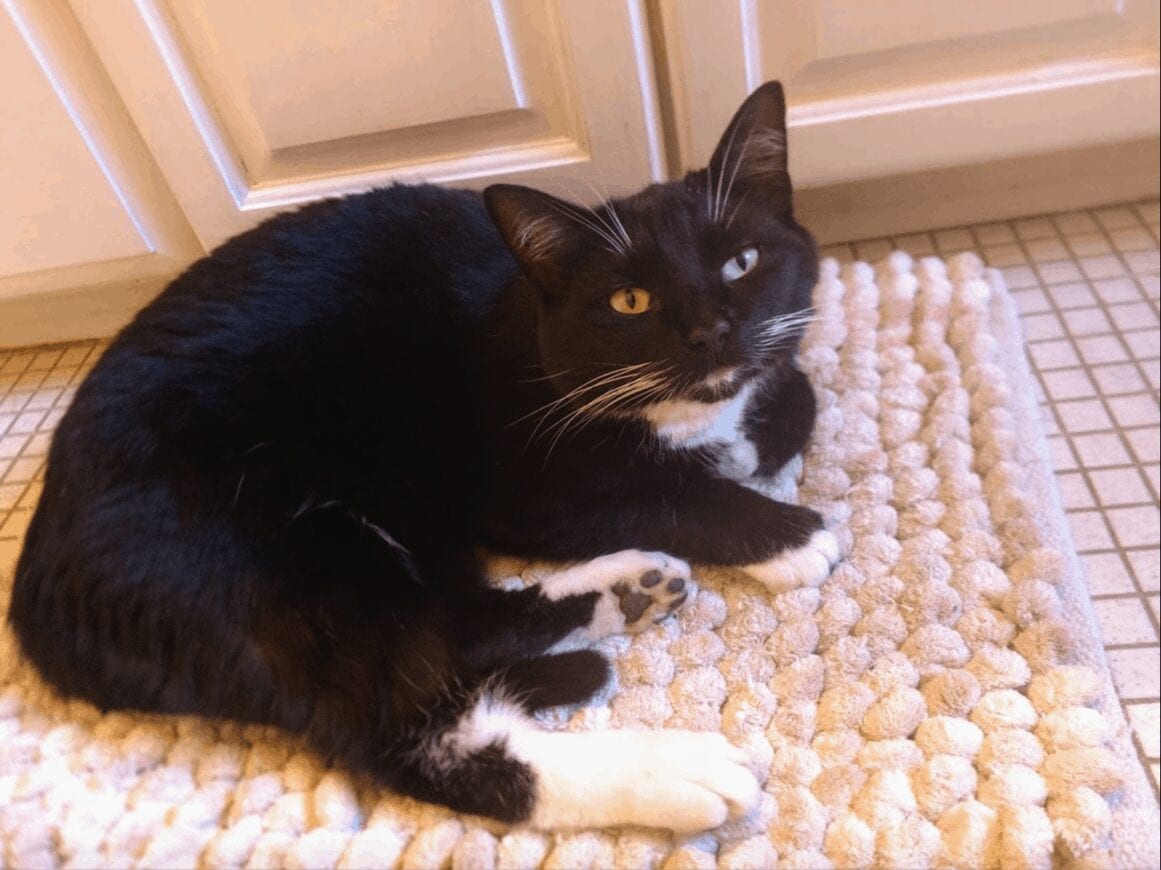 When he’s inside at night, a favorite place to sleep is on a bath mat.

I’d like to give a special “thank you” to Susan for allowing me to share her and Toesie’s story with all of the Cattitude Daily readers. The world can certainly use more uplifting stories like this one. If you know someone who would enjoy this lovely story of a cat finding it’s happily ever after, share this with them!