When you have a unique look, sometimes you instantly get noticed. For Angel, other cats at the shelter were not very nice to her. She has a unique look that kinda makes her look as she’s angry all the time. Kaetlyn Koch of Portland, Maine was lending her time at Chittenden County Humane Society and stumbled across a photo of a unique looking feline who was being held safely in an employee’s office because the other shelter kitties kept treating her unfairly and attacking her.

Koch told TODAY, about the now famous kitty we know as Loki Kitteh:

“At the time I had no interest in taking in a fuzzy companion. But I had to meet her.” 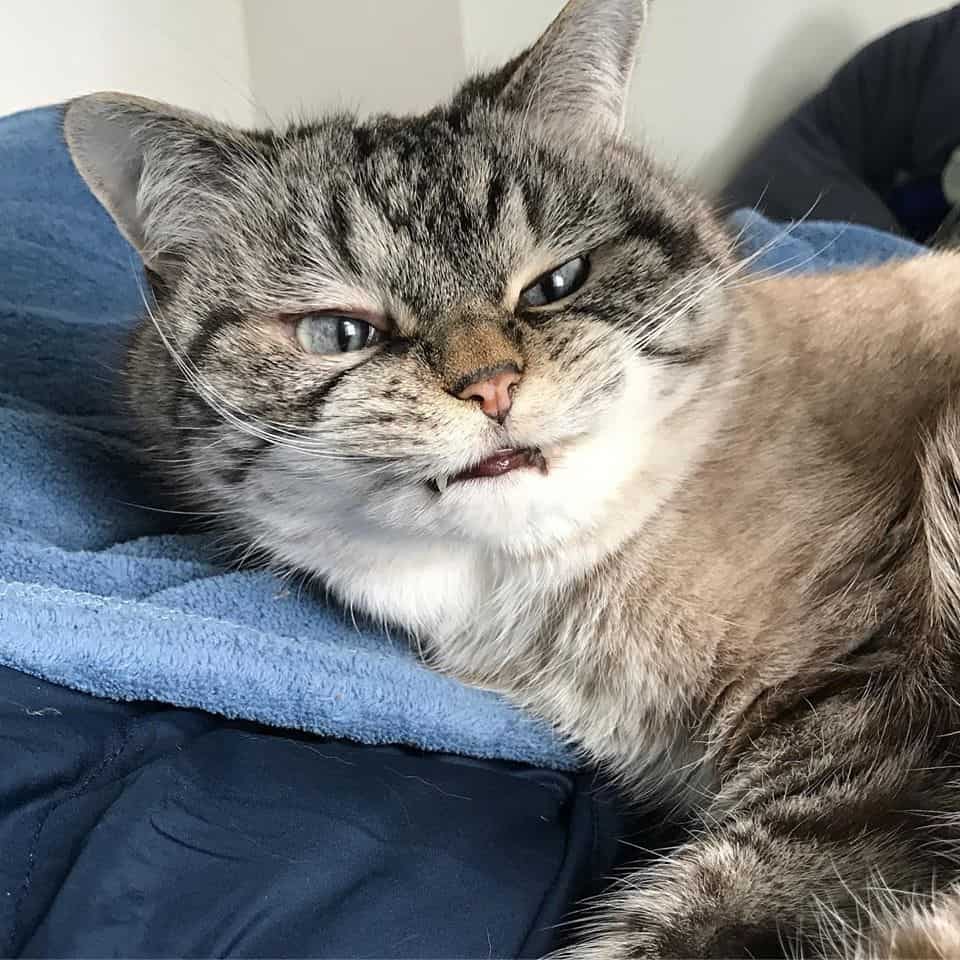 Meet her she did, and as they say , the rest was history!

“I was brought to the office and they pulled open a desk drawer to reveal a very perturbed looking feline,” Koch said. “She was huddled all the way to the back and glared at me with those big blue eyes, and the girls explained to me that she was very shy, but occasionally showed affection to specific employees. They fed her a few treats and then allowed her to retreat back into the darkness of the desk.”

And the very next day she brought this adorable vampire cat who she appropriately renamed Loki Kitteh to come home and live with her. 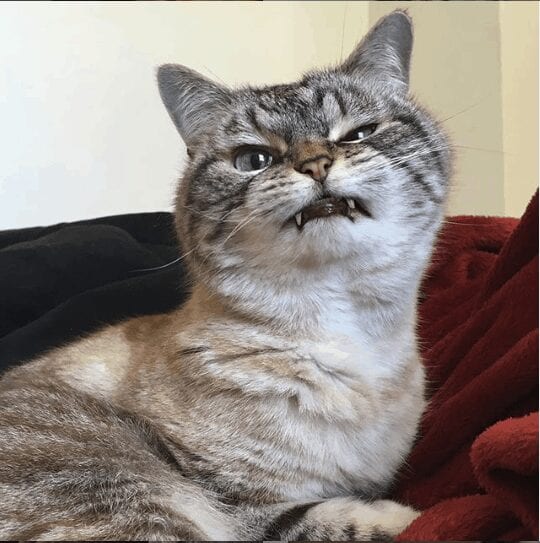 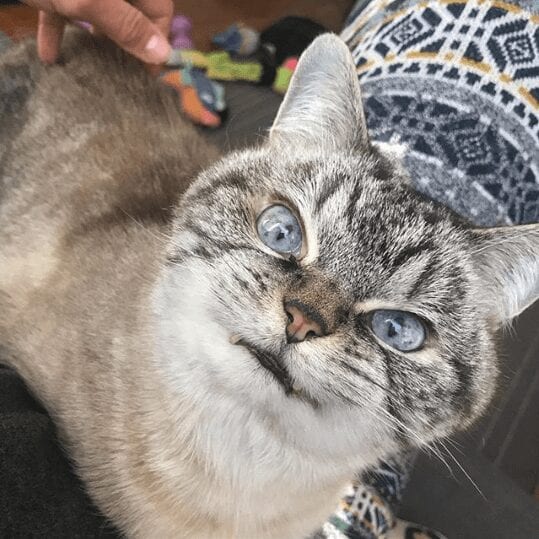 Loki’s name pays homage to a god in Norse mythology, and the name seemed much more suitable than angel for a kitty with fierce fangs and a cute grimace.

Although this shelter kitty was timid at first, her cat mom reports that she’s been nothing but loving once she settled in and learned to trust. Koch said, “She’s the most loving and snuggly cat I’ve ever had.” 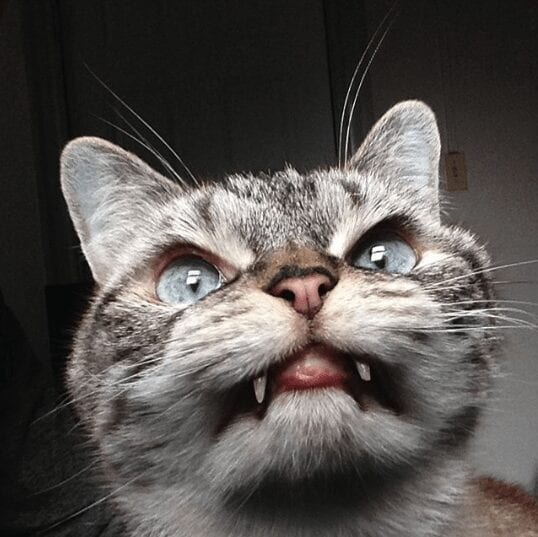 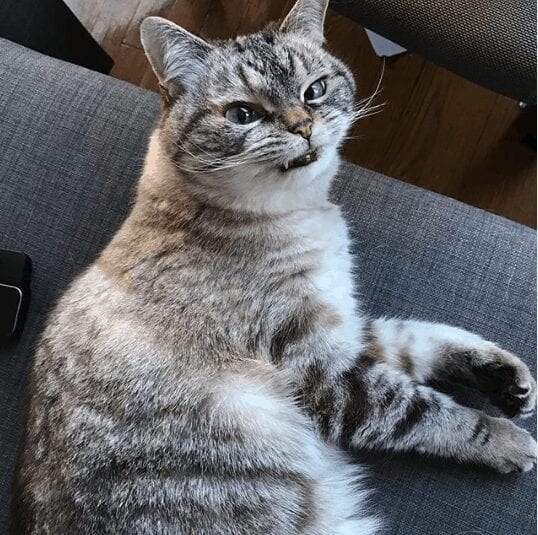 For Loki Kitteh, she is reportedly in good health and has good vision, despite the fact that this sweet girl must sleep with one eye open as it will not fully close. But, really, that just makes her ever more the feline vampire! Koch doesn’t know much about her cat’s past, and she adopted Loki when she was around 8 years of age. Perhaps it will remain a mystery, just as her cute appearance is. Either way, her dedicated cat mom spoils her to make up for lost time. 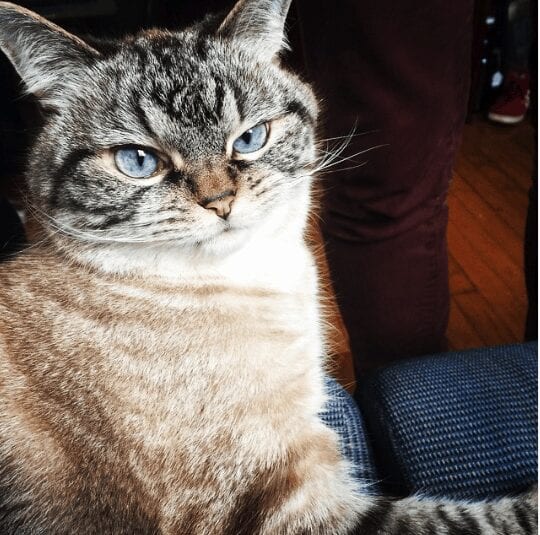 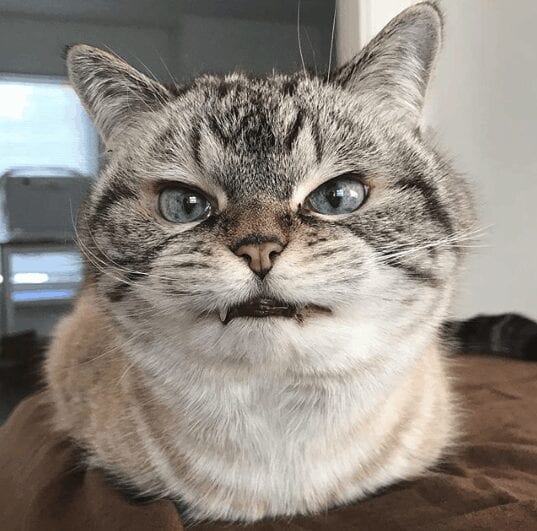 The senior gal spends her days being oh-so-adorable and purrfectly photogenic, and in just the five years that she’s been a feline cat celebrity, she’s amassed an impressive fan base. Her 473k and growing fan base on Instagram get to oh and ahh over her natural adorableness that she effortlessly displays daily.

Loki Kitteh, you are simply the cutest kitty! If I were your cat mom, I’d get nothing done all day because I would just stare at you and smile. Want to keep up with this pretty lady on social media? You can find her on Instagram @Loki_Kitten, and/or on Facebook at The little Vampire Cat.

Have you seen Monk the vampire cat? He’s one of our favorites, too! 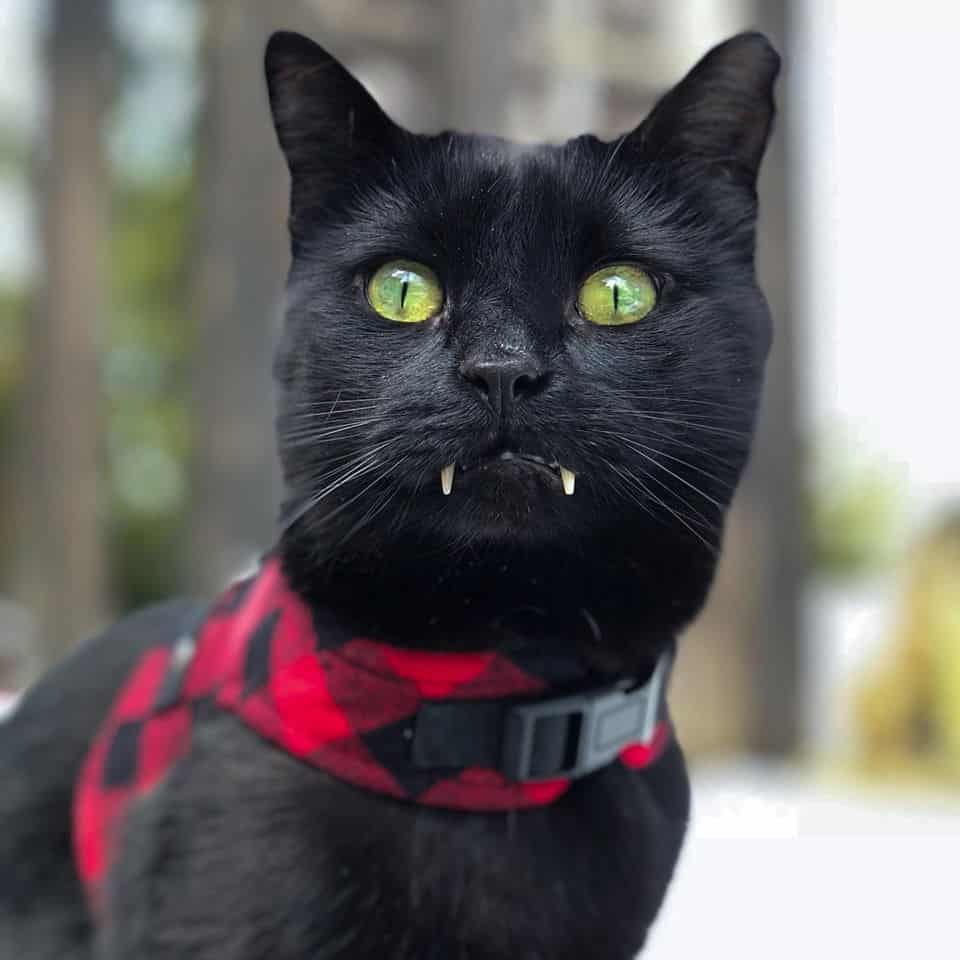 It’s officially spooky season, and this black cat comes equipped with the best built-in costume. Everyone meet Monkey, the black cat with Dracula teeth. Don’t worry, this vampire cat’s teeth make him look like he’s ready to suck your blood, but his mom says he’s sweet as can be–and yes, those teeth are real!

Monk, as a wee kitten, his owner saying that, “Monk came to me as a starving, bug infested kitten. He was filthy, weak and had severe double eye infections.” 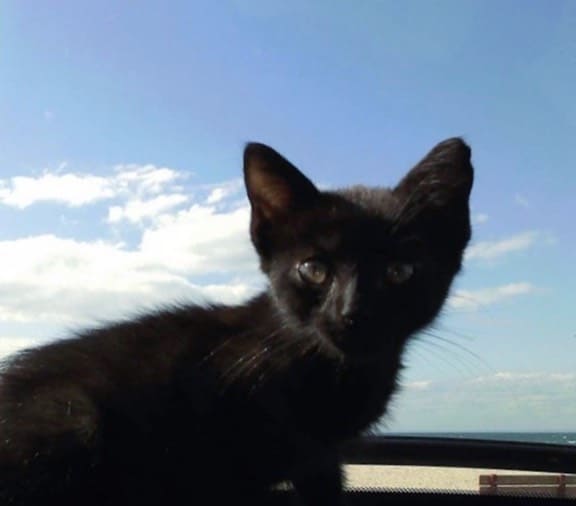 Rescued From the Road

Nicole Rienzie first met Monkey when she rescued him from the middle of the road. She was with her mom driving home when they had to hit the breaks to avoid running over a tiny, black ball of fur. The pair found the kitten looking scared and sick. He was too skinny, infested with fleas, and he had a nasty eye infection that impaired his vision.

Ready to help, Nicole got the kitten the care he needed. Her original plan was to find someone to adopt her newly found cat, but that didn’t last long. She felt connected to the homeless kitten, and she decided they belonged together. She named him Monkey, and despite hurtful stereotypes, she learned black cats are anything but bad luck. Monkey was silly and sweet, and she and her black cat formed a great bond. 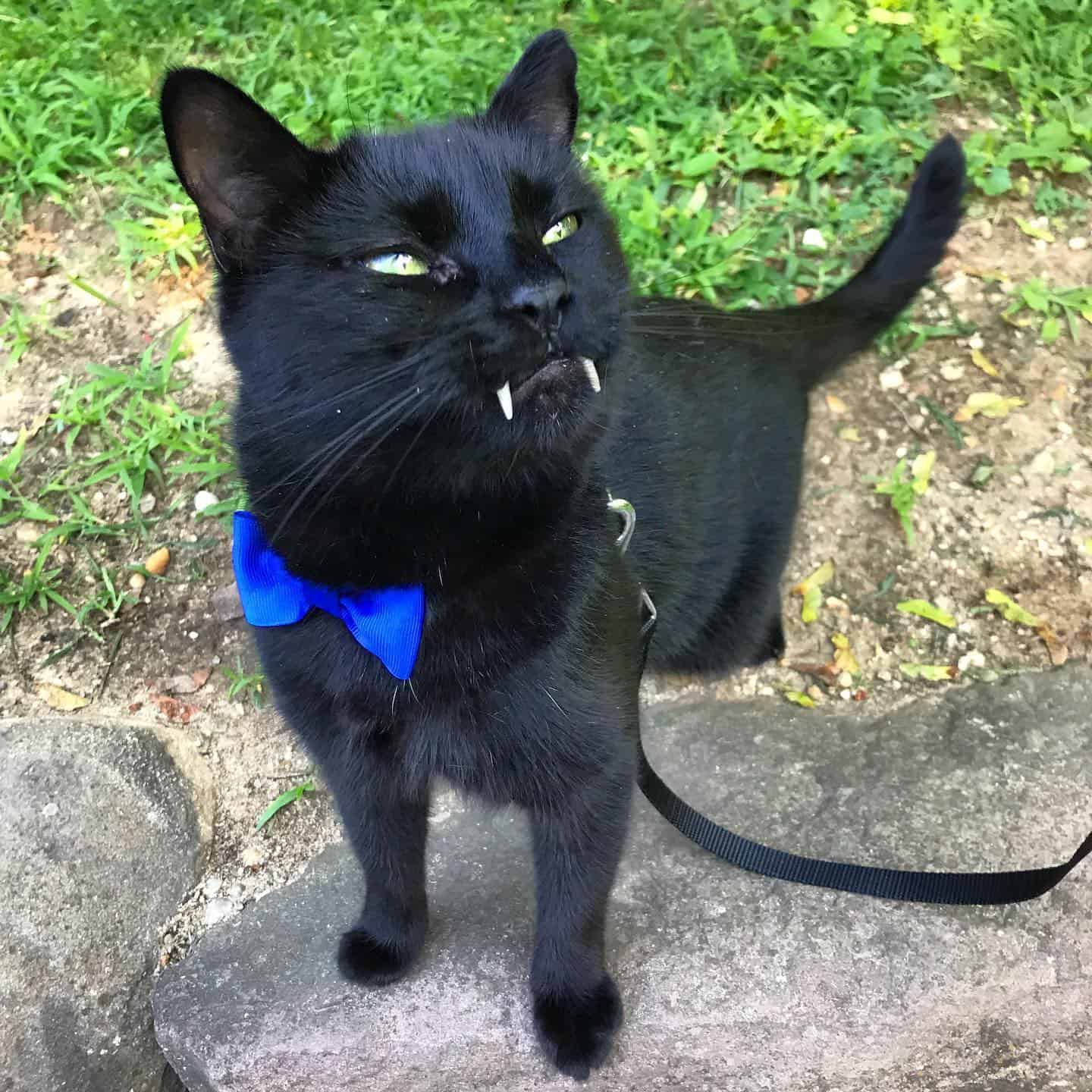 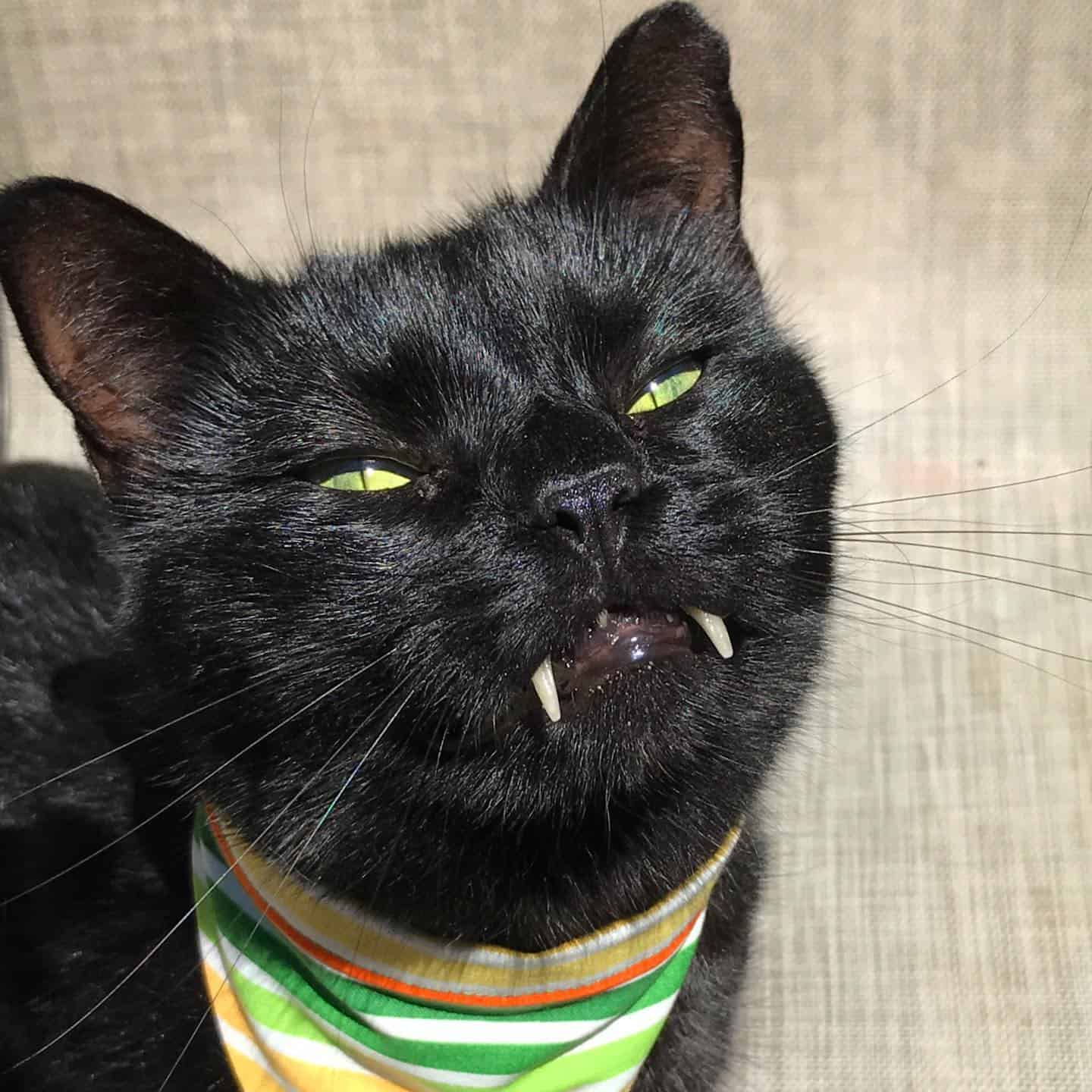 As Monkey grew, more of his personality started to show…and that wasn’t the only thing. Monkey’s teeth started growing, and it was clear that he was special in more ways than one. His canine teeth grew much longer than any cat Nicole had seen before. Slightly concerned, she took her vampire cat to the vet. She was relieved to hear that Monkey was completely healthy, and while it was rare for cats to have elongated canine teeth, it wasn’t unheard of. Monkey was simply special!

With his jet black fur and vampire teeth, it didn’t take long for Monkey to turn into an Internet sensation. Nicole says people often think she photoshops her cat’s pictures, but that isn’t the case. Monkey’s teeth are 100% real.

Monk, hanging out with his cool black cat housemate, Bean 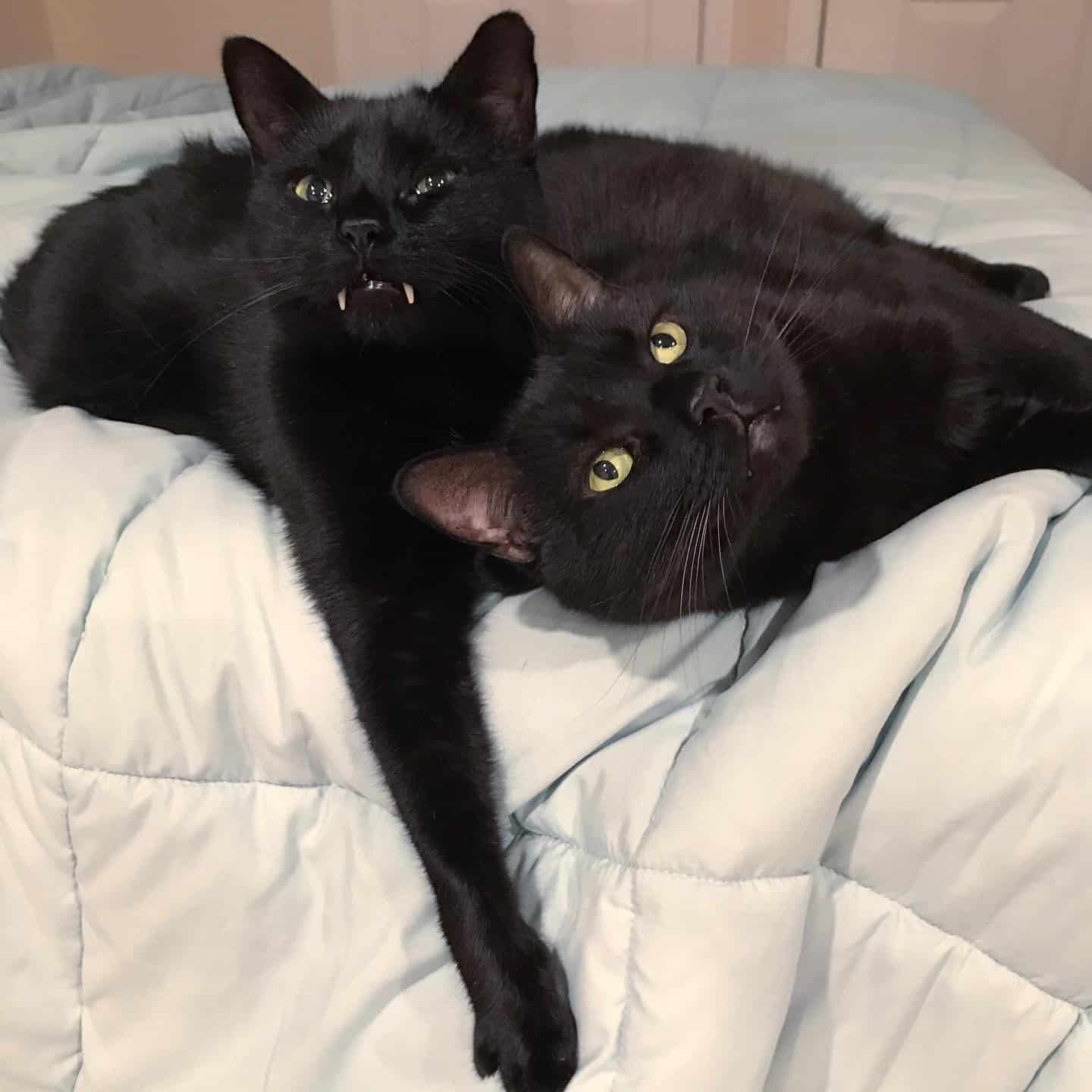 Instead of using his Dracula-like fangs to suck blood, this vampire cat is spreading a message that black cats don’t deserve to be stereotyped or cast aside. He and his brother, a black cat named Bean, have their own social media accounts that they use to advocate for underappreciated black cats. They post silly pictures that help spread the love for black cats everywhere. Can’t get enough of these super cool black cats? Check them out on Facebook and Instagram! And don’t forget to share them with anyone else you know who’s a sucker for black cats.

All Images Courtesy of Vampire Cat Monk & Bean on Facebook

Are you crazy about black cats? Learn more about them here in this fun video filled with fun facts about black cats, courtesy of the Cattitude Daily YouTube channel…enjoy!