Did you know that next to birds, cats have the widest range of vocalizations of any domestic pet? They’re capable of making over 100 different sounds, and every one of those utterances means something different. You’ll never hear your cat ask for more treats or tell you to back off in words that you understand, but that doesn’t mean they’re not talking to you.

A cat’s ability to make different sounds is a key part in how they communicate with humans and other animals. A meow is  never just a meow. And purring might not mean what you think it means. Here we break down a few common cat sounds to give you a better idea of what your talkative feline is trying to say. 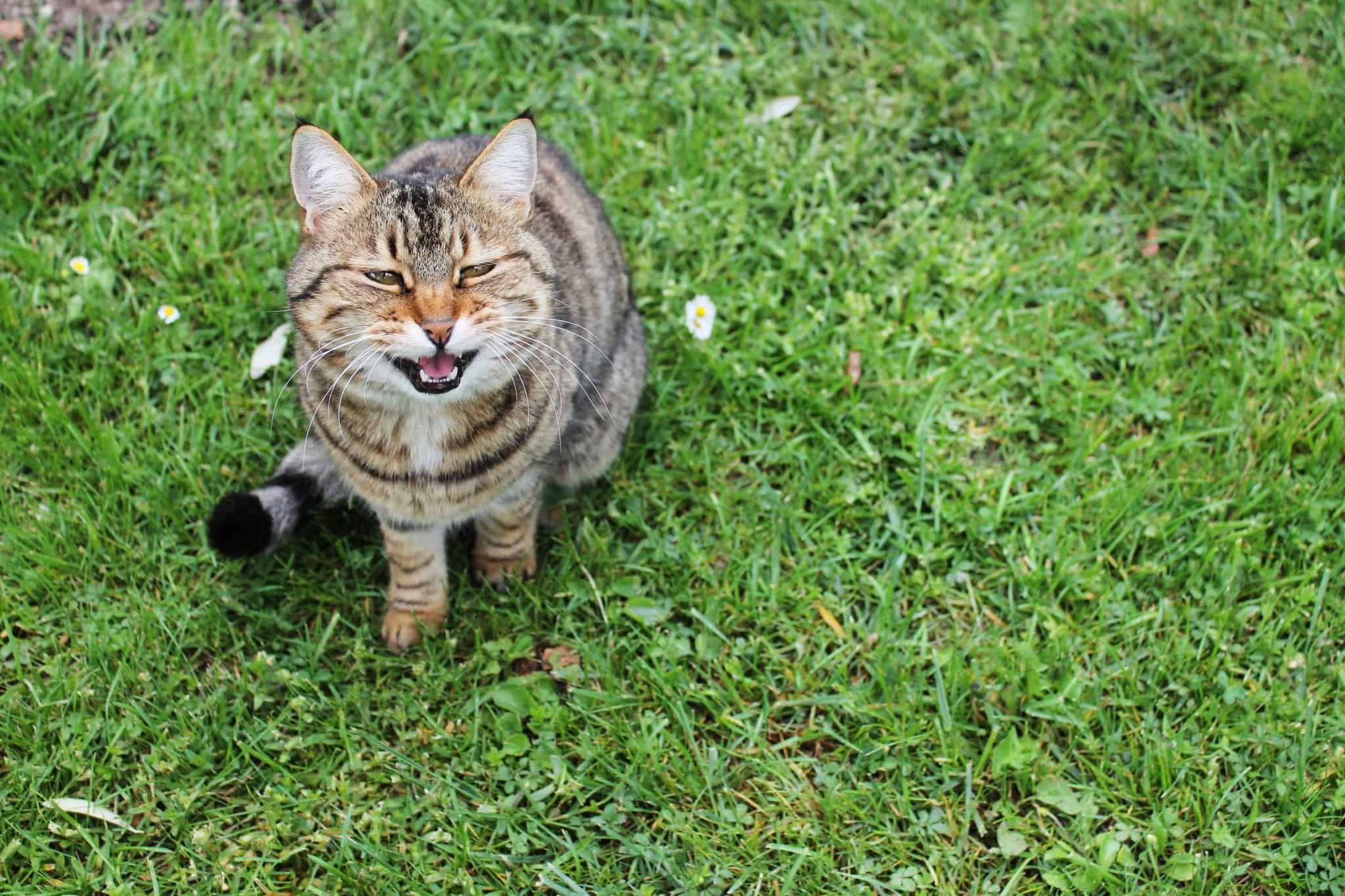 Let’s start with the basic meow. This is the sound you’ll hear the most from your chatty kitty. It’s the quintessential cat sound, but not all meows are the same. Kittens meow to their mothers (mostly when they’re hungry), but you’ll never hear your adult cat meow at another animals. Once they’re past kitten age, cats only meow when they’re communicating with humans. It might be because cats learned over generations how their meows can manipulate humans into giving them what they want. It could also have to do with how cats sometimes see themselves as our flesh and blood offspring. They rely on humans for their survival, just like a kitten relies on its mother.

Regardless of the reason, cats meow at humans usually when they want something. A loud, demanding type of meow could mean the cat is hungry. A quiet, pathetic sounding meow could mean the cat needs medical attention or is lonely. A long, raspy meow could indicate their annoyance at something their human is doing. Deciphering a meow will depend a lot on context, but thinking about the cat’s immediate needs is a good place to start.

It’s common knowledge that when a cat starts hissing, you better back off. More often than not, that hiss is followed closely by the claws. Hissing is a common cat sound that indicates the cat is either afraid, extremely cranky, or feeling threatened. It sounds a lot like food sizzling on the grill–expect a lot angrier and scarier. You can also identify a hiss by the accompanying body language that usually includes an arched back, puffed-up fur, and bared teeth.

In the dictionary of common cat sounds, a hiss is never associated with a positive message. But what the hiss means exactly depends on the cat. Some happy-go-lucky cats only hiss in extreme situations. Other, more cranky, cats hiss at even the most minor disturbances. For example, some cats start hissing if they even smell a dog in the next room. Another cat, however, won’t hiss until that dog has pinned them to the ground. Unlike meows, cats hiss at animals, humans, and even the occasional inanimate object. It’s their way of saying, “Back off, or else.” 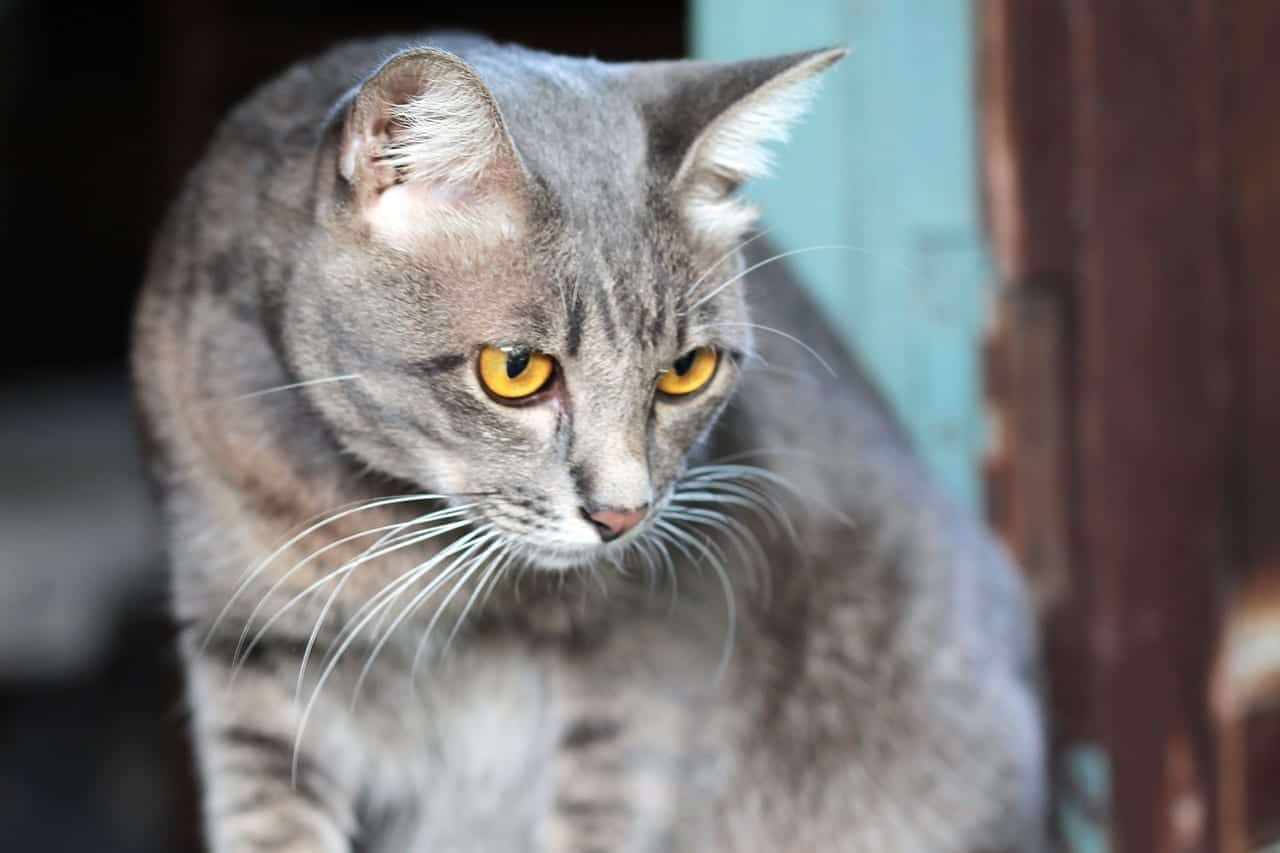 There are times when your cat might sound more like a bird. And ironically, a lot of those times are when your feisty feline is staring at birds outside the window or attempting to gain access to an inhabited bird house. Chirps, trills, and chatter are all closely related cat sounds. No, it’s not your cat’s way of becoming “one with the birds.” Cats also make this sound when they’re playing with their indoor toys or eyeing up the family hamster.

This cat sound is another one learned during kittenhood. Mother cats often chirp at their litters as a way to get their attention. In adulthood, cats make these sounds when they’re extremely focused on something and potentially want others to also pay attention. Chirps can also mean your cat is especially excited or wound up about something.

A yowl is one of those cat sounds you wish you never have to hear. It’s a type of elongated, mournful meow. Cats make this sound both when they’re communicating to another cat and when they’re trying to send an important message to humans. While the sound itself is hard to ignore, the meaning behind the sound isn’t always taken as seriously as should.

If your cat is yowling at another cat, it could mean a few different things. Some cats that aren’t spayed or neutered make a yowl sound when they want to mate. But they might make the same sound to tell a cat to stay off their property. Talk about mixed messages, right? If your cat is yowling at you or when there are no other cats around, you need to pay attention. It could mean that they’re injured or not feeling well. If your cat starts yowling on a regular basis, it’s time to take them to the vet. 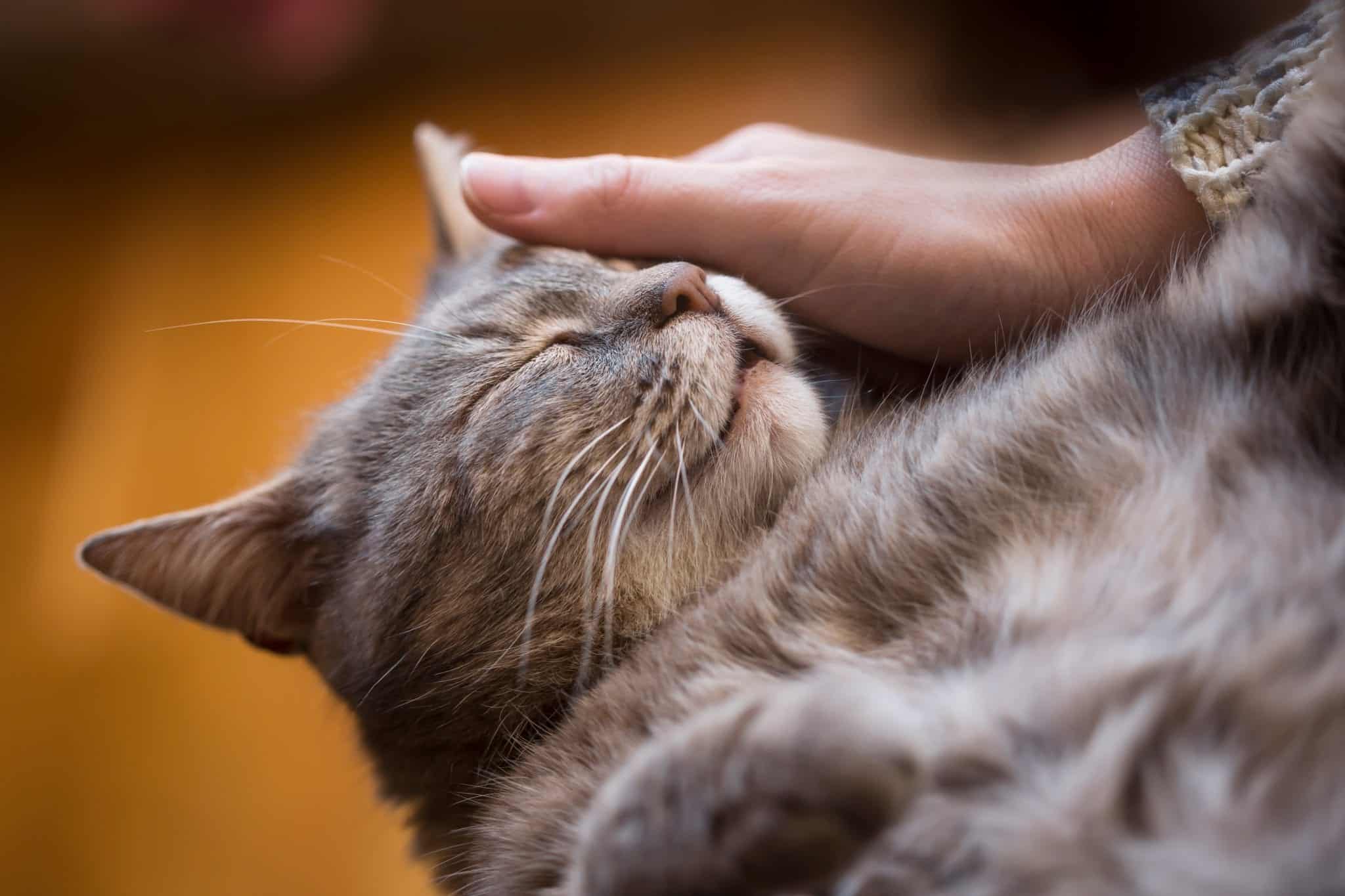 Purring is one of a cat person’s favorite sounds. It’s that soothing vibration and humming sound that cats make when you pet them in just right the spot. It’s always a satisfying feeling when a cat jumps into your lap and starts purring. It means you’re doing something right and that your cat is relaxed and comfortable. But did you know purring can mean more than one thing?

Web MD Pets says that cats also purr when they’re hungry or want something. This demand-purring has a slightly different tone than the happy purring we love to hear. A hungry purr often sounds raspier and more urgent. It might also be paired with a plaintive meow. It’s basically your cat trying to communicate with you by making whatever sounds they think you’ll pay attention to most.

These are only a few of the cat sounds that a life-long cat lover could hear on a daily basis. And like people, all cats are unique. One cat’s meow might sound different than another’s, and their sounds might have slightly different meanings. But in general, understanding cat sounds is about knowing the facts and paying attention to the context of the situation. Deciphering your cat’s language is a great way to improve your bond.

Tail Talk: What Your Cat’s Tail Is Telling You

Cats are notoriously complicated. One second they want cuddles, and the next they’re biting your fingers. It can be hard to discern what’s going on in their furry little heads, but you might be surprised to hear that cats are actually skilled communicators. They express themselves in countless different ways every day. No, they don’t actually speak to you, but felines find other ways to express themselves and send messages. One of those ways is with their tails. A cat’s tail is designed to help our agile friends keep their balance, but it’s also a big part of feline body language.

Whether it’s swishing, flicking, curved, or puffed up, your cat’s tail is trying to tell you something. Here’s a basic breakdown for deciphering that language. 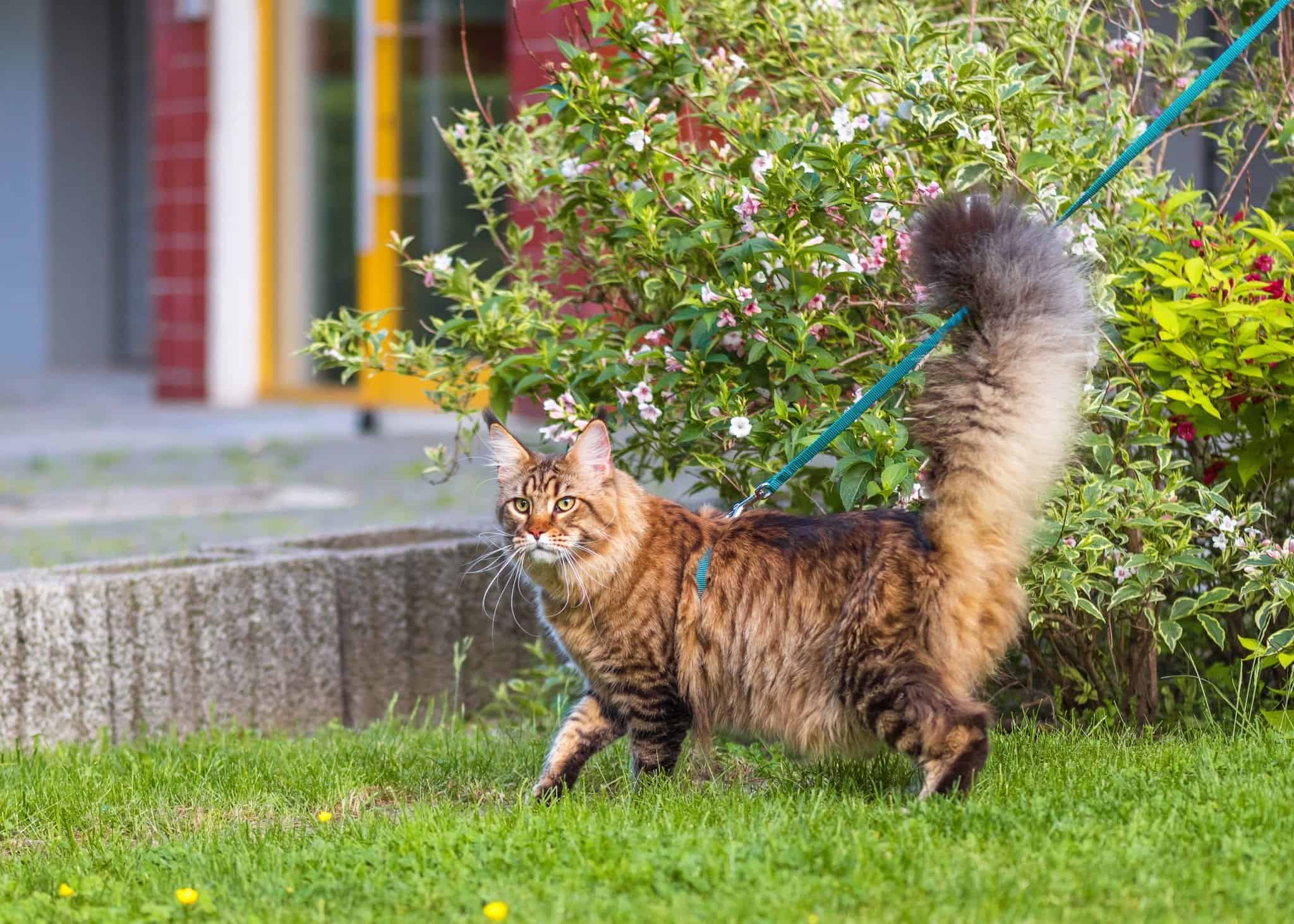 A cat that’s holding their tail in a high, upright position is confident and happy. She’s relaxed in her home and feeling good. When you see this tail position, it’s a good opportunity to lean down for some love. Your cat is in a great mood and is most likely willing to show people just how friendly she can be. If that high tail gives a slight twitch at the end, that could mean your cat is especially happy, and you’re doing something right.

Now that you know a high tail equals happiness, it’s easy to remember that a low tail position means you better watch out. Something is bothering your cat, and they’re not in the mood for games. A low tail can signal either aggression or a general bad mood. But before you assume the worst, consider your cat’s breed and normal tail position. Some cat breeds, like Persians, tend to keep their tails low for no particular reason. 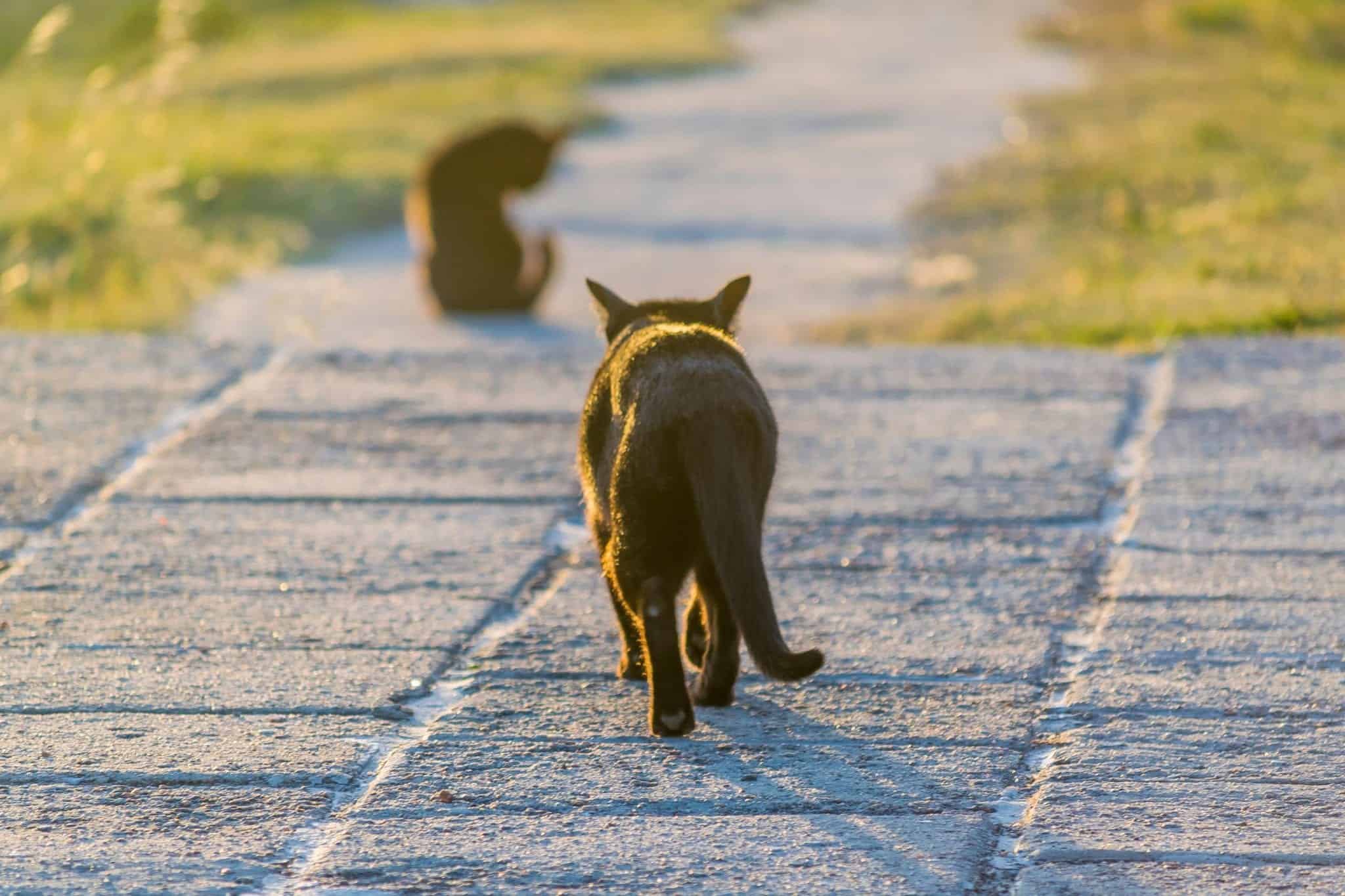 When your cat is feeling unsure or uneasy, they’ll often position their tail straight back and level with their spine. This doesn’t mean that they’re in a bad mood, necessarily, it just means there’s something on their mind. Their tail could be in this position for the first few minutes when a visitor comes into the house. And when they realize the new person is not a murderous villain, their tail will rise up into a happy pose.

Cats puff up their tails when they feel scared or threatened. The extra fluff to their tail makes them bigger and more intimidating in hopes of warding off whatever it is they’re afraid of. Sometimes it’s another cat they don’t get along with, and often times, puffy tails come out when there’s a dog around. Your cat might also puff their tail when you threaten them with bath time or a loathsome ear cleaning. 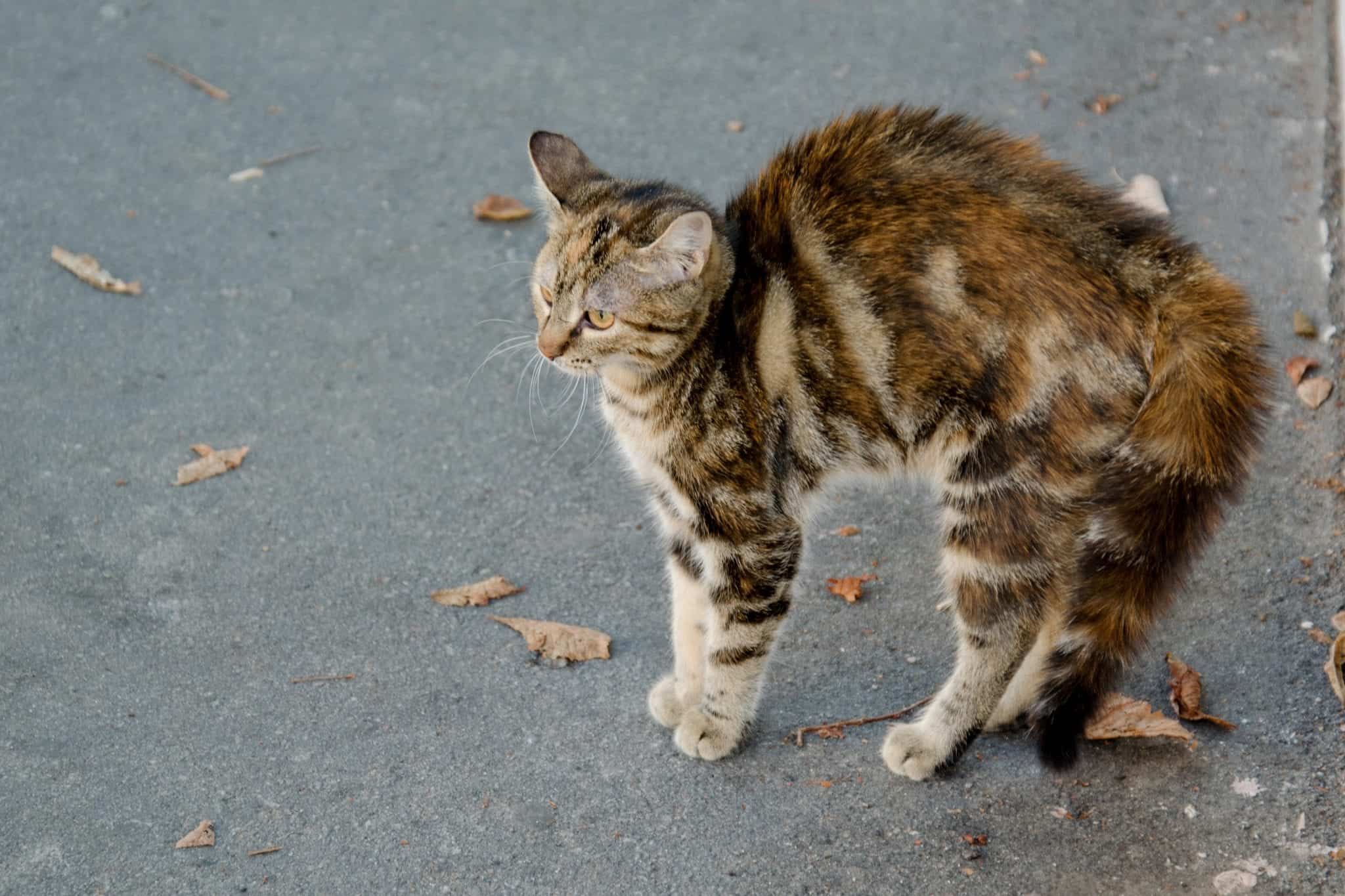 Curled Into a Question Mark

A curly question mark tail is a sure sign your friendly feline is ready to play. Cats often curl the tips of their tails when they’re feeling energized. It’s a great time for you to take a break from whatever you’re doing and bring out the feather wand. Cats need regular exercise to stay healthy, and playing with their humans helps them bond.

Swishing Back and Forth

When dogs wag their tails, they’re most likely happy and excited. But when your cat’s tail starts swishing back and forth, it sends a very different kind of message. Rapidly moving their tail back and forth is a sign that your cat is either afraid or agitated. They’re telling you to back off, and if you don’t comply, they might bring out the claws. In your cat’s mind, they gave you fair warning. So it’s not their fault if you misread their signals. 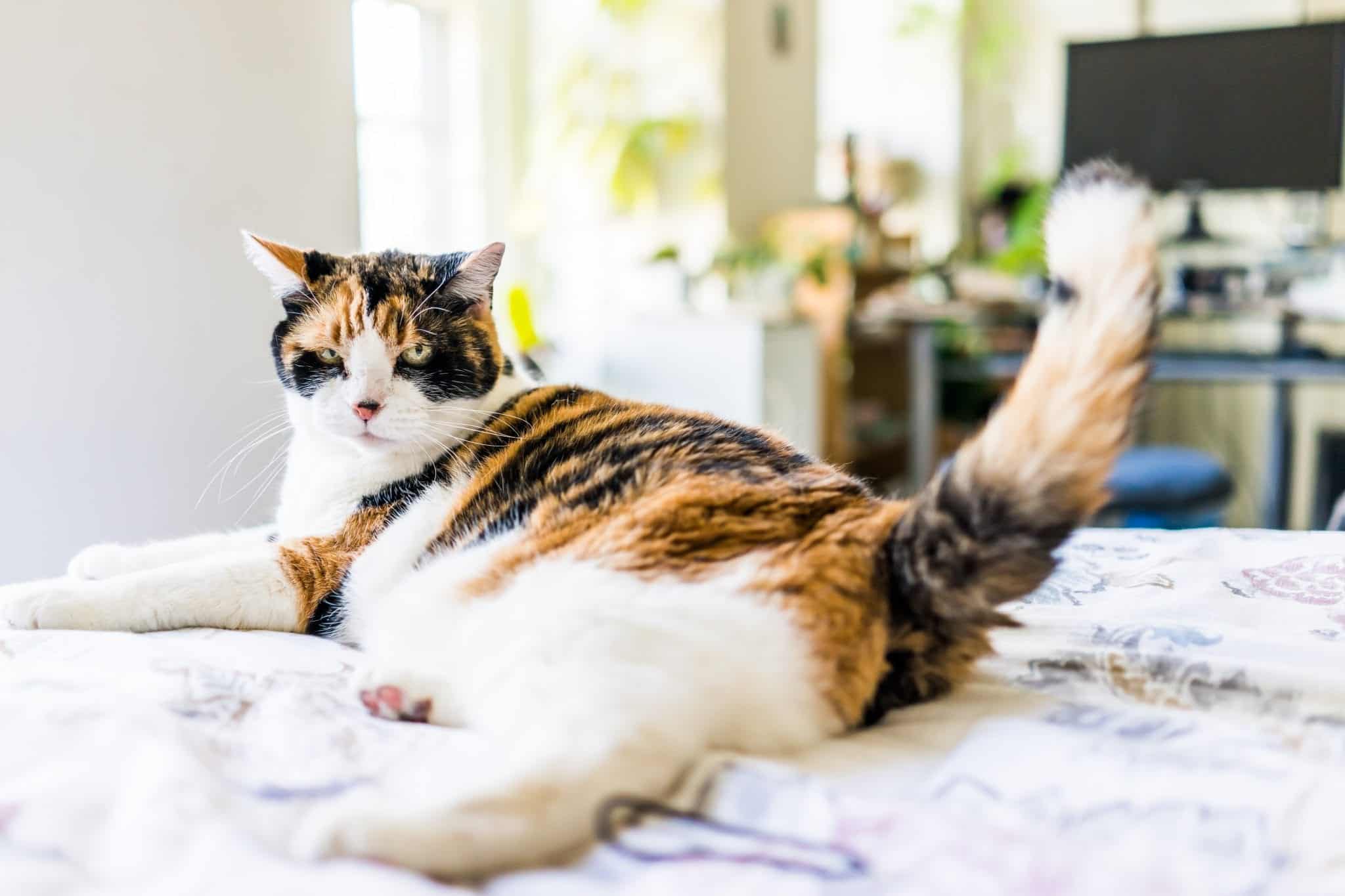 When compared to a swish, a sway or a twitch is slower and more concentrated. Cats often twitch their tails during playtime when they’re stalking a catnip mouse or feather. Your cat’s tail might also start swaying if they’re intently watching a bird outside the window. This tail movement suggests your cat is focused on something interesting. 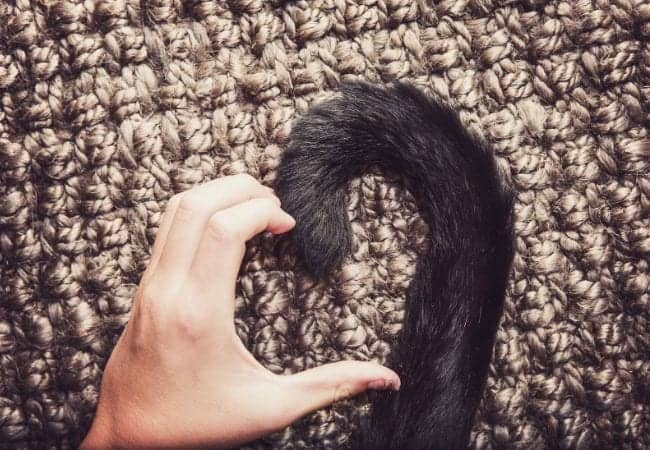 The trouble with tail communication is that it isn’t an exact science. If you want to seriously improve your communication with your cat, pay attention to what’s “normal” for them. Every cat is an individual, and with time and observation, you’ll learn exactly what your cat is trying to tell you. Understanding your cat’s tail will improve your relationship and overall bond.